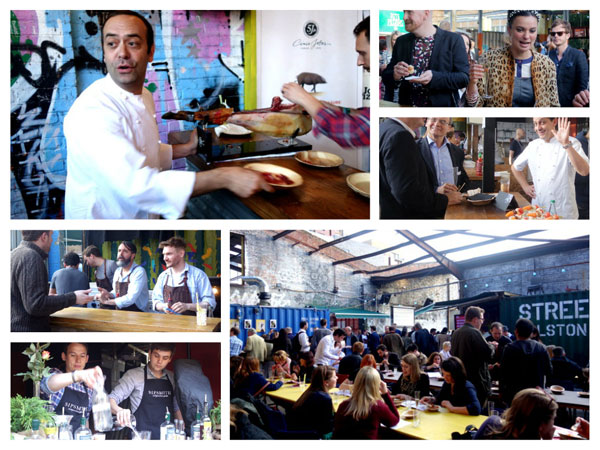 It's both one of the best nights in town plus a great online auction that we're always very happy to host - Auction Against Hunger is back again for 2015.

As ever, the auction will be in two parts - a special live event with Street Feast at Dalston Yard on 21 May with some of the best in London food showing off (and auctioning) their wares and an online ebay auction in conjunction with Hot Dinners the week before. Both, we think, are unmissable.

First off - the live event. It's being hosted by Street Feast once again and, judging by last year's event we think this is, by some margin, one of the hottest (and best value) tickets in town. For just £55, you'll be able to try food from any of the chefs (while stocks last) and from some of the best street food traders in town too. Plus there are stalls Champagne from Taittinger, Jose Cuervo pint-sized cocktails from Rotary Bar (which were - er - slightly lethal from Hot Dinners' experience last year) plus beer, wine and spirits too. As for the food, on the chef side, there's:

And the street food traders include:

And on the night, you'll be able to bid on prizes that include:

So put a note right now in your calendar for Tuesday 31 March at 11am, as that's when the 450 tickets go on sale for the event at Dalston Yard on Thursday 21 May. They will sell out, so cancel any meetings to make sure you're online to grab one. And you can get an idea of the event from last year's gallery.

As well as being an absolute bargain, all of the £55 will go straight to Action Against Hunger. Once they go on sale, you can buy tickets here.

In the run up to the event, there will be a week long online ebay auction that you can find right here on Hot Dinners. It starts at 12 noon on Thursday 14 May and runs for a week. As we get the details of the auction, you'll be able to find them here.