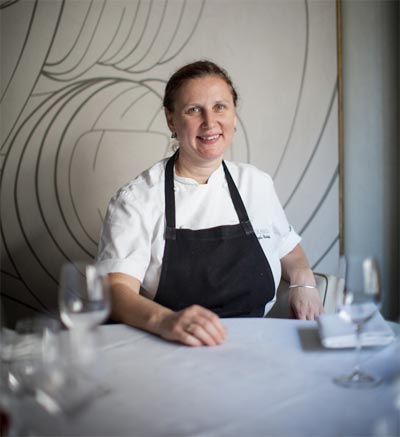 Not content with opening Merchants Tavern in Shoreditch and Hartnett Holder & Co in Lime Wood, Angela Hartnett is launching her second solo venture in the very building where she started her career. She'll be opening Cafe Murano at the former location of Gordon Ramsay's original Petrus in November.

According to Angela Hartnett herself, "Café Murano will offer regionally focussed dishes, at an accessible price-point, in a relaxed and informal atmosphere – the kind of restaurant I would enjoy eating in every day".

Much like the original Murano, it'll be an Italian restaurant, this time focused on Northern Italy in particular. In the kitchen will be Head Chef Sam Williams, who's worked with Hartnett at Murano for two years. So far, some example dishes that have been revealed include:

There will also be a daily changing ice cream menu (hooray!) with fig, Moscato, amaretto and pistachio all lined up alongside classic Italian desserts and a selection of cheeses, including parmesan and aged balsamic and gorgonzola with Barolo poached pears.

The restaurant, designed by Russell Sage (Grain Store, Social Eating House, Zetter Townhouse) will seat 75, with 12 more at the bar (which will be available for counter dining). You'll also be able to get traditional aperitivi and antipasti paired with classic Italian cocktails as well as their own creations.