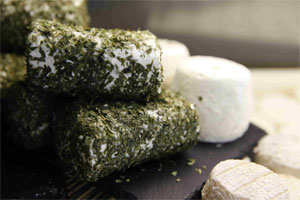 Now that Spring's finally here, jaded Londoners might be looking to spend an hour or two outside the city in the countryside. And while we've nothing against a nice walk in the countryside, unless there's a really good pub or restaurant at the end it's not usually our thing. What sounds much more up our street is the idea of combining a few hours outside the Big Smoke with a visit to a spanking new cheese market and hobknobbing with a couple of culinary famous faces to boot.

The newly-formed Cheese Makers Market will take place in The Market Place, Old Town Beaconsfield on Saturday 9 April between 10am and 5pm. It's being opened by none other than The Waterside Inn's Alain Roux and celebrity cheesemaker Alex James will be there, offering punters the chance to try his newest cheeses. The company behind the festival, Premier Cheese, is apparently responsible for the cheeseboards in all four of the country's three Michelin-starred restaurants.