A tale of two pies - Piebury Corner and Tapping the Admiral 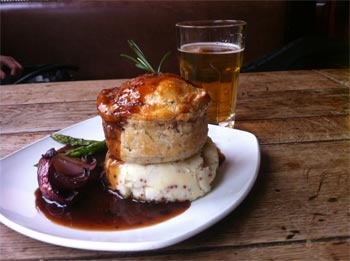 While everyone else around us seems to be counting the calories and steering clear of the demon drink, you can rest assured that here at Hot Dinners, we haven't lost our eye for a carb-loaded meal or two. Which is how we found ourselves trying out not one but two new pie spots in North London this week.

The first was relative newcomer Tapping the Admiral in Kentish Town. True, their chef has been in place for the best part of a year but we'd just heard about his lunchtime pie for a fiver menu, so we popped along to try it. Earlier in the year, the pub which has recently been refurbished was picked as one of North London's best boozers by none other than Forbes magazine.

James Spicer is the man in the kitchen and after coming back from having spent two years in Brazil was frankly desperate for some decent pie and mash. He couldn't find any round these here parts, so he started making his own.

We tried the chicken and leek pie and one of the day's specials - a vegetable and chilli pie. Both came perched on top of a generous mound of mustard mash and were served up with roast red onion and asparagus. For a fiver they're absolutely cracking value, when you consider how much lunch at Pret down the road would set you back. And if you come round on a Monday there's a whole day deal where a pie and a pint costs just £10 - a total bargain. 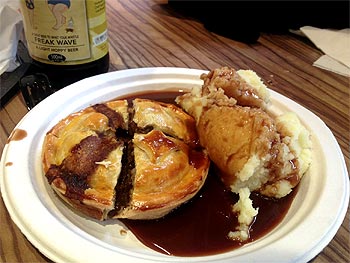 Next up was a trip to Holloway Road to see the first bricks and mortar place from one of our favourite street stalls Piebury Corner, which pops up for every Arsenal match at the Emirates. There's a lovely historical resonance to their decision to open a Pie Deli here where until many moons ago Williams Home Made Pie and Eel Shop used to ply their trade.

Billed as the UK's "first ever Pie Deli" Piebury Corner sell pies, pasties, scotch eggs and more with pies available to eat in or take away. For sides you can choose either Roast Tatties or Mash, topped with a ladle of their brilliant red wine gravy.

The shop has a slightly larger menu than the stall, so as well as trying our old favourite Steak and Ale - we also ordered a Ray Parlour which was pork, stuffing and apple. The pies are brilliant and all developed in-house. We can't fault them and loved the fact that this place is licensed which means we can now have their pies with some decent beers or ciders. And they even have mini sweet pies if you'd like to follow your main course with dessert.

Best avoided on a match day - unless you're going to the Emirates yourself - this is one to savour when the hordes of Arsenal fans aren't around. It's a great new asset to the Holloway Road.