[SIGPLUS_EXCEPTION_SOURCE] Image source is expected to be a full URL or a path relative to the image base folder specified in the back-end but /blog/2012/lombard/gallery is neither a URL nor a relative path to an existing file or folder.
0
Shares 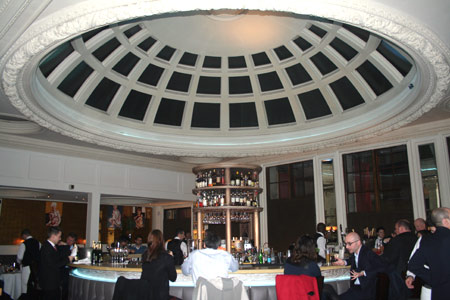 City favourite 1 Lombard Street has recently undergone a refurbishment and Hot Dinners popped down last week for a preview of the new interior and menu.

Opened in 1998 by former banker Soren Jessen, 1 Lombard Street was one of the early pioneers of large scale dining within the City. Having spent 10 years on the trading floor, Jessen was disappointed at how few restaurants were capable of seating large numbers. So, conducting his final trade, he swapped his banking job for the life of a restaurateur and 1 Lombard Street quickly became a firm favourite for City workers.

When asked for the reason behind the recent refurbishment, Soren tols us: “The restaurant hadn’t been refurbished for 13 years. It was looking a bit 90’s and the Scandinavian influence left it feeling a bit cold and minimalist. We wanted to introduce a bit of theatre to the dining here, and also more warmth to encourage our clientele to feel more comfortable and relaxed. It’s a stunning 160 year old room that just needed some help to enhance its existing beauty.”

There’s no denying the historical element of the building. Based directly opposite the Bank of England, 1 Lombard Street is where Charles Dickens used to stand and spend hours gazing up at the window beyond which his first love, Maria Beadnell slept. Maria’s father was the manager of the Bank of England at the time and he and his family resided there.

So, what’s the best thing about running a restaurant in the City? “We’re in the centre of world dominance, in a location steeped in history” Jessen says, “The breadth of appetite of people in the City is really exciting also. They’re always willing to try new things and new experiences”.

On the night we were served a variety of delicious canapés including three types of Oysters; Carlingford, Duchy and Prestige, all supplied by Wright Bros; Scottish Langoustine with Chorizo and Saffron Risotto, Duck Fois Gras; Veal Holstein with Capers and Anchovies, and our favourite, Tuna Tartare with Aubergine Caviar.

1 Lombard Street is open now for breakfast, lunch and dinner, and also available for private hire at weekends. Find out more at their website.