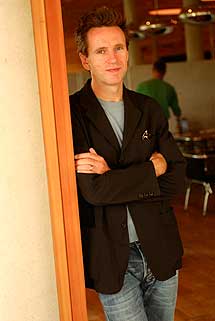 Oliver Peyton burst on to the London restaurant scene in 1994 with The Atlantic – a restaurant and bar most notable for its rare-as-hens-teeth late licence and red-rope door policy. Hot Dinners fondly remembers descending into the basement restaurant at lunchtime one winter and not emerging until the clubbing crowd started arriving.

Fifteen years later, and the hard-working, hard-partying self-made man is still just as driven, but he’s made a new, more sober name for himself with the restaurants he runs in some of London’s top museums and galleries, not to mention his populist turn on The Great British Menu. Hot Dinners met up with Peyton days after the opening of his latest venture, the Expresso coffee and churros bar at the British Library, to talk about the London restaurant scene.

HD: Why did you decide to move away from what many would perceive to be the glamour of standalone restaurants and move into the museums and galleries space?

OP: Well, I was watching Seinfeld at a time when we all thought London restaurants were amazing – near the end of his run – and he was making a joke about London restaurants and I thought "that doesn’t seem right to me". And I was thinking that the tourist view of London isn’t formed by their visit to a posh restaurant in Mayfair - it’s formed by what they eat at visitor attractions. Because galleries here are predominantly free, they’re much more interesting, because all sorts of people come to them.

My job is to accommodate people who want to spend a little or a lot of money. That’s a far bigger challenge than opening a posh restaurant, because you’ve got to keep everyone happy. The days that a gallery can just rock up with average long-life food from one of the big caterers is long gone.

And is it important for you that you’re offering British food in these tourist destinations?

When I was pitching for Inn the Park in 1994, they wanted to put a European cafe in there. I said you’re right by Buckingham Palace and Horseguards. It’s one of the most visited places in Britain, let’s do a British restaurant. But back then I was worried we wouldn’t find enough suppliers to go the whole 12 months of the year – things have changed so much. Now we bake our own bread, rear our own beef and 85% of the produce comes direct from the farmer. The interesting thing is finding farmers we can do business with and build up a long relationship with, perhaps change the flavour of the beef over two or three years . I love the restaurant business, but I only want to do things where I think I can make a difference.

Would you ever be tempted back to open your own standalone restaurant?

Yes, but I think the problem in London now is rent and rates are so high that many people operating smart restaurants never make a penny. It’s not like any other city, you have an awful lot of people, city boys, investing in restaurants who know nothing about restaurants. They’re divorced, middle-aged men who’ve fucked up their lives and now want to impress young girls. So they shove a couple of million at somebody and go "this is my restaurant". And then people go to those restaurants and see that they’ve got £10 glasses and Frette linen and think this is the new standard for restaurants in London, when in actual fact it’s the standard for nothing other than the financial abyss. So, I’m not against the idea but I’m not running around every street in London looking for the right place.

We did read you were going to open a hotel restaurant - is that right?

I was meant to be doing it in Cleveland Square with Guest Invest. They had a beautiful site on Inverness Terrace, a Grade One star Listed Building and I was going to put a French bistro in there, but they went pear-shaped owing me a lot of money. I’ve had a burning desire to do something in that building for years. I used to live round there 25 years ago. There’s about four or five buildings in London that I have a long-standing continuing nibble at.

What do you think of newcomers to the London scene like Polpo, Terroirs, Bocca Di Lupo...

I’ve eaten in all of them. I think Bocca Di Lupo is a very beautiful place, I love the room – I think it’s one of the best looking restaurants that’s opened in London for a very long time. But I think the food is average, not up to much – that’s my honest opinion. People love the room and haven’t cottoned on to that fact yet. I do like the fact that you can sit at the counter and look at the chefs – I think that’s going to be a much bigger trend in London.

They seem to be echoing the look and feel of New York restaurants.

Well, I go to New York quite a lot and I think the food is better in London by a long way. I think the days of when you considered New York as a place to go for food inspiration passed by about 10 years ago.

If I’m going to France I’ll use the Michelin guide, but I don’t understand why on God’s earth people use Michelin in Britain as a test of British restaurants and British food.

Although Manhattan trounces us when it comes to Michelin stars...

I’ve always said this about Michelin and perhaps this is why they don’t like me. If I’m going to France I’ll use the Michelin guide, but I don’t understand why on God’s earth people use Michelin in Britain as a test of British restaurants and British food. The whole concept to me is outrageous. The Michelin guide was born out of a particular type of cuisine in France and under no circumstances would I read the Michelin guide to Britain. It means nothing to me.

Part of my reason for having a good old rant about Michelin is that it’s made British people feel that for anything to be good it has to be foreign. You go down the high street and it’s got pizza this, boulangerie blah, pasta poopoo – it just drives me mad. Why is it that we have so little self-confidence? It’s upsetting.

Yet British chefs are still chasing the stars

The idea that British chefs should consider a French guide as some sort of yardstick of their skill is wrong. What I love is that in Paris at the moment, many of the smaller restaurants are copying London. I love that the cool restaurants in the outer region of Paris are reminiscent of what’s happening in the good gastropubs in London.

Was that the thinking behind the Great British Menu, to make Britain value its own cooking?

What have been the stand-out dishes from the programme so far?

Do you have a favourite London restaurants at the moment?

I always love The River Cafe and the Anglesey Arms in Chiswick. Hereford Road is my local – I like it there, it’s just very simple. I always say it’s one of those restaurants for people who live in Notting Hill but don’t like living in Notting Hill!

Back in 1998, you were quoted as saying ‘restaurants were part of feelgood factor of the nation’. That was in a boom period – do they hold equal importance when we’re in a downturn?

I’ve said many things in my times – some of them I don’t remember, although this sounds like something I would say! I just think restaurants are part of the whole social dynamic of our society. If you go to Paris or Milan, the restaurants there say something about how the city is. I think the London restaurant scene is still great – it’s stood up to these testing times really well. You have to be a lot cleverer about how you price your menus, what produce you buy and you have to be a lot more competitive so the people running restaurants in London are becoming much better at their job, at attracting customers, making good food, letting people know they exist. We should be proud of it.

It feels like it’s an exciting time right now.

There’s never not an exciting time in the restaurant scene. It doesn’t matter if World War III is happening around them, most restaurateurs wouldn’t notice – they’d be thinking "how’s my profit?" and "what were the figures last week?". People come to London to eat now. Foreigners come to London and dine out – to me, that’s great. People come because of the food. I think the restaurant scene is rocking at the moment.

And for Oliver Peyton, what’s next?

Well I’m particularly interested in coffee at the moment. It’s one of my little things. At the Espresso Bar we blend our own coffee, roast our own beans and we also produce our own churros with 70% chocolate. Every time I go into one of those coffee chains now, I get depressed. I’m also opening three or four cake shops in the next few months. I want to put British cakes back on the High Street. By and large there isn’t a proper baking chain anywhere in this country that’s British.