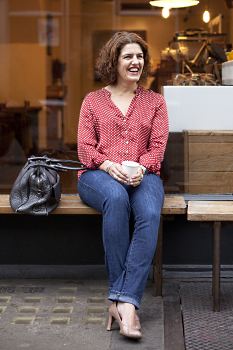 Saska Graville has worked as a writer and editor for over 20 years, both in London and Sydney. She was the features editor of The Sun-Herald newspaper in Sydney, before moving to London as deputy editor of bestselling glossy magazine Red. Her latest book, London Style Guide (which you can win a copy of here) breaks the city down by village, and reveals the places that the locals love, featuring interviews with some of the Londoners behind the shops, cafes and hotels. We asked her to tell us where she'd choose to eat, from all that this amazing city has to offer.

"Maybe I'm biased because it's my local, but The Chamberlayne in Kensal Rise really does do London's best roast chicken. (Ok, definitely biased.) The steaks are pretty good too. And the prawn cocktail… Sunday lunch: Bloody Mary, steak and chips… perfect."

Find out more about The Chamberlayne

"I know it had mixed reviews when it first opened, but I had the most delicious dinner at Granger & Co last week. Between four of us, there wasn't a dud course. After living in Sydney for ten years, Bill Granger's cafes were a way of life, so I was over the moon when the London one opened. One complaint, you can't book - hate that."

Find out more about Granger & Co

"There are so many great places to eat in Shoreditch, but it's hard to beat Pizza East. Delicious thin crust pizzas, cool interior and first class people watching, I love it."

Find out more about Pizza East