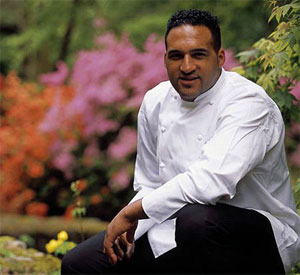 Michael Caines counts Raymond Blanc, Joel Robuchon and the late Bernard Loiseau among his personal and professional mentors. He recently celebrated having two Michelin stars for his restaurant at Gidleigh Park for the tenth year running, but he's not one to rest on his laurels. He's also Executive Head Chef of The Bath Priory Hotel and over the past few years has been busy building a boutique hotel empire with greeting card tycoon Andrew Brownsword. Hot Dinners managed to grab some time with Caines to find out why being master of his own destiny is so important.

Michael Caines is a popular fellow. Meeting him in the bar of the Grosvenor, just minutes before the Cateys – the industry Oscars for the hotel and restaurant trade – it looked as though we’ll never get the interview started as Caines is besieged from well-wishers at every turn.  As the head chef of Gidleigh Park himself puts it ‘I’ve  had two stars for ten years and I’ve been in the business for sixteen,’ so it’s clear he’s earned the recognition and respect of his peers.

Hot Dinners: Are you up for an award tonight?

Michael Caines: I’m not getting anything, but I was judging Chef of the Year (the award went to Angela Harnett) – it’s something I won in 2001.  It’s a good evening – our kind of Oscars I guess.

HD: You’ve been very vocal about how important it can be for chefs to be the ones running their own business, saying chef have been pawns for too long.

MC: The reality is I took control of my destiny because clearly no-one was going to do it for me. I have been employed at Gidleigh for 15 years and that’s a very long stint to spend in someone’s business and not have a share in it. After about six of them, I realised no-one was going to look after me and I had to try and create a business myself.

‘My real point is that businesses can change direction and people can be sacked without any reason because the powers that be want to change direction. Chefs are ultimately employees – they’re employed for their ability to do the job, but often they’re not appreciated for what they can bring to the business.  The independence of the chef is something that has, over time become very important to food culture. Chefs are now setting up their own business and restaurant companies; people like Ducasse, Bocuse and now Robuchon have become world brands. Ramsay tried to follow suit. Food’s a business and chefs as businessmen and restaurateurs should be seen as the norm and not the exception.

HD: Is a London restaurant on the cards for you?

MC: Of course we’ll come to London. I co-founded Abode hotels – a boutique chain of hotels which has food at its heart. London is very much a target – it’s a freehold we’re looking for. Andrew [Brownsword – who has an estimated fortune of £145m], my business partner, is looking for a long-lease or freehold. It’s a very interesting time. It’s not so easy to get banks to lend, so in that regard we’re very lucky. For us London is a key element, but we don’t have to rush to come to London to build a UK brand. Andrew and I are very ambitious and London is on the list – we don’t do anything by half measures. I’ll do it when the time is right for me and the business.

HD: You went on record this year as saying you hoped Michelin would be brave when it came to awarding stars in the UK? Do you think they were this year?

MC: To a degree they were, in the lower categories. I think Michelin is important as a historical guide that has huge significance and chefs idolise the guide for all the right reasons. But I believe that we do sometimes look too much to the guide. I think that Michelin are missing a trick here in the UK. If Tokyo can have twelve 3- star restaurants in one city and the whole of the UK has only three, then  in many ways Britain is being misrepresented.

It’s not for me to say why but I believe there’s an injustice. Even New York has more stars that London and the whole of UK together. The UK is an important market for Michelin and I’d like to think that in time some of that injustice will be put right.

HD: When you’re up in London, where are your favourite places to eat?

MC: I’m very privileged and I always want to assess and measure myself against other chefs to see my own progress and inspire myself. Angelus, Maze, Zuma, Barrafina and Fino – they guys there are doing a great job – they’re good fun. There’s so many, the Square is a great restaurant Philip Howard does so many covers every day, he’s very innovative with the workload he’s got.  I went to the Dorchester recently and had a good meal. Every time there’s a new opening or I hear of something that’s worth going to eat out I seek it out and try. Claude [Bocuse] has done a great job coming to London. Anyone that survives in this market, like Marcus Wareing with him leaving Gordon, has to be applauded.

'I’m a foodie and I enjoy eating well. But when I walk into someone’s restaurant it’s guaranteed that I’m generally going to have a good experience. But equally London isn’t where all the food innovation is about. London’s been hit by the issues in the city more than the wider UK. At Gidleigh we’re doing fine. We did 110 covers on Saturday night for fine dining. It’s not all bad news.

Find out more about Michael Caines at his website.