The Gospel According to Mark Hix 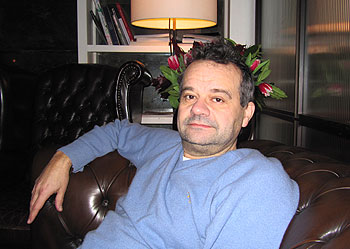 When Hot Dinners meets Mark Hix, the chef-turned restaurateur is on top form. The cast on his broken ankle has just been taken off, he’s off on a ‘little jolly’ the next day to Guyana to a rum distillery and he’s holding court in the downstairs bar of his newly-opened (and instantly successful) restaurant Hix Soho on Brewer Street. Our interview is constantly interrupted by a stream of friends and former colleagues coming over for a chat and a joke.

Clearly this man knows plenty about how to open a restaurant – he’s on the verge of opening one in Selfridges in the next few days (8 March) - his fourth restaurant in two years. We wanted to find out how he does it.

What can you tell us about your new opening in Selfridges?

It’s not going to be just British, it’ll be a little more European, so you’ll be able to go in and have a bowl of pasta or risotto. We’ll be open 9.30 to 8pm. There’s a lot more females who’ll be using the restaurant – so we’ll have lighter dishes.

Why did you choose Selfridges? Had you been talking to any other stores?

No, just them. We’ve been talking about it a long time with Selfridges, and it’s been a bit delayed actually. We were supposed to open last year, but they had to move the kitchen to a different position, so that delayed it. [Selfridge] are very good on food – they’re ahead of the game, the whole store.

Do you ever think that there could be one project for you which would be the straw that breaks the camel’s back?

Well you have to surround yourself with decent staff and delegate properly – like Kevin [Gratton – Hix Soho’s head chef ] – we’ve worked together for 15 years. So that helps massively. They’re the ones that are going to build the team and physically do the work and you need people you know and trust. If I was exhausting staff and didn’t have the staff and resources to do it, then maybe it would be time to stop, but there are plenty of staff out there who’d be happy to join the team, I think!

Phil Vickery told us you’d successfully put him off ever wanting to open his own restaurant with a cautionary tale about money and bonfires.

You can kind of tell who should and who shouldn't open a restaurant. It's crucial to have all that experience from kitchen to front of house.

There was four of us who had a bright idea to do a fish and chip shop just off the Harrow Road by Maida Vale, about 10 years ago. We did a high-end fish and chip shop which everyone loved, but was in completely the wrong area. It plummeted. We learnt that location is pretty important to the concept. I did it with three other partners who I didn’t know well and I should have done it on my own and spent less money on it. It’s a relatively low turnover business, so it was never going to make me a fortune.

So what is the key to making money in the restaurant business?

In a small single restaurant I couldn’t survive, but now we’ve got three and Selfridges coming on line, then it begins to work.

But isn’t there a danger you might spread yourself too thin, like Gordon Ramsay has been accused of doing?

The food Ramsay does is a very specific type of food – fine dining, fancy food whatever you want to to call it. And that sort of food – you wouldn’t go there two or three times a week. Whereas here I get customers coming in several times a week, because it’s easy-going food.

You had the kind of job many people would die for – chef director of Caprice Holdings, yet you decided to leave. Why was that?

I thought it was  time to move on and do my own thing – it was the right time for me. Everyone thought I was mad in the middle of the recession opening two restaurants, because the one in Dorset was about two months after the Chop House (in Smithfield). This site [for Hix Soho] came up and I couldn’t turn it down really. The previous owner had spent shed-loads of money on it - they’d spent £4m or something like that and I inherited that for not much money. When I walked in I just had a vision of how it should be.

Are you in the kitchen at any of your restaurants?

No. I’ve done that kitchen thing for the last 20-odd years and now for me it’s just having the vision to be the restaurateur and oversee it all and have it the ideas.

So who is it that puts together that idea of what each restaurant will be like?

It’s all me really. When I got the Chop House it was really the place that determined how it was going to look and the kind of restaurant it was going to be. If you haven’t got a site, it’s quite difficult to have that vision. For the shape of this building – this was just a sushi bar downstairs – I always wanted a clubby bar, so that fitted perfectly with this. It’s worked out well.

You were helped, of course, by attracting some of the best bar staff in town to Hix Soho – getting Nick Strangeway from Hawksmoor for example.

Nick’s opened lots of successful bars in London and he’s one of the best, more respected cocktail boys and I’ve known him for years. I don’t do bars, so I had to buy a bit of expertise in someone like Nick. He just said yes straightaway.

It's important to eat out in other people's places - crucial really. Otherwise you lose focus.

You’re pretty social – no-one has a bad word to say about you it seems.

Well you’ve got to be in this business. I probably have some enemies somewhere! It’s one of those nice things about the London restaurant business, is everyone getting on. It’s not about being competitive – it doesn’t work like that.

So how do you attract staff from other people’s restaurants and still all get along?

Was there a certain degree of serendipity in both you and fellow Caprice Holdings alumnus Russell Norman both opening places in this area on the same day?

I’d known Russell for years and we were both looking – so it was coincidental really. I think this end of Soho really needed a bit of a revival. In central Soho there are the places we all know about but certainly this end there wasn’t that much. 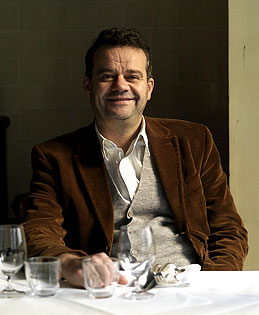 Where do you like to eat out in London?

I normally go scruffy really – I love Vietnamese, Turkish – Cay Tre, Viet Grill, Mangal Ocakbasi, Gourmet Sam on Bethnal Green Road. I’ve been going to Zuma recently which is very good and went to Sushi Say in Willesden which is very good – just an old-fashioned, local Japanese restaurant. I do to places like St John and I love going for dim sum.

Quite a few of the restaurateurs we've talked to don’t seem to eat out very much.

It’s important to go out and eat in other people’s places – crucial really. Otherwise you lose focus – it’s good to step out of your restaurant and look back in after you’ve been somewhere else.

Are you interested in Michelin stars or awards at all?

I think because St John got one last year [the Michelin Inspectors] are changing what they’re looking for. The Michelin guide used to be about recommending to visitors good places to eat, not fancy places to eat. I don’t care at all – it doesn’t bother me a bit – it’s more important looking after your customers and giving them what they want.

How do you divide your time between London and Dorset?

I normally escape down there at the weekends – Friday lunchtime I head down to the West Country, especially in the summer. That’s my escape really. It’s only 45 seats, got a great view and it’s near my hometown – so it’s like I’m giving something back to the locals.

The Hix Restaurant and Champagne Bar at Selfridges opens on Monday 8th March 2010. You can book a table by emailing reservations@hixatselfridges.co.uk or calling 020 7499 5400.