From Tuscany to Tinello – talking to Max and Federico Sali 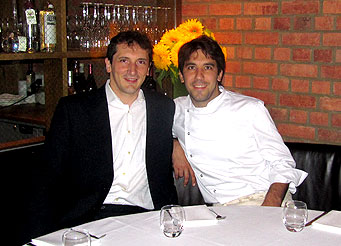 Brothers Max and Federico Sali arrived on the London dining scene in 1999. Max worked for 2 years at the three Michelin-starred Chez Nico, before joining Federico to work with Giorgio Locatelli at Zafferano in 2000. In 2002, Max and Federico moved with with Giorgio and Plaxy as they launched Locanda Locatelli, where they become sommelier and Head Chef respectively.

Hot Dinners caught up with them the week they opened Tinello, their first joint venture in Pimlico (and six weeks after Max became a father for the first time) to find out how this Italian restaurant was always going to be a family affair.

How did it all start for you – Federico, were you always food-obsessed as children?

Federico: It’s always been a dream for me to be a chef, since I was 14. I always told my father I wanted to go to catering school and be a chef. I loved to cook because he did. My mother did the normal meals – if it was a special meal it got cooked by my father. I was the first person in the family to go into catering but my parents were pleased because I knew exactly what I wanted to do.

When catering school was finished I went to work in a Michelin-starred restaurant near Lucca and from there I moved to Bath – Castle Coombe. I went to work in the Manor House Hotel when I was 21 – Max was already here. I came over and worked there for a couple of years and then went to work with Giorgio in Zafferano. I was two years in Zafferano with Giorgio - we did a couple of TV programmes together - and when Giorgio left he said ‘Why don’t you work with me? I’m opening a new restaurant.’ So I followed him.

The project for Locanda with Giorgio and Plaxy started – and Max joined us as a wine buyer and sommelier.

And Max – what was it about wine in particular that drew you into making a career of it?

Max: Working at Zafferano got me interested in wine. It was something I had before but hadn’t got really serious about. But gradually I developed my interest and when Locanda Locatelli came along Giorgio asked me if I wanted to be in charge of it. I started reading about it, and tasting. You try to develop your taste in wine and, being a buyer, you have contacts in the business you learn from. It’s really a very broad topic which you can develop in many ways. It’s also very important to learn what the customer wants in the market.

Federico: It’s very strange, when they go down to Italy on a wine trip, the sales of the wine producer they’ve been to see go – bam! It’s because they manage to transmit that passion to the client.

Max: When you leave with the vineyard on your skin and see exactly what effort has gone into it – you have an insight into what they’re doing in a better way. We always love to introduce new wines to our customers. Here we thought the wine list should be international because Italian restaurants mostly have Italian wine lists. I think being able to match international wine to Italian food was a nice challenge to take on.

It’s also notably how well-priced your wine list is. £4.50 for a glass of Prosecco isn’t bad for Pimlico.

Max: Yes, that was a conscious decision, because obviously you’ve got to be very careful how you price your list and to give a broad choice – we want the customer to come in and drink wine! We give people the opportunity to drink wine without going crazy about it.

Giorgio and Plaxy have financially supported you in this venture –  what did you learn from them when it comes to launching your own restaurant?

Federico: The determination of Giorgio and Plaxy together – the drive of the family business, to be able to create something in such a big city which is so close to what the business in Italy is. That’s what we learned from them.

Max: Definitely to be very understanding – they always gave me a second chance. What else?

Max: Honesty – that’s for sure.

Federico: And passion about what you’re doing that really drives into your cooking and running of the business. 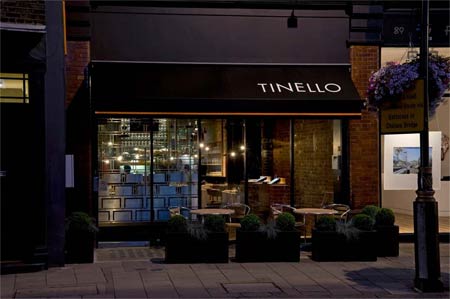 How long have you been planning to launch something like Tinello?

Federico: Well, this has always been our dream. [Max] wanted to be a chef as well but there was no room in the school so he decided to be out front. We didn’t really plan it. We were looking at restaurants with Giorgio and when we walked into this one it felt right straight away. And suddenly the idea of it being me and him in charge of it came along. It wasn’t really premeditated.

So you were looking at it as part of Locatelli’s expansion?

Max: We just walked into see the site and Giorgio said this should be for you and your brother.

How involved has Giorgio Locatelli been in the setting up of Tinello?

Max: He’s a major part of the idea behind this. He’ll come in and look at things and say, ‘Why don’t you do this, or try this?’ I’m always on the phone to them if I’m not sure of anything.

Tinello, though, is a very different kind of place to Locanda Locatelli – much less formal.

Max: Yes, we didn’t want the uptight, very technical sort of service – we wanted to approach it in an informal way and make the customer comfortable and at ease.

And did those intentions then inform the design of the restaurant?

Federico: Definitely. Tinello means the room next to the kitchen where you entertain family and friends – very informal. The lights here,  that’s what you use in the tinello in Italy – the brick, that’s like a farmhouse in Tuscany. So in a way we tried to recreate a bit of what we are here in London.

Federico: Absolutely. Most of the dishes on the menu are what we’ve been eating when we were little. When you grow older, your memory comes back and you go out to a restaurant in the country and you say; ‘Oh I used to eat this!’ and slowly you make it your own.

How authentic is the experience? Does everything come from Italy?

Federico: No! England is the best place to open a restaurant because you can find the whole of Italy here. In Italy they don’t buy any produce 20 miles away from where they are. Here the fish and meat is just great – there’s no reason why we should import it from Italy because it’s just fantastic here – we can get it direct from the boat in Cornwall. And obviously having been at Locanda and Zafferano – we’ve got some great contacts.

So what does have to be Italian? 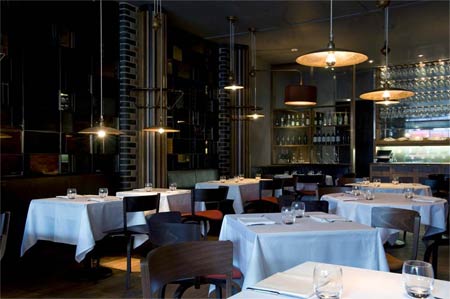 What do you think is going to do well on the list?

There’s a Roncaglia from Marche. Very fresh – it drinks extremely well. We sell a Verdejo from Spain which reminds me a bit of sauvignon in a way. Then we have the red Barco Reale Di Carmignano, Tenuta Di Capezzana – (‘It’s where we come from,’  - Federico). It’s a very underrated wine.

Things are obviously hectic right now, but when you do get a chance, where do you like eating out in London?

Federico: For Pizza – Franco Manca in Chiswick, that’s where we live. Hakkasan is my favourite place to be. Busaba, we love that. And we love to go to Nahm. When we go out , unless we eat pizza, we never go to an Italian restaurant.

And your last good meal in London?

Max: I went to this great restaurant called Tosa – a local restaurant in King Street in Hammersmith and it was delicious.

Federico: Probably J Sheekey’s– or Nobu. I went with my wife.

And what’s your driving force – your inspiration?

Federico: The kids – they are the next customers. We’re a very family-friendly restaurant [as we speak Max’s six week old baby is behind us in a pram] In 20 years, the children of our customers will be coming in saying "I used to come with my father" – that’s such a great thing. If you manage to get three generations of clients – you’re done! That’s what we’re looking for.