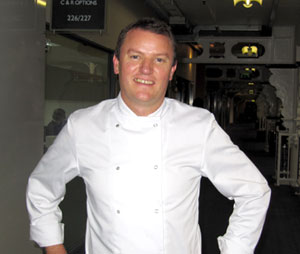 Theo Randall is one of a generation of chefs who were inspired by their work at The River Cafe under Ruth Rogers and the late Rose Gray. Randall eventually became Head Chef of The River Cafe for ten years. In 2006 he opened his own restaurant - Theo Randall at the Hotel InterContinental London.

Theo Randall: The restaurant’s doing really well – we had a very successful year in 2009, the last quarter was very good.

Business-wise, there’s no rules any more. The old quiet Mondays and busy at the weekend – that doesn’t exist anymore. We’re up on last year – but I think 2010 is the year everyone should be really careful, because it’s the aftermath of the recession we could go straight back into one, so everyone’s being more cautious.

We’ve noticed people aren’t spending as much money on wine and the average spend goes down a bit, but there are weird nights like when the private dining room is taken over and someone spends a lot of money and buy expensive wine. There’s still money around and being somewhere like Mayfair helps because you’ve got a much larger catchment area – you’ve got the corporate during the week, and then at the weekend we’re a destination restaurant.

Are you planning any extensions to the Theo Randall brand?

There are a few things in the pipeline, but nothing definite yet. Watch this space.

Does that mean you’re looking at new restaurants?

Not as yet, but I’m in negotiations looking at possible other projects.

Why do top chefs turn out for food events such as La Dolce Vita?

We’ve done it for four years – people come and taste the food and take away a card or a menu and the next time they go out for dinner or have sort of occasion, they’ll remember this experience. The first few years, we tracked how our business came in and we did very well out of La Dolce Vita and Taste of London. Taste of London’s a much bigger audience – we’ll definitely be there this summer.

Where have you eaten out well recently in London?

I’ve done very well this week. On Monday night I went to Le Cafe Anglais and there was a special dinner organised by Giovanni Manetti from Fontodi Wines and a chap called Dario Cecchini who’s a butcher in a town called Panzano and is very famous. They created a meal with Fontodi Chianti and his meat, it was a fabulous meal. And I had a very nice meal last night at Francesco Mazzei’s restaurant L’Anima – a beautiful restaurant, very stunning. I had a delicious meal of burrata with aubergine which was really good.

Read more about Theo Randall at The Intercontinental