Interview with Bjorn van der Horst of the Eastside Inn 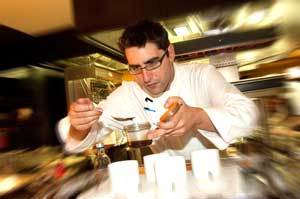 Swiss-born Bjorn van der Horst was raised in France and trained in the kitchens of some of the world’s most famous chefs including Joël Robuchon and Alain Ducasse. As chef patron at Gordon Ramsay Holdings’ La Noisette in Knightsbridge, Bjorn won a Michelin star within six months of opening. In May 2009 he opened the Eastside Inn on the site of Vic Naylors. Bjorn’s wife Justine, whom he met while working at Connecticut’s Gaia – is the Eastside Inn’s restaurant director.

You’ve just been voted most on-trend restaurant by Olive magazine – what’s your reaction?
‘ I didn’t know that, that’s fantastic. I don’t know what trend they’re talking about. If the trend is something that sets a precedent that people follow, that’s very good news. If you notice the new openings like Galvin and John Torode in Spitalfields, they’re all doing the same kind of concept [as Eastside Inn] – I’m not inventing that though!’

So what were you setting out to achieve with the Eastside Inn?
What we wanted to achieve was to be a restaurant of a certain notoriety where the owners are there, greeting people as if they’re coming into our home. The most important aspect of what we’re doing is that we’re here to greet you and take care of you as a guest in our home. Whereas in so many other restaurants you go to, there’s the chef’s name on the door but they’re not really there. We really wanted to be there for people.

The restaurant opened much later than expected. What caused the delay?
Well we signed everything in August and then the world came crashing down on all of us. So it slowed everything down. We postponed all the building and construction work until January so we used those months to go back out to tender and see if we could get better deals on the construction. Then we just took time to see what was happening with the market and readjust our forecasts and budget. We were committed, it was just a question of rethinking the business plan and saying ‘this is what we’re going to do.’

A lot of people are talking up the restaurant business in London. Is the economic crisis over for restaurant-owners here?
There’s definitely year-on-year more people eating out in London, that’s for sure. And it’s getting similar to New York where no-one eats at home or very rarely – so that part is definitely exciting; it’s building business.

I think the high-end restaurants are suffering because they’re not offering a high end product. That’s my interpretation. If you’re going to go and spend £60 or £75 on three courses in a one Michelin-star restaurant in London it’s overpriced for the product that you’re getting. Often you’re in a very beautiful setting, but you’re getting something similar to what you would get in a bistro – just slightly more worked.

What was interesting about doing the two separate places [at the Eastside Inn] was that you realise why we have those high prices in the restaurant is because we’re serving turbot or grouse. These products are expensive, but maybe people don’t know that they are.

Are there any trends in London that you've identified?
The exciting thing that’s happening in London is this new crop of nice little bistros like Terroirs, Bocca di Lupo and Barrafina that are attracting people to go out a bit more. 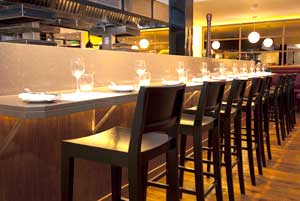 And what about London’s restaurant-goers? Have we changed at all?
The one change I’ve seen in the last five years is Londoners becoming less and less British. Five years ago I would have guests that would come in and not be extremely happy - but they would leave and smile and say everything was fine and then you’d get a letter or email three days later saying they weren’t so impressed. This would never happen in New York where people would tell you and then you could fix it and make sure they had a great time. Londoners are definitely becoming more demanding as far as what they expect on their plate and they tell you directly, which is great for us as restaurateurs because we’re able to fix the problem right away.

Londoners also understand more and more the value for money aspect on what they get on the plate – maybe they go more to markets and they read more. People have more of a sense of what things cost and seasonality, when they should be eating something. You see that in the wine selections - people don’t just go for tags they’re happy to be enticed to try something out of the ordinary, taste something different. People are definitely more adventurous.

What’s on the menu now you couldn’t have had five years ago?
Now we’re putting lambs brains on the menu which probably was only being done by Fergus back then, you wouldn’t have seen lambs brains or calves feet before Fergus [Henderson] and then the Galvin brothers put it on their menu at the Bistrot – these are the kind of things you’re more able to do.

Why did you choose London as the place to open your first restaurant?
We fell in love with the city. I’m French and Justine’s Canadian so London seemed like a good balance between the two. We love this neighbourhood too.

Did it take you a long time to find the right location for the Eastside Inn?
I looked at all the traditional classic fine-dining environments – Chelsea and Kensington and Knightsbridge and Fulham and thought that’s not really who we are, that’s not us at all. We didn’t want to go too far east so we started looking around Clerkenwell and fell in love with the market – it’s such an amazing building. The architecture around here reminds us of in Brooklyn and the Flatiron district. The people too – there’s the City close by and designers and then there’s real blue-collar workers who work in the market and we enjoy that.

Obviously opening your first restaurant is a huge learning curve. What were the key things you learned from that experience?
The big thing we learned was the building aspect of it – all the construction that goes with opening a new restaurant. That’s not our profession so the most important thing is to surround yourself with the right people. I think the next time around we’d do a much bigger bar. The one thing that was completely silly that we didn’t do was a big, big bar. There’s a reason why all the restaurants in New York have one – it attracts people.

So you’d consider opening another restaurant?
If this one works – why not ? I’m pouring out with ideas and things to do but I’d definitely have a big crazy bar scene. 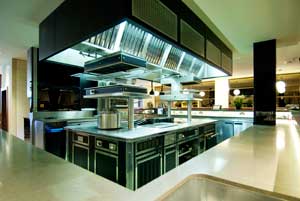 We were recently talking to chef Michael Caines who was bemoaning the fact that New York has more Michelin stars than the whole of the UK. Why do you think that is?
I just think there’s more better restaurants there. Simple as that. There’s more innovation in New York as far as the food goes, there’s more understanding of terroir, there’s less fussiness on the plate, there’s less ego the kitchens – much less. There’s none of these angry chefs in the kitchen yelling at people like Gordon Ramsay. It’s just put your head down, get the work done and get the food on the plate. The kitchen here is wide open to everyone – so it’s really calm in here. And I’m not a yeller or a screamer – there’s no need for that. When you’re in control and everyone’s doing their thing, there’s no need to yell or scream.

Where are your favourite places to eat in London?
We have different favourite places for different occasions. When we have friends from out of town and we want to show them a good time and we want to go where we’re guaranteed we go to the Tiroler Hut in Westbourne Grove. Joseph there has been running the place and doing his thing for 40 years. He’s there every night playing his cowbells in his lederhosen, it’s one of those places you go more for the atmosphere than the food – obviously. I love taking parents to Rules just for the good old Englishness, but otherwise we tend to try all the new bistros like Terroirs and that’s where we enjoy ourselves the most. I’m not one of those chefs who once a week has to go and eat out at my competitors’ restaurants.

What else are you working on at the moment?
Well we’re closed on the weekend, so I do have that time. My main concern is making sure the restaurant is healthy and people are enjoying themselves when they’re here. I’d love to do a book – but I don’t think I’d do a traditional cookbook – I think I’d have a little more fun with it.

The Eastside Inn is open Monday - Friday. Click here to read what reviewers thought of it and for contact details.