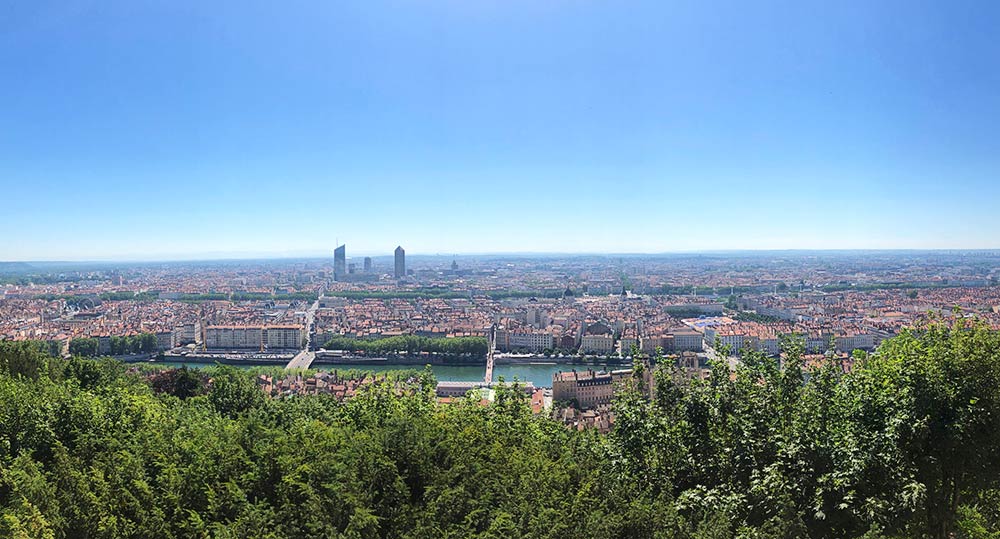 The view from the Basilica (post funicular ride). It was a bit warm that day.

We took the Eurostar direct to Lyon which is a brilliant way to get there, making the journey part of your holiday. The trip takes just over 4.5 hours on the way out and slightly longer on the way back as you have to disembark briefly at Lille to go through passport control (if you change trains at Lille, only going on the Eurostar from Lille to London - that can speed things up on the way back).

Prices start at low as £51 for a single journey in standard, but if you can we'd strongly advise you to upgrade to Standard Premier for a trip of this length. On our morning train out, that included a small continental breakfast, and light lunch before arrival at Lyon. On our return trip, we had dinner (and wine) on the way back to London.

Best of all, when you arrive in Lyon it's just a 15-minute hop on the metro to the centre of town.

Lyon's pretty well set for public transport. A carnet of 10 tickets sets you back 16.20€ and each of those tickets can be used as many times as you want within a one hour period on buses, the metro and tram system. That also covers the cost of the funicular ride up to Fourviere. A lot of the central area is easily coverable by foot too . 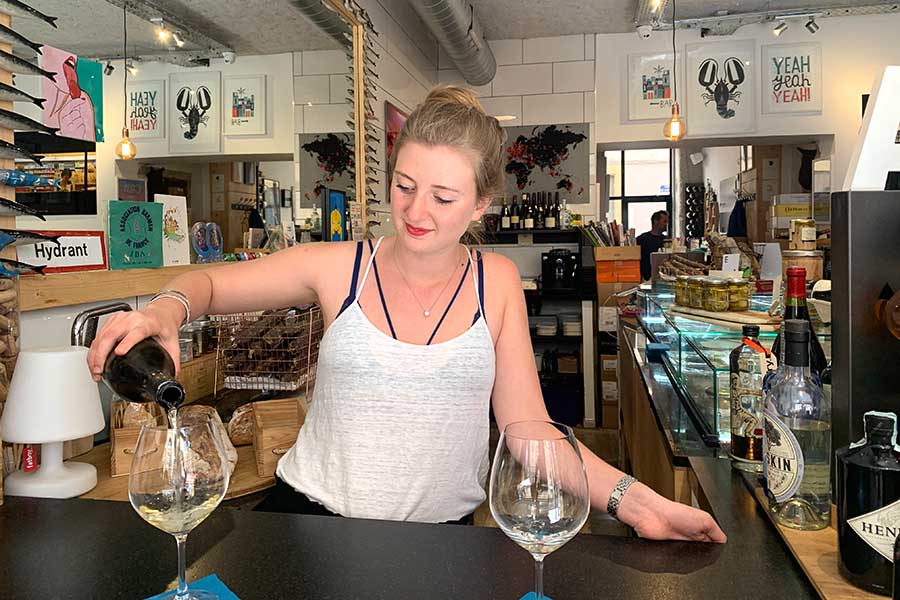 Propping up the bar at Muraato

On almost every street you'll find somewhere to try or buy the local Rhone wines. Guyot Cave de Saint-Antoine is a good bet - you can do tastings here, and we thought there were plenty of wines at a reasonable price too.

Other wine bars we tried included...

This was a handy pitstop before dinner at Cafe Comptoir Abel (see below), right beside the Abbey of Saint-Martin d'Ainay. They have a daily changing list of wines by the glass, and we were asked what we liked and poured a glass of something accordingly.

Hands-down our favourite wine find was Muraato - a self-styled food and wine boutique on specialising in Corsican charcuterie. The owner Guillaume is crazy both about his cheese and the small scale producer wines he stocks. We spent a happy hour working our way through both. 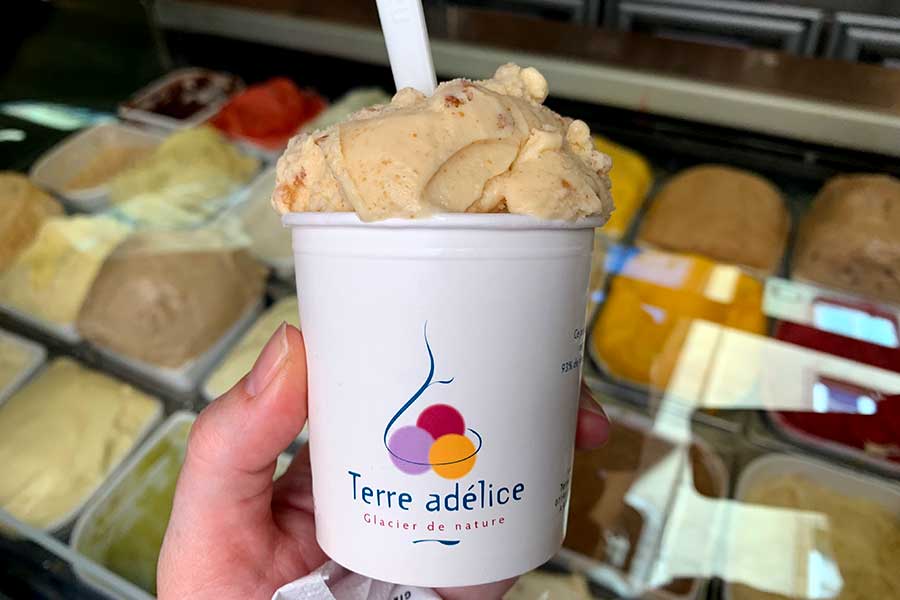 There are a few places to try great ice cream in Lyon and a couple of them are very close together in the old town...

The temperature didn't drop below 31 degrees the whole time we were in Lyon, so knowing where to find a good ice-cream became a matter of urgency rather than simply a nice treat. Terre Adelice is on the main drag in Vieux Lyon and has a huge range of ice-cream and sorbets to choose from. There's everything from foie gras, orange blossom, madeleine and thyme. We went for a scoop of rice pudding and one of smoky bacon in one pot and prune & Armagnac in the other. Given more time we'd happily have returned for the mirabelle plum sorbet.

You can't come to Lyon without trying one of these uniquely Lyonnaise bistros serving up local food and wine. We made it to two during our weekend break.

One of only 23 in the city to be denoted a true bouchon by the Chamber of Commerce here, this restaurant in the heart of Vieux Lyon is enough off the main street to not be a 100% tourist-packed affair. Although if you're in a group, there's a rather lovely stone vaulted cellar that's good for larger tables. We didn't book but just popped in here as a walk-in. 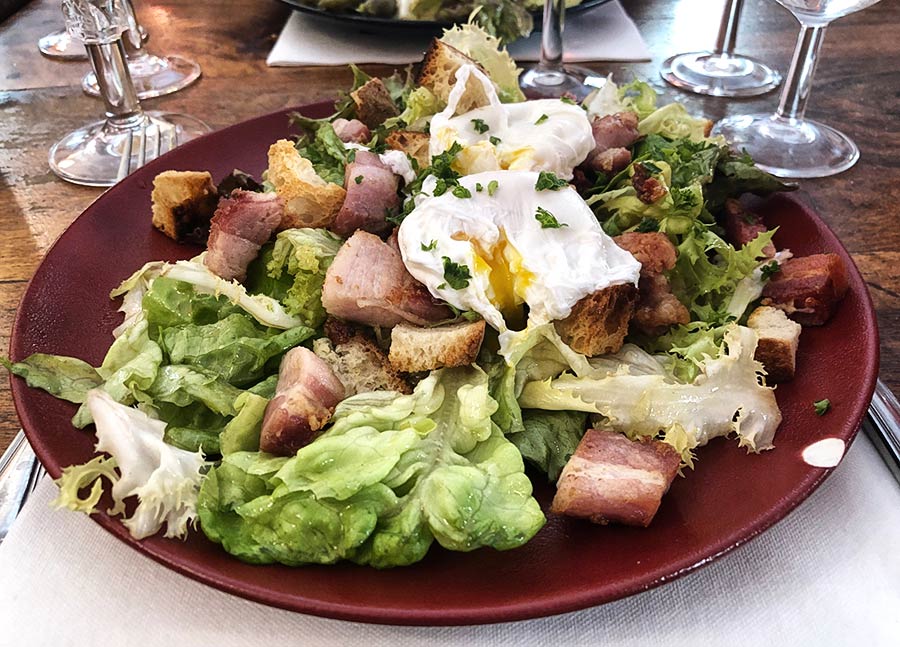 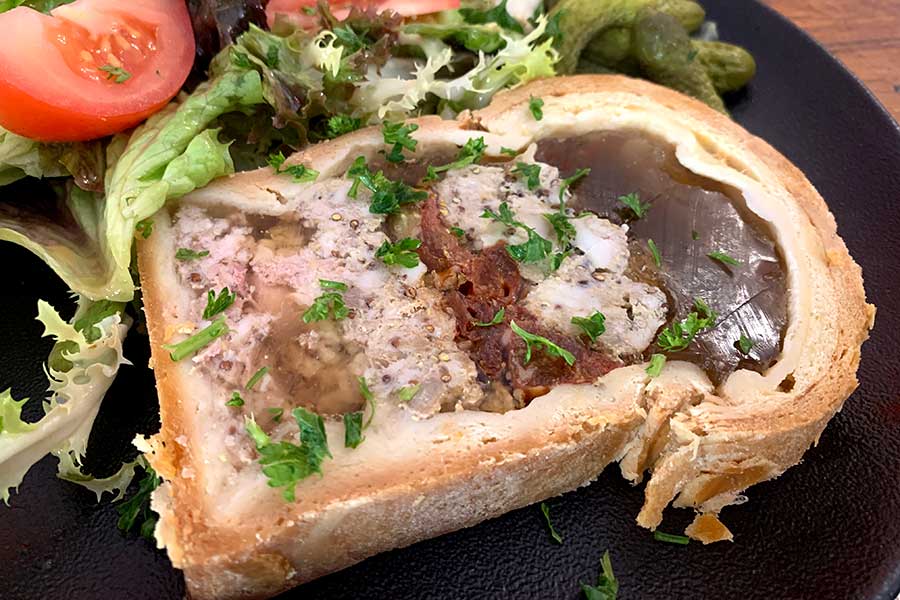 This is definitely a book ahead spot. We booked a week in advance for a table here at 7.30pm, arrived to an empty dining room (one of three here) that filled within minutes. This longstanding bouchon has been around since the 18th century and really looks the part. Even the head chef has been in situ since the 70s. Once again the food is pretty heavy on the meat, offal and cream. On the upside, there's also air con which was a bonus in this heat. 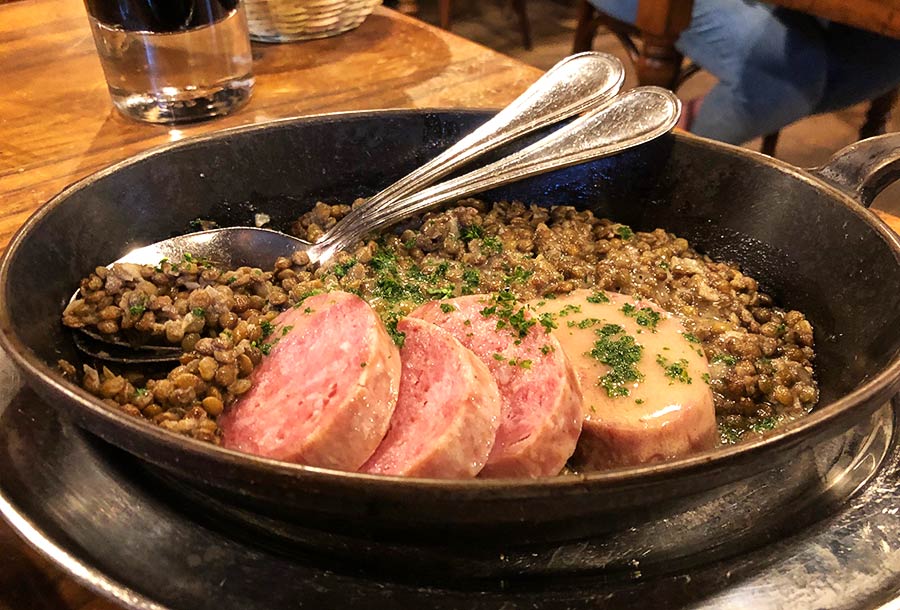 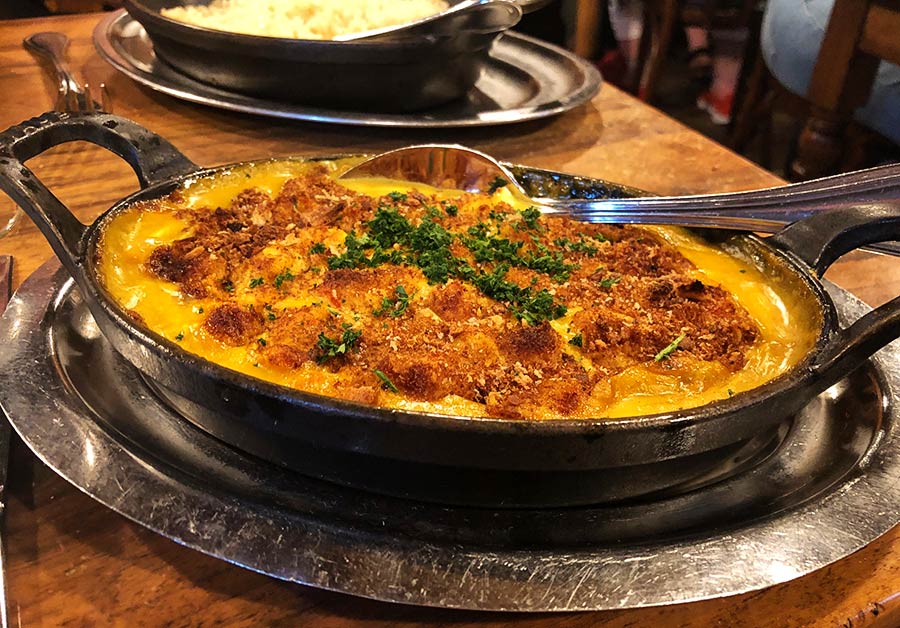 Gratin d’écrevisses aka crayfish gratin (25€). They do like their cream in Lyon.

Bouchons may be what Lyon is known for, but there's also plenty of opportunity to push the boat out. We didn't get a chance to do that sort of dining this trip, but here are some you might want to look at booking.

Chef Mathieu Viannay now runs the show at this legendary Lyonnais restaurant - one of the first to get three Michelin stars in Lyon back in 1933. He currently holds two Michelin stars. Be warned, this really is pricey - a main course of Poulette de Bresse et Homard Bleu en Cocotte for two will set you back 220€. 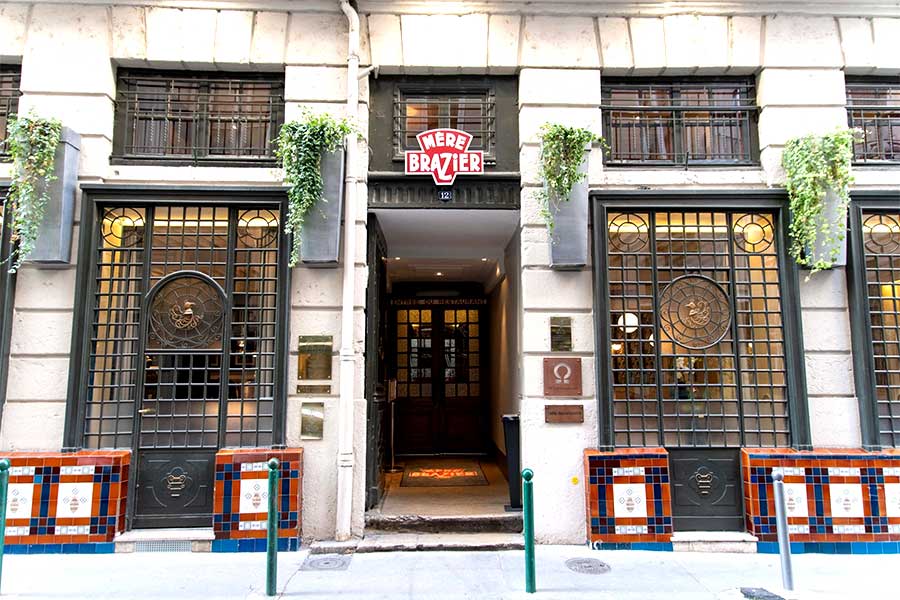 All we're saying is that if you did happen to be looking for somewhere to pop the question, we can't think of a more romantic restaurant than this - set in the covered 14th century traboule (courtyard) of this five star hotel. The Renaissance menu at 105 euros is pretty good value, all things considered. 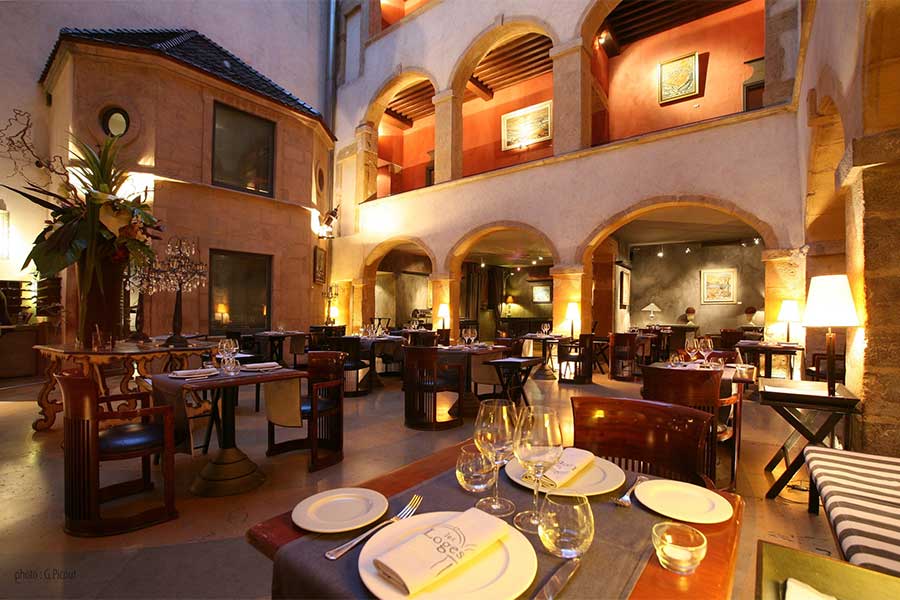 The best thing about coming here via Eurostar is that you can bring a nice big coolbag and come to Les Halles Paul Bocuse on Sunday for a huge food shop followed by lunch before you head home. This massive food hall features everything from the best cheese shop in Lyon (Mere Richard) to places selling pates, fresh veg, macarons (Maison Seve), pastries, bread and wine. We wanted to buy the lot. If you're here on a Sunday do the food shopping first as the stalls close at 1pm but the many restaurants don't shut until 4.30pm. 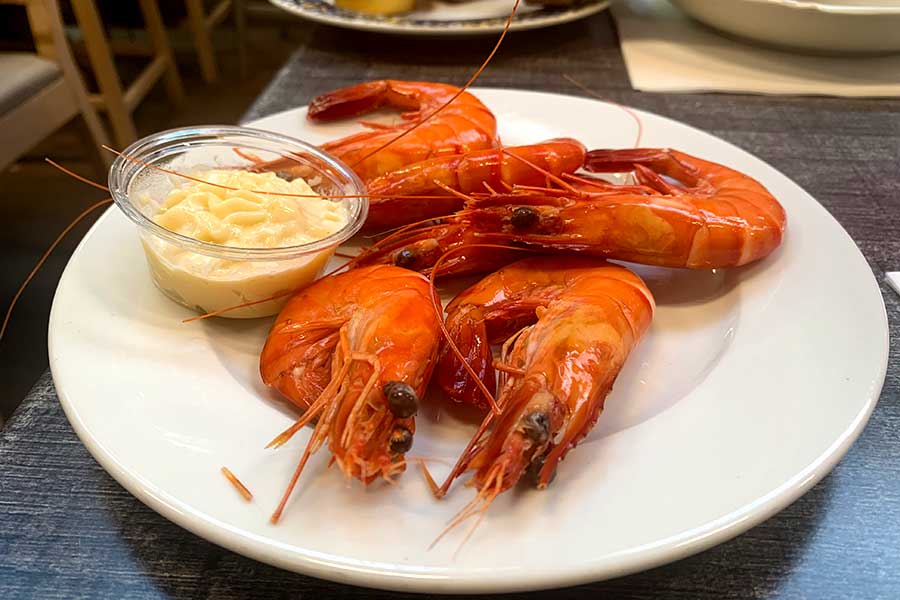 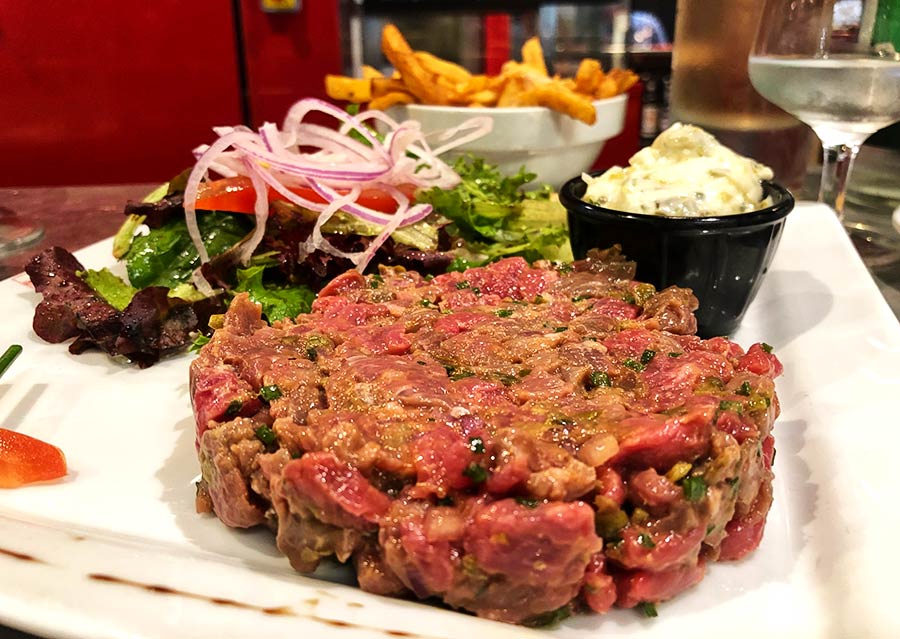 We stayed in the just-open InterContinental Lyon - Hotel Dieu. Find out about our stay here.