[SIGPLUS_EXCEPTION_SOURCE] Image source is expected to be a full URL or a path relative to the image base folder specified in the back-end but /blog/2015/hampshire/gallery is neither a URL nor a relative path to an existing file or folder.
0
Shares

Vineyards, trout fishing, buffalo farms - it's a foodie paradise in Hampshire and very handy for an overnight trip from London 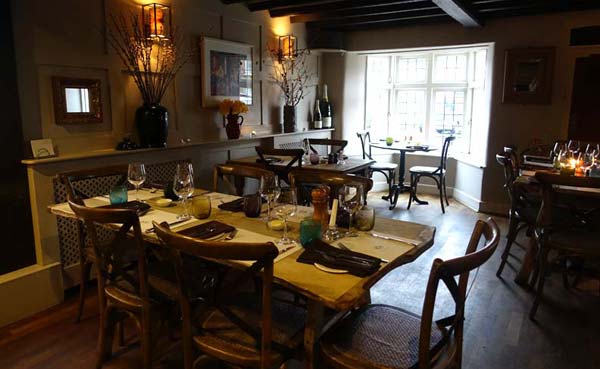 What makes this place such a great foodie destination?

The Test Valley is not only a place of outstanding natural beauty - it's also home to so many artisan producers, vineyards, butchers and vineyards there's a special Food Trail you can do.

How far from London is it?

Heading out of town on a Saturday morning, we were happily sitting down to our first lunch in the country 90 minutes later, a journey time which would be even shorter if you were already in South or West London. If you don't have access to a car, it's barely more than an hour from Waterloo to Winchester by train and there's a regular-ish bus service to Stockbridge which is where we were staying.

We were here for a night at The Greyhound in Stockbridge which last year won the accolade of Michelin Pub of the Year and is No 23 in the prestigious Budweiser Budvar Top 50 Gastropub Awards 2015. It's been here for hundreds of years, perfectly situated by the Test with its own fishing rights. We were here too early for the fishing season, but that meant there was plenty of time to eat, mooch around the pretty shops in the high street and generally loll around in comfort, which we were happy to do.

When you know about the team running The Greyhound, all those awards fit into place. Owner Lucy Townsend used to work for Marco Pierre White way back when as a pastry chef and also worked with Robin Hutson at Hotel Du Vin. She brought in genial Frenchman John Lacombe as General Manager whose work in London restaurants includes being part of the set up team at the Fifth Floor at Harvey Nichols as well as heading up the restaurant at Chewton Glen. New chef Chris Heather previously worked at local pub The King's Arms in Lockerley, The Ivy and, before that, celeb hangout Bondi Icebergs in Sydney.

The Greyhound is very much a gastropub with rooms. So there's a public bar to the left as you enter off the high street and the main restaurant. Upstairs, there are various nooks you could hole up with a drink from the honesty bar and a book but our room No 2- which can be a double or twin - was pretty spacious anyway. On a cold day in March we couldn't fully appreciate the gardens here, but in the summer they must be glorious, running alongside the river with facilities for a BBQ.

The dinner menu here slightly threw us - it's pretty massive, with everything from snacks on toast to sharing dishes and mains. As you'd imagine there's also a clear focus on seasonal and local produce. Highlights for us included:

After dinner we repaired to the bar to work our way through an extensive whisky list - the Yamaszki 12 at £4.95 proving our favourite - whilst being regaled with marvellous tunes from the local male choir which popped in here for a post performance refreshment.

Breakfast the next morning consisted of the usual full English - which was very well done - or, if you were after lighter fare, you could (unlike us) plump for the roast smoked haddock with rocket and poached egg.

All in all, the Greyhound was a lovely gastronomic place to overnight on our whistlestop tour of Hampshire. We were given the warmest of welcomes as visitors, but it was clear to see this is also a very popular place for locals - you'd certainly need to book if you were thinking of having lunch or dinner here at the weekend. 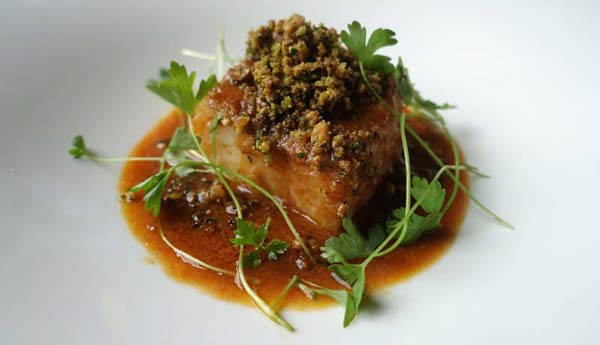 Before leaving London we'd taken to Twitter to ask for recommendation for somewhere to break our journey out of town and one particular recommendation, The Purefoy Arms stood out. We liked the obviously daily handwritten menu on their website and were intrigued by the overt Spanish dishes being served up in a pub in the middle of the Hampshire countryside.

Turns out that the husband and wife team that run it, Andres & Marie Lou Alemany, have all manner of experience working for folk like Bruno Loubet, Oliver Peyton and places like the Anglesea Arms and The House in Islington. Chef Andres hails from Spain which explained the appearance of ingredients like calcots on the lunch menu. And our lunch here was, frankly, bloody marvellous. It eclipsed much of what we've eaten in London recently and definitely deserves a wider audience. Portland crab was delicately paired with a blood orange and radish salad (£9.50) while the salt cod benefited from its delicious Catalan Picada crust. Mains were just as good - Rose veal, orzo Milanese, aged Pecorino and crispy sage being a standout daily special.

Having just bought the lease (the pair also own nearby tapas place Pulpo Negro in Alresford) there are plans for a renovation and the addition of rooms which will make this even more of an enticement to London foodie folk.

Stockbridge itself has a particularly good deli Thyme and Tides with its own cafe and fishmonger worth looking at. And the local Beccy's Greengrocer is both picturesque and useful with bunches of local watercress sitting in icy water outside its doors.

Twice a month on a Sunday you'll find the Winchester Farmer's Market taking over a car park in the centre of the city, this is one of the country's largest farmers markets (presumably that's during the summer). On a blustery spring day it was still worth a visit. We picked up fantastic bread from the Hoxton Bakehouse, which is part-owned by The Greyhound, lovely scones made with local watercress and cheese and some great crabcakes from the Isle of Wight. Everything seemed to be very local and this is a great place to finish a Hampshire weekend, stocking up on local food and wine.

On your way back to town, make a small detour to Laverstoke's Farm Shop to pick up fresh mozzarella, organic beer and buffalo burgers from this farm owned by former Formula One racing star Jody Scheckter.

Hot Dinners were invited to the Greyhound on Test. All prices correct at the time of writing.