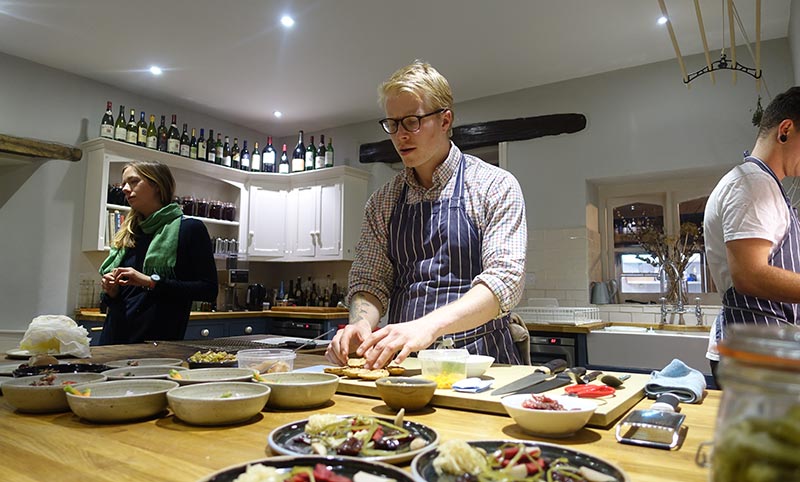 Getting things ready for dinner in the kitchen

What can you tell us about Coombeshead Farm?

It's essentially the perfect food-lover's getaway. Run by Pitt Cue's Tom Adams and his partner Lottie Mew and set up with the help of uber-successful NYC chef April Bloomfield, Coombeshead is the farm they've taken on in deepest Cornwall.

Four nights a week, Tom will be cooking dinner in the kitchen (when he's not up cooking in London), which is where you'll find him as you wander in and out in one of the most relaxed and inviting dining experiences we've ever encountered. 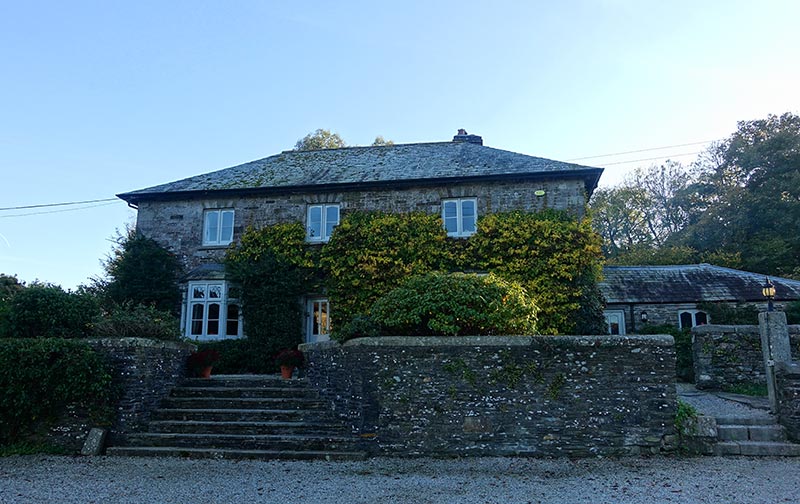 It's nearest to Launceston, about an hour's drive from Exeter. Our recommendation (assuming you're coming from London) would be to take the train to Exeter and hire a car from there as there's plenty to check out in the area - for example, Padstow's only 40 minutes away. There are very clear directions given on how to find it, but if you are driving down from town and can avoid turning up after sunset, you might find it a lot less stressful. 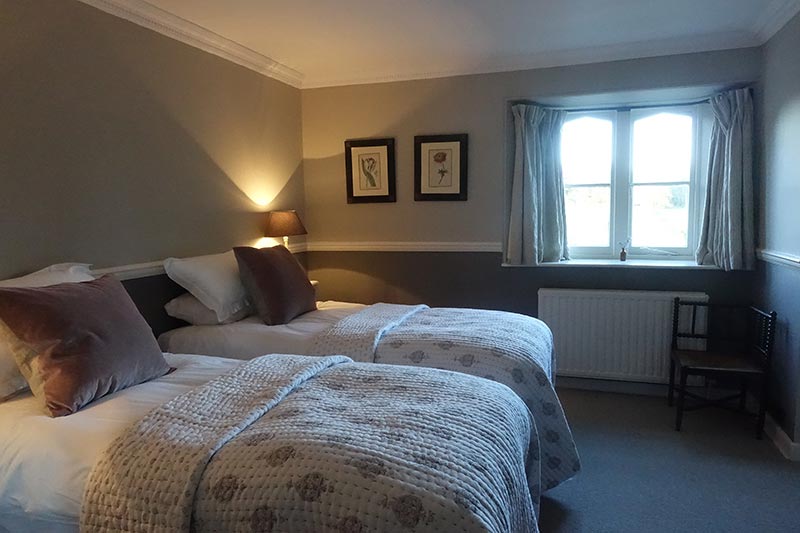 One of the bedrooms

What else is in the immediate area?

Not much without a car, apart from lots of walking opportunities (with boots available if you don't bring your own). While you're here, you'll just want to put your feet up in one of the lounges and take it easy. It's hard not to feel immediately relaxed here, a perfect getaway from the city.

And how about staying over?

There are five bedrooms, with twins and doubles available and you'll definitely want to book in unless you're living nearby.

Each has their own bathroom (with a shower) and there's clearly been a good bit of money spent on the place - with restrained, but extremely comfortable furnishings. Downstairs there are two large sitting rooms for lolling about in with a good book and the farm is surrounded by the prettiest countryside. 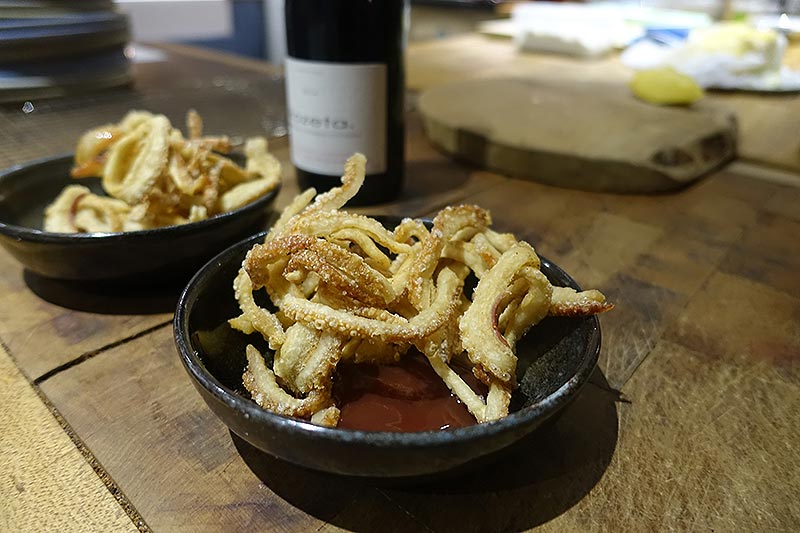 So who's in the kitchen?

If you're visiting in the next few months it's very likely that Tom himself will be cooking for you. If April Bloomfield is over there's also a possibility she'll take on cheffing duties and they'll also have some top guest chefs in from time-to-time.

But whoever's in charge it feels like a very personal experience. We visited while Tom was cooking and we don't think it could be possible to make the guests feel more welcome, in our opinion. He's very open about talking through the food or just having a chat in general. Pop into the kitchen from late afternoon onwards and you'll almost certainly find him there. 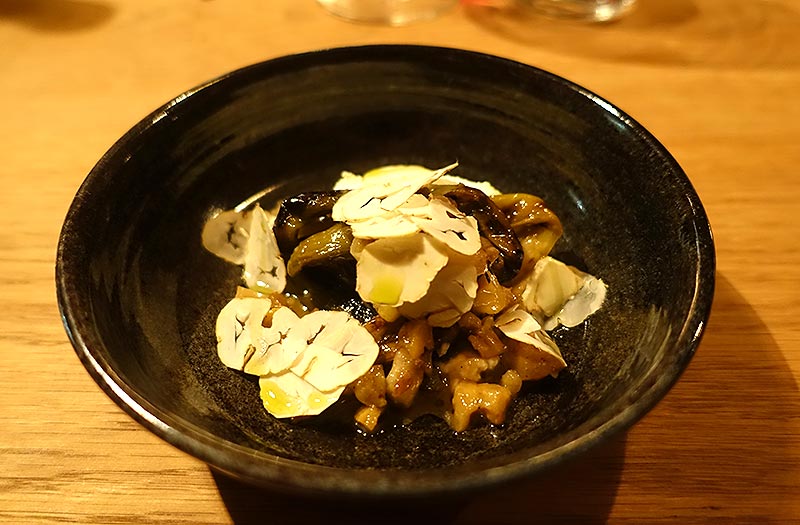 And how about the food itself?

Expect a menu that is ever changing, even if you're staying on subsequent nights. It's a single menu - but they will make adjustments for certain preferences (we know of a recent vegetarian version of the menu put together for Instagrammer Felicity Spector). You'll be eating communally in the dining room (there's also an additional table in the kitchen) and we found our fellow guests to be a mixture of Londoners, staying over, and locals dining there that night who were thrilled to have such a great new addition to the area.

First up are the little snacks you'll get while hanging around the kitchen or lounging about before dinner. On our stay, these included "pig skin and plum", "potato skin and cep", "pickled prunes and speck" and more. Perfect for pre-dinner snackage. 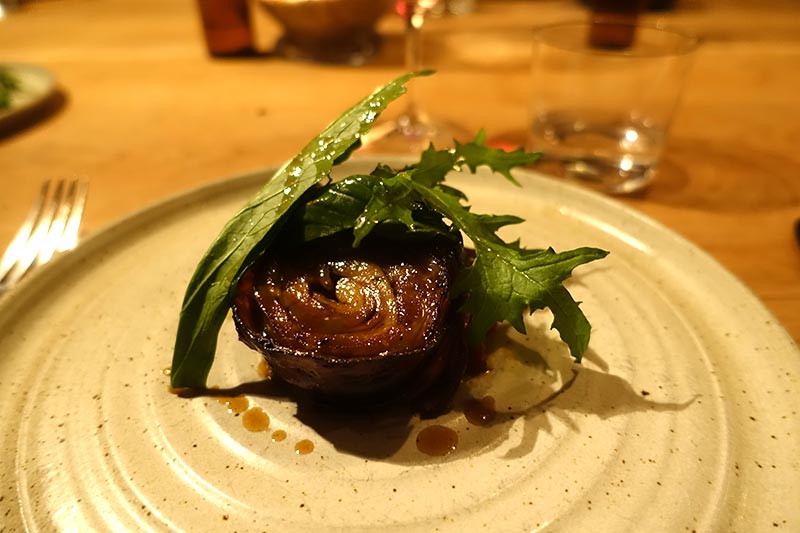 Then there's the first course, which is comprised of several dishes that match up very well with the bread on offer - so rillette, chicken liver, (very, very good) smoked roe and pickles. We marvelled at the bread at Pitt Cue earlier this year, and the bread at Coombeshead is just as moreish. Just try to restrain yourselves from having too much of it.

In all, a top dinner and worth the trip alone. 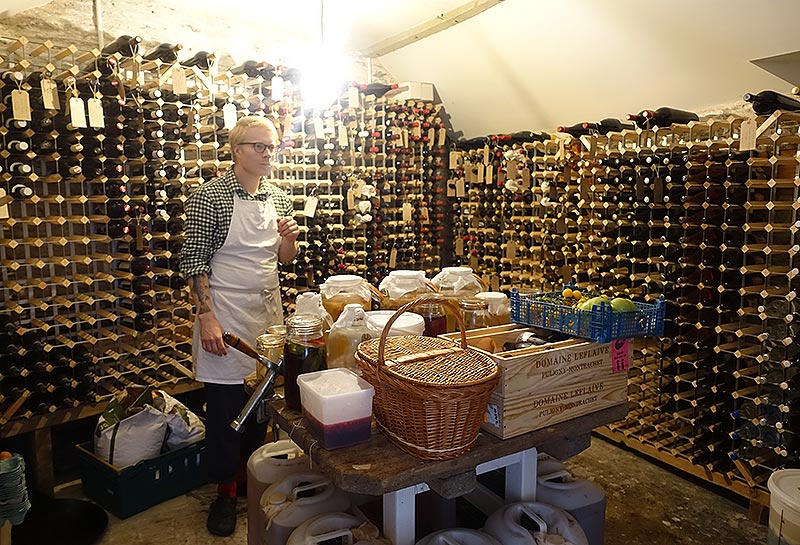 Tom in the well-stocked cellar

And how about the wine?

There's a wonderful wine cellar which has a combination of wines chosen by Tom and also by Zeren Wilson (aka Bitten & Written) who's popping up as the creator of many good wine lists at the moment. Of the list at Coombeshead Zeren told us; "I helped Tom select the suppliers and also with a selection of three sparkling (Champagne Agrapart ‘Les 7 Crus’, Prosecco ‘Col Fondo’ Zanotto, Bugey Montagnieu (from Savoie). There's also a "core" selection of five red and five white under £50, and wine by the glass.

"The rest of the list is built largely from the Adams’ own cellar. So there are lots of magnums from top domaines like Flaccianello and Fontodi in Tuscany, Morgon from Jean Foillard in Beaujolais, ‘Clos des Papes’ in Châteauneuf-du-Pape, Faugères from cult winemaker Leon Barral. On top of that, there are plenty of Austrian listings including Werlitsch, Bründlemayer and Groszer Wein (a litre bottle of Blaufränkisch). And finally, there's some of Tom’s brother Ben’s wine, made at Les Clos Perdus in Corbière." 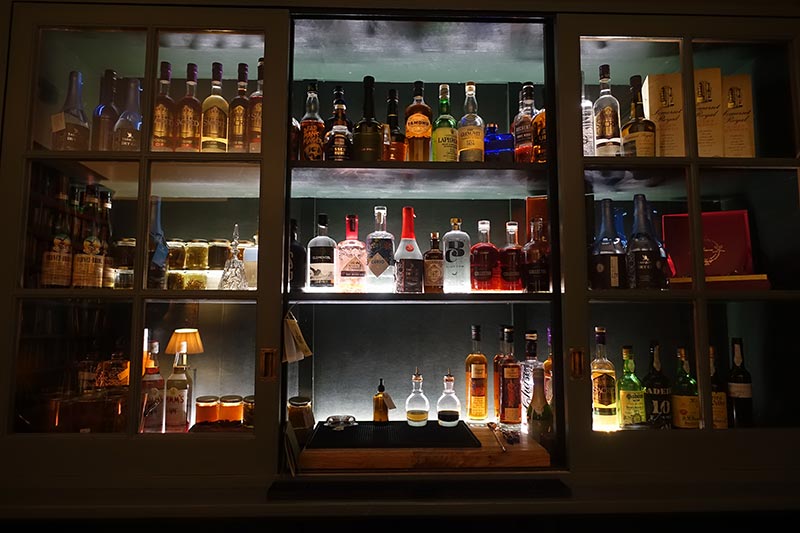 The honesty bar in all its glory

And what about something stronger than wine?

There are beers and cocktails on the list too - as well as an amazing honesty bar with pretty much everything you could want in it along with cordials for cocktail-making. That could get messy.

And finally, what about the morning after?

Breakfast is almost as big a deal as the dinner the evening before. The bread makes another welcome appearance along with granola, muesli (made with oats they've rolled in the kitchen beforehand). But it's the main cooked event that will lure you out of bed in the morning. We had hogs pudding, a great slab of their own belly bacon and wonderful scrambled eggs. 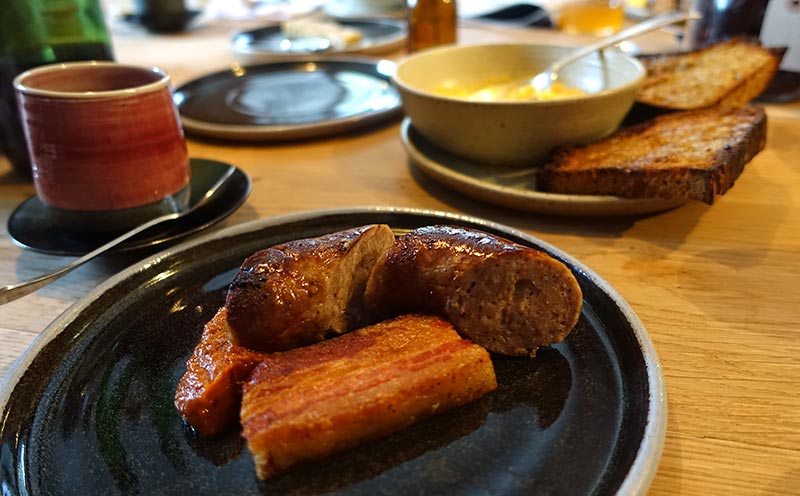 Coombeshead Farm is deservedly destined to be one of the top foodie destinations in the country. With one of the UK's top chefs paired with one of New York's finest, it was always going to be high on anyone's list of places outside of town to visit. We had been eagerly anticipating our visit there but it completely exceeded our expectations. The farm is a great place to take it easy for a couple of days, but it's also well placed for you to base yourself and see more (and eat more) of Cornwall.

Given that it's only going to get better, with more masterclasses coming and plans afoot for the farm's many outbuildings, what are you waiting for? Book your night there right now.

Want to see more? Check out our full Coombeshead Farm gallery on Facebook.