[SIGPLUS_EXCEPTION_SOURCE] Image source is expected to be a full URL or a path relative to the image base folder specified in the back-end but /blog/2016/lainston/gallery is neither a URL nor a relative path to an existing file or folder.
0
Shares 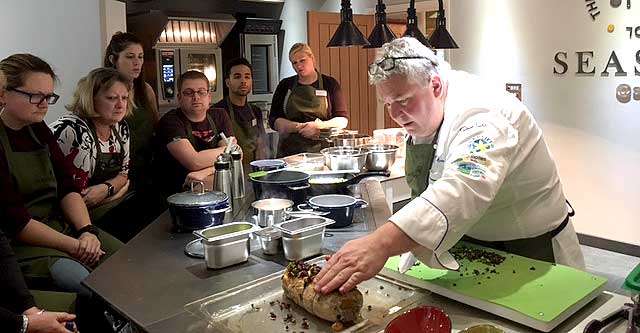 It's not often we get out of London - so we jumped at the opportunity to learn how to make the ultimate roast dinner with all the trimmings at the 5-star Lainston House hotel just outside Winchester. A one hour train ride from London and a short cab ride later, we drove through the vast estate to the impressive looking 17th century country house with a massive log fire blazing in the hall. Things got even better when we saw the suite we were booked into (thanks to an upgrade) - it was bigger than most London apartments, and even boasted a four poster bath. Even the shower had something called a rain bar.

We'd been invited down to Lainston House to try out its relatively new cookery school, Season - nestled inside a renovated well house next to a kitchen garden which supplies the hotel restaurant with all sorts of fresh ingredients. Classes are run by a range of chefs from across the Exclusive Hotels group, many of them with Michelin stars, offering the chance to learn recipes and techniques from the likes of Matt Gillan, Michael Wignall and Olly Rouse.

Our 'ultimate roast' class was led by Andy Mackenzie, executive chef of the hotel group's Chefs' Academy - who managed to strike the perfect balance of humour, patience and expertise. Armed with a sheaf of recipes, he demonstrated each dish before sending us off in pairs to make our own versions.

Without getting at all stressed and exhausted, we managed to prepare an entire three course meal, curing sea trout, making stuffing, even whipping up a brandy custard to go with the pudding. All the recipes were straightforward and easy to follow, from butterflying and stuffing a joint to some handy short-cuts for getting all the side dishes ready in advance. By 4pm, we all sat down togther around a big table to eat the lunch we'd made, including the chefs who had helped to get everything ready. We had to admit that if only there were teams of prep chefs weighing out and chopping all the ingredients back at home, dinner parties would become a whole lot easier.

Breakfast the next day included a generous buffet of fruit, buffalo milk yoghurts, pastries and cereals, as well as various hot dishes: we tried some pikelets with maple syrup and a vegetarian full English. If you're staying a while, there are a whole range of activities on offer, including walks through the 63 acres of parkland, fishing, and a special falconry experience, with, naturally enough, the hotel's resident falconer.

The all-day classes cost around £185 - but for that you get a full day of tuition and guidance, plus lunch - and enough leftovers to take home to keep you in dinners for the rest of the weekend. Rooms start at £195 per night. Andy, and the cookery school manager Sylvain Gachot, did everything they could to accommodate special requests - cheerfully adapting some of the recipes for a pregnant guest, and another who was vegetarian. We're really tempted to go back for some of the other classes on offer, including a range of baking courses, pasta making, and a special session with Matt Gillan, recreating his famous Great British Menu goat dish. Now that really would be a challenge.