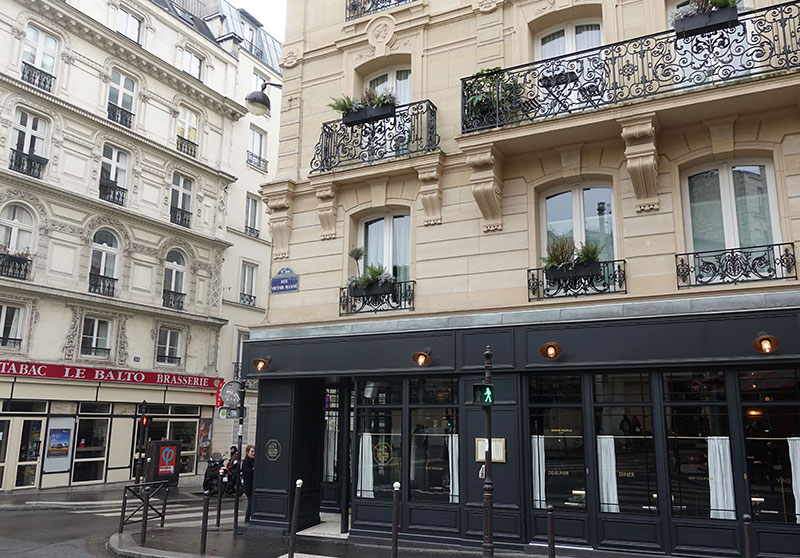 Right in the heart of things - Le Grand Pigalle

They opened Le Grand Pigalle, their first hotel, in 2015 and are on the verge of opening two more hotels this year - the Grand Boulevard in Paris and the Henrietta Hotel in Covent Garden where the restaurant will be run by Ollie Dabbous. On that basis, we thought it was a good idea to try out their Paris hotel to see what might be coming our way.

Our room with balcony overlooking the Rue Henry Monnier

Le Grand Pigalle is situated in the so-hip-it-hurts area of SoPi or South Pigalle. The 9th arrondissement is tucked under Montmartre, where the edges are still pretty sleazy with lapdancing bars. Le Grand Pigalle is right in the centre of it, just beside the best street for bar-hopping and a step away from Rue des Martyrs with all its beautiful food shops and boutiques.

There are 37 rooms ranging in size from 15m Sopi rooms to the 25m suites under the eaves. All, crucially, have minibars featuring all manner of lovely French produce. Dangerously, that includes pre-mixed cocktails from the bar downstairs. Ours had a sweet little balcony overlooking the street, which was useful for putting the cheese and charcuterie we'd picked up from the local delis in our coolbag on a wintry day. In summer it would be a smashing place to have a glass of wine and enjoy the views over Paris. 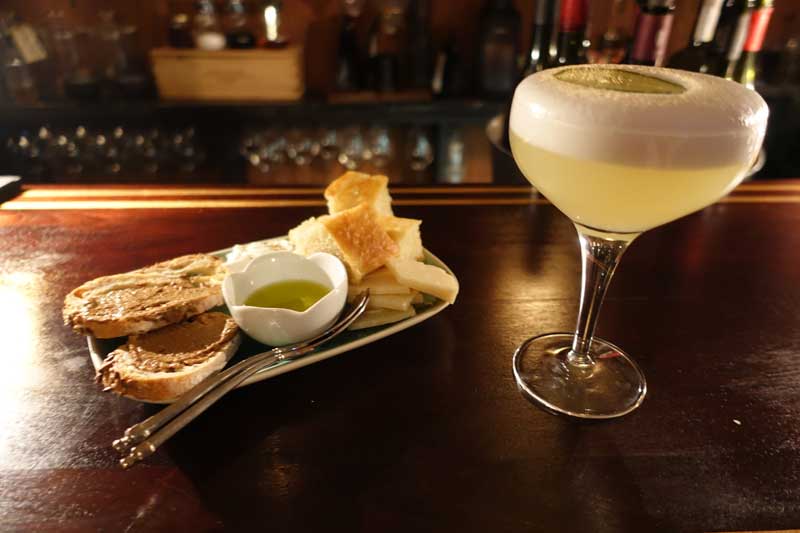 Cocktails with a top snacks platter of bread, pate, burrata and cheese

You'd be mad not to make a detour for the bar here at your earliest convenience. We loved the cocktail list, but in the end were persuaded to go off-menu, giving the bartender details of our favourite drinks so he could whip up something with elderflower liqueur and gin for me and a sour for Gavin.

For their restaurant here, the group have brought in super hot chef Giovanni Passerini - Le Fooding's Paris chef of the year for 2016. He has one other Paris restaurant, the eponymous Restaurant Passerini and a newish pasta shop Pastificio Passerini. Here at Le Grand Pigalle the menu has a Mediterranean influence with dishes inspired by the hotel's extensive Italian wine cellar. 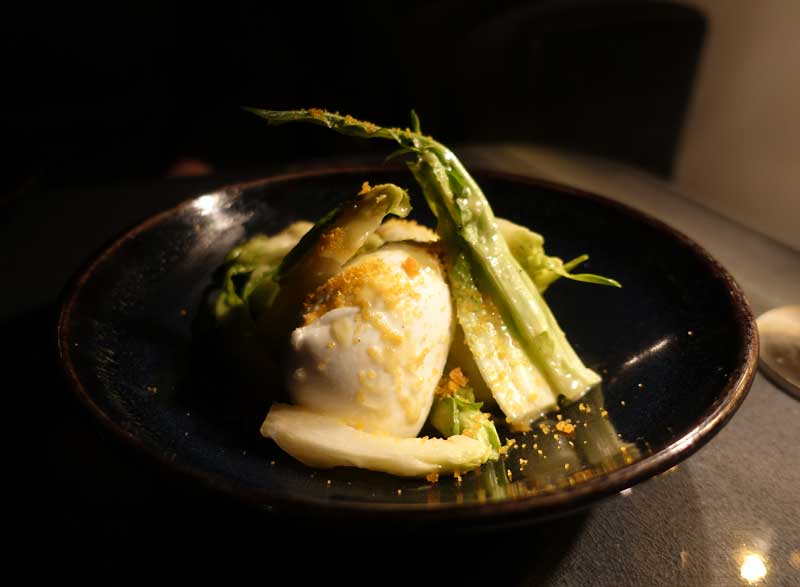 Mozzarella with punterelle and bottarga

Our best starter was a mozzarella served up with puntarelle and shaved bottarga - the bottarga an odd, but really brilliant pairing with the creamy cheese and bitter leaves. As you'd expect, the pasta was on point - beautiful ravioli with sage and parmesan and it was hard to decide which was better, that or our other main of lamb breast served up with chevre cheese, curried carrot puree and dandelion leaves.

Our dinner finished with a flourish with a shared dessert of beignet stuffed with crème pâtissière ice-cream (7 euros). Their patisserie chef is turning out wonders from such a tiny kitchen. 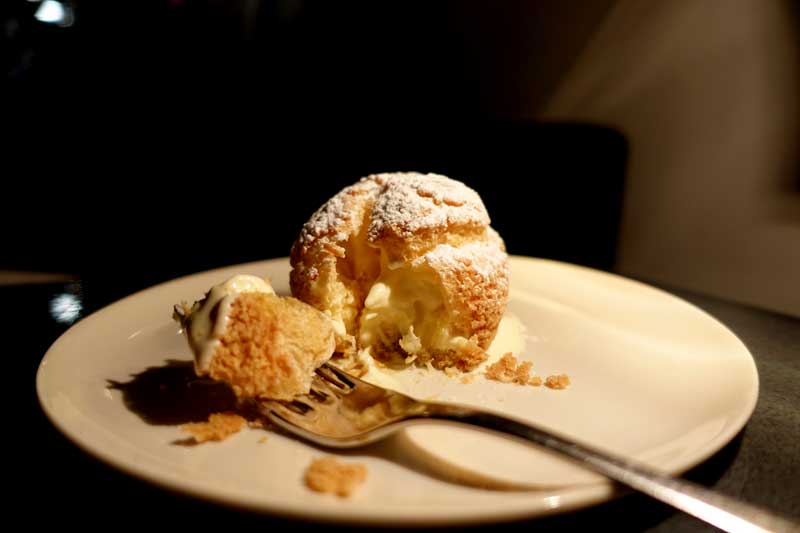 As for the wine, the sommelier picked out an organic red from the south of Italian made with grapes grown on the slopes of an extinct volcano which went wonderfully with our meal.

There are so many great bars in this part of Paris and we did our best in a mini-crawl to cover a lot of them. Our first visit was to Dirty Dicks, a tiki bar set in an old strip club, just seconds from the hotel. Here drinks are served by a largely British bar team to an enthusiastic Parisian crowd. Expect to be sipping your cocktail from a coconut shell.

From here we made a quick pitstop at Monkey Bar - a buzzing new-style cave a vin - then we popped into La Baze a proper Parisian wine bar where we soaked up some of the booze with a decently priced cheese and bread platter. Finally, we ended up back in our room, where we were ALWAYS going to end the night raiding the mini bar and drinking one of the pre-mixed cocktails. 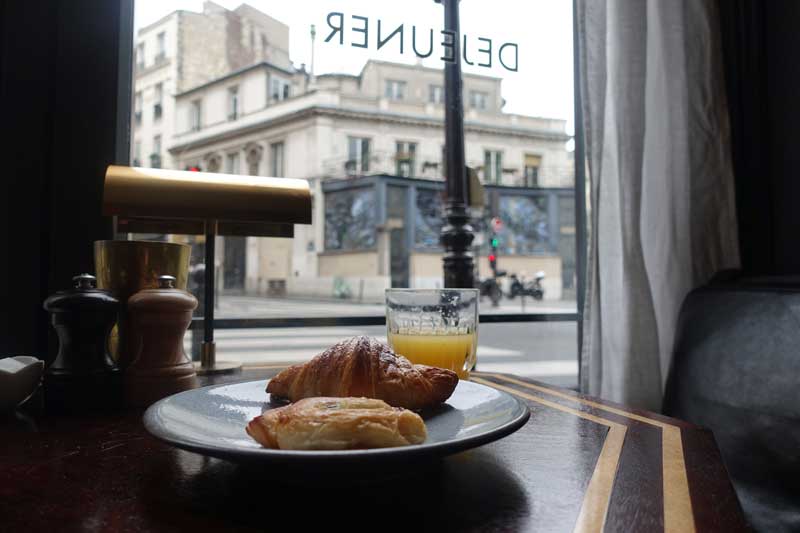 Le petit-dejeuner the following morning was a little subdued but there was plenty to choose from up at the hotel bar - with all manner of charcuterie, patisseries, juices and good strong coffee to mitigate our excesses of the previous evening. Plenty of locals popped in for coffee and a read of the paper too - this is a popular neighbourhood spot.

Much of Paris is shut on a Sunday, but the good news is the food shops of Pigalle are largely open. From the hotel it's a five minute walk to the foodie central of Rue des Martyrs where you can stock up on loads of great produce to take home with you (don't forget to bring a cool bag). There's a shop devoted to madeleines - Mesdemoiselles Madeleines, a great Corsican deli and wine store, Terra Corsa and the quite beautiful patisserie of Sébastien Gaudard - pick up some of his amazing chocolate and soft caramels and see if they last beyond the trip back, plus other delis, wine stores and boulangeries too numerous to mention.

There's a shop devoted to madeleines - Mesdemoiselles Madeleines, a great Corsican deli and wine store, Terra Corsa and the quite beautiful patisserie of Sébastien Gaudard - pick up some of his amazing chocolate and soft caramels and see if they last beyond the trip back, plus other delis, wine stores and boulangeries too numerous to mention. 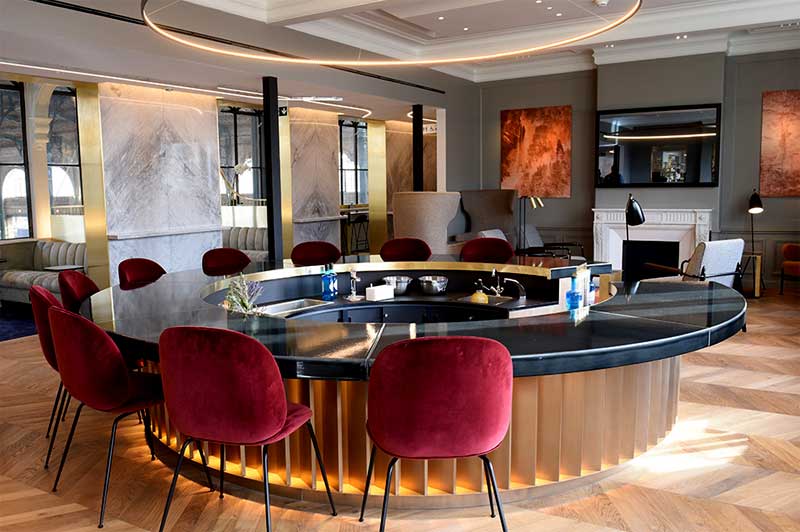 There was just enough time to head back to the Gare du Nord to check out the new Eurostar business lounge which had just opened a week previously. Fortunately for us the sunken cocktail bar was closed (it's open only on weekdays) but we were able to revive ourselves with a glass of Provencal rose from the enomatic machines you can help yourselves too. A pretty good end to a cracking overnight stay.

Le Grand Pigalle is at 29 Rue Victor Massé, 75009 Paris, France. An overnight stay on a Saturday this spring starts at 127 euros for a double room. We stayed as guests of the hotel. Gavin works for Eurostar, but we did not travel as their guests.