Cheeky overnight: we check into The Berkeley in Knightsbridge 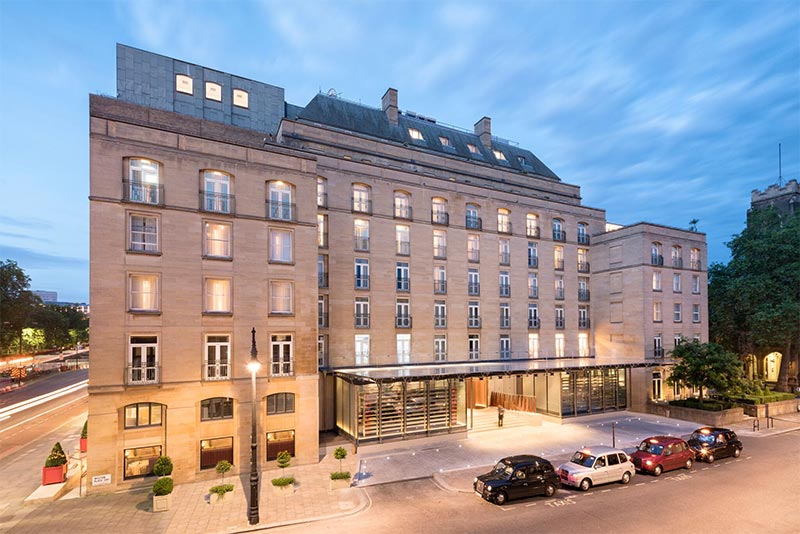 The newly revealed and completely updated entrance to The Berkeley

Maybourne Hotels own three of London's most glamorous hotels - Claridges, The Connaught and The Berkeley. The Berkeley actually has a history dating back to the 18th century having begun life as a Piccadilly coffee shop turned hotel. But it's only been on its current site since the 1970s.

And while that means there's perhaps not so much architectural history as its fellow hotels, it has one major upside in that they were able to bring modern innovations to the hotel scene, not least their amazing rooftop pool and spa. More recently the hotel's focused on its food and drink offering - the Blue Bar has been a hot place to meet since the 90s

We timed our stay well, arriving the day after the hotel had unveiled its new entrance after extensive renovation work. Essentially the whole front of the hotel has been remodelled by Richard Rogers, adding two glass pavilions either side of the front door. One of these is an extension to the Blue Bar which, in turn, has had a redesign by Robert Angell.

The other houses the Collins Room (named after the late designer David Collins whose design first catapulted the Blue Bar to fame) where you can have breakfast and try the famous Pret a Portea afternoon tea which is refreshed every fashion season. 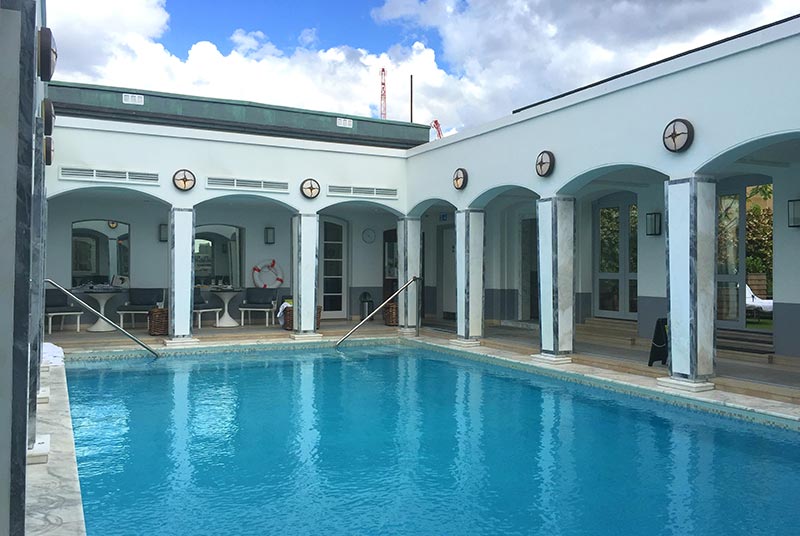 The absolutely not-to-be-missed pool on the rooftop

Having expected to stay in a normal room we had a lovely treat awaiting us - an upgrade to one of the hotel's new Chelsea suites, also redesigned by Robert Angell. These rooms all have four poster beds and ours had a separate lounge area with various goodies awaiting us - a plate of cookies, fresh strawberries and a mini plate of Pret a Portea biscuits.

But, the sun was shining (for once) which meant one thing - dashing upstairs as soon as we could to swim in the hotel's rooftop pool. There aren't many places in London you can swim outdoors whilst waiters pad quietly round asking if you'd like another glass of rose or something from their poolside menu. It was going to be pretty hard to leave here. 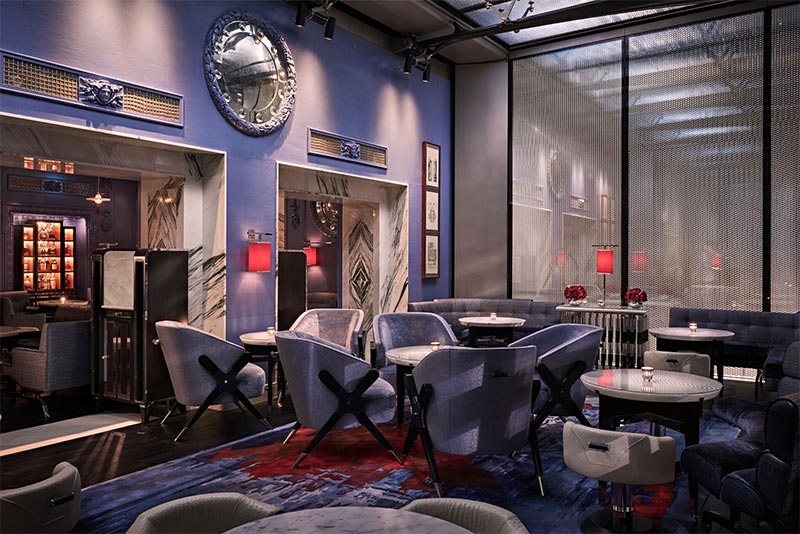 The newly revealed and completely updated entrance to The Berkeley

With the new-look Blue Bar only having taken off its dust sheets the day before, there wasn't any real doubt as to where we were going to kick off the evening. Along with the new design, there's also a new cocktail book - with drinks categorised by colours – green, yellow, red and blue – each one denoting a different potency of mix. We also liked that anyone swearing off the hard stuff was included in this - every section featured a non-alcoholic drink to tie in with its more boozy brethren. 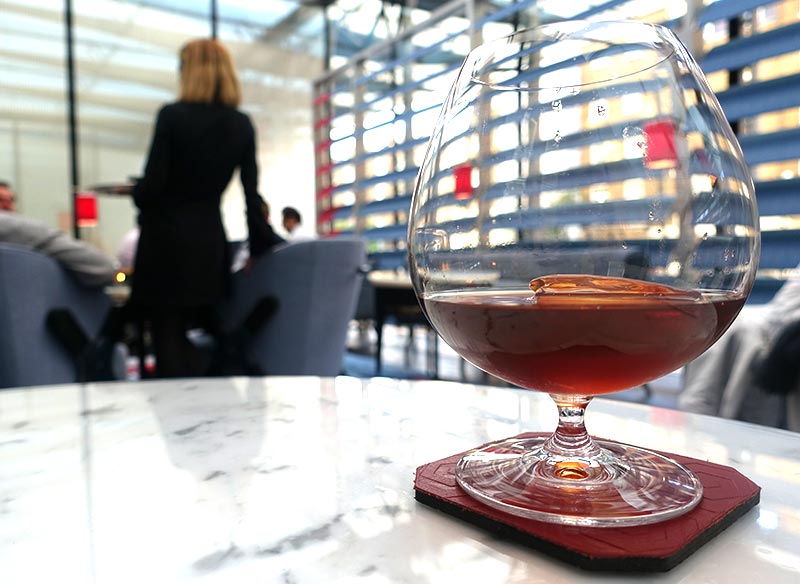 Smoke and Mirrors in the Blue Bar

Our Smoke and Mirrors (£21) may have been a little bit too bonfire for our tastes but the Frozen in Time (£17) - Grey Goose vodka with Martini ambrato and coral bitters went down very well. And the truffley cashew nuts as a snack were a welcome bonus. 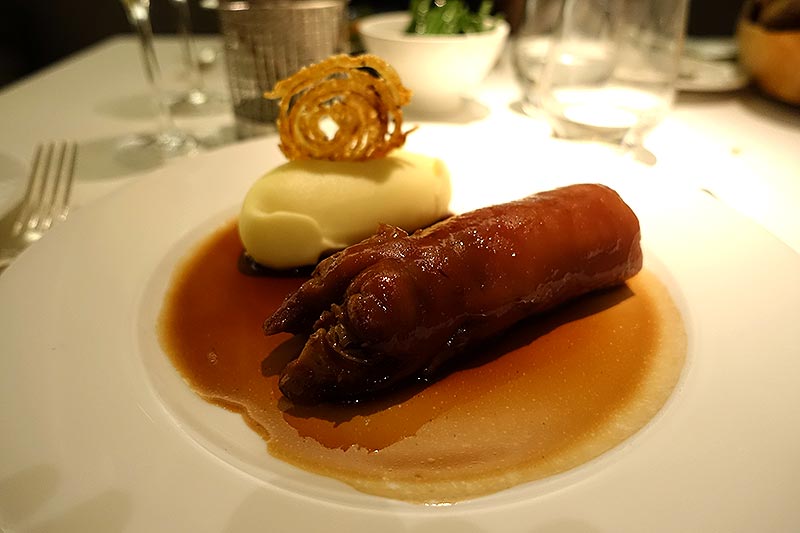 We're not sure why it had taken us so long to get around to trying Koffmann's - after all Pierre Koffmann has been here since 2010. But it was a good job we did because, days after we had dinner here, there came the news that Koffmann's was to close at the end of the year. Judging by what we had, you'd better get down quick. 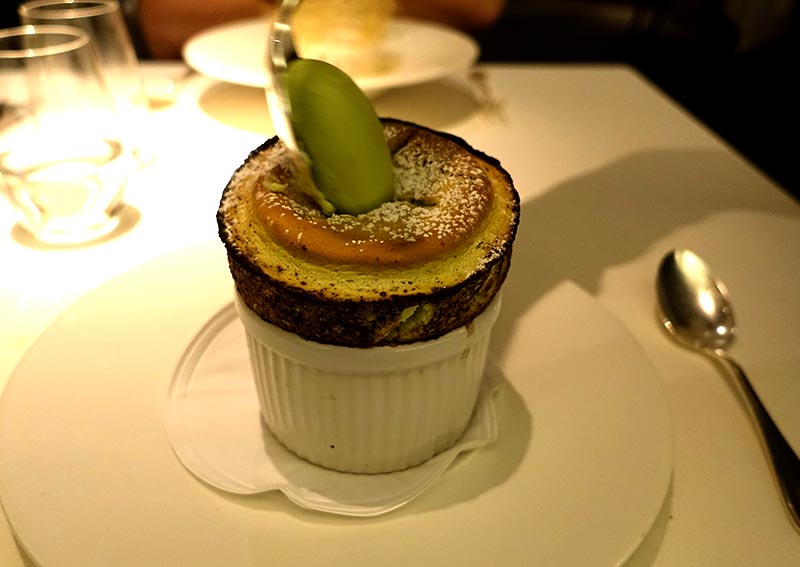 We felt we had to try his famous signature dishes - the pigs trotters and the pistachio souffle. Those were great - that souffle being particularly memorable - and we enjoyed all the other elements of dinner here including a particularly good starter of hot foie gras with chicory and Sauternes sauce. The separate entrance on Knightsbridge makes this feel less of a hotel dining room and many of the clientele were clearly regulars.

You can, of course, choose to eat at Marcus Wareing's restaurant - and you can check out our Test Drive of Marcus here.

The morning after the night before 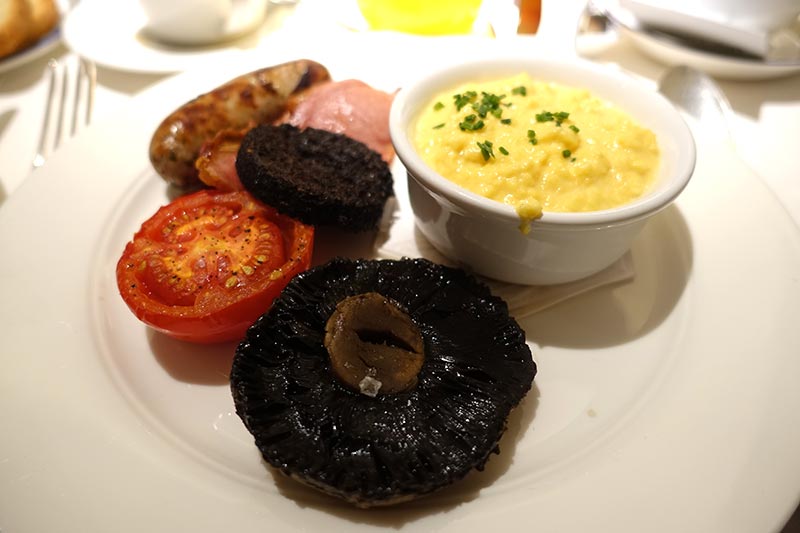 Our decision to repair to the Blue Bar once more post dinner meant that the next day, more than usual, we were in need of a restorative breakfast. Alas, we didn't realise you could have a light breakfast of pastries and eggs in the Collins room so it was back to Koffmann's for a particularly good cooked breakfast.

We weren't quite up to giving the Gascon breakfast of scrambled duck eggs with truffle shavings and pan fried foie gras a go, but the Berkeley full English did the job.

What's in the area? 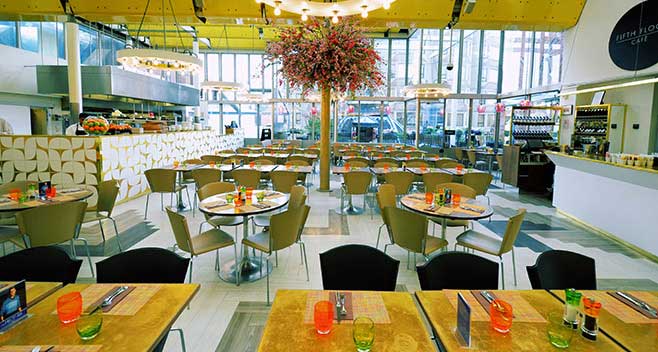 The Fifth Floor at Harvey Nichols

If you're staying for longer than a cheeky overnight, The Berkeley has heaps of potential places to eat and drink on its doorstep. Just along the road is one of London's great seafood restaurants One-O-One, there's plenty to try up on the Fifth Floor at nearby Harvey Nichols (which from next month will have its own branch of Zelman Meats) and if you're after a proper pub the Grenadier on nearby Wilton Walk is the place to go.

The combination of Richard Rogers' architectural vision and Robert Angell's design has given the Berkeley a wonderful facelift. Marcus Wareing has already brought his restaurant at the hotel bang up to date too and the future for the space currently occupied by Koffmann's looks promising. But, if you can, we'd suggest a cheeky overnight or two to enjoy both of the restaurants.

Prices for rooms start at £600 and if you look out you'll find deals such as the current Timeless Weekend offer which includes welcome champagne, traditional English breakfast, selection of films and late check-out.

Find out how to book your own cheeky overnight at The Berkeley.