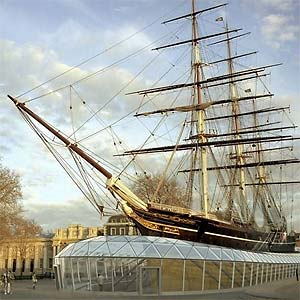 Heading to Greenwich to see the Cutty Sark in its glorious new setting? Here's our pick of good spots to eat near Greenwich.

The Rivington have put together a special 3-course meal to celebrate the reopening of the Cutty Sark. For £26 you can enjoy dishes such as water souchet – a soup traditionally enjoyed as part of the 18th century whitebait feasts in Greenwich and a gala pie, traditionally a symbol of celebration (until 26 May 2012).
Rivington, 178 Greenwich High Road, SE10 8NN

Slap bang in the grounds of the Old Royal Naval College, the Old Brewery is still very much in the business of serving beer - they're owned by Meantime. If you're here for lunch, try the Grilled Galloway beef burger (£9.75) and make sure you order the extra of Meantime Pale Ale slow braised pulled pork on top for a quid.
The Old Brewery, The Old Royal Naval College, London SE10 9LW

A modern European bistro in the heart of Greenwich, you can expect dishes like Wild garlic leaf & chive risotto or Roasted butternut squash strudel. The Sunday lunch menu looks good and comes in at £18.95 for two courses (although there's an irritating additional charge for the beef).
Inside, 19 Greenwich South Street, London SE10 8NW

The market is just around the corner from the Cutty Sark and the food stalls are usually here from Wednesday to Sunday. Look out for La-Mian & Dim Sum serving up handmade noodles and dim sum (Tues-Fri) and Son of Pampa (Fri-Sun) with their steak sandwiches served up with Chimichurri and freshly-made churros.

If you're looking for good food on the hoof, head for Nevada Street where local sausage maker Heaps serve up hot sausage baps which they make freshly on the premises.
Heaps Sausages, 8 Nevada Street, London SE10 9JL

Byron opened in Greenwich this Spring, on a spot perfectly situated between the Cutty Sark and the river. There are three choices of hamburger  – classic, with cheese, and the signature Byron (with cheese, bacon and Byron sauce) - on offer together with a good list of craft beers and bourbon.
Byron Greenwich, East Pavilion, Greenwich Promenade, SE10 9HT