Veganuary specials for collection or delivery

It's January - and that means it's also Veganuary, which has people shunning meat for a month. This year is slightly different, of course, with a stay-at-home version of a plant-based menu the order of the day. So if you're taking the vegan plunge for the month (and maybe longer) - here's our roundup of the latest vegan specials... 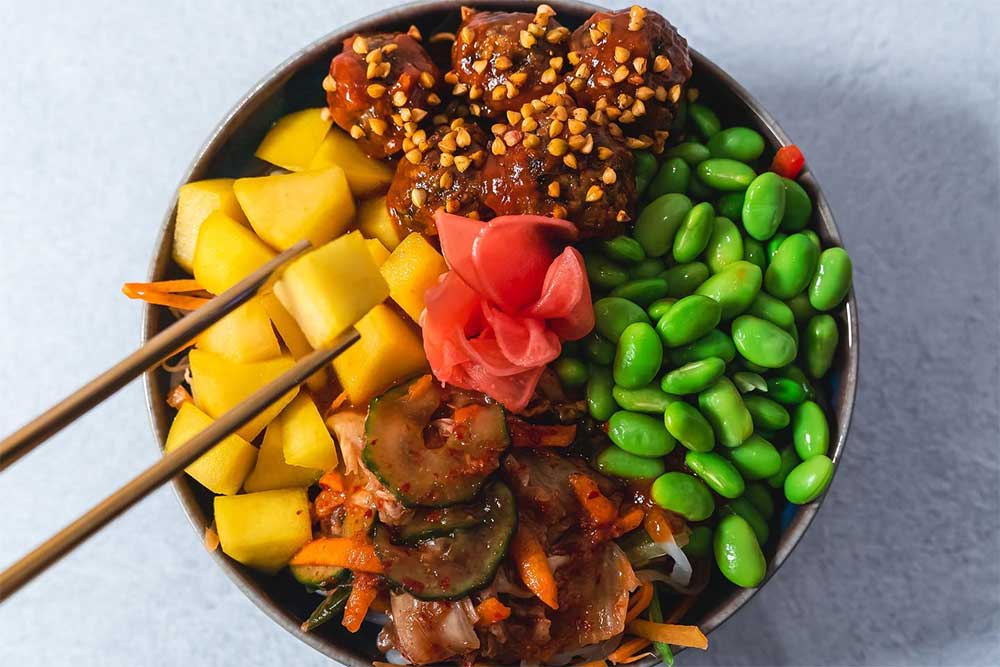 Island Poke (Takeaway or local delivery) have joined up with MasterChef: The Professionals finalist chef Philli Armitage-Mattin for their Veganuary bowl. It features zero-calorie noodle slaw as the base, with rolled mushroom and oat balls, and is topped with a Korean BBQ sauce, turmeric pickled pear, edamame, kimchi, pickled radish and a dusting of toasted buckwheat for added crunch.

Tonkotsu have launched a new vegan dish. Their 'eat-the-bits' cauliflower wings are new on the menu for Veganuary but will be a permanent addition.

Atis in Shoreditch (collection and delivery) have teamed up with London's first tempeh factory Club Cultured for a Veganuary bowl which includes gochujang tempeh dressed in a roasted cashew dressing.

Patty & Bun (London delivery) - The burger slingers have just launched their January vegan special. It's The "Plant and Dec" (we see what they did there) and includes vegan fried chicken, ranch mayo, buffalo sauce and pickled red onions. It'll be available for January only, delivering via Deliveroo or Slerp.

Crosstown (Local collection and delivery) - There's two new vegan cookies on the menu at Crosstown - a Peanut Butter & Chocolate Chip and an Apricot & Chocolate cookie made with oats. In addition to this, there's a new vegan doughnut - the Chai Custard made with vegan sourdough in Chai tea spices and with an oat milk custard filling, and roasted pecan cinnamon crumble on top. They also have a new Prana Chai vegan ice cream on offer.

Leon (Nationwide delivery) is launching the LOVe Burger At-Home Kit, in partnership with Meatless Farm, which will let you recreate their vegan burger at home. They're also launching a new subcription service that will give you 30% off food at Leon nationwide.

Honest Burgers (Local delivery from your nearest Honest) - they have the Tribute to Jamaica on offer for January which combines a plant-based patty with Dee's Table's apricot and scotch bonnet ketchup, THIS Isn’t bacon, vegan smoked gouda, plantain fritters, Jamaican curry ‘mayo’ and lettuce.

Bone Daddies (Local delivery from your nearest branch) have the 'Notkotsu' on for January which they say is London's first plant-based tonkotsu. It's created with Bone Daddies homemade plant-based tonkotsu broth, mushrooms, THIS Isn’t pork belly rashers, beansprouts, spring onion, pickled ginger and burnt garlic mayu oil and is available all January.

Oowee Vegan (Local delivery from Dalston and Brixton) have a new burger for January - the 'It's All Gravy!’ burger. It features their own plant based chick’n, house made gravy-aise, smoked gouda, hash brown and onion ring gravy barrier, served with a pot of thick, American-style pouring gravy.