The best tapas restaurants in London

Hankering after a taste of your hols or simply fancy hoovering up some jamon with a lovely glass of Albarino? We pick out London's best tapas restaurants for you to try. 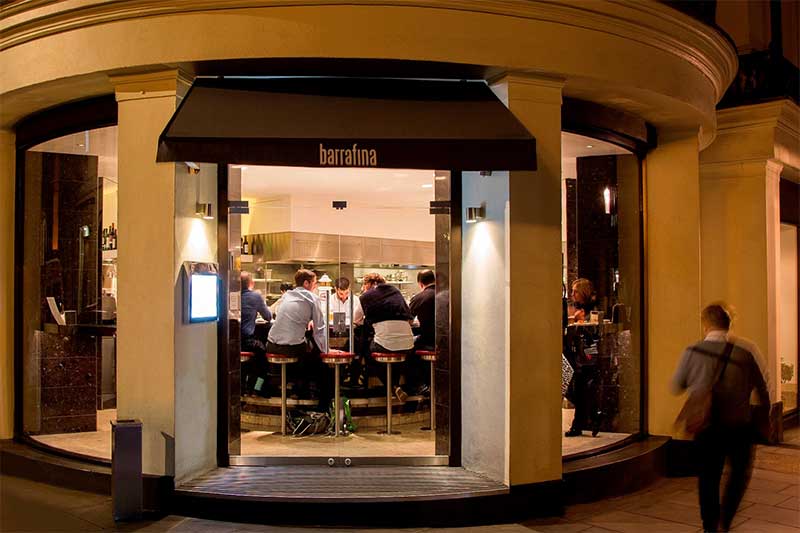 Can it only be just over 10 years since the Hart Bros changed the landscape of the Spanish food scene in London? When Sam and Eddie opened the first Barrafina on Frith Street in 2007 it was to evoke their best times sitting up at the counter at Barcelona's Cal Pep. And they succeeded in introducing Londoners to a new level of tapas by cunningly procuring the talented Nieves Barragán (now at Sabor) to run the show.

Dish to order: The runny tortilla was always the defining dish here, but the Milk Fed Lamb’s Kidneys on their own mini grill comes a close second. 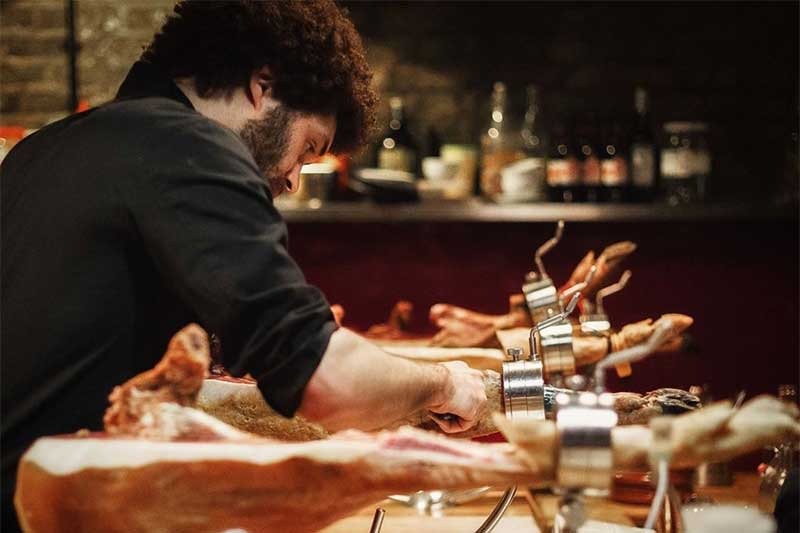 Step in out of the chaos outside on market day and, if you manage to secure a seat at this wonderful little jamon bar, be very thankful. Owner Chuse Valero was working as a carver in Barcelona when Monika Linton from Brindisa enticed him over to London. Now, together with friend Zac Fingal-Rock Innes (whose family are the Fingal-Rock wine merchants), he runs this tight ship of excellent jamon and very good wines. 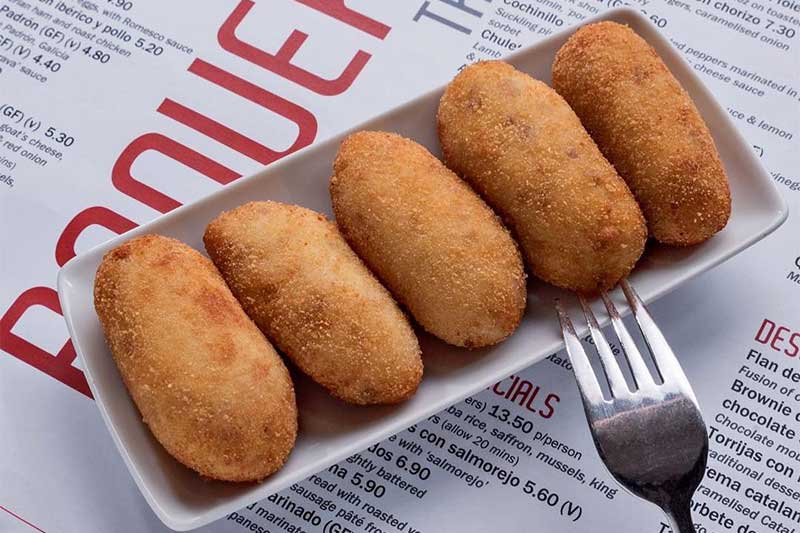 When you name your tapas bar after the biggest and best food market in Spain (maybe Europe), then you’d better have the goods to go with that. Happily, Boqueria does. Barcelona-born co-owner Jaime Armenter serves up a menu that covers all the classics but also showcases modern dishes like Beef Tenderloin, Foie & Pedro Ximénez on toasted bread.

Dish to order: Octopus with paprika on a bed of potatoes - looks and tastes amazing. 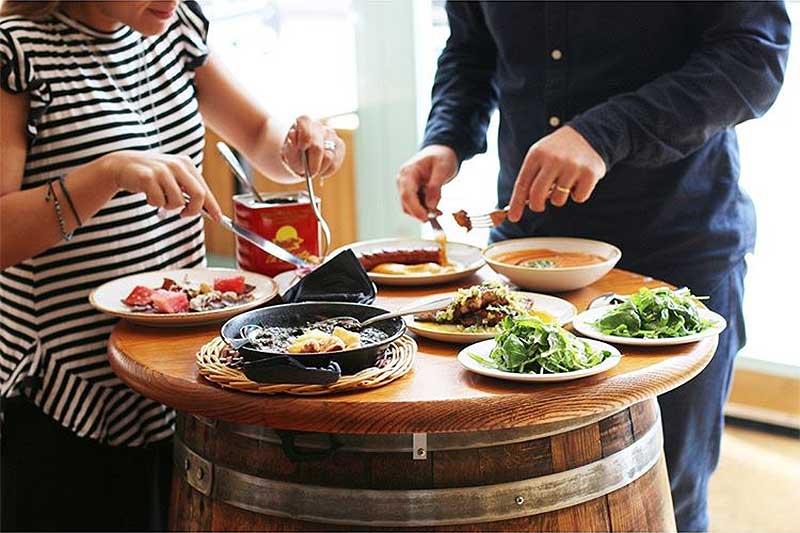 Brindisa founder Monika Linton's contribution to the London tapas scene can't be underestimated. Way back in 1988 she began importing top quality Spanish produce to London. Restaurants inevitably followed and the group now have five dotted around London. Our favourite is still the Borough Market one, even though it's probably the hardest to get into. 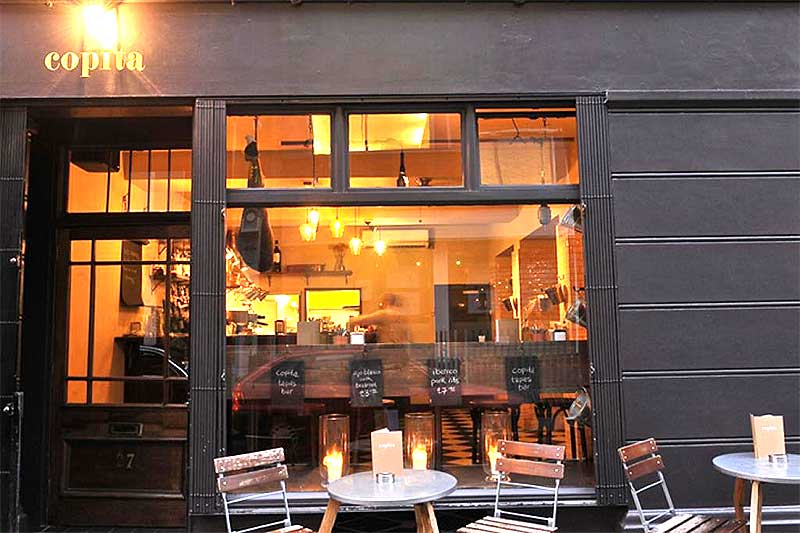 Noisy and vibrant, this Soho spot from the chap behind Barrica packs them in year round and its mixture of standing space and stools gives it an authentic tapas bar vibe. Don’t forget to peruse their excellent sherry list.

Dish to order: Chargrilled octopus curled around a bed of crushed potato and sprinkled with smoked paprika. 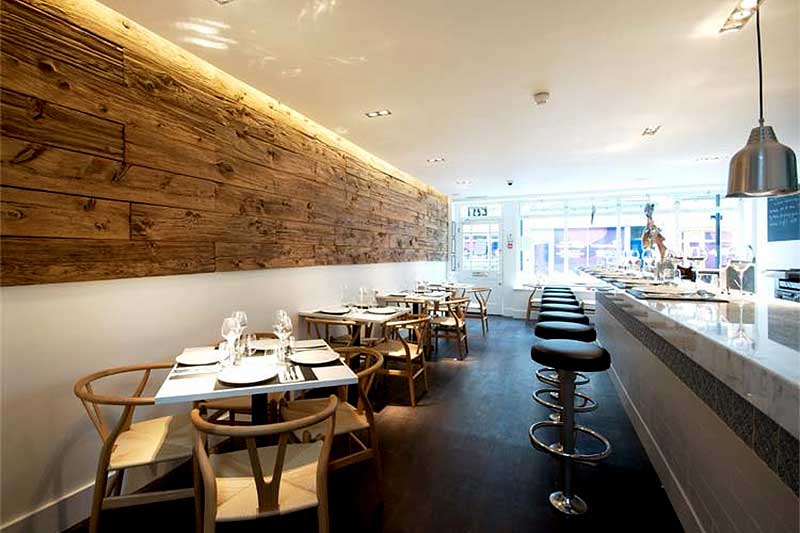 Taking its name from San Sebastian, this Marylebone spot serves up Basque-inspired tapas and pintxos. They also have a background in wine importing so there's no better place in town to try a chilled glass of Txakoli or Godello with your tapas.

Dish to order: It's a toss-up between their super cheesy Ossau-Iraty & Idiazabal croquetas and the Cinco Jotas Ibérico pig cheeks with parsnip puree. Sod it, have both. 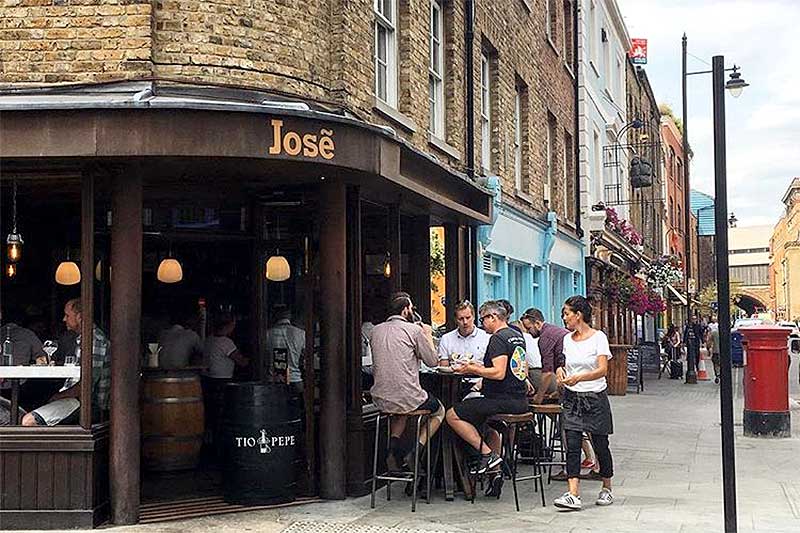 They say great things come in small packages and that’s 100% the case with chef José Pizarro’s Bermondsey tapas spot. He has two other restaurants, but this is probably the one you’re most likely to spot him, chatting to customers as they prop up the bar or nab one of the must-prized stools.

Dish to order: obviously a plate of jamon and a glass of Fino would go down very nicely, but you simply have to order the boquerones. 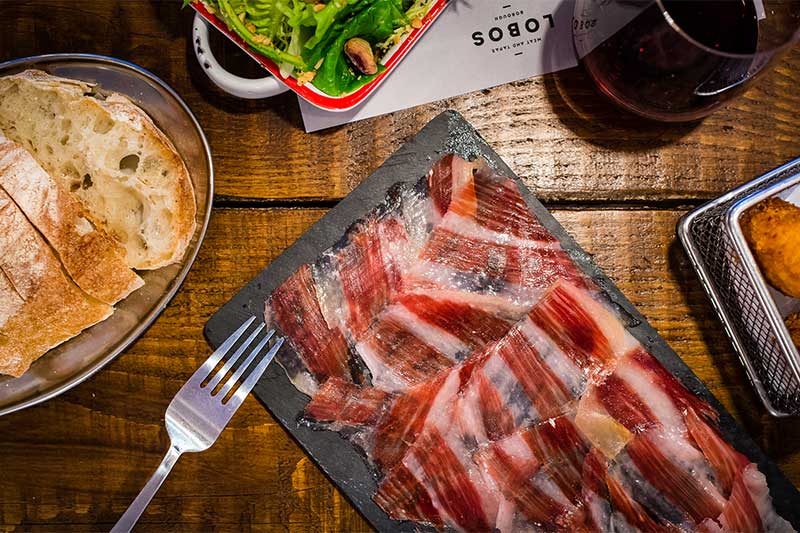 Lobos chef Roberto Castro, Joel, Cortés and Ruben were all friends who met working at Tapas Brindisa and when they teamed up with restaurateur Ellen Chew they realised their dream of opening their first garito (neighbourhood joint) in Borough. Of the two branches, the Borough is definitely the more atmospheric.

Dish to order: The Iberico pork selection is a sharing platter of Pork Fillet, Secreto and Presa 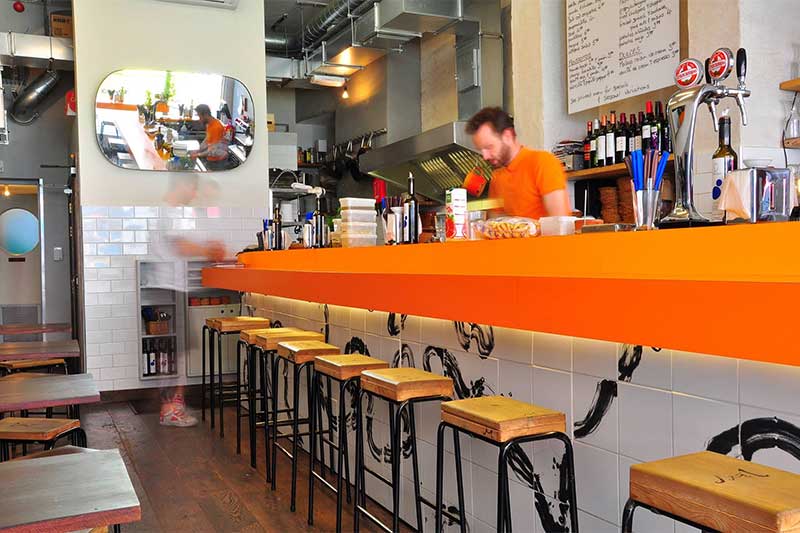 Sam and Sam Clark first opened this tiny offshoot of their popular Exmouth Market restaurant Moro in 2010. Part tapas, part mezze bar, it’s now expanded to Hackney and both places serve up a super selection of twists on classic tapas and dishes that flirt with a North African theme.

Dish to order: Kick off with the quail's eggs with cumin and salt before ordering the crispy aubergine wedges with whipped feta and date molasses. 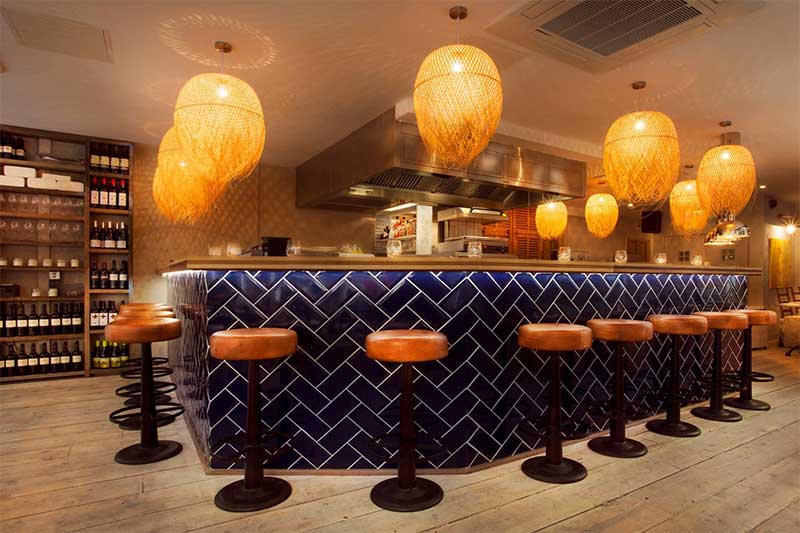 Restaurateur Victor Garvey had already cut his teeth at Bravas Tapas and Encant when he opened this little slice of Barca joy in the heart of Soho. The breezy vibe and great food made it an instant hit. More recently they added an ice counter so you can now order super fresh seafood and shellfish from Catalunya and Galicia too.

Dish to order: Get a bit of tableside theatre with the Chorizo 'al infierno' - flambéd in pear liqueur in front of you and served with caramelised onion and parmesan toast. 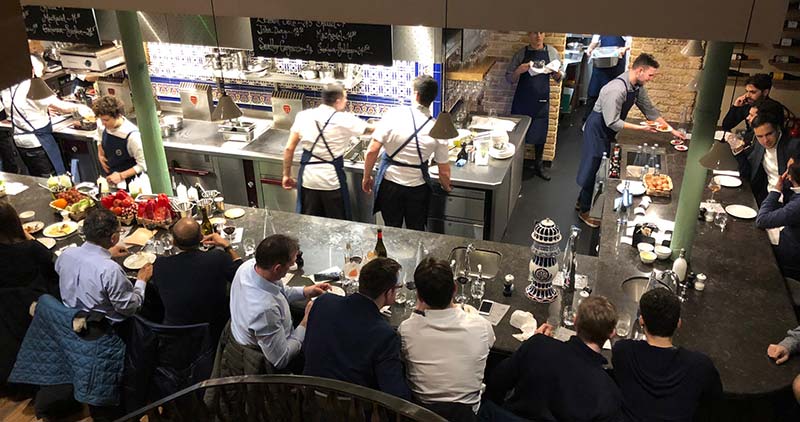 Expectations were sky high when Nieves Barragan moved from Barrafina to set up her own restaurant with GM José Etura. From the word go it was a huge success and you honestly feel like you could be sat in a tapas bar in Madrid rather than just off Regent Street. Yes, it’s hard getting a seat on the ground floor but it’s worth the wait.

Dish to order: Whatever fish is currently being served with the arroz. And if you’re dashing in and out - the Camarones Fritos & Fried Egg at the bar. 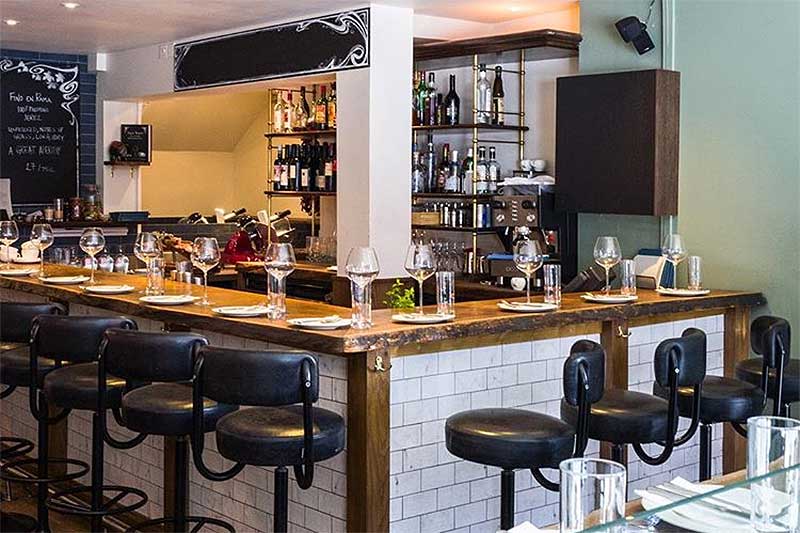 Any tapas roundup is going to have a lot of jamon mentions, but if you're looking for a top veggie pick, then Salt Yard is just the place. Since opening way back in 2005 their courgette flowers, stuffed with Monte Enebro goat’s cheese, lightly deep fried and drizzled with honey haven't been off the menu.

Dish to order: The courgette flowers, of course, and for the group that launched the Croqueta Challenge, how about the pork belly, leek, manchego croquetas with salsa rosa too?

Trangallan - “pretty much my dream local" said Marina O'Loughlin of this Stokey favourite.

Camino - With various branches, this chain still prides itself on its sourcing of impeccable Spanish ingredients

Barcelona - old school bar in Whitechapel (although Barcelona I was still the best...)

The Tapas Room - this Tooting Market spot is great for Basque food in particular.