London's best Christmas food specials for 2015 - the Pret Christmas sandwich and beyond...

Here at Hot Dinners, we LOVE this time of year. The countdown to Christmas has well and truly kicked off and that brings with it the best thing of all - Christmas themed dishes and snacks. Restaurants, sandwich shops and more go a little bit mad in the pursuit of the best festive food.

We've rounded up some of the best below and we'll be updating this page regularly with more wonderful festive goodies in the run up to the big day. 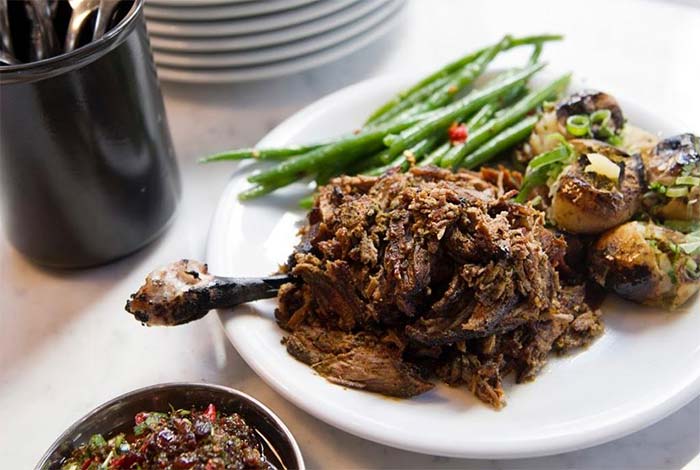 Dishoom's Christmas special is the Turkey Raan. That's a whole turkey leg prepared in the traditional Indian Raan style, marinated and cooked slowly over a day. It's served with Bombay-style potatoes, masala winter greens and spicy cranberry chutney and is on the menu now at £24.50. 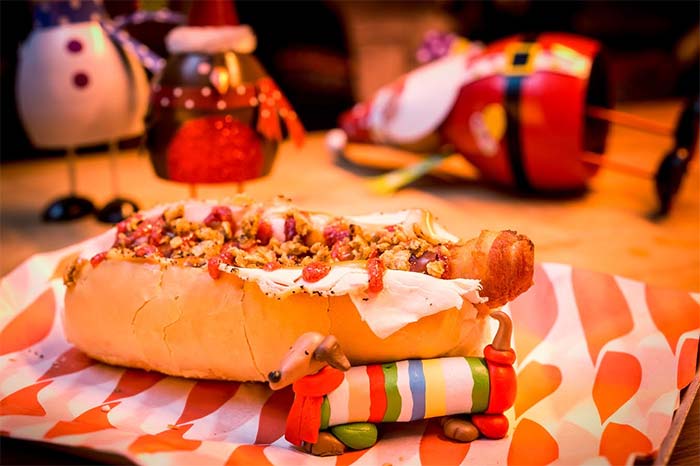 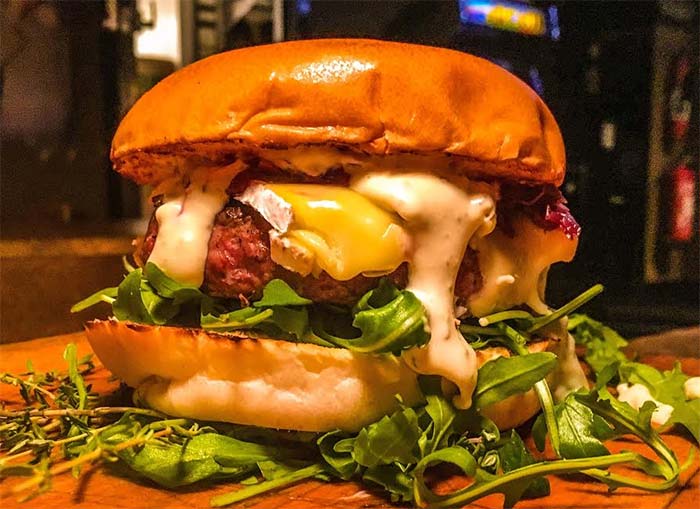 Tommi's Burger Joint has added their limited edition venison burger to the menu - that's a venison patty topped with brie, rocket, pickled red cabbage, green pepper mayo and cranberry sauce. It's available now until the end of December. It's £9.90, and for every venison burger bought £1 will be donated to Scope. 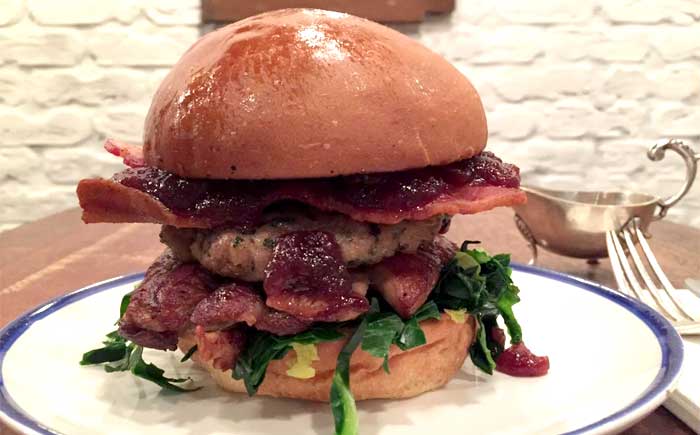 The Blacklock Christmas sandwich features turkey rubbed with an in-house mix of Christmas spices, grilled over their famous charcoal grill and tucked into a toasted demi-brioche bun. To that they've added a homemade sausage and onion patty, crispy Middlewhite bacon, cranberry chutney and steamed greens and plenty of gravy to dunk it all in. Available now until Christmas for £10. 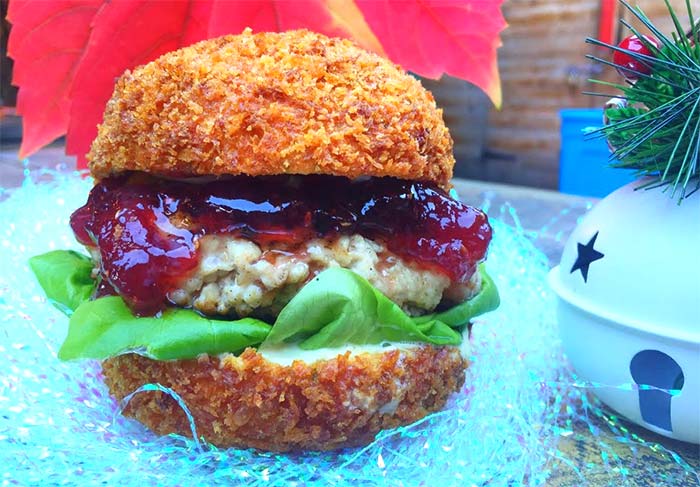 Yeah Burger's Christmas specials include confit duck, venison and more - but it's the Turducken that is the winner here. It's "Free Range Turkey Burger and Cranberry Port Jelly inside a Chicken Mince Scotched Duck Egg".

It's on sale at Yeah Burger's residency at The Star of Kings in King's Cross for £15 from December 1. 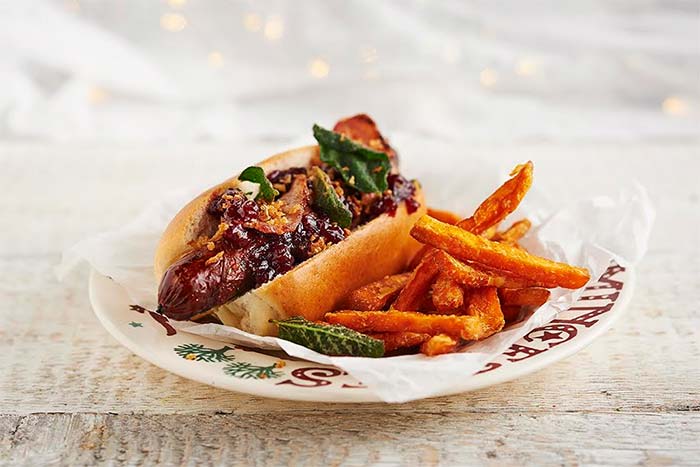 This is Top Dog's Christmas in a Blanket - that's "artisanal, hand-selected, free-range smoked pork dog wrapped in bacon and smothered with crispy shallots, pan-fried sage and cranberry sauce." It's on sale at Top Dog in Soho from 1st December for £6.95. 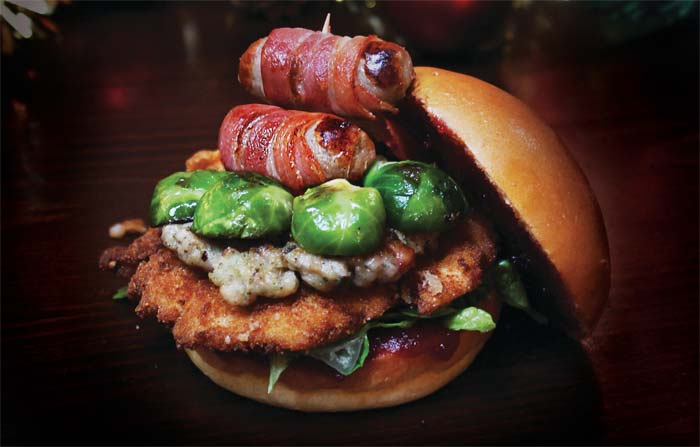 Another example of distilling the Christmas lunch into one dish is this behemoth from Hache. This creation is turkey in buttermilk, dusted with breadcrumbs, topped with home-made pork and sage stuffing, salt cured bacon wrapped chipolatas and grilled Brussels sprouts, served in a lightly toasted, soft brioche with cranberry dressing. 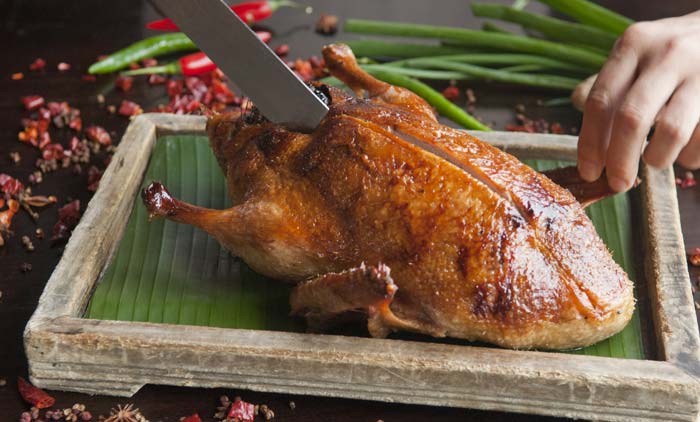 Hutong at The Shard are doing a goose with a difference from 30 November until 30 December. It's a whole roast goose - Marinated for 12 hours using traditional Chinese spices- served with butterfly buns and three special sauces: roast goose gravy, black pepper sauce and home-made plum sauce. 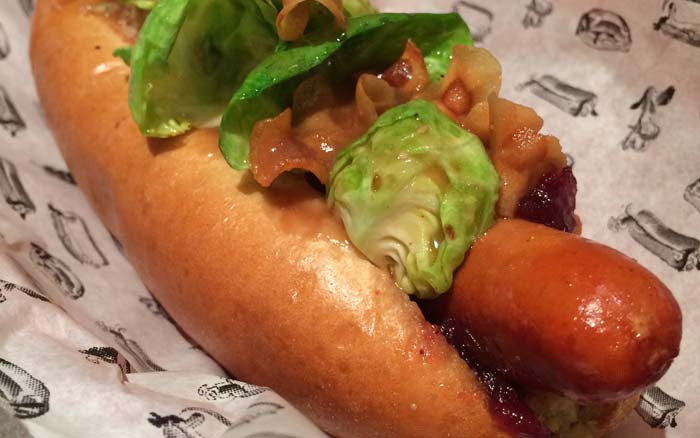 Bubbledogs is getting in on the Cristmas special action with Santa’s Sausage - a hotdog loaded with stuffing, cranberry sauce, brussel sprouts and gravy. It'll be £7.50 and will go on sale 1st December. 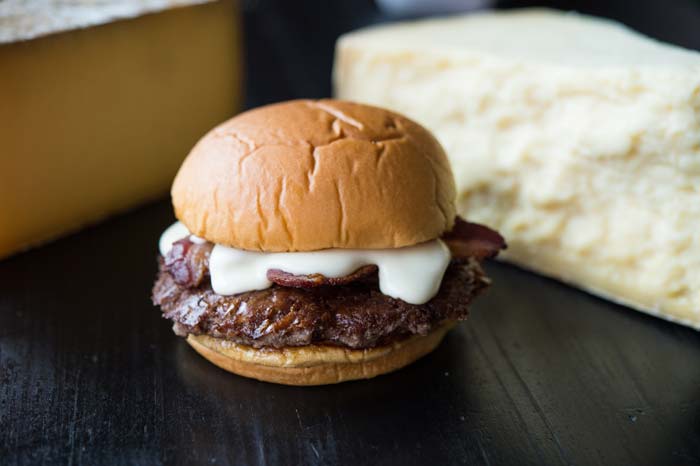 Shake Shack's Christmas special is more of a winter special - the Alpine Bacon Burger (£7.25) beef burger topped with melted Appenzeller cheese sauce and British free range Wiltshire cure smoked bacon. The also have mulled wine and their Salted Caramel Hot Chocolate is back again too. It's available from 10 December. 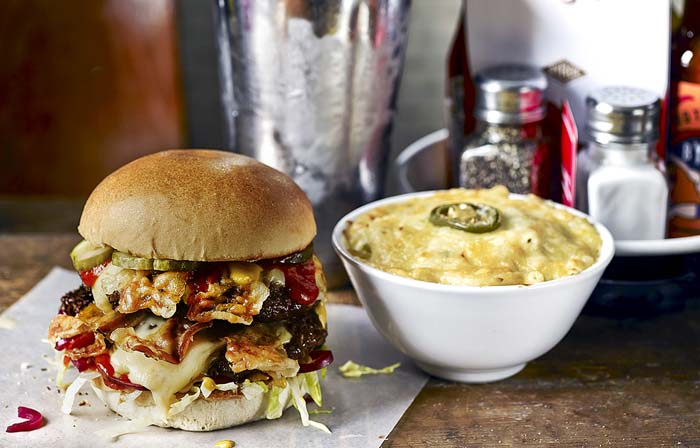 Making a return to Byron this year is their epic Father Cheesemas. It's on sale now right up until January 4th, costs £12.95 and is: two 6oz hamburger patties, bacon Freddar cheese [Fred Smith’s own recipe, from mature Cheddar, Monterey Jack and Grana Padano, plus bacon pieces), crispy pancetta, chipotle ketchup and honey-mustard sauce, with sliced pickles. 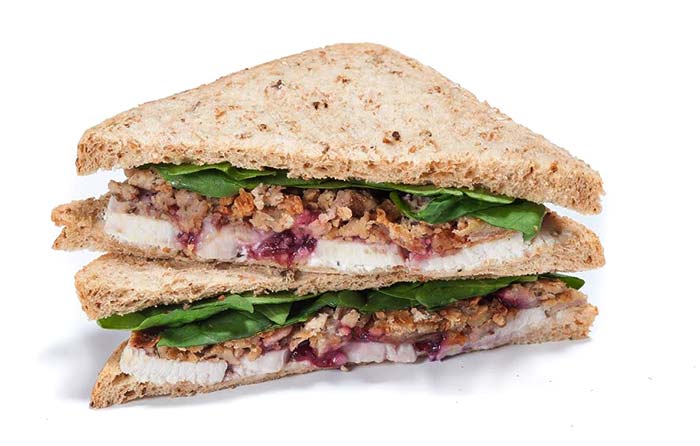 The big one - the Pret Christmas sandwich (£3.60) is such a huge thing it even gets a countdown clock in the run up to the big event. On sale from noon on November 10, expect British turkey with sausage & sage stuffing, crispy onions, cranberry & port sauce and fresh spinach. They've a veggie version too.

If you fancy something new, Pret has a beef wellington baguette this year too - with layers of rare roast British beef, topped with mushroom duxelles (pâté made with closed cup mushrooms, onions and garlic) and fresh watercress for £3.99. 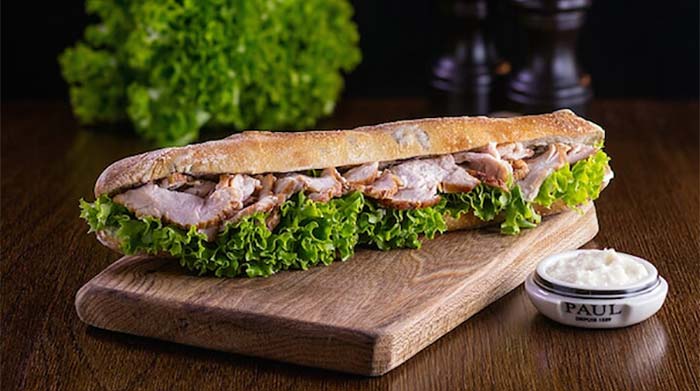 This is the Dinde de Noël, available at all Paul bakeries. It's and artisan cranberry baguette, loaded with succulent sliced turkey, crisp lettuce, rich cream cheese and horseradish sauce. It's on sale now until 24 December for £4.50. 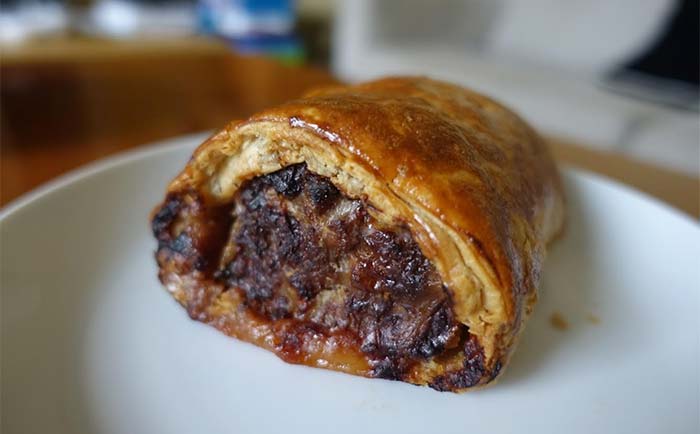 Now here's one we've actually had the pleasure of trying (that very one pictured above) - it's the Ginger Pig Christmas sausage roll with pork sausage meat, chunks of English stilton and fresh cranberries in butter puff pastry. We're always partial to a Ginger Pig sausage roll and this was excellent. It's available from 16 November 2015 until the New Year for £4 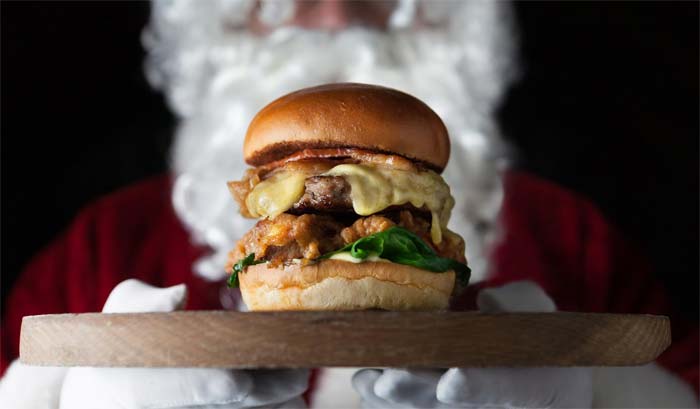 Available from 23 November, another majestic burger appears - the Hawksmoor Christmas burger. It'll be available at Hawksmoor Knightsbridge and the Hawksmoor Spitalfields Bar. It's buttermilk fried turkey topped with a sausage patty made from Ginger Pig Tamworth pork, along with crispy smoked bacon, sprout tops, spiced cranberry ketchup, a cheeky slice of Ogleshield cheese and turkey gravy for you to French Dip the whole thing in. Blimey.

And this year they also have the Christmas Nugget - minced buttermilk fried turkey thigh, Ginger pigs in blankets (a Ginger Pig sausage patty and bacon) wrapped around a melting cheese sauce core with a panko crumb, served with cranberry ketchup. We want that NOW. 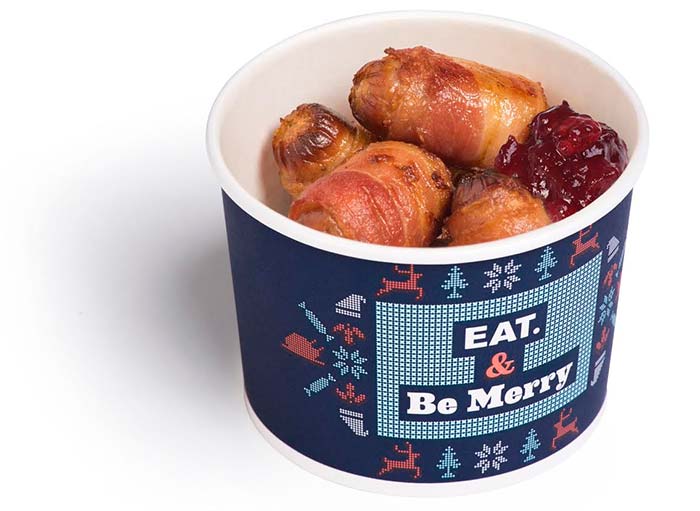 Pret aren't the only sarnie shop in town and Eat also have their Festive Full Works bloomer back again (a personal favourite from 2014). But they've something non-sandwich related which sound like they may become very addictive - pigs in blankets. You can have a pot of these for £2.49 or in a roll for £3.50. And there's a new Turkey bacon and stuffing pie and mash for £6.49. 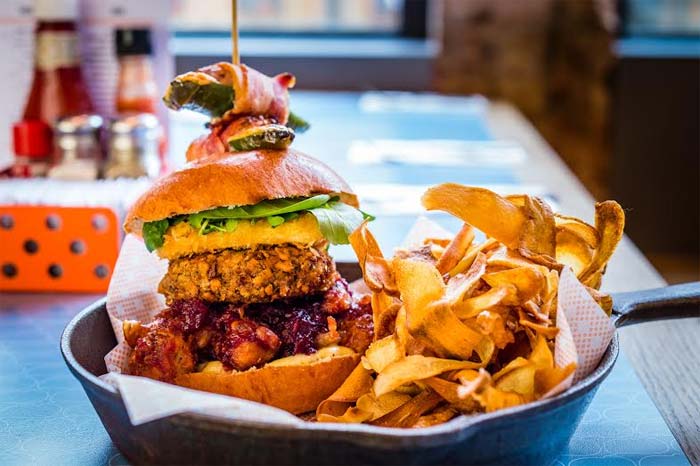 This Behemoth is the Christmas burger from fried chicken specialists Bird. It's described as "Christmas Dinner in a burger" and goes on sale from 17 November at the Shoreditch and Islington Birds. It's a burger with cranberry-glazed crispy fried chicken, sage & onion stuffing, panko-crusted fried brie, topped with bacon-wrapped jalapeno poppers and served with fresh parsnip crisps. Yes, that's pretty much all the Christmas dinner. 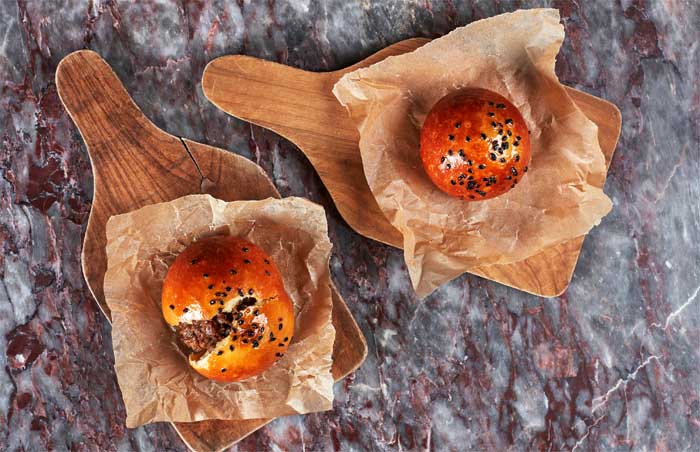 The crab doughnuts at Chiltern Firehouse are one of London's must-have dishes and now Nuno Mendes is using the same dough for some special Christmas buns - the braised short rib and truffle roasted buns go on the menu on November 27 for £3 each. 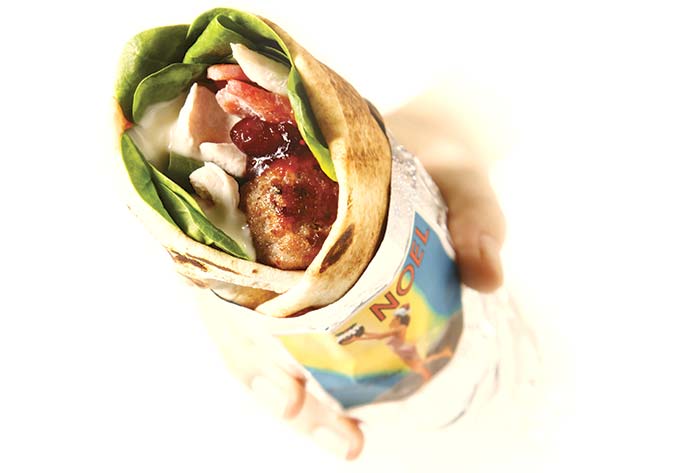 Leon are back with their special from November 23 - British turkey from Norfolk & Lincolnshire, wrapped up with pork, sage & onion stuffing, ham hock, fresh spinach, tarragon mayo and a cranberry & port sauce at £5.25. 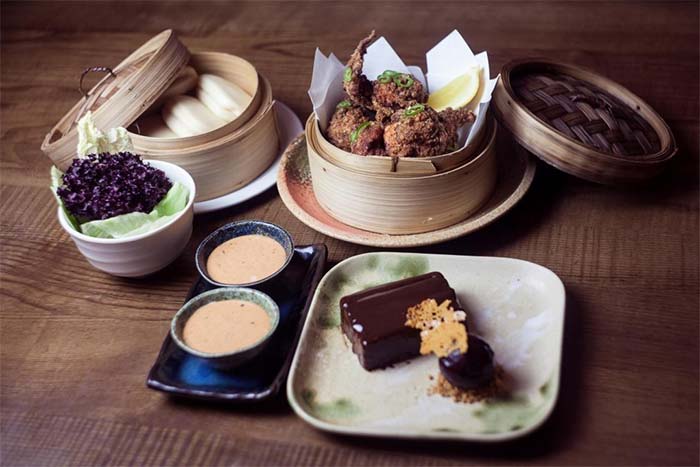 Flesh & Buns are bringing back the JFC Festive Feasting Basket on December 1 - a steamer basket of buttermilk and shichimi fried half-chicken with BBQ mayonnaise with salad and buns on the side. Plus chocolate Yamazaki cake, all washed down with a spiced rum and grenadine hard shake. £37 for two people. 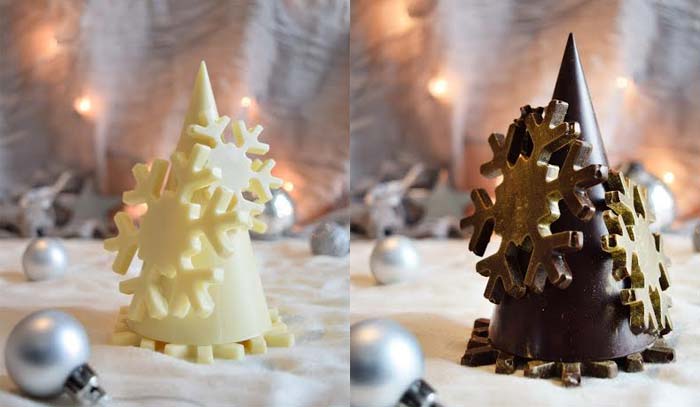 But it's not all about burgers and sandwiches.We love the look of these mini snowflake trees (£14.95) from Paul A Young. They're supposed to be a table decoration, but we don't think they'd last 5 seconds on our table before being devoured.

Have we missed out your favourite Christmas special? Let us know on Twitter, on the comments below or contact us here.

The food and drink Christmas round up

Everything you'll ever need, from Christmas specials, where to have a party, hampers under £50, post-shopping eating and what to do for New Year.