We pick out some of our favourite spots in town to enjoy a platter of the briny bivalves, whether it's year-round rocks or natives you're after. 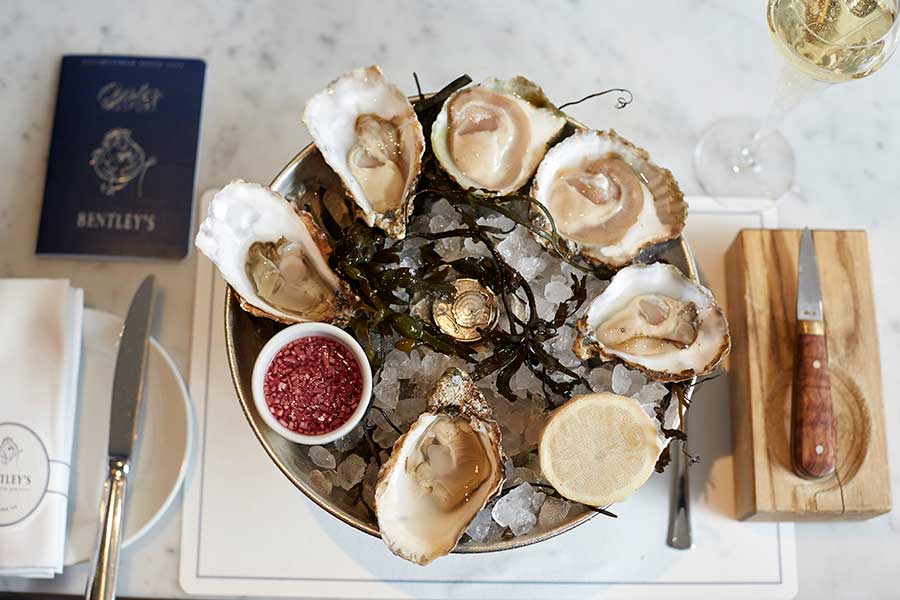 Ever the classic oyster venue choice, Bentley's boasts that it shucks more oysters than any other London restaurant - around 1000 a day on busy days. Perch yourself at the original marble oyster bar and choose from wild natives and rocks. In season they serve three types of native oysters: West Mersea, Loch Ryan and Galway. If you want to get more serious, then book a spot at one of their regular oyster masterclasses on a Saturday.

Find out more about Bentley's 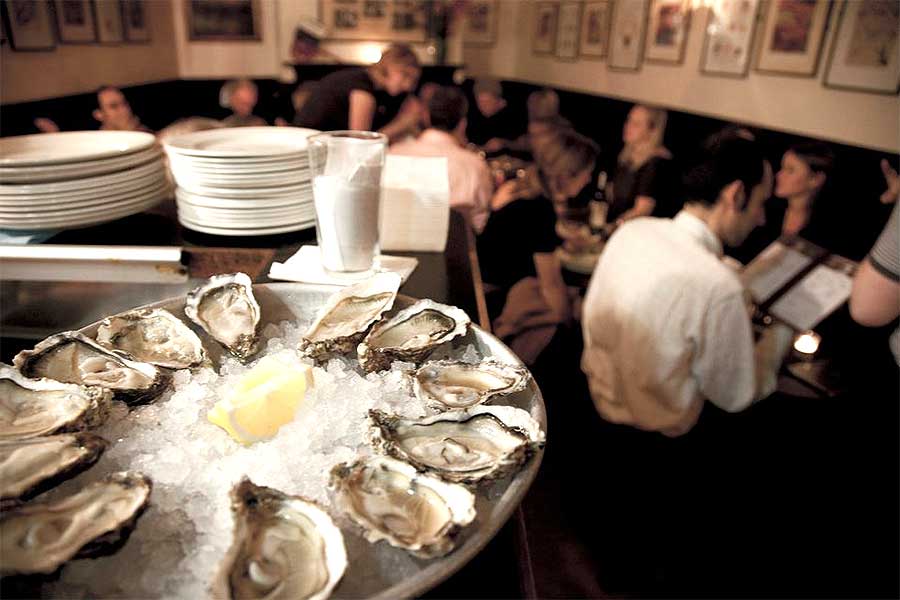 Tom Conran's Westbourne Park Road gastropub has all the fripperies you could want from a place with such an obvious focus on beer and oysters.  Match a creamy pint of Guinness with 6 rock oysters for a perfect night out. Oh and you might spot David Beckham having a pint in the corner as this is one of his locals.

Find out more about The Cow 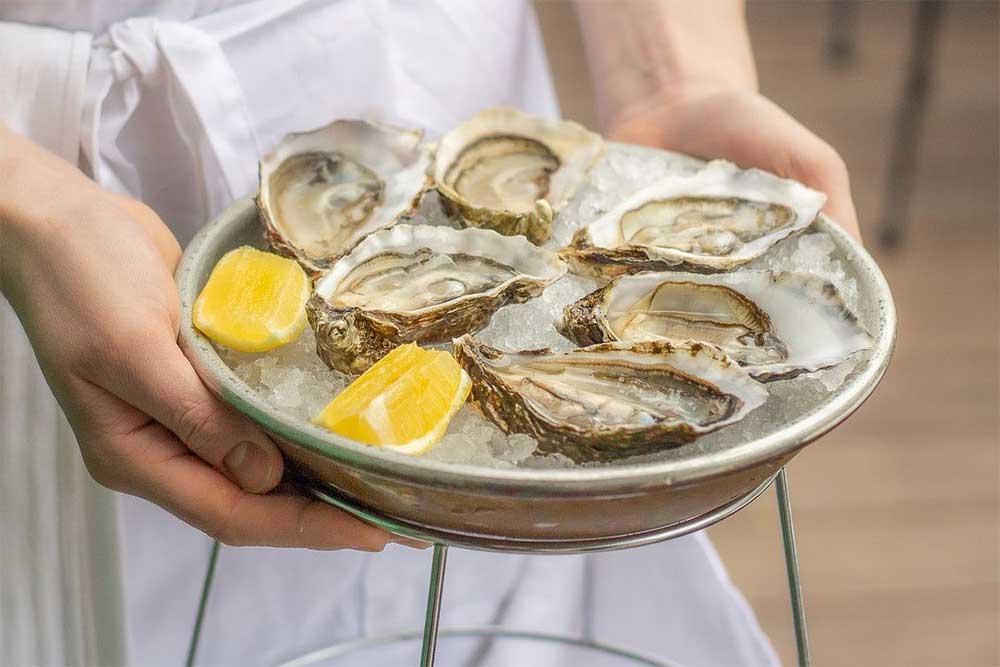 Robin Gill's well-reviewed restaurant right beside the American embassy bills itself as an oyster bar first and foremost. This is a super spot for trying super fresh Irish oysters - right now it's Carlingford Loch that they're serving up.

Find out more about Darby's 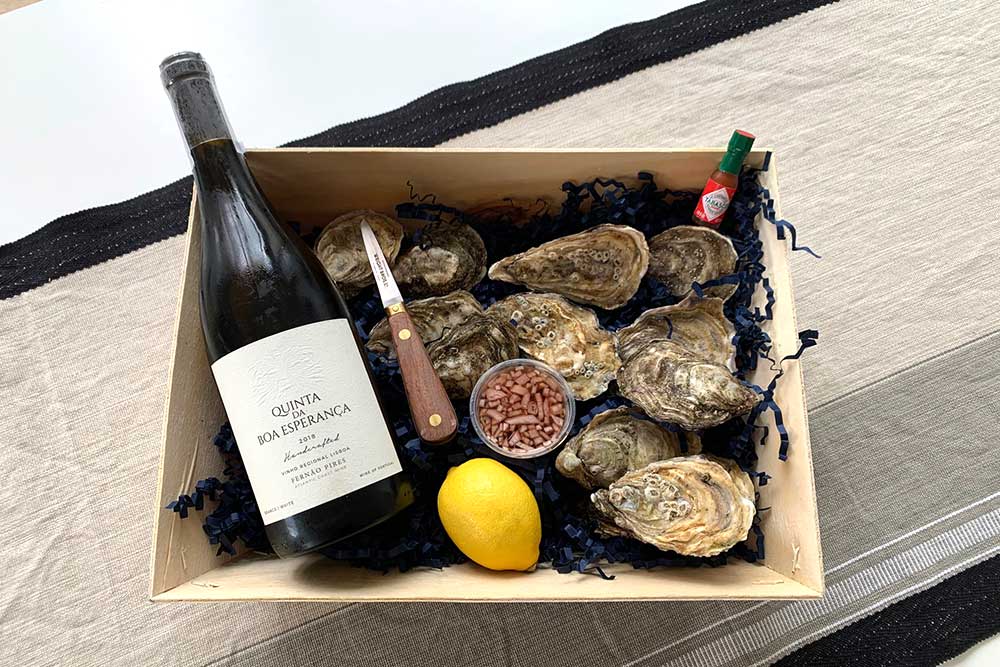 As a fishmonger and a restaurant you can expect the haul at this boutique restaurant group to be super fresh and rock oysters are always on the menu here.

Delivery option: The FishWorks’ Oyster & Wine Box features a dozen oysters along with lemon, merlot shallot vinegar, and Tabasco plus a bottle of Fernão Pires white wine, a shucker and a link to a ‘How to Shuck an Oyster’ video tutorial. Order online here.

Find out more about Fishworks 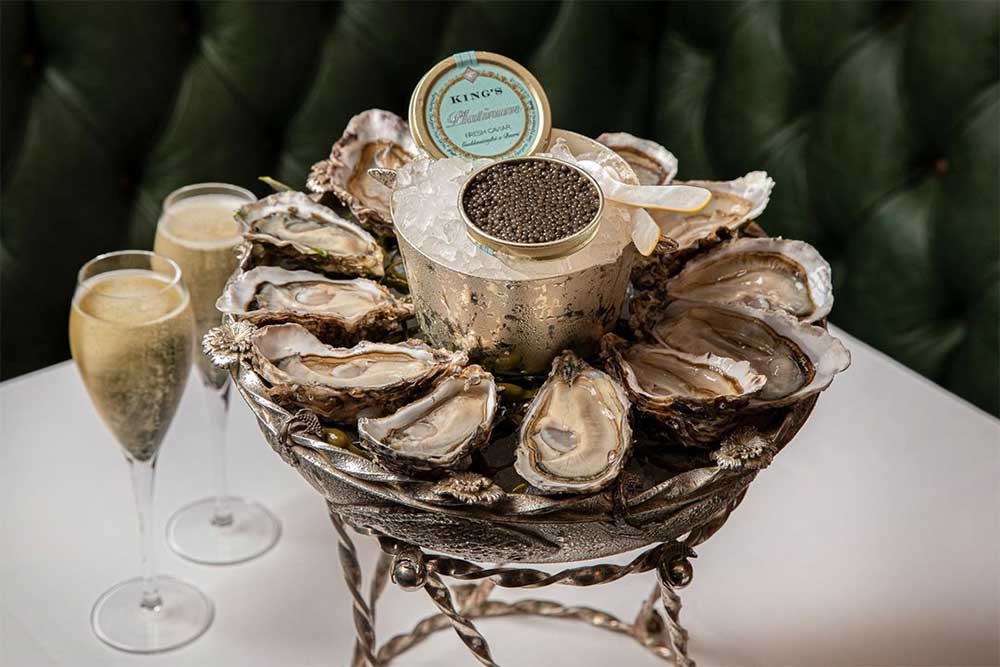 Right in the heart of the West End, you can always rely on Sheekey's to shuck a decent oysters or two. Head for the main restaurant (and its terrace) where - in season - there's usually a choice between Lindisfarne, Carlingford and Jersey oysters. To celebrate their 125th birthday this year, they've a special of a dozen mixed oysters, 20g of Platinum caviar and two glasses of Champagne for £125.

Find out more about J Sheekey 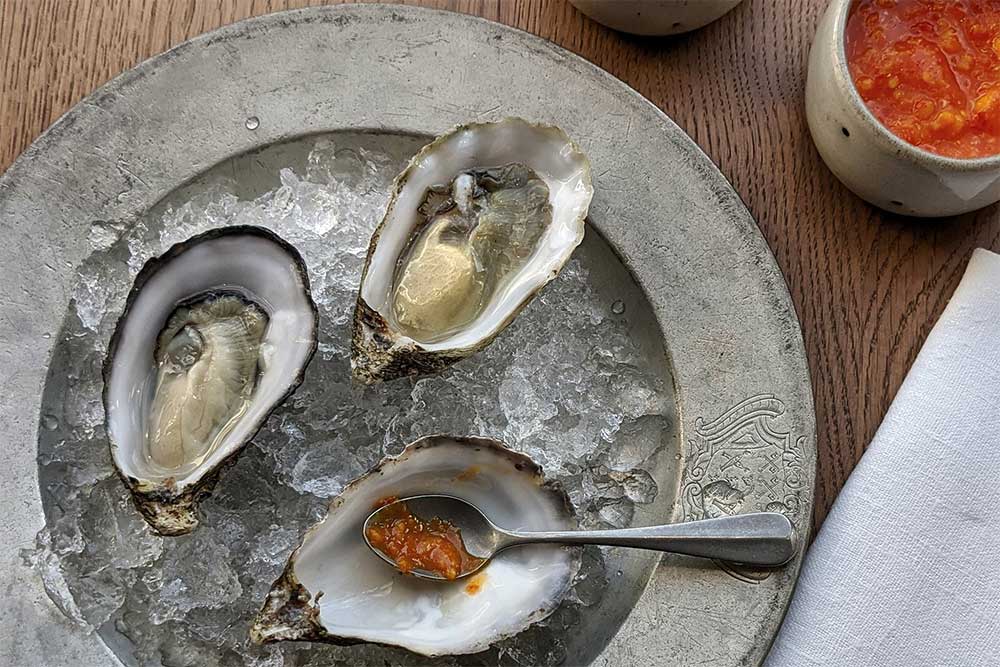 Jackson Boxer's Notting Hill restaurant prides itself on its seafood - and there's usually oysters to enjoy on the menu. Right now they're serving Morecambe Bay Oyster with blackberry aguachile and they're half price during the week between 5 and 7pm.

Find out more about Orasay 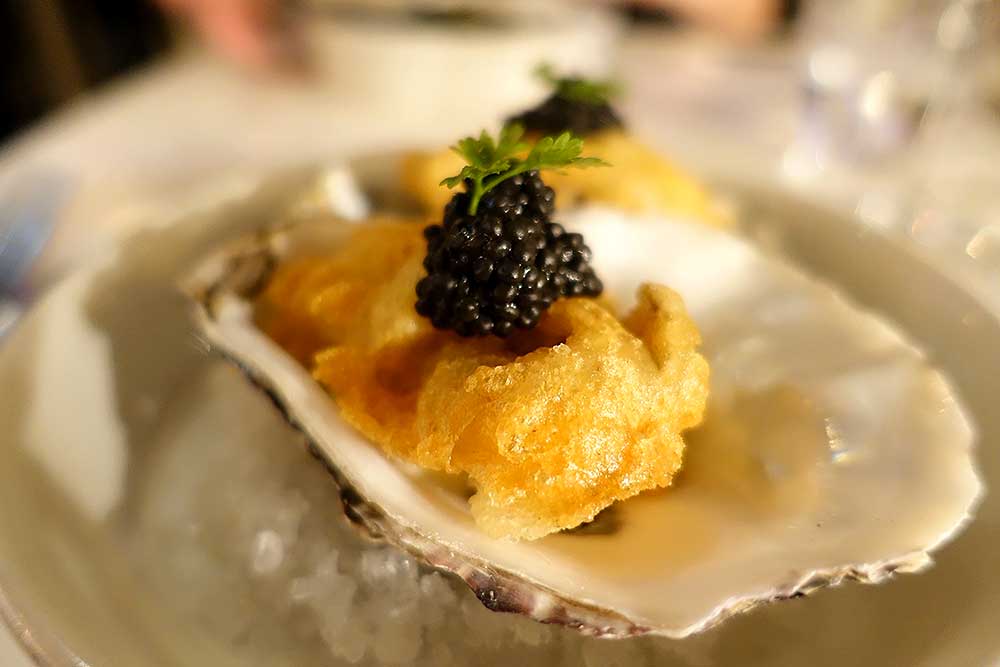 Friends Matt and Rob first came up with the idea for their seafood business when shucking oysters at Matt's wedding and their Covent Garden restaurant has doubled in size since opening. Sit up at the counter and enjoy watching oysters being shucked in front of you. If you prefer them cooked their Tempura oysters with Champagne aioli and smoked herring caviar are amazing.

Find out more about The Oystermen 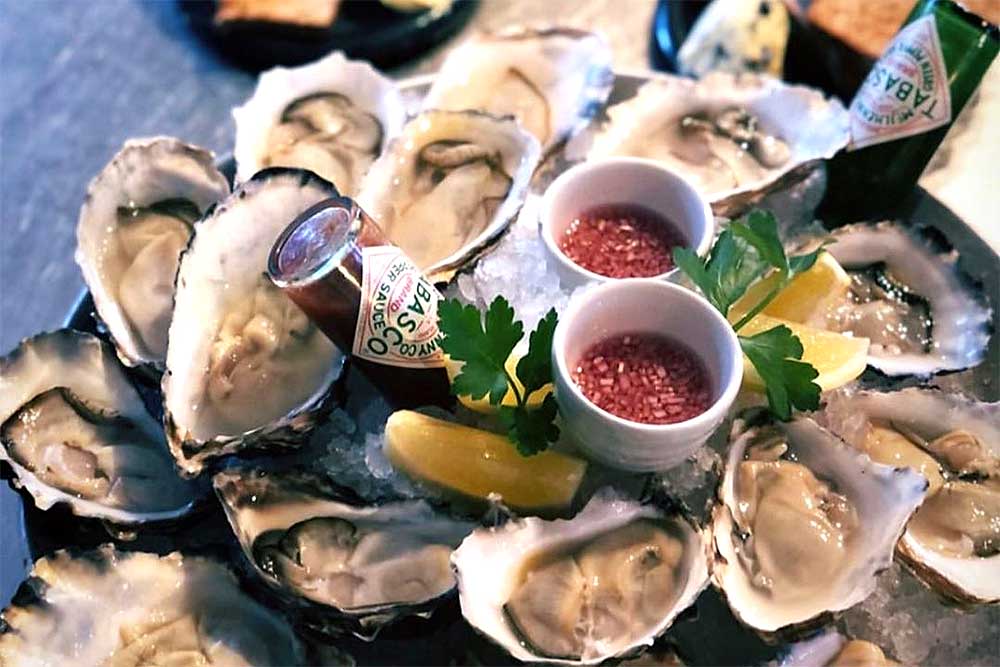 Prawn on the Lawn

Prawn on the Lawn serves top notch oysters alongside its larger menu. That menu changes depending on the season, but there's usually Porthilly rocks on their which you can also have deep-fried with garlic creme fraiche.

Delivery option: There's a fishmongers section by the entrance if you just want to take the oysters home with you instead.

Find out more about Prawn on the Lawn 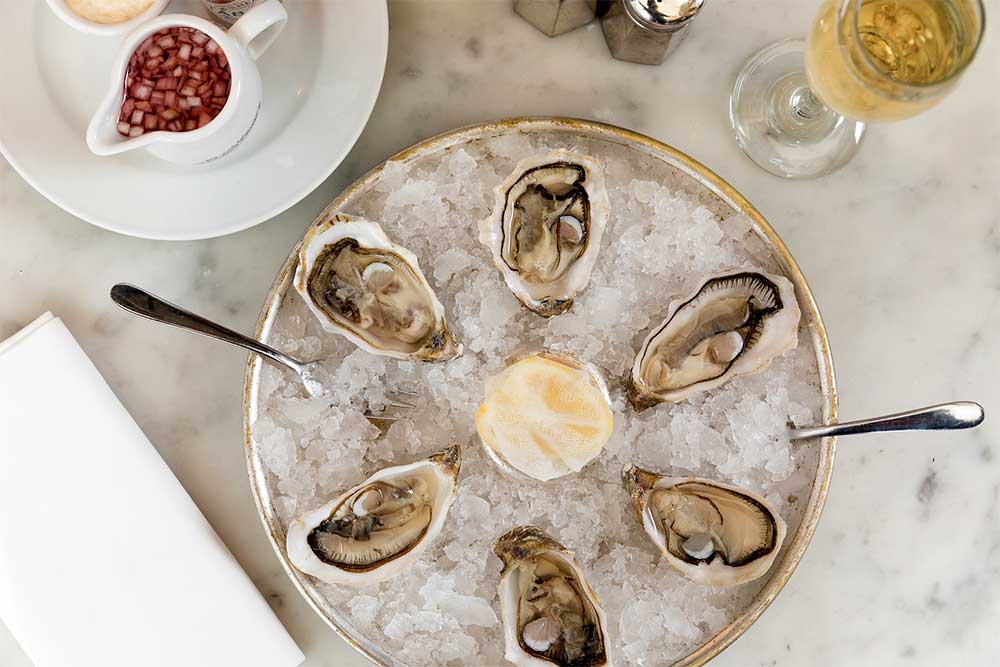 There's nothing quite like the classic platter at this Soho stalwart. Choose between English or Irish rocks. Enjoy them out on their astroturfed terrace on Brewer Street or book their very cute private back garden if you want to dine both alfresco and in seclusion.

Find out more about Randall & Aubin 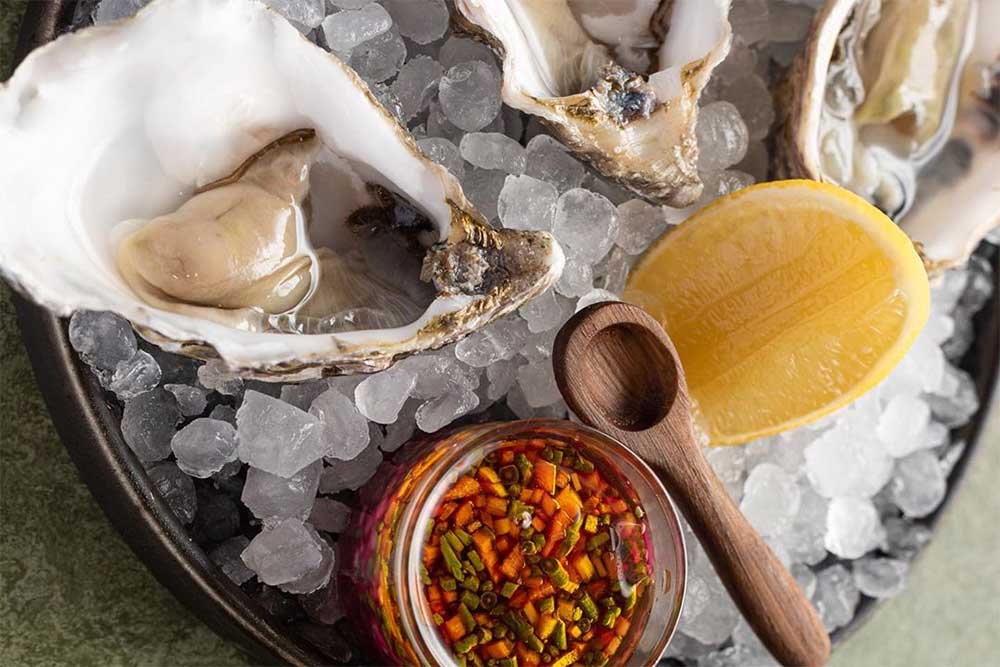 The Sea The Sea

This Pavilion Road spot describes itself as a "chef-led fish shop, deli and seafood bar" - so you can buy oysters to take home and shuck yourself, or order them to enjoy up at the counter or out on their terrace, dressed by chef Leandro Carreira.

Find out more about The Sea The Sea 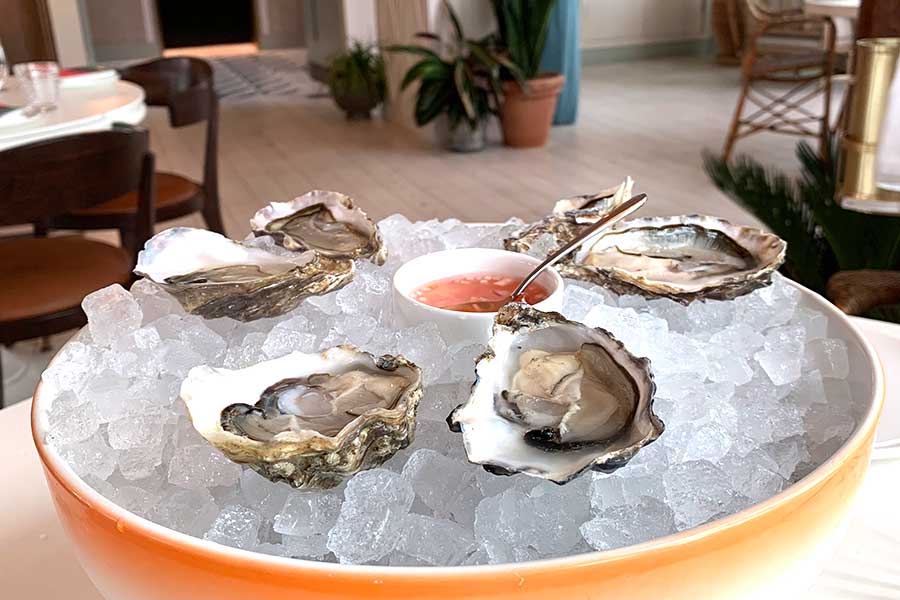 This rooftop restaurant features what they boast to be London's longest oyster list - it's an entirely separate menu. So if you're looking for briney delights from Menai, Gillardeau or Wexford then you've come to the right place.

Find out more about Seabird 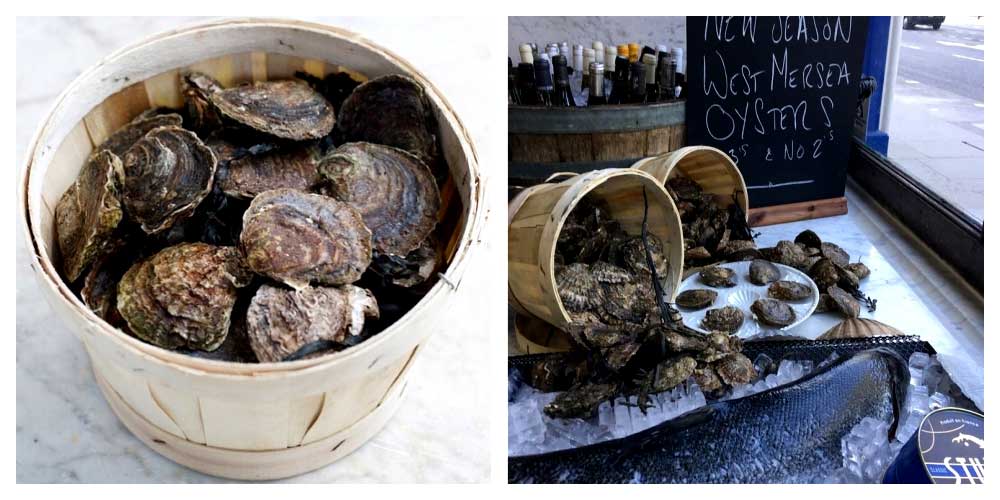 The original Sweetings opened in Islington back in 1830 before eventually moving into Queen Victoria Street and it's been serving up shellfish to Londoners ever since. It helps to be living or working in the City to eat here - it's only open on weekdays for lunch.

Find out more about Sweetings 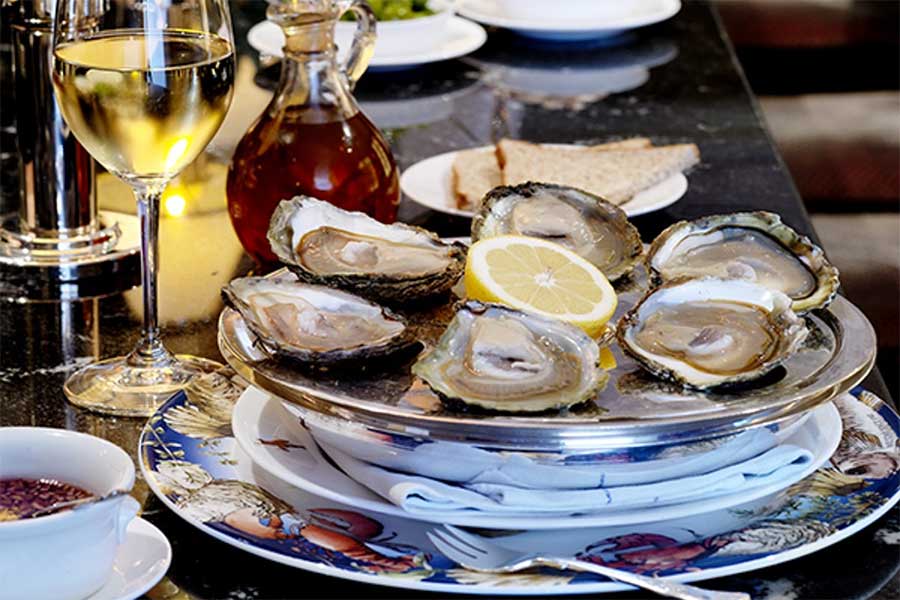 One of London's oldest restaurants (it's older than the USA basically), you can pop yourself up at the oyster bar and order half a dozen Jersey Rocks or Loch Ryan natives, when in season. Alternatively you can have them done Rockefeller, Kilpatrick or Beau Brummell (chilli sauce and fried in breadcrumbs) style. For September, they're holding two hour oyster shucking masterclasses in collaboration with Nyetimber.

Find out more about Wiltons 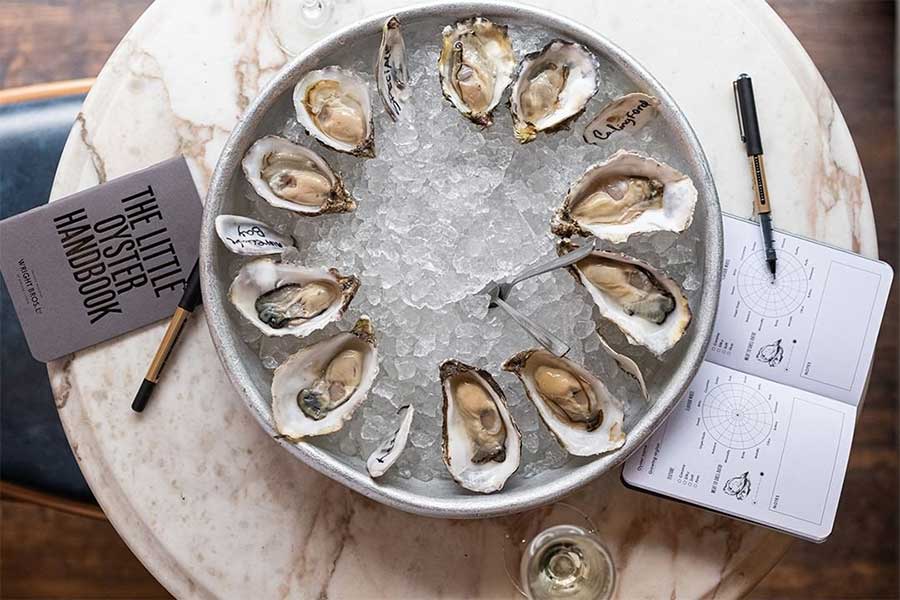 It's no surprise that the secret to a great spot to eat oysters is an impeccable source and the Wright Brothers' oysters are right up there. There's usually a wide selection including Ostra Regal from Bannow Bay and Morecambe Bay oysters.

Delivery option: For online delivery from their own shop choose from a dozen Jersey, Carlingford or Morecambe oysters.

Find out more about Wright Brothers

Other places to try oysters in London 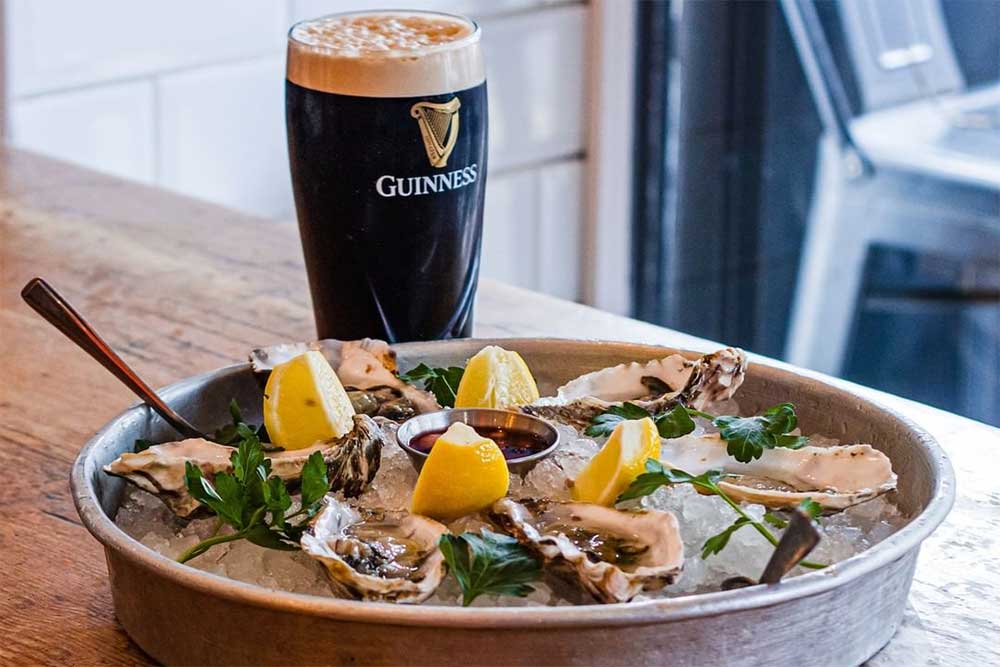 Sutton and Sons (Stoke Newington and Islington) - This modern chipper offers one of the best oyster deals to be had in London - half a dozen Maldon oysters, freshly shucked for £8.95 (pictured above).

Fish Market (Broadgate) - Set in one of the oldest surviving East India warehouses in the City, this laid-back restaurant features all manner of shellfish on its menu including Jersey Rocks and Carlingford.

London Shell Co - If you're dining on their moored restaurant The Grand Duchess, there's a choice of Carlingford Loch oysters - either plain or with cucumber, horseradish and cider vinegar 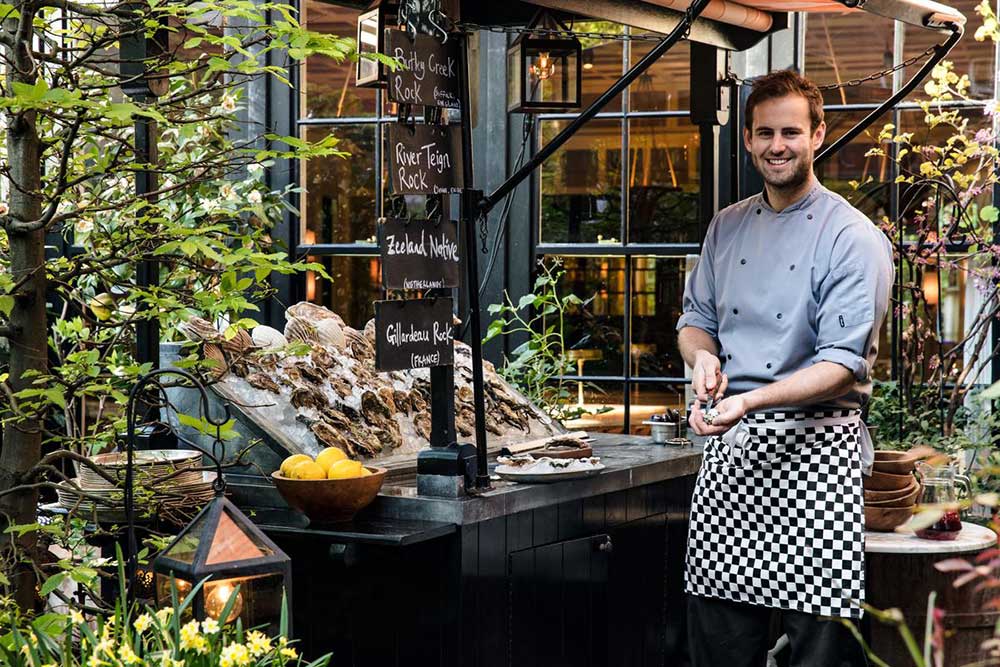 Chiltern Firehouse - You'll find Bobby Groves with his cart of oysters in the courytard at Chiltern Firehouse. And, if you want to read up on the briny bivalves, his book Oyster Isles is now out in paperback.

Bob's Lobster - although their main focus is, of course, lobster, oysters are also served at this London Bridge spot. Choose between raw or grilled with a chopotle and bourbon butter. They also run an oyster happy hour ever weekday between 4-6pm with £1 oysters when ou buy a glass or bottle of wine.

Brat: Everything is cooked over fire at this Shoreditch restaurant, including the oysters roasted with seaweed. 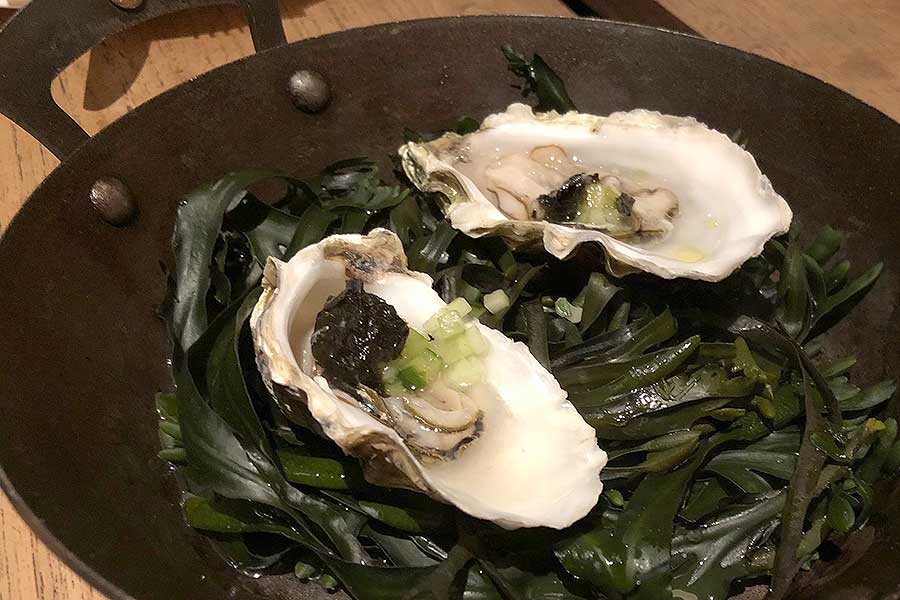 Head to the new Magritte Bar at The Beaumont where the snacks bar includes Irish rocks or Jerseys with a seaweed mignonette. 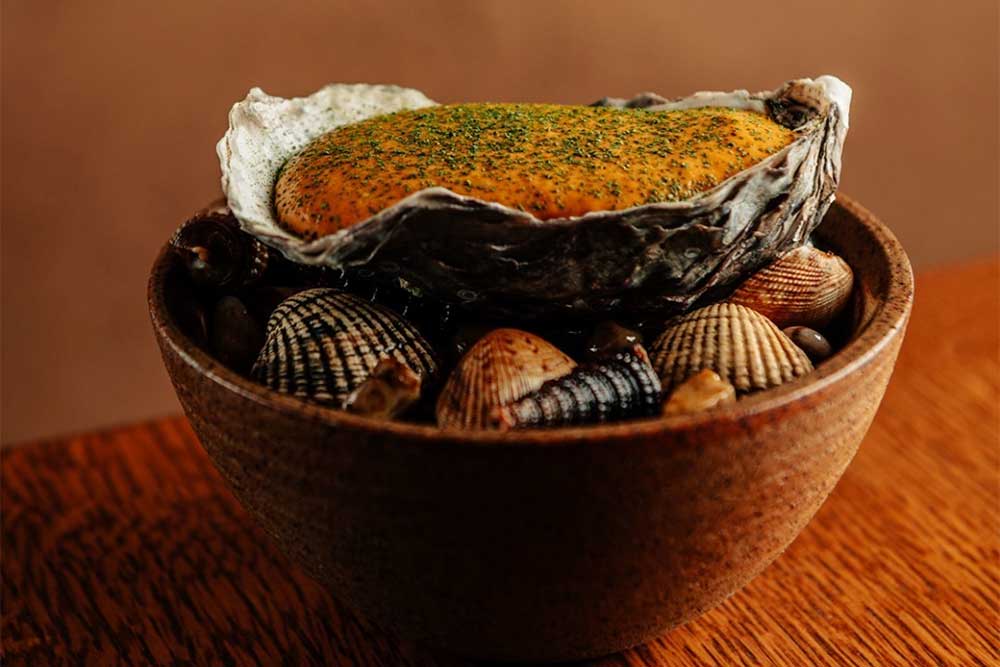