Keeping a restaurant enticing to Londoners, and relevant, after the honeymoon opening period is hard work. So clearly restaurants that are hitting milestone birthdays must be doing something right. Our crop of this year's Test of Time restaurants are pretty impressive, but it's going to take a lot to beat one restaurant in St James... 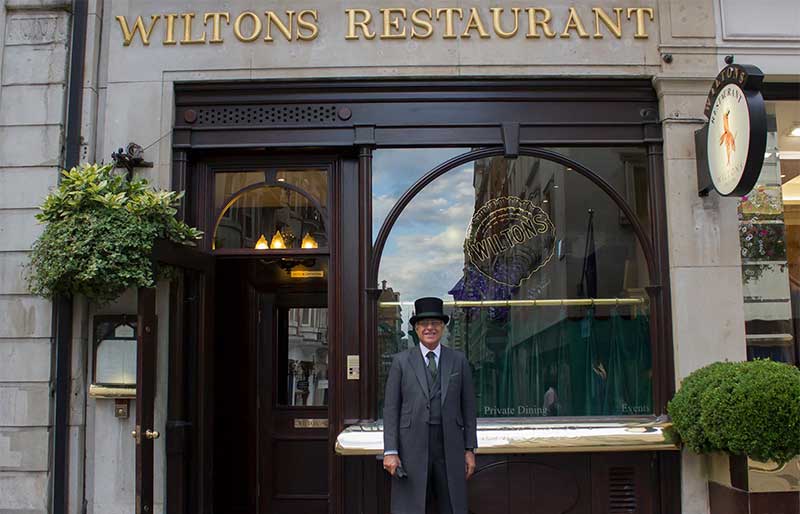 It may be London's oldest restaurant (although this is contested by Rules) but Wiltons moved place five times before finally coming to rest on Jermyn Street where it's been since 1984. It's been through a fair few owners too, but the story we like most is the transition in 1942 when the sale to diner Olaf Hambro was concluded by the cost of the restaurant being added to his bill that night.

Age: 275 - they proudly boast that they're older than the United States of America

Original dishes still on the menu: Wiltons started life as a shellfish stall, so order the oysters and you'll be continuing the thread of history. 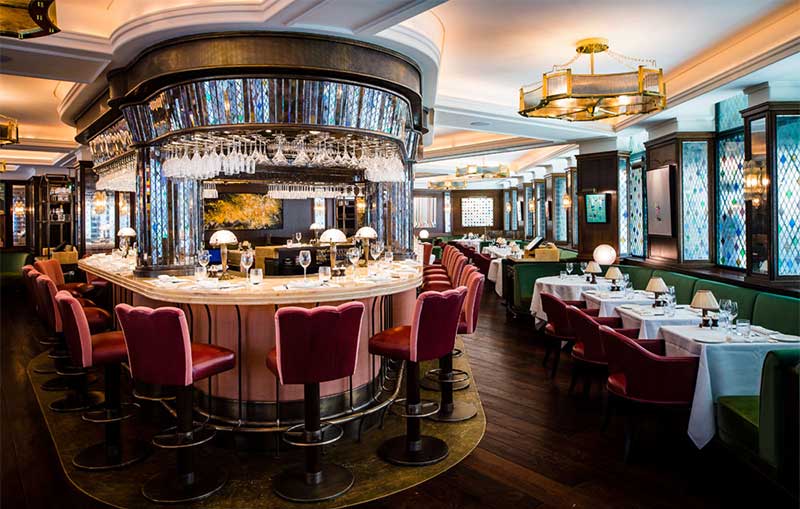 This actors' cafe was opened a century ago by Abel Giandolini and Maître d’Hôtel Mario Galatti. Legend has it the name came from an exchange between Galatti and actress Alice Delysia. Galatti was apologising for building works but Delysia reassured him, quoting a popular ditty, saying: “Don’t worry, we will always come to see you, we will cling together like the ivy.”

Original dish still on the menu: none - although the Bang Bang chicken and shepherds pie have been on the menu for a long time.

Celebrations planned: The Ivy has produced a new cocktail menu, The Centennial Twist showcasing five distinct eras of The Ivy’s history through an exploration of cocktails from the last 100 years. There's also the A Window to The Ivy dessert inspired by the restaurant's iconic windows which will be on the menu until the end of the year.

How to book: online at https://theivy.capricebookings.com/ 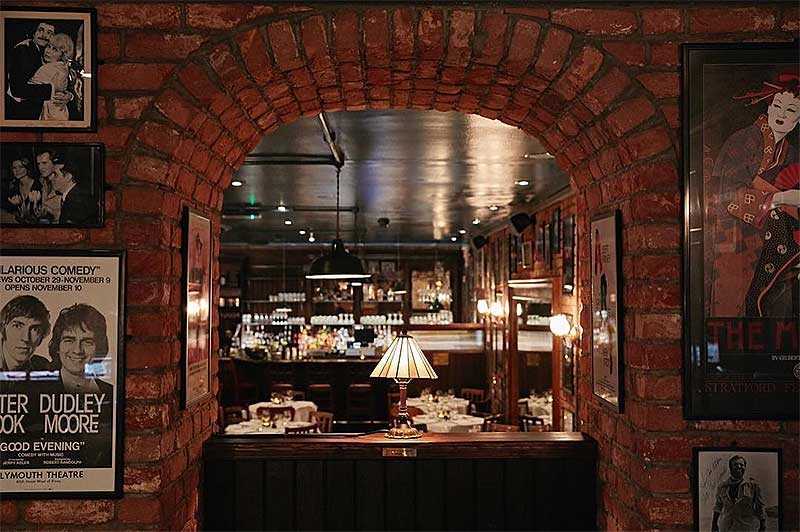 They may well have recently moved, but the new Joe Allens is only around the corner from the original and has an almost identical feel. A sister restaurant to the New York original, this continues to be a hit and still attracts the odd celeb too.

Original dish still on the menu: We're not sure if it was there at the very beginning, and it's definitely NOT on the menu, but the secret burger is their most famous dish. 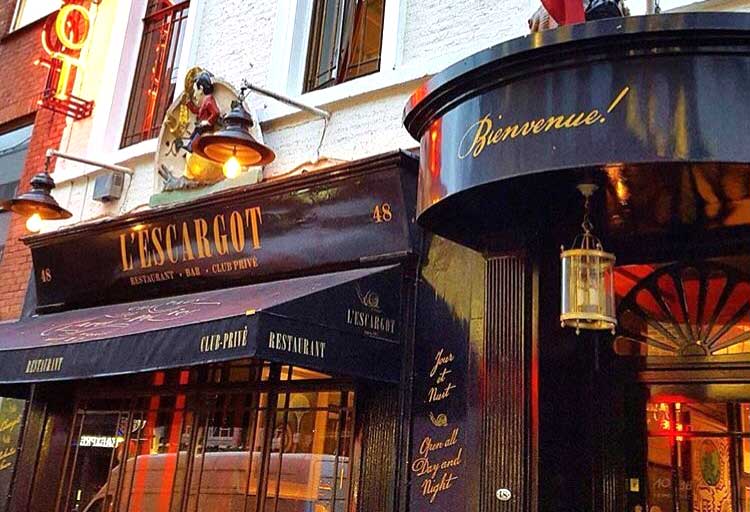 90 years ago Georges Gaudin opened the doors to L’Escargot which is now London's longest standing French restaurant. Back in the day the escargots came directly from a snail farm in the basement of the restaurant.

Original dish still on the menu: The snails (obviously) served up with a garlic and parsley sauce

How to book: online at http://www.lescargot.co.uk/reservations/ 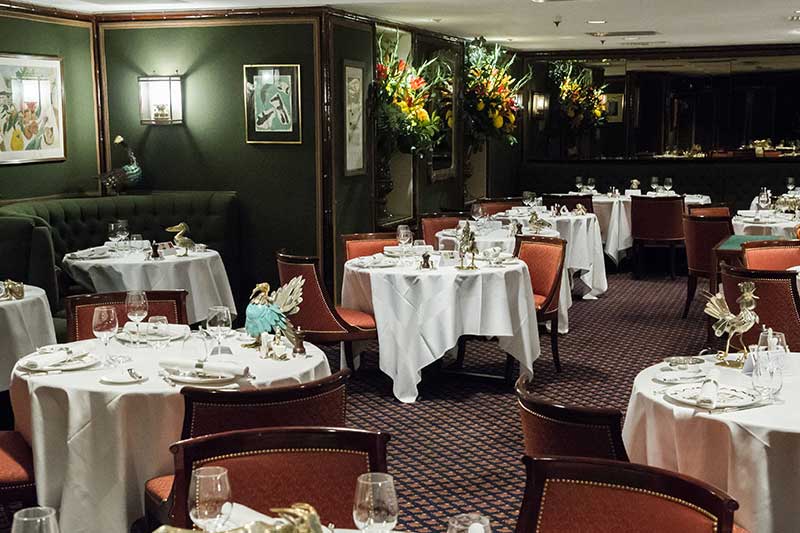 This Roux family restaurant has been around for fifty years, but has only been on its current site since 1981. A year later it made history by being the first British restaurant to be awarded three Michelin stars.

Celebrations planned: They're currently serving a ‘Back to the Classics’ menu – a five-course, seasonally changing menu featuring classic Le Gavroche dishes from 1967 and beyond and is served in the private dining room. It must be booked for 4-6 people and is £90 per person. Go for wine matching including a 1967 wine from the restaurant’s cellar for an additional £90. 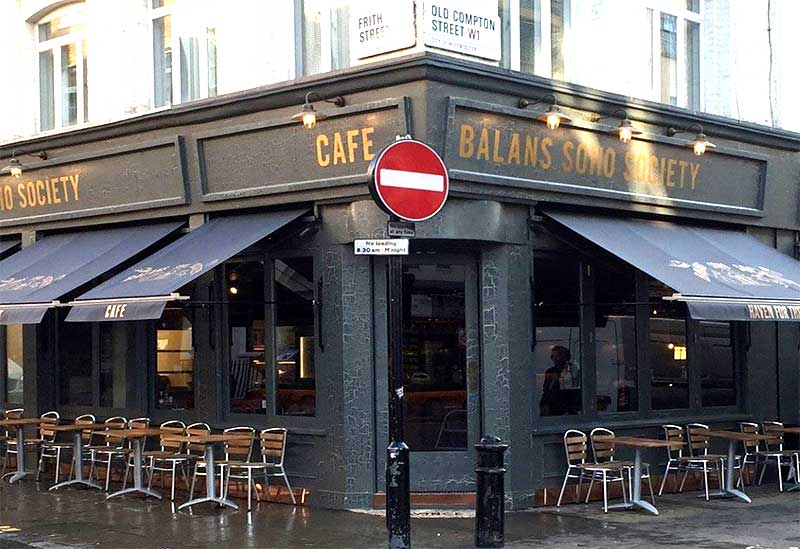 Balans began life as a sandwich shop which evolved by opening later and later to meet the needs of hungry London clubbers. It's now open 24 hours a day and if you're working nearby into the wee small hours it's useful to know they do food delivery up to 4am.

Original dishes still on the menu: there's a section on their menu called ‘Society Classics’ containing both The Infamous Balans Burger and Red Curry, both of which were on the original menu.

How to book: Book online at www.balans.co.uk/restaurant/soho-london/ 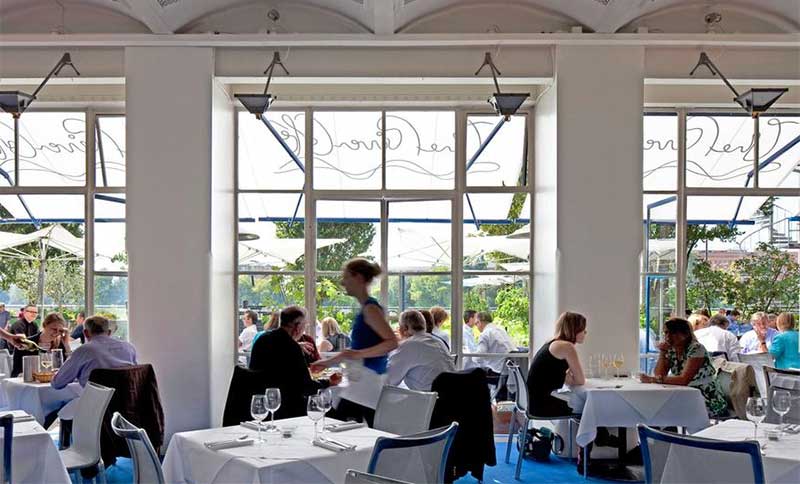 This was once London's poshest works canteen. The River Cafe was set up to feed the staff of co-founder Ruth Rogers' husband Richard Rogers architectural firm in the same building.

Original dishes still on the menu: There are quite a few dishes that have remained on the menu since it first opened but one particularly classic dish is the Calamari ai Ferri - chargrilled squid with fresh red chilli and rocket and, of course, the famous Chocolate Nemesis.

Celebrations planned: There's a new cookbook, River Cafe 30, which will be released on 5 October with 90 classic recipes from our original blue River Cafe Cook Book as well as 30 new recipes from the restaurant today.

How to book: Book online at http://www.rivercafe.co.uk/ 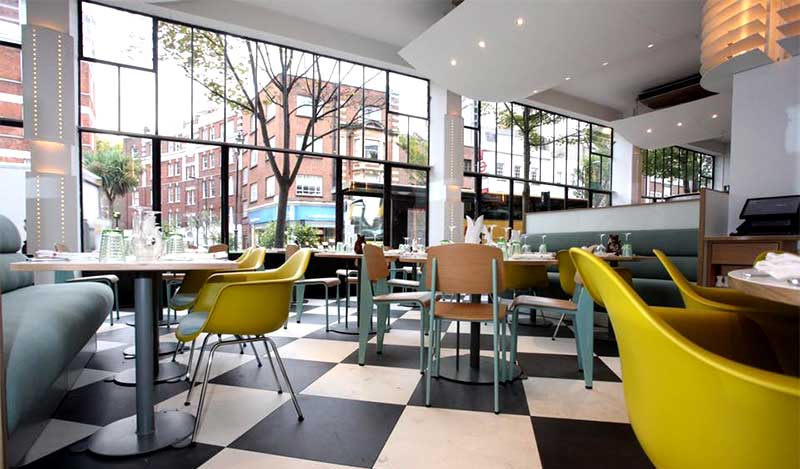 A sensation when it opened in the late 80s, Kensington Place was where Rowley Leigh introduced Londoners to the joys of modern British cooking. The design was a revelation too - heralding a new age of bustling brasseries where the fun was about being seen to dine there.

How to book: book online at http://www.kensingtonplace-restaurant.co.uk/book-a-table/ 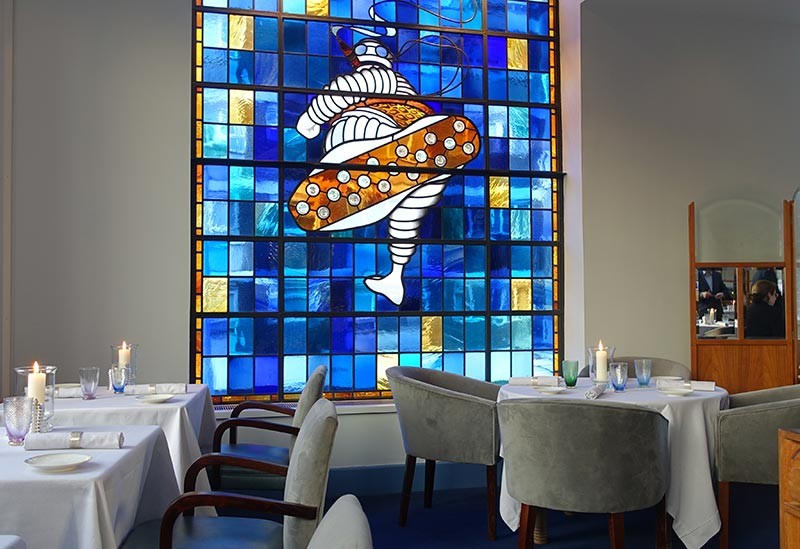 The dream team of Terence Conran, publisher Paul Hamlyn and chef Simon Hopkinson were responsible for the immediate success of Bibendum. The building (and dining room) looked extraordinary, which didn't hurt, but the restaurant also saw a crazy amount of British cooking talent - Phil Howard, Henry Harris and Jeremy Lee to name just a few - pass through its kitchen.

Original dishes still on the menu: none - the menu's been given quite the overhaul with the arrival of Claude Bosi in the kitchen. 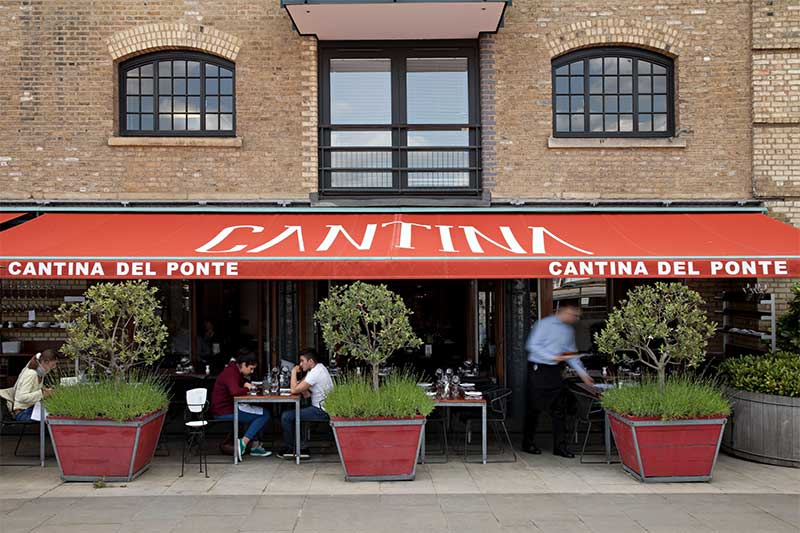 The cantina was part of Terence Conran's grand plan for Butler's Wharf which also included the larger Le Pont de la Tour plus bakery, fishmonger and wine shop. It was a groundbreaking development for London.

Celebrations planned: They've launched a series of 12 new dishes inspired by the original 1992 menu, with prices to match. There's also a set menu or two or three courses with a glass of bubbly for £15 or £20. 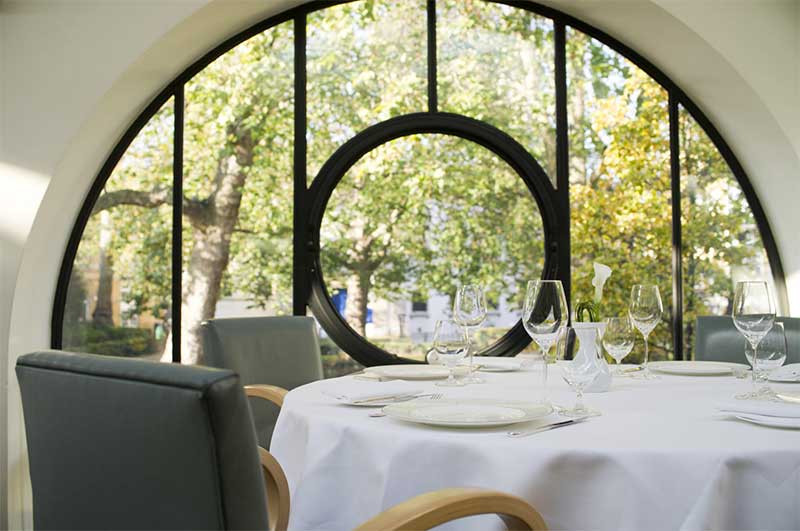 Set in a converted stable block, Orrery's terrace must have one of the nicest views in this area, looking out over the St Marylebone Church gardens. Whatever you do, don't leave without giving the restaurant's award-winning cheese trolley a good going over.

Celebrations: Book the 20th anniversary menu - a five course meal for £60 which includes a glass of Lauren Perrier and dishes such as confit potato with fromage blanc and Oscietra caviar. Runs from 1-31 October. 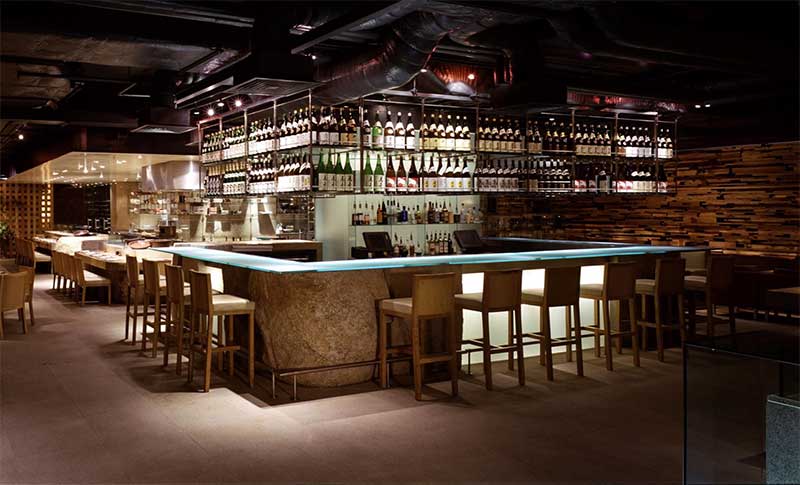 There are now 10 other Zumas dotted all over the world, but this is the original. Opened by chef Rainer Becker together with Arjun Waney and Divia Lavani, the concept of a modern Japanese izakaya restaurant with beautiful design made it an instant celebrity magnet

Original dishes still on the menu: most of them have been on since opening day

Celebrations planned: They're putting on a special 15th-anniversary tasting menu which will run for the month of October. It'll feature 11 tasting dishes spread out over 5 courses chosen by Becker for £124 per person with a wine and sake pairing for an additional £62. 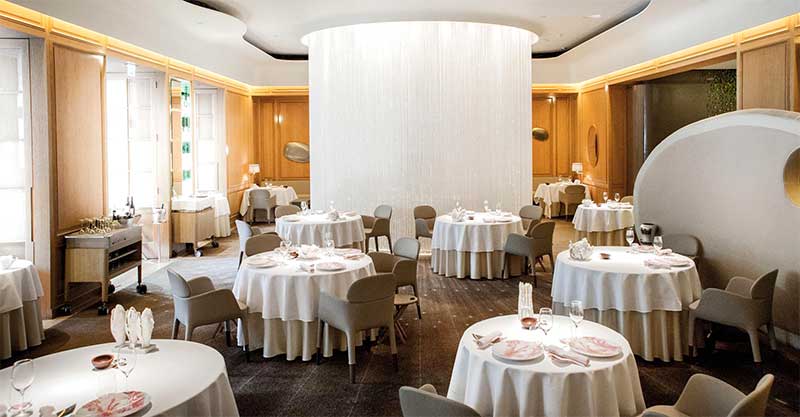 Alain Ducasse at The Dorchester

It's amazing to think that in 2017 there are still only four restaurants in the whole of the UK that possess three Michelin stars, but this outpost of Ducasse's empire had the full complement within three years of opening.

Original dishes still on the menu: There are quite a few dishes that have stayed on the menu throughout this three Michelin-starred restaurant's history - including, the Rum Baba, "Sauté Gourmand" of Lobster, Contemporary Vacherin and their Cook Pot of seasonal vegetables and fruit.

Celebrations planned: There's a 10th-anniversary menu running from 25 October until 23 December for £280 kicking off with an exclusive evening with Ducasse himself on 24 October for £430 which for that night only includes a Dom Pérignon Champagne pairing. 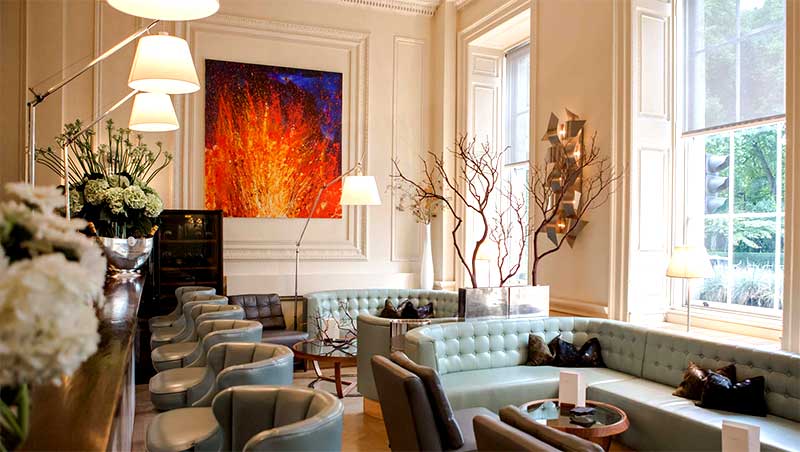 The chef here, Aggi Sverrisson, was previously head chef at Raymond Blanc's Le Manoir aux Quat' Saisons and launched Texture and also 28:50 with Xavier Rousset, who has since left to set up Blandford Comptoir. The luxe modern settings, separate champagne bar and Icelandic dishes marked it out from other high end Mayfair restaurants.

Celebrations planned: They've been running a series of birthday dinners - the next one is with Arnaud Bignon of two Michelin-starred The Greenhouse and Michelin-awarded Ollie Dabbous on 19 September. Tickets are £225 per person with paired wines.

Missed out on the special anniversaries from last year? Don't worry - you can still find that round-up here.