In a world of uncertainty, one thing's for sure, a great Sunday lunch is unbeatable. Even better are the ones you don't have to cook yourself. We've rounded up the best Sunday roasts in London from Highgate to Peckham - making sure non-meat eaters are covered, and even offering suggestions on  post-lunch walks to work it off afterwards 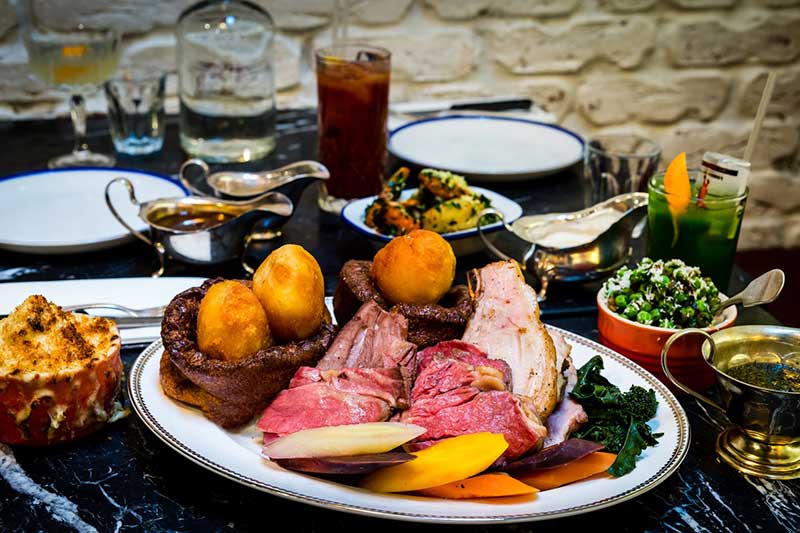 Blacklock’s Sunday lunch is the stuff of London legend and back in 2016, it won the much-coveted OFM Award for best Sunday roast.

What’s the Sunday roast? Choose from 55-Day Aged Beef Rump, Cornish Lamb Leg or Middlewhite Pork Loin or - even better go ‘all in’ and try them all for just £20 a head. it comes with all the trimmings, including Blacklock’s infamous bone marrow gravy.

What about non-meat eaters? Honestly, this one really is for the carnivores... 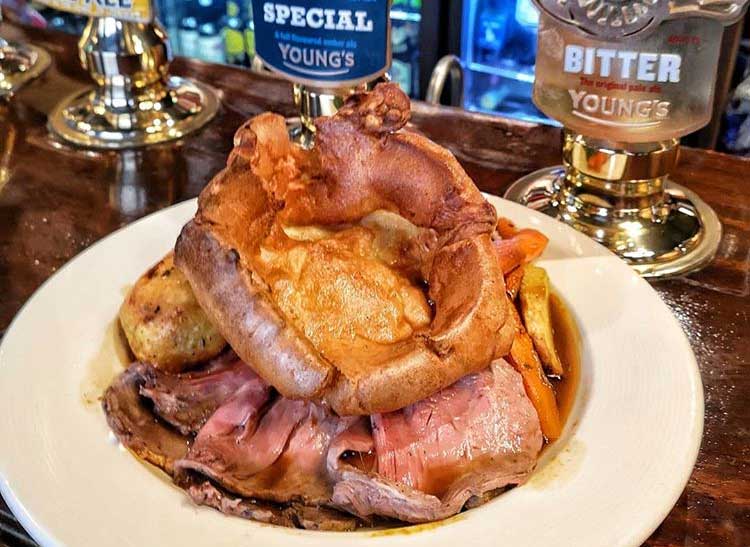 This historic Mayfair pub prides itself on the meat it serves up - dry-aged, grass-fed English and Scotch beef - and Sunday lunch here is no exception.

What’s the Sunday roast? Roast sirloin of Scottish dry-aged beef, pork loin on the bone and a 6 bone rack of lamb plus beef dripping roast potatoes, honey glazed carrots and parsnips, curly kale, baby onions with bacon, (optional) and gravy from the pan

What about non-meat eaters? Go big with an order of Blue cheese, truffle and walnut gratin with vegetable gravy and Yorkshire pudding

More about The Guinea 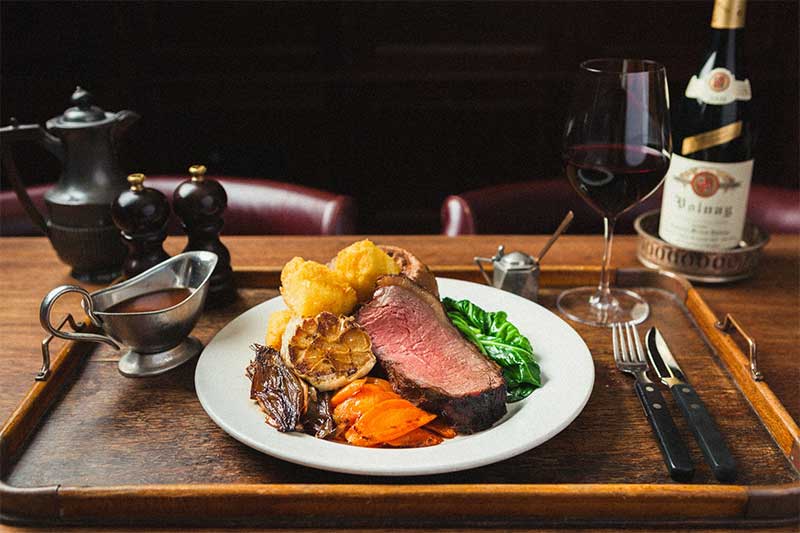 Anywhere as devoted to meat as Hawksmoor is should be able to turn out a solid roast, and so this proves to be - it's definitively one of the best in town.

What’s the Sunday roast? They keep it simple with just one meat - a slow roast rump. And that comes with beef dripping roast potatoes, Yorkshire puddings, carrots, greens, roasted shallots and garlic as well as bone marrow and onion gravy.

What about non-meat eaters? If you’re pescatarian, there are loads to choose from here with fish brought in fresh from Brixham Harbour. For vegetarians - there’s one key main, a roasted celeriac dish with pickled shiitake, lentils and goats curd. 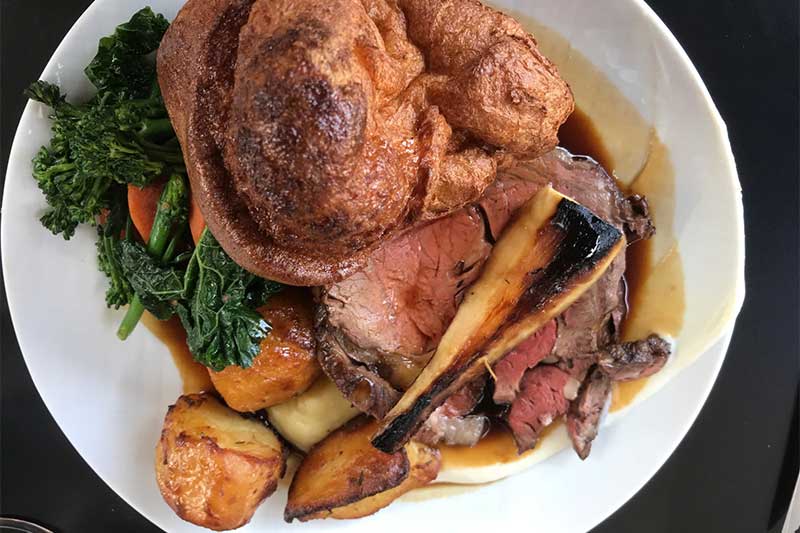 This family-run enterprise has close ties with The Ginger Pig, so you can expect the provenance of the meat to be tip-top. 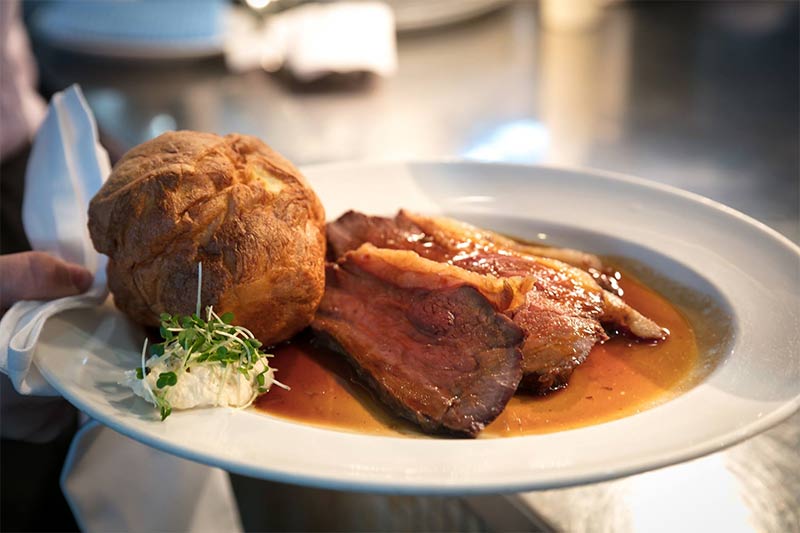 The clue is in the name - this Borough Market stalwart has been looming over the market since 2005. With such a super location, every menu has a roll call telling you the suppliers from the market behind each dish.

What about non-meat eaters? Choose from a fillet of hake, or a vegetarian special which could be something like lemon ricotta, spinach, pea and shallots tortellini with a truffle and Pecorino nut crumble. 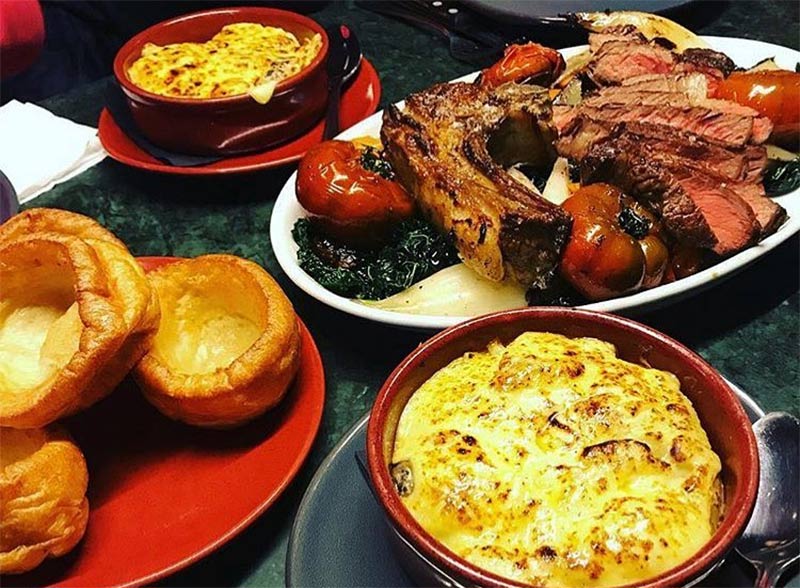 Neil Rankin has three Temper restaurants with a strong focus on smoked meat and we think the original in Soho is the best for a Sunday lunch, although the Covent Garden branch has also switched from pizzas to meat and tacos too. So you could always have a taco for starters...

What’s the Sunday roast? So much on offer - from lamb shoulder and suckling pig to loin of Dexter beef. To go with it, you’ll have to fork out for the roast garnish of lamb fat roast potatoes, seasonal greens, roasted carrots and spiced cabbage.

What about non-meat eaters? Choose the mushroom, onion and almond empanada with smoked garlic. 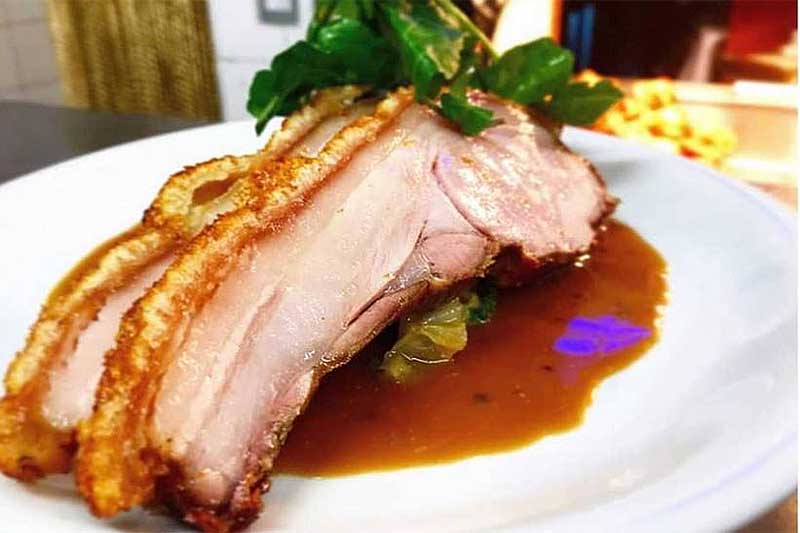 This is the Dalston pub from Tom Oldroyd, who’s also behind the wonderful Oldroyd in Islington. While the burger and the crab and chip butty are a must, Tom and head chef Rory Shannon obviously understand the need to get the Sunday lunch just right...

More about the Duke of Richmond 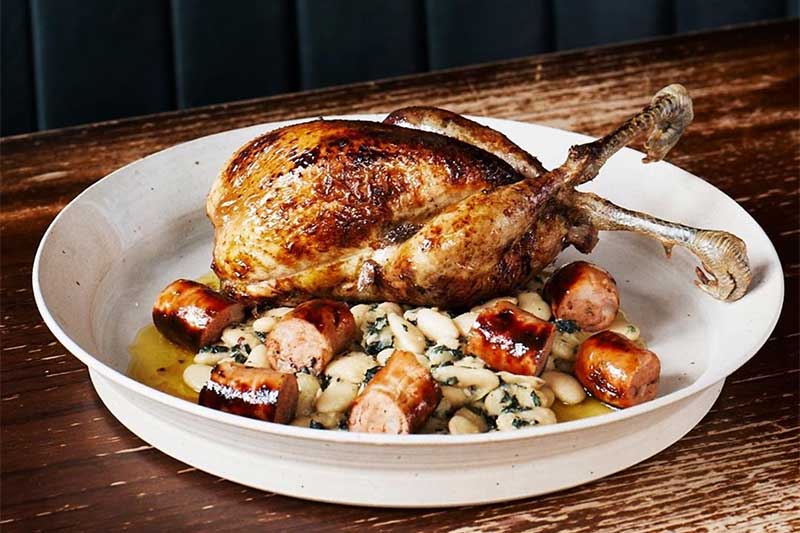 The first Public House in London to be awarded the Michelin Pub of the Year, this popular East London gastropub has recently branched out with a Bun Shop at Market Hall Victoria. But back here in Hackney it’s business as usual, which includes a very good Sunday lunch.

What’s the Sunday roast? Menus change regularly, but a recent one features Hereford T-Bone & Yorkshire Puddings or Whole Roast Chicken with Bobby Beans & Mustard - all made for sharing between two. Sides are all a fiver extra - expect roasties plus dishes like Chard, Bay & Garlic

What about non-meat eaters? It’s pretty heavy on meat and fish, but purely veggie mains like Celeriac Tart & Braised Mushroom are available. 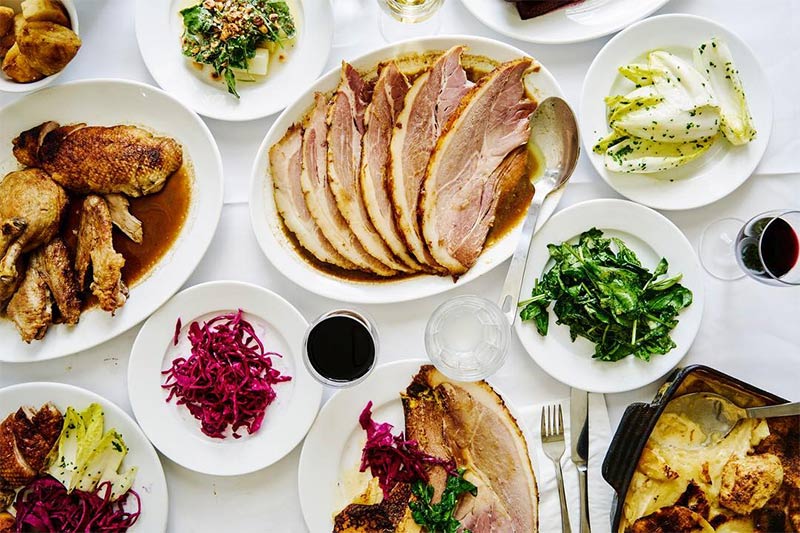 Topping the list of the Guardian’s best Sunday lunches in 2017, this South London pub is owned by the team behind The Canton Arms and the Camberwell Arms. With all the awards, it has a great reputation for the Sunday roast, but it’s worth a trip across town for the regular seasonally changing menu too.

What’s the Sunday roast? Rare roast Dexter beef or - if there’s a gang of you - the seven-hour Salt Marsh lamb shoulder. The rare beef comes with carrots, roasties and watercress or there’s a potato and olive oil gratin with the lamb shoulder.

What about non-meat eaters? There’s plenty of choice on the extensive menu including a recent starter of Griddled Calçot onions and romesco.

More about the Camberwell Arms 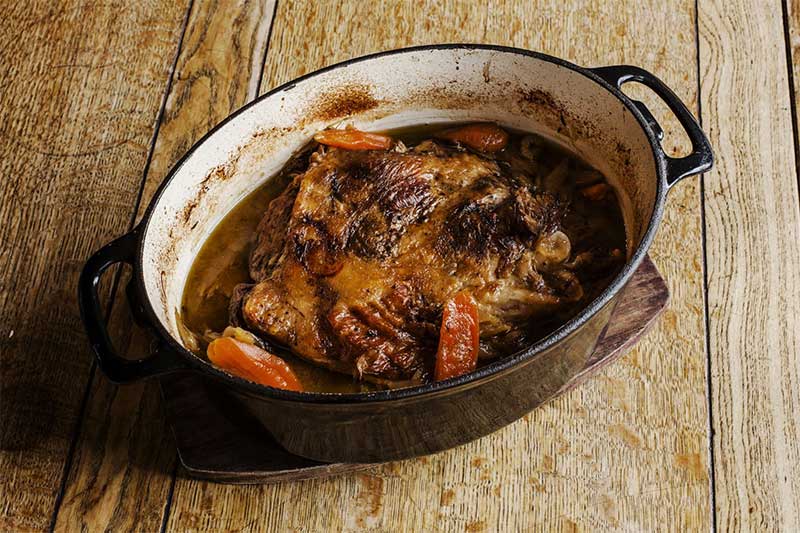 This pub has Trish Hilferty in charge, who was formerly of both the Eagle in Clerkenwell and the Anchor & Hope in Waterloo and is referred to as “gastropub royalty” - so it’s definitely a pub to make a trek to. It’s also well known for its foie gras - so if the foie gras toastie is on the menu, keep that in mind too.

What’s the Sunday roast? Rare roast Dexter beef - and at the time of writing - grouse too. And there’s a huge seven-hour Salt Marsh lamb shoulder for up to five people sharing. It comes with garlicky beans, roasties and watercress

What about non-meat eaters? Chose from the main menu - example dishes are ”Ratatouille, fresh cheese and a croute”

More about the Canton Arms 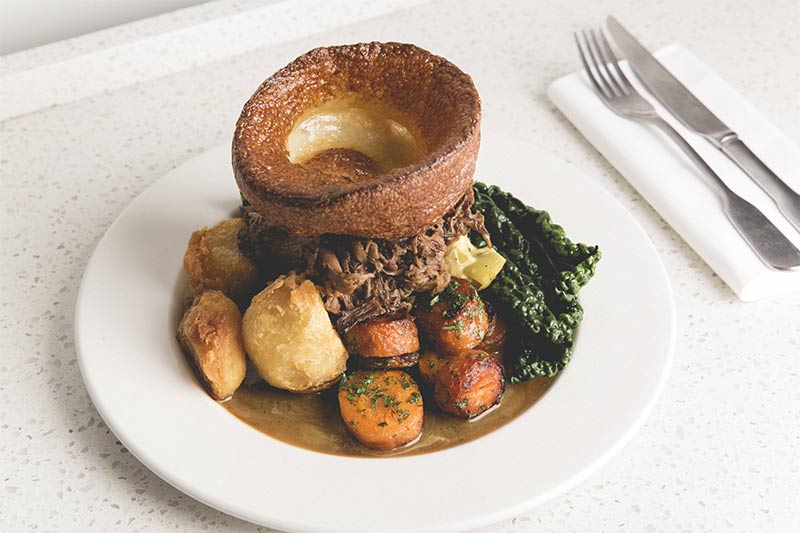 With an on-site butchery, you’d expect any meal with meat as the star of the show to be good here, and you wouldn’t be wrong.

What about non-meat eaters?  Vegetarians aren't an afterthought here with a lovely coal-roasted cauliflower served up with vegetable gravy the thing to go for. 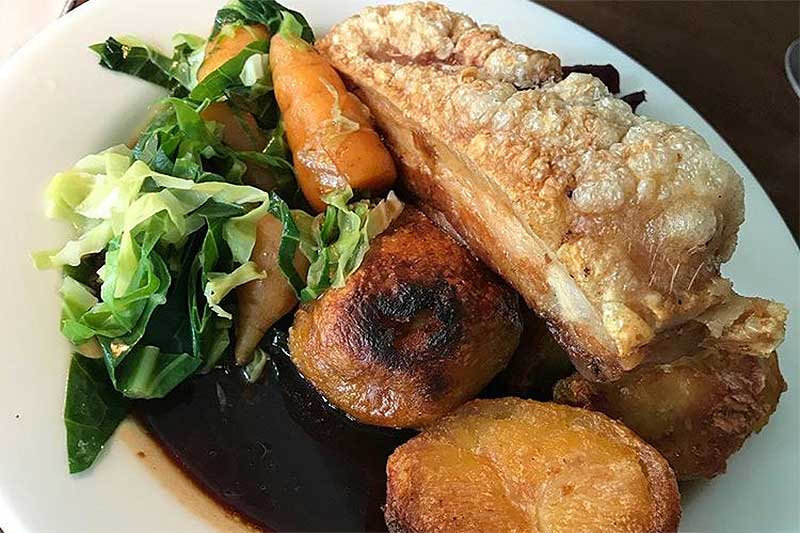 Picked by the Guardian as serving one of the best Sunday lunches in the country, this neighbourhood Islington pub is one of a few gastropubs worth crossing town for.

What’s the Sunday roast? A recent menu had three sharing roasts on the menu, aimed at between two and three people -  whole roast chicken, slow-cooked shoulder of lamb and roast forerib of beef. All come with roast potatoes, carrots and greens and there are Yorkshire puddings with the beef.

What about non-meat eaters? Pescatarians probably do better here, but there should be a vegan main option on the menu too, like a grilled January cabbage with leeks, white beans and romanesco. 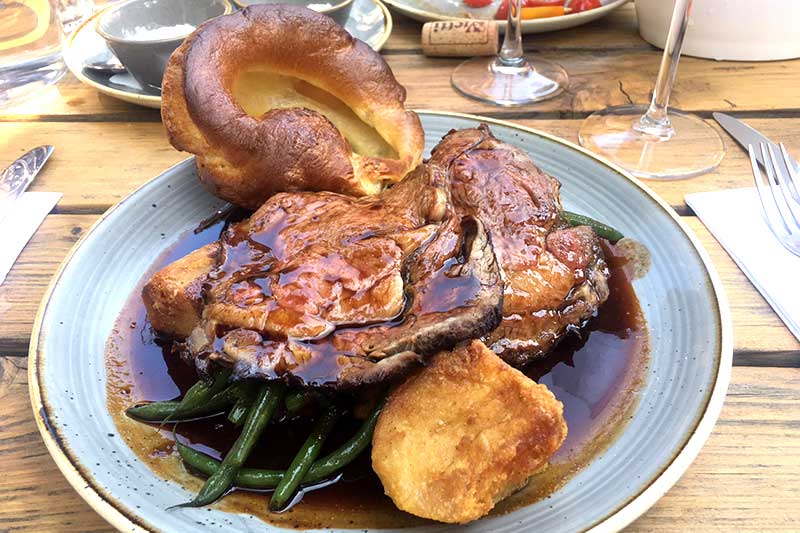 We visited this Highgate pub for a Test Drive and it’s a perfect place to go if the weather’s behaving with a lovely back garden (but plenty of space inside too). Expect meat from the nearby Highgate Butchers and a seasonal, locally sourced menu outside of the roasts.

What’s the Sunday roast? It can vary depending on the supply, but on our last visit, it was a confit of Cornish lamb shoulder, roast Aberdeen Angus rib eye or a slow roast belly of middle white pork. It comes with roast potatoes, green beans, carrot turnip, swede mash, Yorkshire and LOTS of gravy.

What about non-meat eaters? Vegetarian nut roast (served without the Yorkshire)

More about The Red Lion and Sun 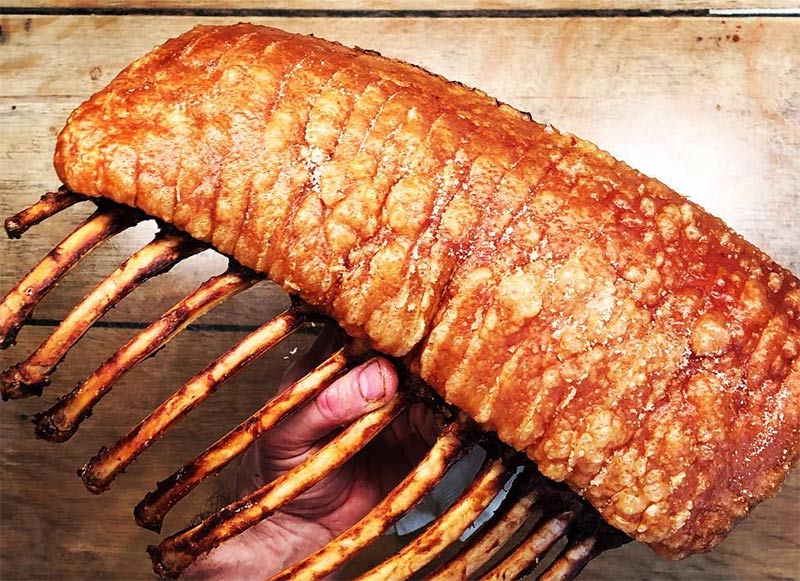 Run by Jesse Dunford Wood, Parlour in Kensal Rise has a pretty epic Sunday Roast menu. But it’s just as worth visiting for a couple of his specials - the Chicken Kyiv and 'Desperate Dan's' Famous Cow Pie.

What’s the Sunday roast? QUITE the choice. So there’s Sirloin of Shorthorn Beef, Mary's Lop Eared Pork, or Goosnargh Chicken Breast. Or if the choice is just too much, go for “a bit of everything”. And there are big platters for larger groups. Thre are also all the usual trimmings and ‘lashings’ of gravy

What about non-meat eaters? A recent main was a Hazelnut Roast served u with Girolles & Sweetcorn 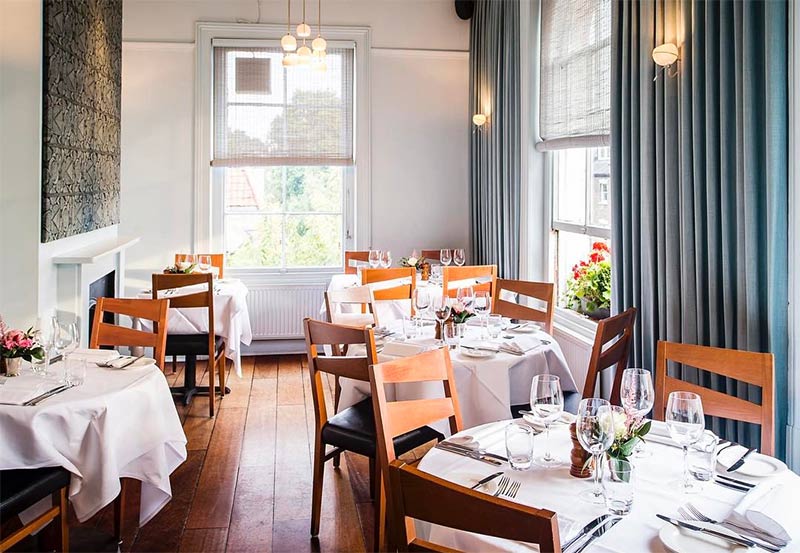 One of the best pubs in the Hampstead area, a local favourite and definitely THE place to go for a Sunday lunch there.

What about non-meat eaters? Pick from the a-la-carte menu which runs alongside this. A recent example of a veggie main was goat’s cheese grilled red peppers stuffed with mushroom risotto on tomato sauce and spinach.

More about The Wells 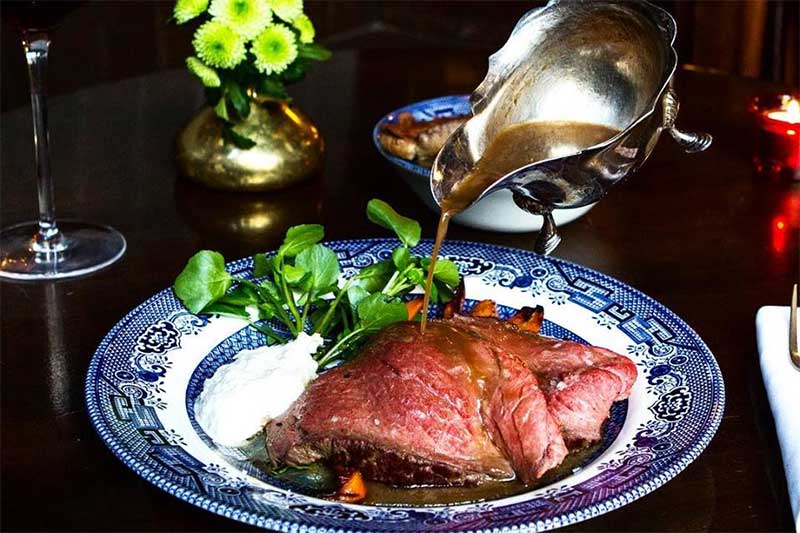 This local favourite, recently given a sensitive makeover now has ex-Oldroyd chef Louis Linwood in the kitchen where his Sunday roast is already winning plaudits.

What about non-meat eaters? Head for the a la carte where dishes might include girolle tagliatelle.

More about The Cleveland Arms 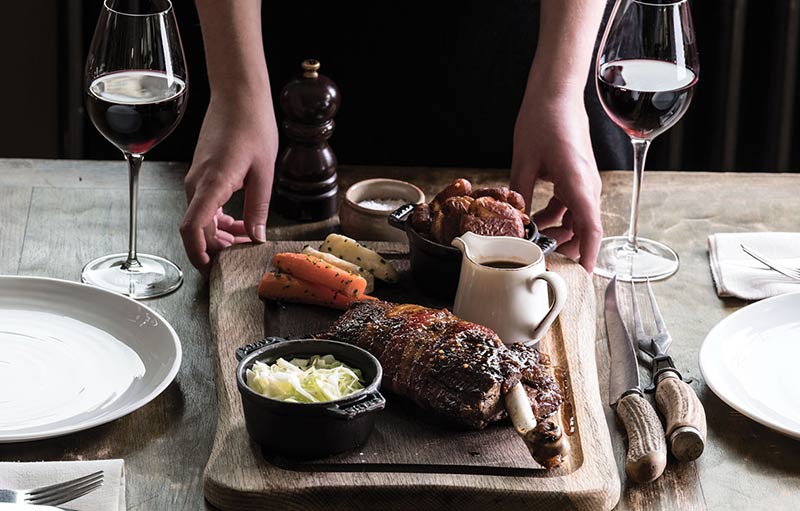 It’s still the only Michelin-starred pub in London, which should give you an idea of the quality and it also comes from Brett Graham (with ex Ledbury chef Sally Abé in charge as Head Chef). Theit venison scotch egg is a must before hitting the roasts.

What’s the Sunday roast? Roast Sirloin of 45-day aged Hereford beef. On the side are Yorkshire puddings, cauliflower cheese croquettes (which on their own would make us want to come here), horseradish cream, roast potatoes, root vegetables, bone marrow gravy and greens.

What about non-meat eaters? They have a separate vegetarian menu on request.

Anywhere with Henry Harris (formerly of Racine) in charge of the menu is going to be great and since opening in the summer of 2018 this has been hugely popular with well-heeled locals.

What about non-meat eaters? There’s loads of choice in the starters and a main of roast squash with Brussels tops and goat’s curd on toast on a recent menu sounded good.

More about Hero of Maida