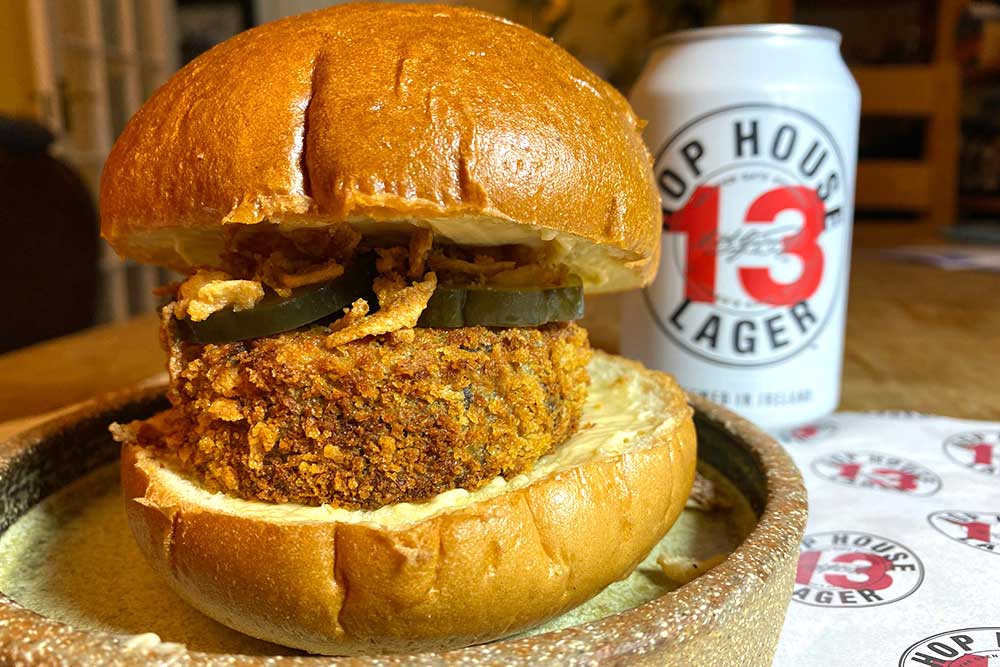 The Dublin born and brewed kit from Hop House 13

This year, St Patrick's Day, Wednesday 17 March, is very much an at-home affair. But you can still get some excellent St Patrick's-inspired and Irish meals delivered to you (and some Guinness and whiskey, of course). We round up some of the best. Plus - check out our 2021 Murphia List, celebrating the Irish talent working in London's food & drink scene.

The Dublin Born and Brewed box (Nationwide delivery - £65) is a team-up between Hop House 13 and three London Irish chefs. There are scampi and chips from Anna Haugh, a Black Pudding burger from Patrick Powell and a crispy fried crubeen bun from Nick Fitzgerald of Tacos Padre (plus the beer, of course).

Ginsters have teamed up with Guinness for a brand new Ginsters Smoky Steak & Guinness slice. It's stuffed with beef, potato, carrot, onion, swede, leek, chestnut mushrooms, black treacle, garlic and a measure of the famous stout in a rich gravy that's infused with smoked salt. Goes on sale from 15 March.

Rogues (London delivery - £30 for one) - the special menu from Rogues London features Soda bread with caramelised onion & Guinness butter, Steak & ale pie, colcannon & grilled cabbage and Apple cake with Bailey's custard - and a can of Guinness too.

Bleecker (Nationwide delivery - £20) have brought back the Bleecker Black in a team-up with Clonakilty Pudding. The special burger is in big demand so keep an eye out as more stocks come in.

Crosstown (Nationwide delivery - £22) - Their Guinness and Bailey's doughnut has returned and you can also get it in a gift set which includes cans of Guinness and a Bailey's chocolate bar.