Written by Nancy Smallwood
Created: 01 May 2017

Well of COURSE there's avo on toast. But we've also got Spanish brunches, Peruvian brunches, pasta brunches - you name it.

The one with beer 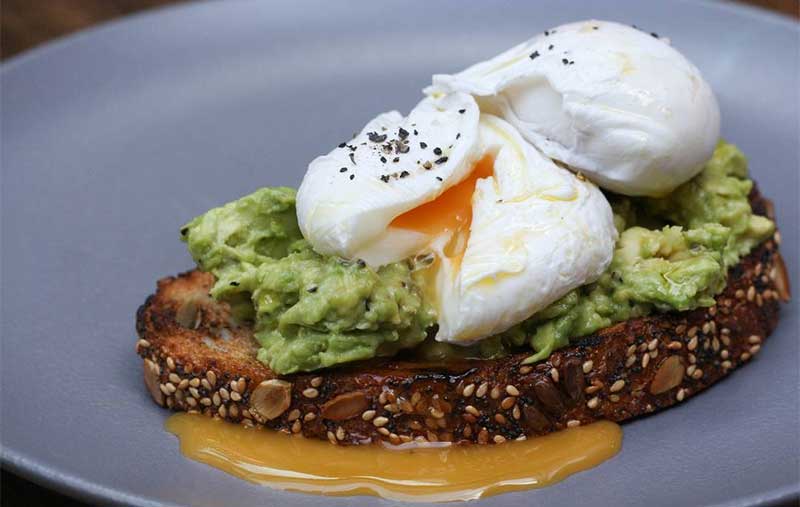 Any brunchistas worth their salt will have their ears cocked for the most favourable mentions of the B-word - Bottomless. Galvin HOP is definitely among the more affordable, with unlimited Bloody Marys, prosecco or Pilsners up for grabs for a mere £10 per person. Great for those who’re planning on starting their day as they mean to continue. Oh, and there’s buttermilk pancakes and burgers too. 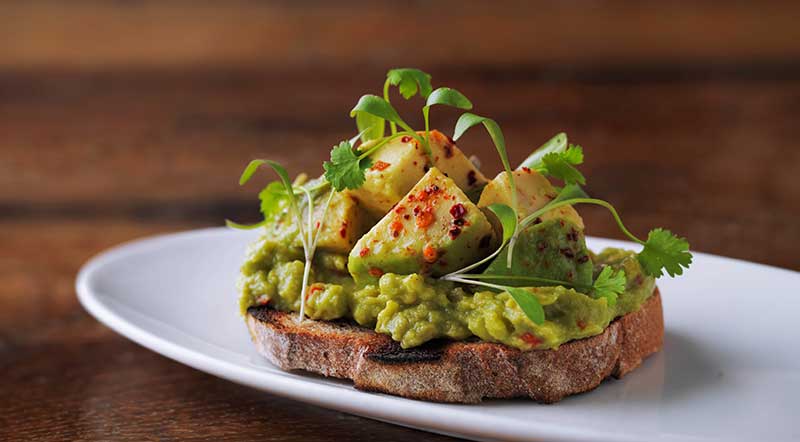 If you're after brunch, but aren't suffering too much from the night before, try Gaucho's Electro Brunch featuring bottomless drinks, unlimited small plates and a DJ. Eat and drink what you like within two hours for £49.95. We like the sound of the Homemade Peanut Butter Dulce de Leche on French toast and the fried Provoleta cheese with a caramelised onion chutney and if you want to stay vaguely healthy there's also a blend your own juice station.

More about the Gaucho brunch 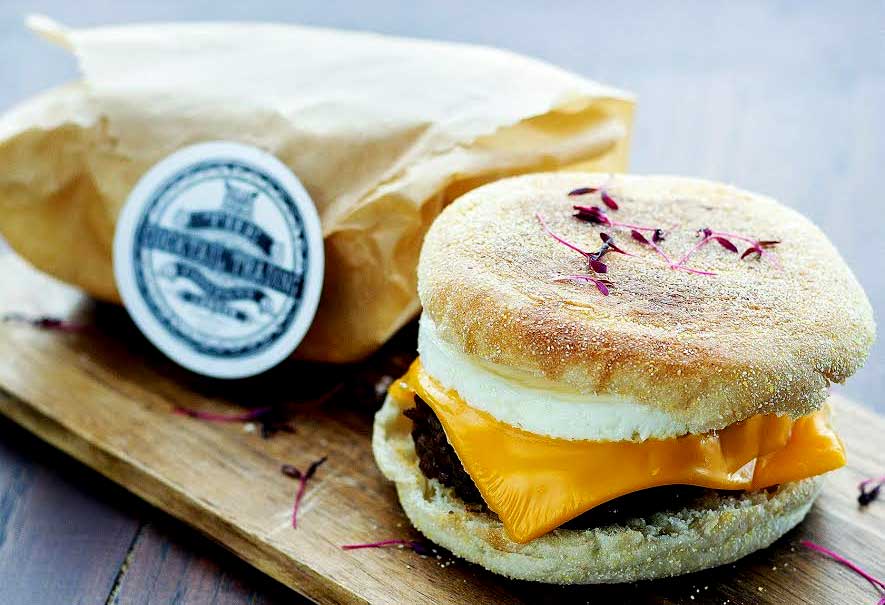 CTC now run a monthly brunch club putting on breakfast MacMuffins and hash browns and a special menu of ‘Morning Glories’ cocktails. For £14 you can get a MacMuffin with a cocktail. There's music from a live swing music trio. Keep an eye on their Twitter feed for news of their next brunch.

The one with pasta 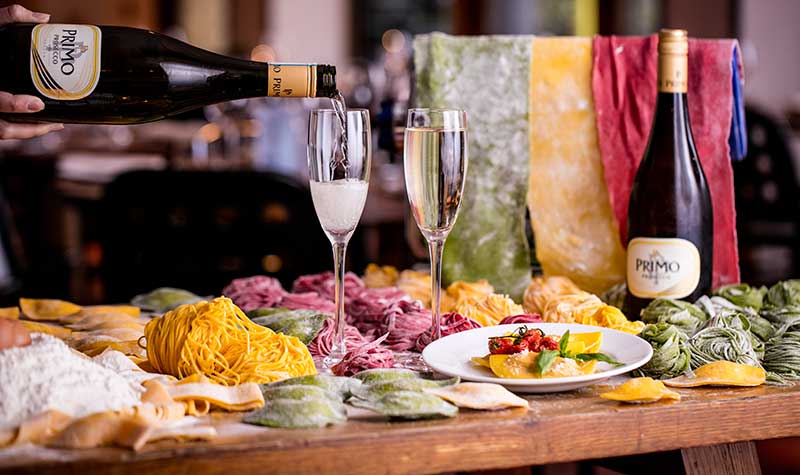 This SE1 Trattoria will be running their own bottomless brunch, which will be heavy on the prosecco and pasta. Between 12-3pm on Sundays, you can get three dishes for £15 (or five for £25), including lots of small pasta plates. There'll also be poached egg with spinach, or smoked swordfish with rocket and fennel - with an optional £15 add on for bottomless prosecco.

The Middle Eastern one 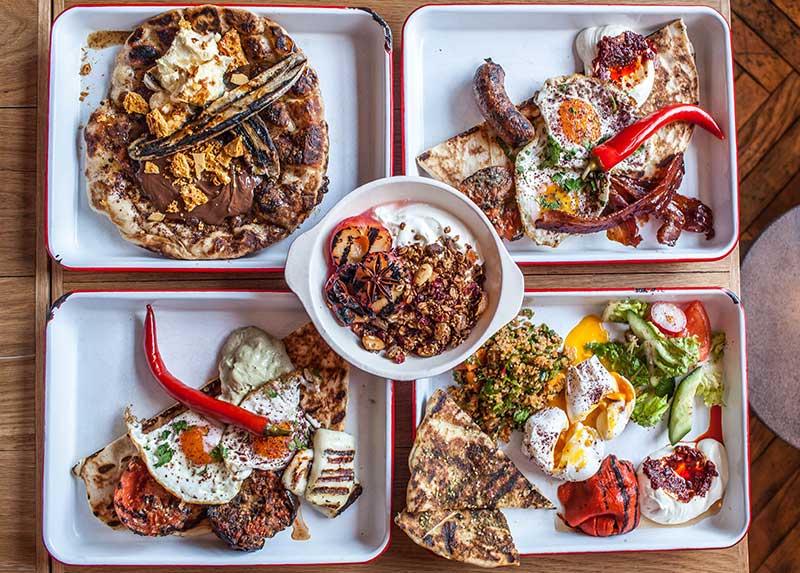 With all that spicy paprika, creamy feta and hot flatbreads, it’s no surprise that the joys of Middle Eastern brunch are rightfully revered throughout the capital. South London types after a punchy brunch can now head to Bababoom in Battersea, where they can try date-glazed bacon, harissa labneh or sumac fried eggs, and even Persian-style eggy bread with Nutella. 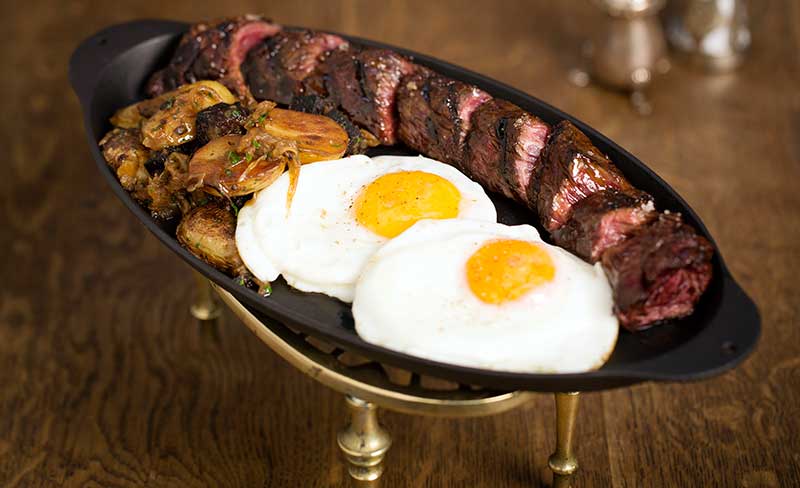 Jason Atherton’s Temple and Sons has recently opened for brunch service, and their menu is rife with traditional brunch plates given a suitably upmarket twist - sausages are pork and fennel, sourdough is topped with bone marrow, while eggs are Lyonnaise-style. We’re definitely most interested in the Bloody Mary though - Ketel One vodka infused with bacon and tomato juice, social spice mix and something called a “Full English” garnish...

More about Temple and Sons 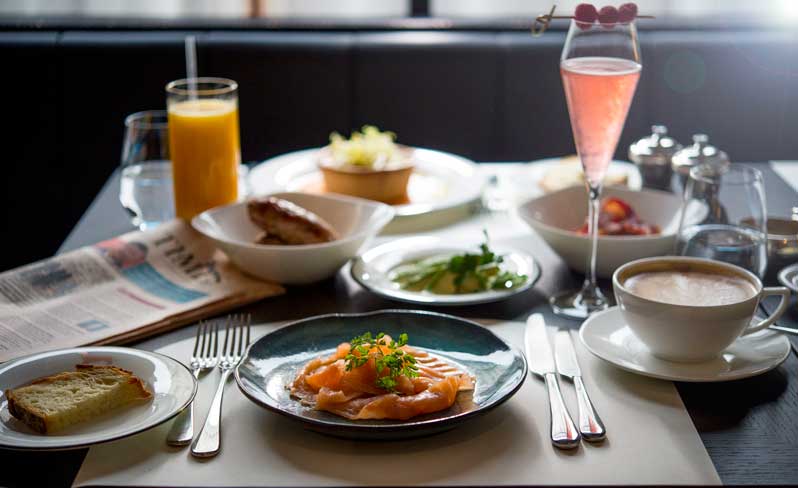 Covent Garden-based Margot is offering an Italian/English brunch crossover menu, though it does start a little late, running from 12-4pm (which is a huge plus for late risers.) There’ll be poached eggs with avocado bruschetta and pancetta, crepelle al limone pancakes with wild berries and marscapone, and fried eggs with salami and burrata. A potentially excellent way to bolster yourself as you tackle thechaotic streets and shops of the West End.

When: Every Saturday and Sunday from 12 to 4pm 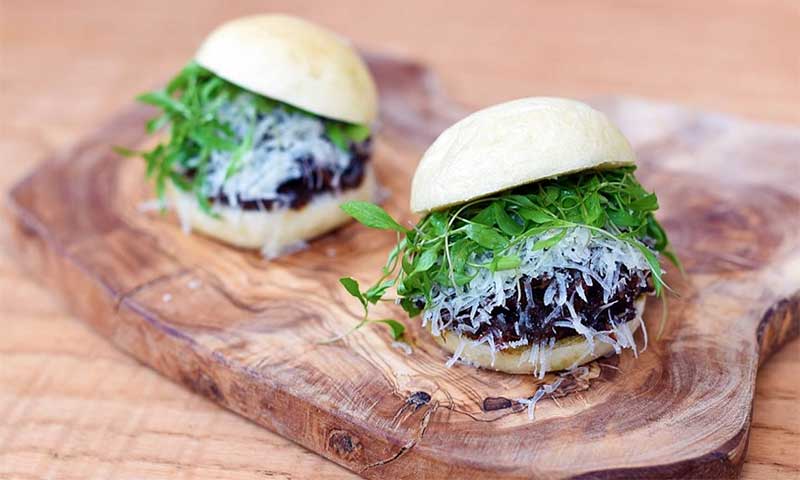 Basque-style brunch is the order of the day at Eneko, with various menus to choose from: street food, classic and grill. It's a good place to mix and match - which is good for large groups with heads too fuzzy to make their minds up. There’ll be mini-Basque pizzas with Idiazabal cheese, spiced Basque sausage cooked in cider, and brioche stuffed with suckling pig. And rather nicely, it includes a complimentary glass of cava or fruit juice with your breakfast. Opt for a five course tasting menu and the whole thing costs £50.

Where: One Aldwych, London WC2B 4BZ

The handy for the station brunch 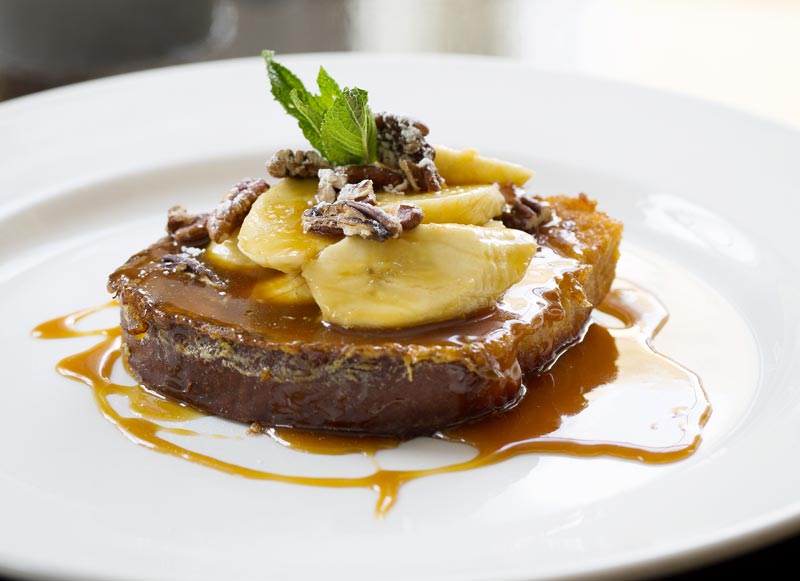 If you’re after a breakfast with touch more class, £65 at Plum and Spilt Milk will net a pair of you a bottle of Champagne and a selection of suitably swanky dishes to nibble on from the eggs and brunch section of their menu, like creamed haddock and prawn thermidor with poached eggs . Plus, there’ll be coffee to finish (though we won’t judge if you need it to start as well).

When: Saturday and Sundays from 11am to 4pm

More about Plum and Spilt Milk 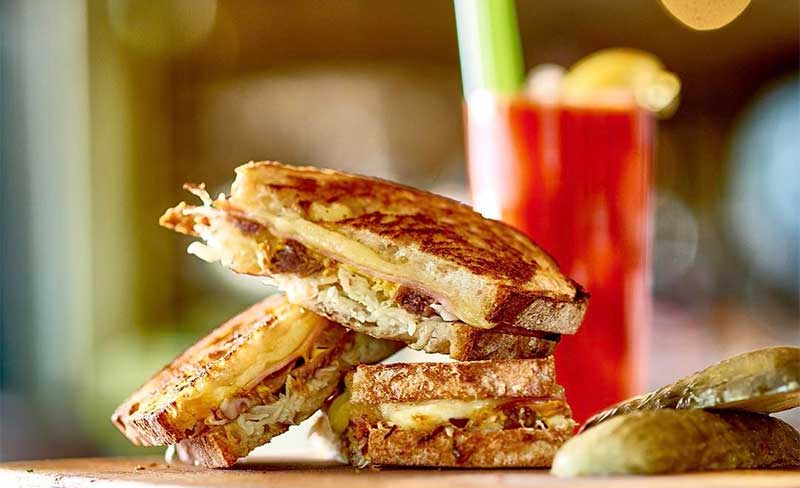 Mondrian London’s sea container location and all its glam transatlantic-1920’s overtones makes it ripe for a bit of Americana, now available on its brunch menu. There’s a classic salt-beef Reuben, a crab omelette with avocado and tomatoes, and the Brooklyn Sandwich, which is less of a sandwich, and more of a hyper-USA triumph of buttermilk waffles, bacon, syrup and ice-cream. Bottomless prosecco available on request, or opt for a bespoke Bloody Mary from the cart. 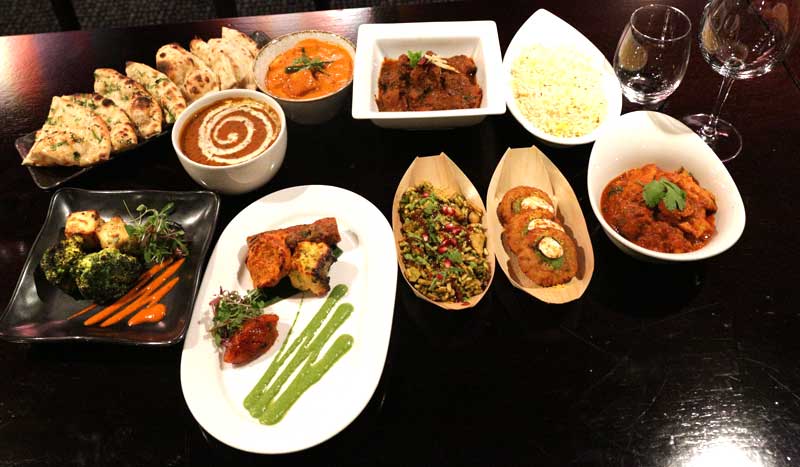 If you’ve ever woken up with the unshakeable craving for rogan josh, but found Indian brunch a touch scarce on the ground, your time has come. Mint Leaf will shortly be kicking off a very serious brunch offer in the West End - though it does push the boundaries of what could be considered brunch, as it consists a whopping *five* courses for £40.

That will include tandoor-glazed paneer tikka, lamb seekh kebab with coriander and murgh banjara chicken thighs, with a dessert platter to round it off. For an extra £15, you’ll have the option to extend the deal to include bottomless alcohol too. 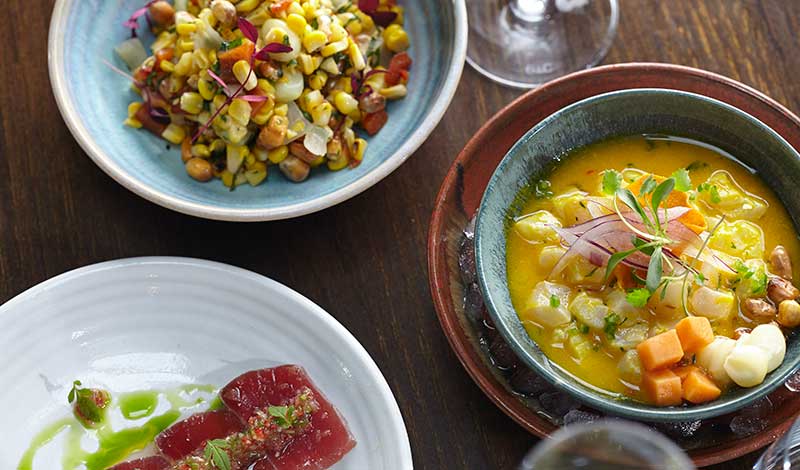 In Mayfair, COYA's just launched a new Latin-American weekend bottomless brunch menu. There's dishes like Corvina ceviche with truffle and Chilean sea bass casuela and to drink, if you're after something other than the usual fizz, how about a Pisco Sour or their Pisco Mary. On Saturdays they have a DJ and on Sundays, children's entertainment.
More about COYA Mayfair's weekend brunch 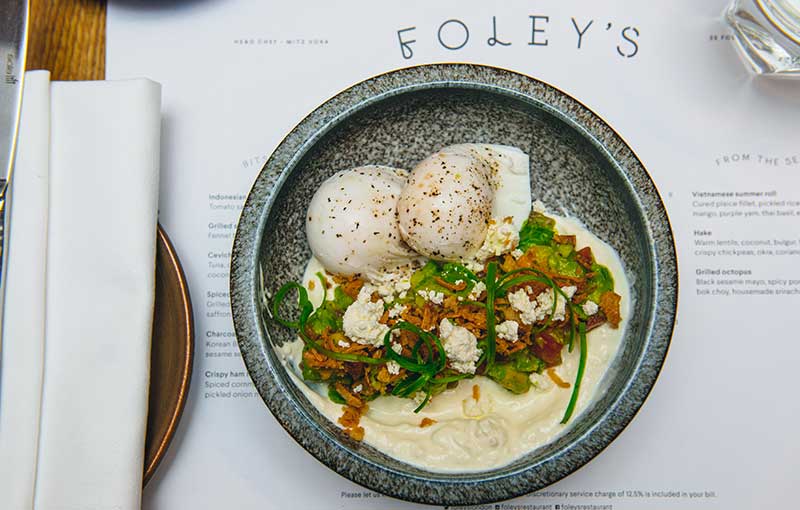 Foley's launched their brunch offering this month - with all manner of the Middle East and Asian inspired dishes. The two main sections focus on Paratha Rolls - choose from merguez and bacon or avo fillings for example - and Egg Bowls with sourdough or focaccia and fennel butter. There's bottomless Filter Coffee and a whole load of cold press juices. 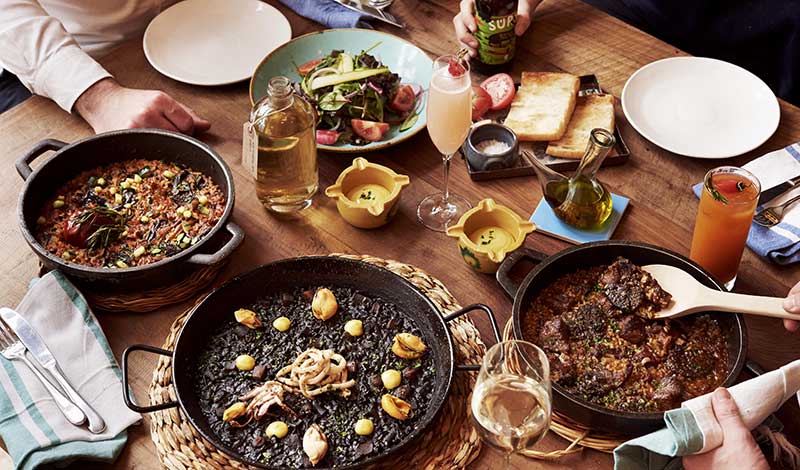 Launching on 1 May Brindisa Shoreditch have a new weekend brunch menu of five rice dishes including Arroz de Costillas with Pork Ribs and ‘morcilla’ Black Pudding; Caldoso de Bogavante, a broth based dish with lobster, Paella Marinera with Prawns, Cuttlefish and Mussels. Obviously, there's a Bloody Mary on offer, but also cocktails like the as the Paloma Primavera, with 8 Blanco Tequila, Blood Orange and Thyme Agave.

Where: 152 Curtain Rd, London EC2A 3ATSaturday and Sunday from