Continuing our series of features on the best neighbourhood spots in London (see Part 1: East London), we leave the bustling East behind us, cross the Thames and head South.

More spread out than other parts of London, the South has traditionally suffered a dearth of inspiring local eateries with quality establishments few and far between. Happily for its residents, this is no longer the case thanks to a plethora of exciting new ventures which have opened their doors over the last few years. And you only need to look at the flurry of openings centred around Bermondsey, Brixton and Clapham to see that South Londoners are now increasingly spoilt for choice. 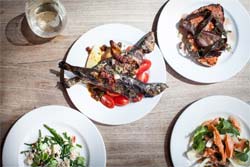 Where is it? Southwark Street, Southwark, situated in the Allies & Morrison building, just minutes from London's Southbank.

What should we have? The new menu is divided into a series of small and large plates allowing diners to enjoy a snack and a glass of wine or indulge in a three course experience. Our picks are N'duja toast & grilled squid, Mozzarella, broad beans and chilli and the Grilled Cornish mackerel. Make sure to explore the wine list all of which are available by the glass starting at just £2.90.

Worth the journey? Cinzia's commitment to freshness and quality means that all breads and pastries made from scratch, a feat which sees long queues snaking out the door every weekend. The Table is open all day 7 days a week and also serves brunch from Thursday - Saturday. Group bookings are welcomed.

More about The Table 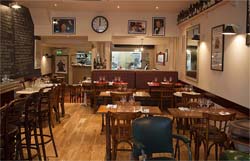 Following the success of Terroirs and Brawn, Ed Wilson and Oli Barker opened Soif in Clapham late last year. Continuing the trend set by their first two establishments, Soif pairs simple, provincial British and French dishes with an extensive and affordable wine list which focuses on natural and bio-dynamic wines.

Where is it? Battersea Rise, just a few minutes walk from Clapham Junction station.

What should we have? The menu changes with the seasons. However, since the cuisine tends to the more 'rustic' end of the spectrum, expect to eat a lot of bread, butter and pork. The Pig Cheeks, Pork Rilletes and Crispy Squid is in every way just as enjoyable as the Heirloom Tomatoes, Gem Salad and Violet Artichokes.

Worth the journey? The staff at Soif really make the journey worthwhile. Knowledgeable, friendly and unpretentious they're more than happy to take the time to help explain the food and find the perfect wine to match. 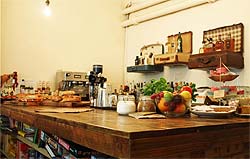 Brixton market is now a place where diners could be overwhelmed by the array of choices available. Seven @ Brixton stands out serving competitively priced Pintxos, Tapas and Cocktails.

Where is it? Seven can be found in the continuation of Brixton Market on Market Row, a few doors down from Franco Manca pizza.

What should we have? The Pintxos display is a good place to start, while the Spanish Tortilla and Jamon Serrano is as authentic as you'll get in a decent Spanish restaurant. The cocktail menu is a combination of classics with a few twists and experimental drinks.

Worth the journey? With outdoor tables, great value cocktails, a constantly changing menu and the rest of Brixton market just around the corner, the only question you should ask yourself is 'When?’. 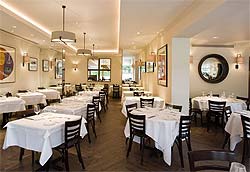 Chez Bruce is often referred to as 'a small restaurant with a big reputation'. Opened in 1995 by Bruce Poole and Nigel Platts-Martin, it has worked its way into the hearts of Londoners whom year after year rate it amongst the city's top neighbourhood restaurants.

Where is it? Although some customers may bemoan it, part of the charm of Chez Bruce is its location – perched on Wandsworth Common just a few minutes from the overground station.

What should we have? As with any French bistro, the menu here changes regularly. Turbot, Sea bream and Cod frequently feature amongst the most popular mains. The Pigs Cheeks, Scallops Sashimi and generous Cheeseboard are said to keep the Michelin inspectors visiting regularly.

Worth the journey? The food served at Chez Bruce is similar in style and quality to what you might experience in Mayfair establishments at few miles north, but at a fraction of the cost.

Bistro Union is the second restaurant from Adam Byatt (who also owns Trinity). With ex-St John bread and wine chef Karl Goward in the kitchen, the team have singlehandedly set out to improve Clapham’s dining credentials.

Where is it? Tucked away on Abbeville road, an artery which runs right through the heart of this residential area, Bistro Union is about a ten minute walk away from Clapham South underground station.

What should we have? ‘British tapas’ might seem like an odd way to describe your menu, but it’s these bar snacks that keep the regulars returning for a bite and a glass of wine. Sausage and sage puffs, Anchovy toast and Union Smoked Salmon are all firm favourites.

Worth the journey? Adam and the team have worked hard to establish Bistro Union as a true neighbourhood spot. The inviting interior, afternoon tea and menus developed especially for children goes a long way to achieving this.

And while you're down south, also try...