From elegant gardens running down to the Thames, to restaurants actually floating on the canal, we pick some of London's loveliest waterside gems to dine at. 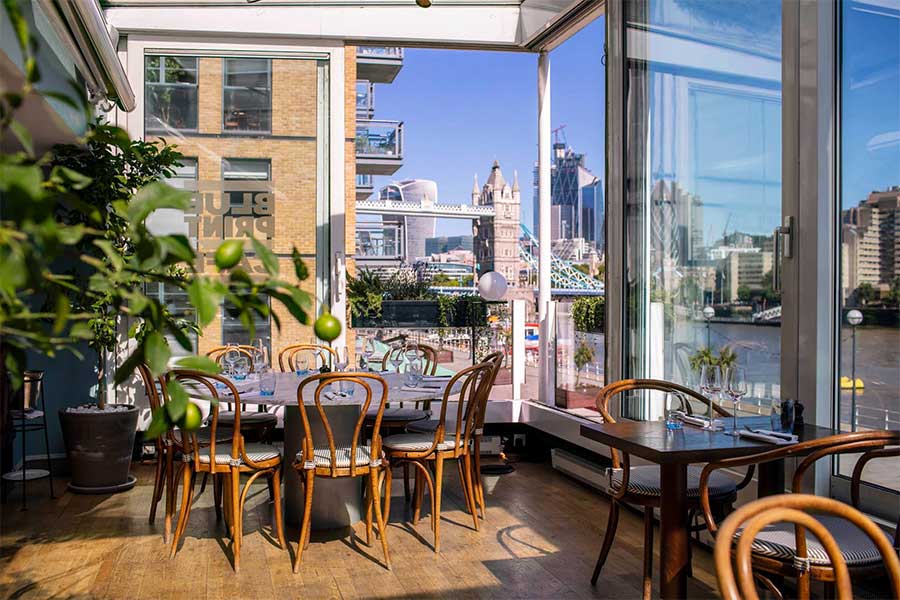 With smashing views over to Tower Bridge and the river, this longstanding riverside spot serves up a very British seasonal menu. It was closed since the first lockdown, but is now open for hiring out and events.

Find out more about the Blueprint Cafe 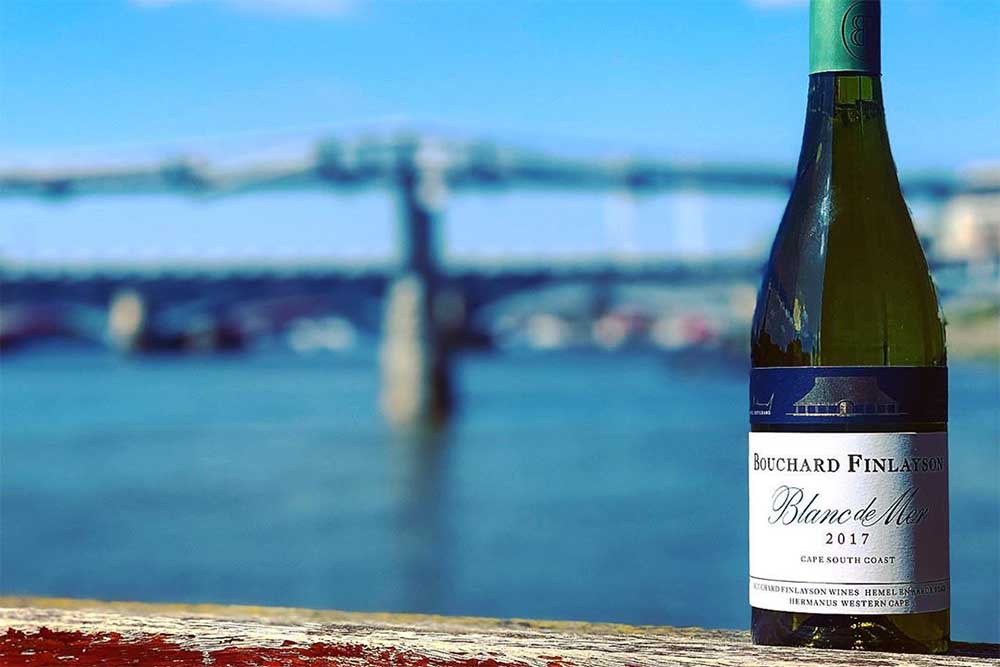 Once you've found this Thameside restaurant, hidden away off the north elevation of the Millennium Bridge, you'll consider yourself pretty lucky. Settle down with a glass of Jordan Chardonnay - the restaurant is owned by the winery - this is a good place to watch the sun go down. There's a distinct South African focus to the menu  - with plenty of grilled meats and homemade biltong.

Find out more about High Timber 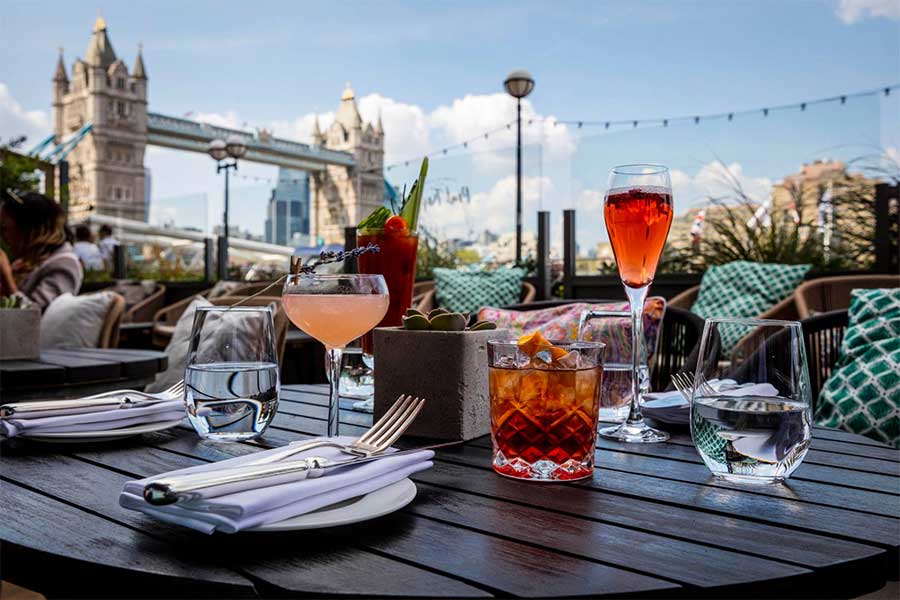 One of the more famous riverside restaurants in London, this institution has a series of head chefs over recent years, but one thing that hasn't changed is one of the most spectacular views of the Thames. There's usually a good platter of fruits de mer to be enjoyed alongside the river views. Coppa Club by Tower Bridge (above) has some pretty amazing igloos looking out over the river that have been given a spring design update.

The restaurant at Sea Containers London opens out onto the South Bank for the kind of riverside view any visitor to London would love. Reopens 16 April - with bookable sessions at the weekends.

The Ivy Tower Bridge has a lovely riverside setting, but if you manage to get into their private dining room upstairs, the views of the river are wonderful.

Grab an outside table at Emilia's Crafted Pasta and gawp at the spendy yachts moored in St Katharine Dock. 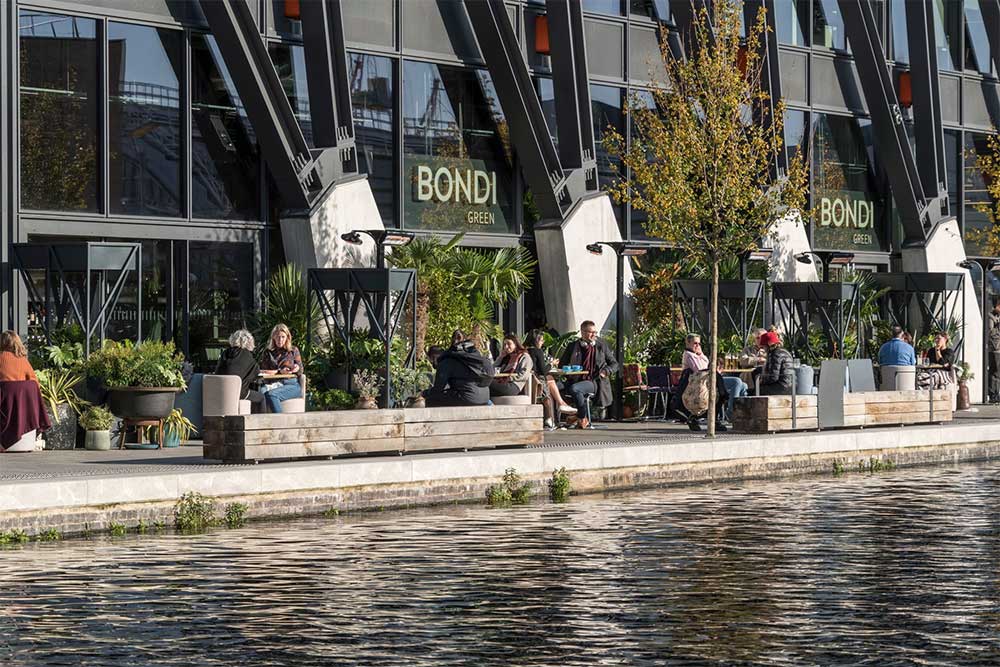 The newest, and flagship location for the Daisy Green company, Bondi Green, opened very briefly before the Christmas lockdown. But the April reopening should see its extensive, heated terrace at Paddington Central be quite the draw. Brunch will be particularly good here, with their in-house patisserie.

Find out more about Bondi Green 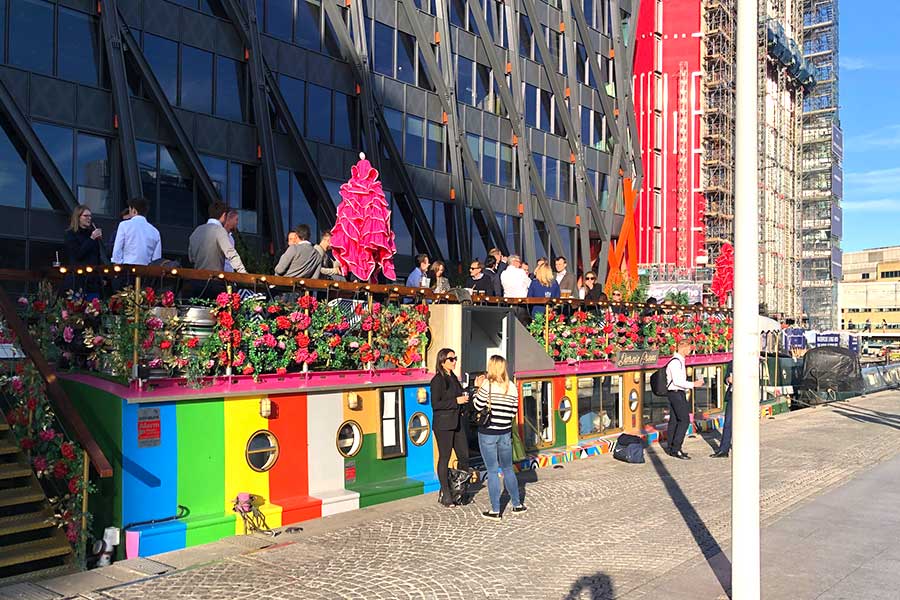 Darcy and May Green

Not so much waterside as actually on the water, these two barges, designed by British pop artist Peter Blake, form the floating restaurant from the Daisy Green people, parked out at Paddington. There's an Australian/Pan Pacific feel to the menu, and if you're after an Aussie brunch on the canal, this is always a good place to come to.

Find out more about Darcy and May Green 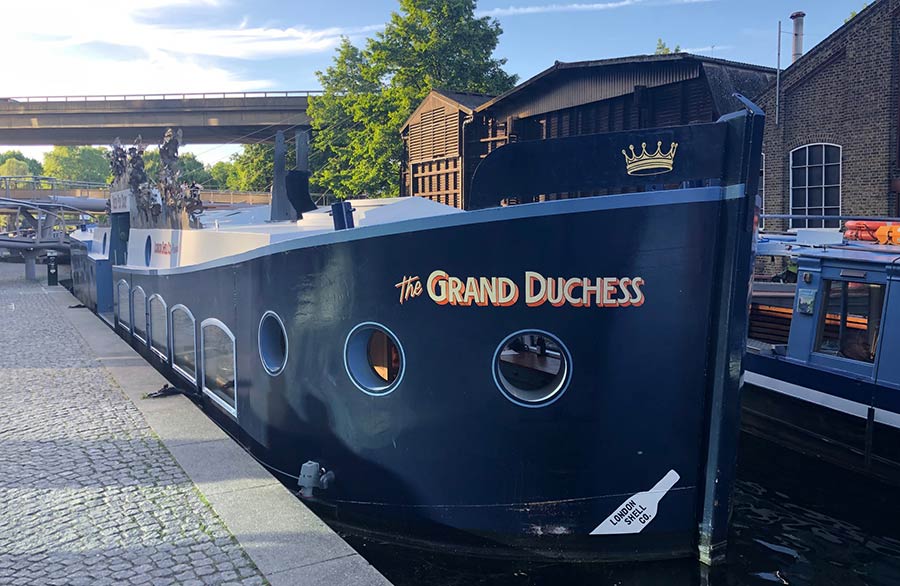 Why eat by the water, when you can eat ON the water? The second craft to take to the water from the London Shell Co. is on a permanent mooring by Paddington. It serves up a mainly seafood menu with dishes like lobster cocktail and a must-try Coronation crab and mustard cress roll. A strong sparkling wine list includes a great English own-label one that you definitely should try. And it now has a large seating area on the canalside for alfresco dining.

Find out more about The Grand Duchess 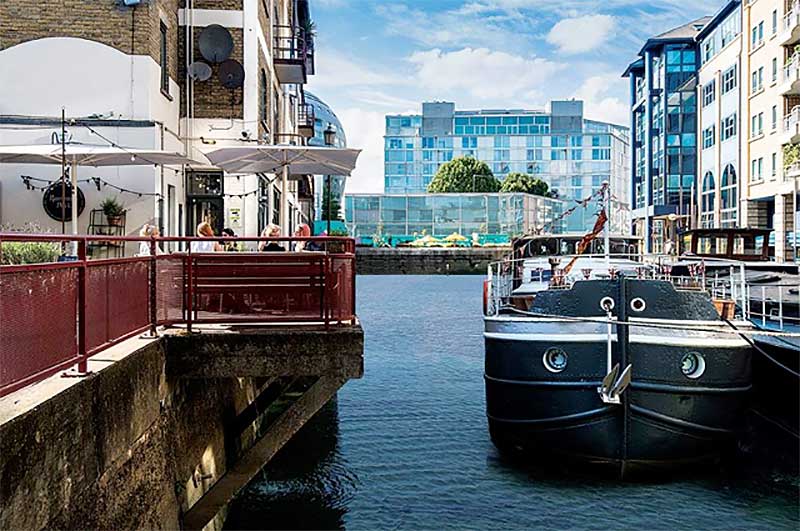 Run by the Gladwin Brothers, this restaurant with a large terrace overlooking Ransoms Dock is all about seasonal British food with much of it coming from their family's estate. Enjoy queen scallops with garlic butter and garden herb crumb along with a glass of fizz from their family vineyard in Sussex.

Find out more about Nutbourne 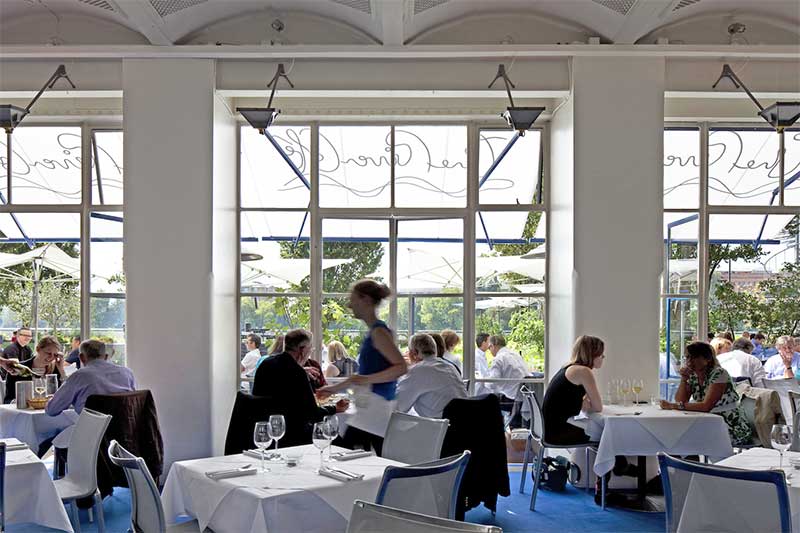 Ruth Rogers' riverside restaurant began life as a work canteen but is now one of London's loveliest (and spendiest) Italian restaurants. As for the food, there might be vitello tonnato, or Taglierini al Bosco with wild asparagus, hops, herbs and Pecorino. What it definitely will be, is both pricey and delicious.

Find out more about The River Cafe 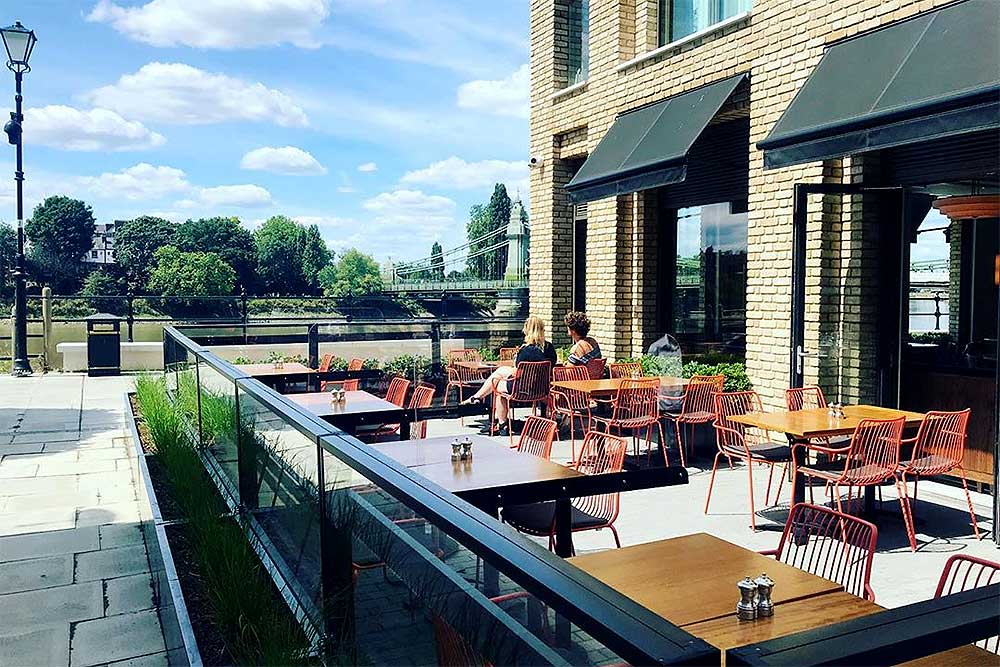 Making full use of its riverfront location by Hammersmith Bridge, this newish riverside restaurant also has a large terrace with room for more than 30 diners. They're serving up a seafood menu with oyster platters and dressed crab alongside frozen margaritas. 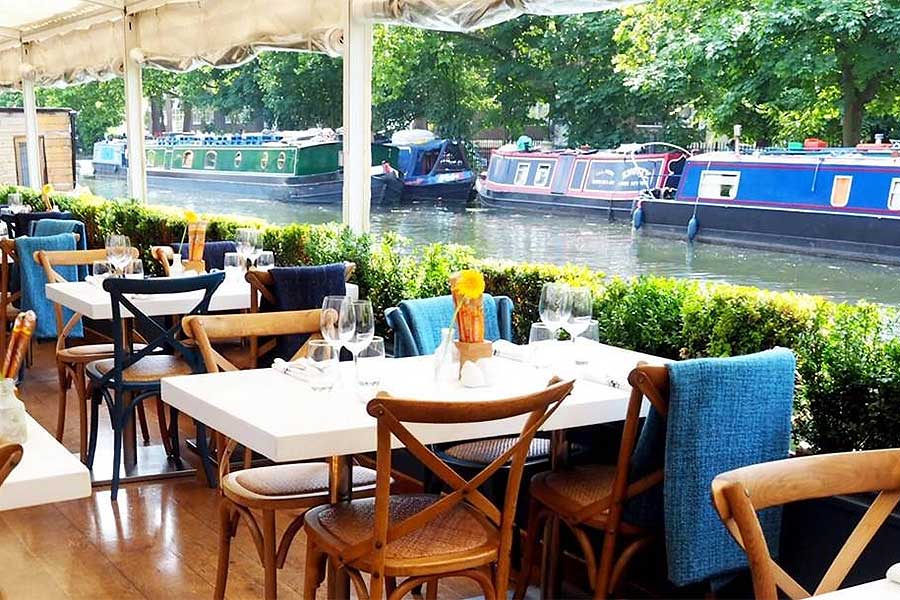 Run by the folks behind local Waterway restaurant in Little Venice, this canal-fronting cafe began life as a summer pop-up but now runs all year round. Seafood is the thing here (naturally) so lobster with potato salad, watercress and aioli or half a dozen oysters should do the trick.

Find out more about Summerhouse Thai Square Putney Bridge (above) has been designed to make the most of its riverside views. Reopens 17 May.

Cottons at St Georges Wharf has a super spot by the Thames, allowing you to knock back one of their super daiquiris as the sun sets.

The Old Ship in Hammersmith has a decent sized terrace right on the riverside and serves up a good brunch.

In Brentford Rye By The Water overlooks the River Brent and does a mean line in great pastries and sarnies. 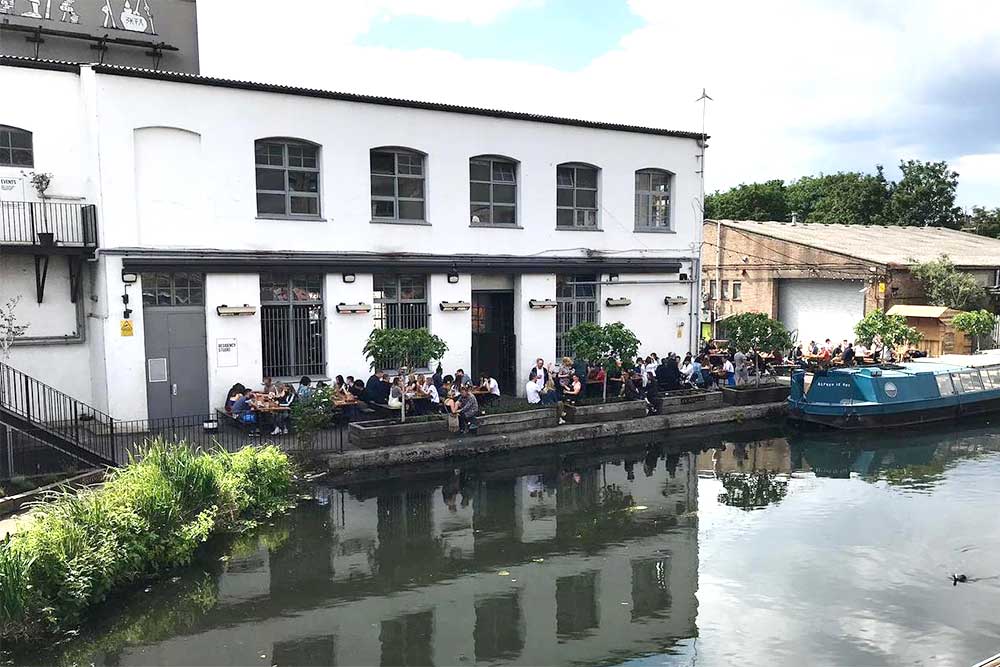 The canalside terrace at this East London brewery is always busy, and no wonder when the pizzas (and the beer, obviously) are this good. You could go for the usual margarita, but why would you when there are options like the Kashimri Dahl with cumin seeds, chili flakes, crispy shallots and mango chutney?

Find out more about Crate 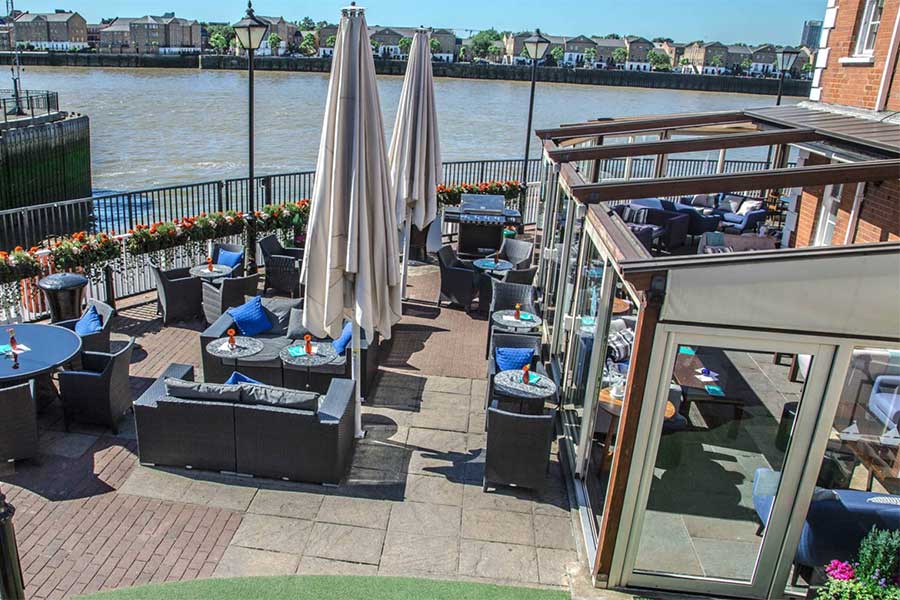 Gordon Ramsay's East London gastropub has a cracking spot here in the Docklands. If you're not lucky enough to secure a spot on the actual terrace, the conservatory restaurant also has a retractable roof.

What's on the menu? It's an elevated pub menu here, so beer-battered haddock with chips and mushy peas sounds perfect.

Find out more about The Narrow 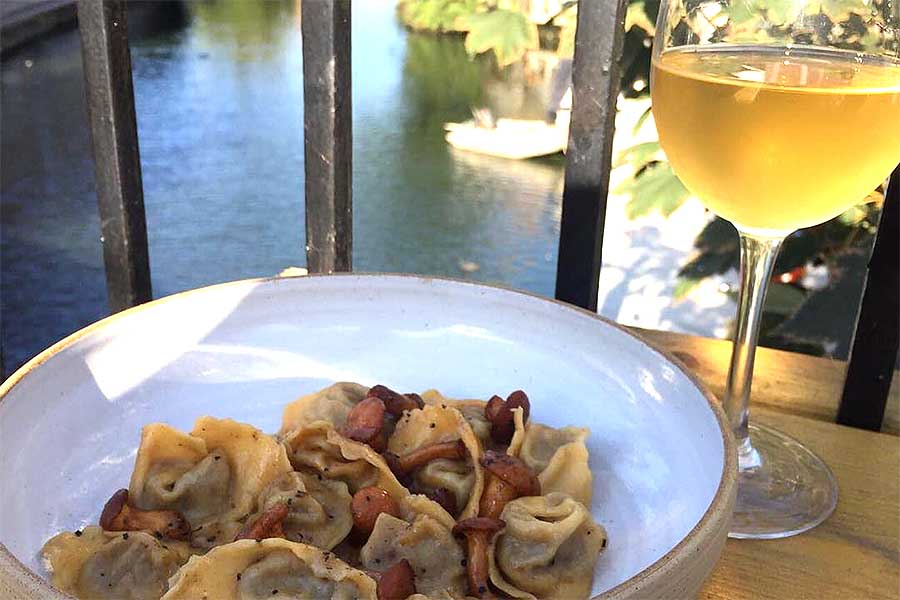 Perched on the south side of the Regents Canal as Mare Street crosses over it, Ombra is what would happen if you plonked a Venetian bacaro down in East London. The food marries British produce with Italian recipes.

What's on the menu? There's usually a good set lunch deal with a wide range of cicchetti and antipasti.

Find out more about Ombra 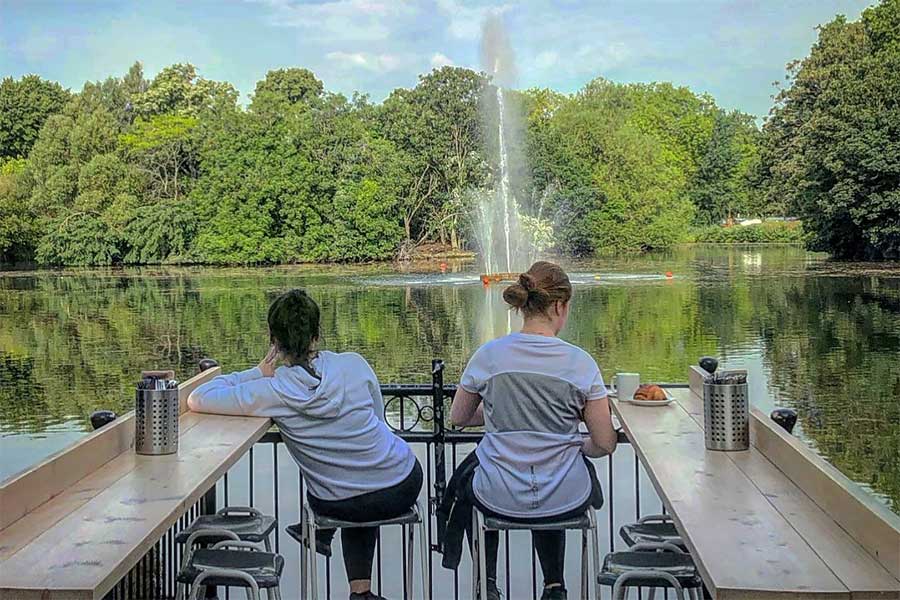 There are now four Pavilion Cafes (including one in Cornwall) but this is the original and the best one for an urban waterside experience with its beautiful terrace overlooking the West Boating Lake in Victoria Park. Their alfresco terrace will be the first part to open, but a brand new BBQ that was installed during lockdown promises good things for the summer.

Find out more about The Pavilion Cafe 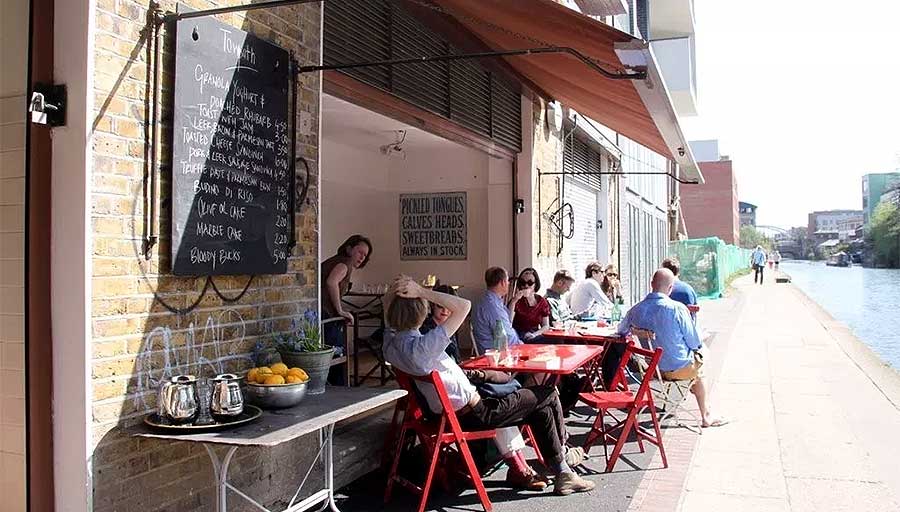 This little cafe down on the canal in Hackney is one of London's best waterside spots. They also published their first cookbook last Autumn. Expect a daytime reopening first, with dates of supperclub dinners to follow Reopens 15 April. 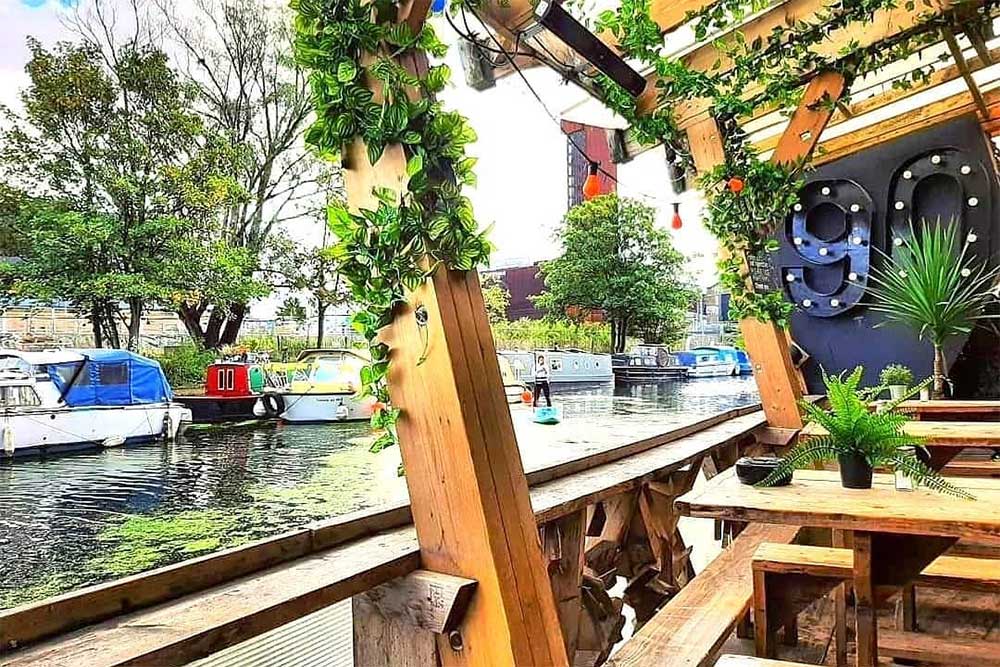 The Gun - This Docklands pub has a super Gin Garden right by the river and this summer's menu includes an enticing sounding Cornish crab roll with fries. Reopens 17 May

The Princess of Wales - this Clapton gastropub serves out thoughtful food with a nice pub garden overlooking the River Lea. 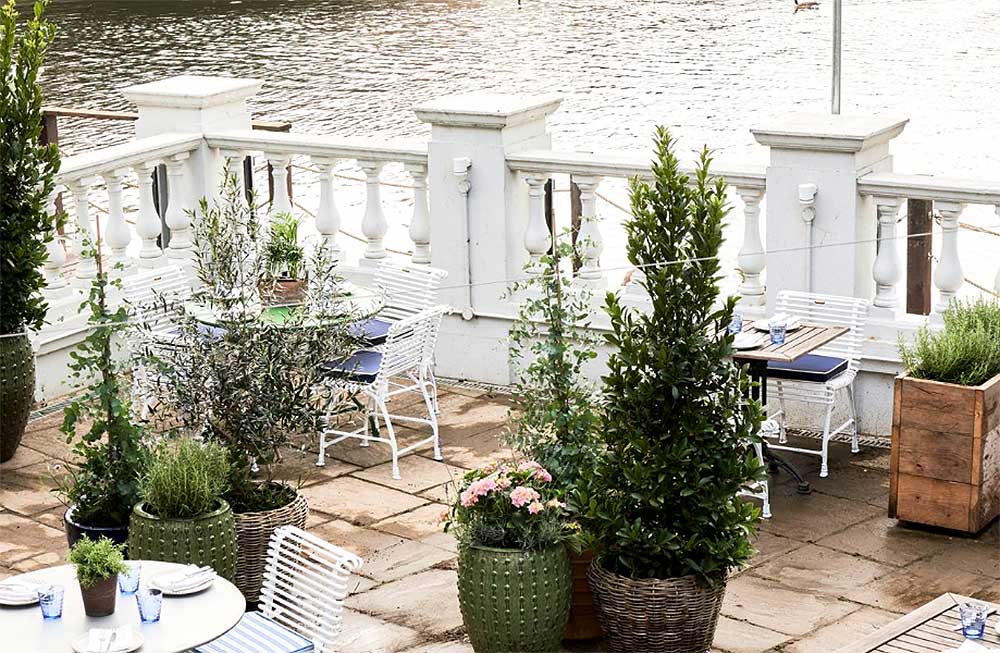 This boutique hotel boasts several restaurants and bars, but the one you need to know about is this, their riverside brasserie with a lovely terrace overlooking the river (which is covered during the winter and spring). There's also a Whispering Angel riverside rose shack for summertime drinking. 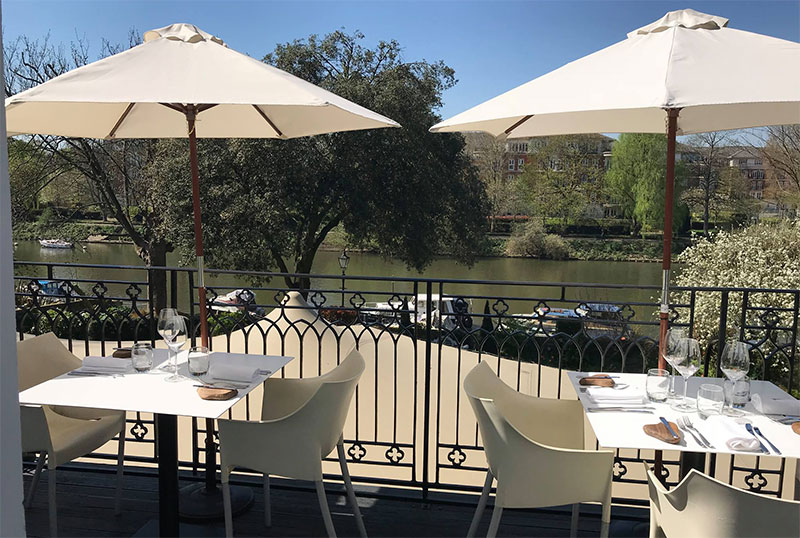 Head way out west to Richmond and you can find one of the best waterside spots in London at the idyllic Bingham. Expect a high-end food experience to match the view with MasterChef The Professionals winner Steven Edwards running the show.

What's on the menu? Expect a menu chock full of seasonal goodness. The restaurant's terrace reopens on 12 April with a menu of small plates.

Find out more about The Bingham Riverhouse 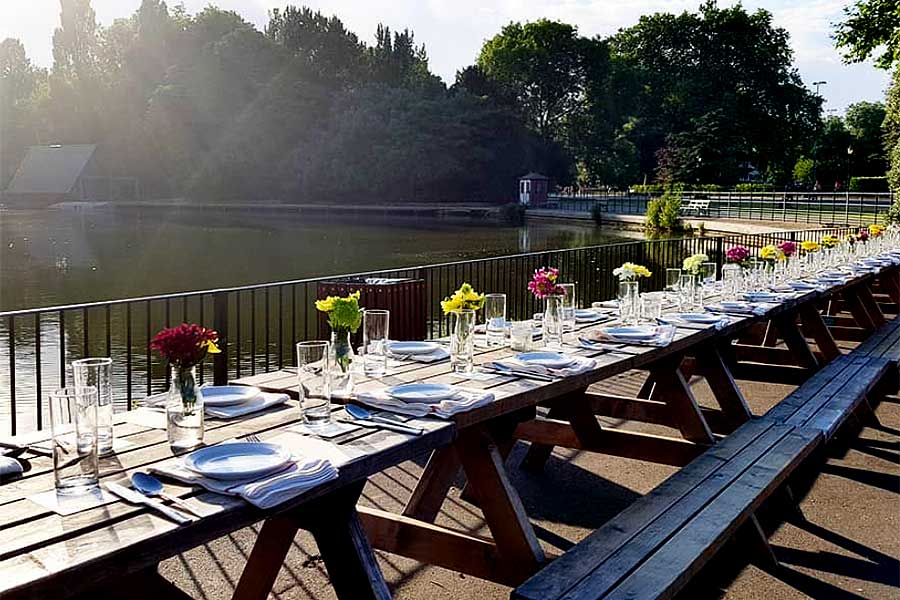 With an ex-Petersham Nurseries team on board, this is definitely several steps above your average park cafe. It's also very popular for private events.

What's on the menu? It changes regularly but you can always rely on great BBQ burgers and sourdough pizzas here. 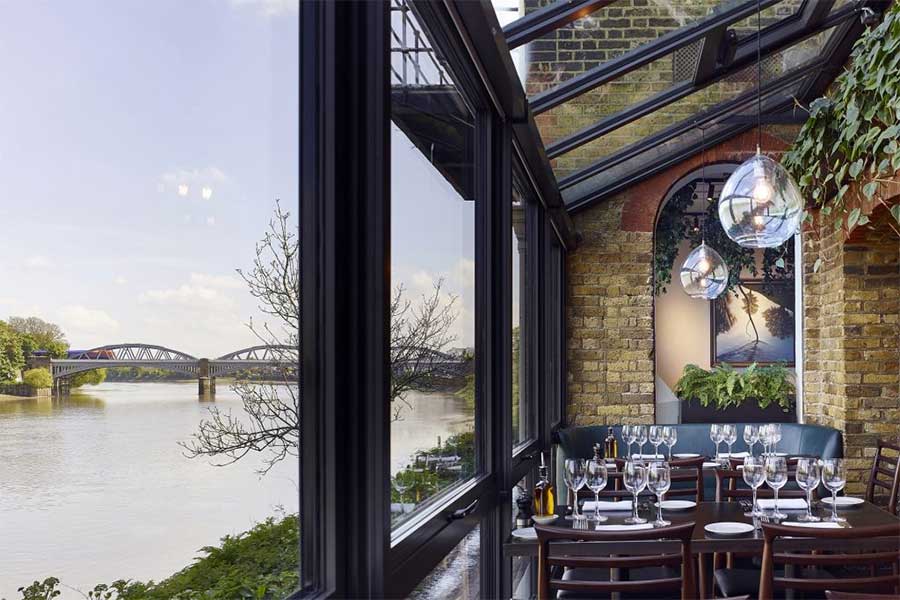 South London may be a long way from Cornwall, but Rick Stein has swapped seaside for riverside with his first London restaurant. There's a wonderful view over the Thames here - the spot to covet is the central section with the tables by the window. Reopens for courtyard dining on 12 April.

What's on the menu: As you can imagine from a Rick Stein restaurant, there's a strong focus on seafood. The Indonesian fish curry is amazing - pair that with a lovely glass of wine chosen by Rick's son Charlie. 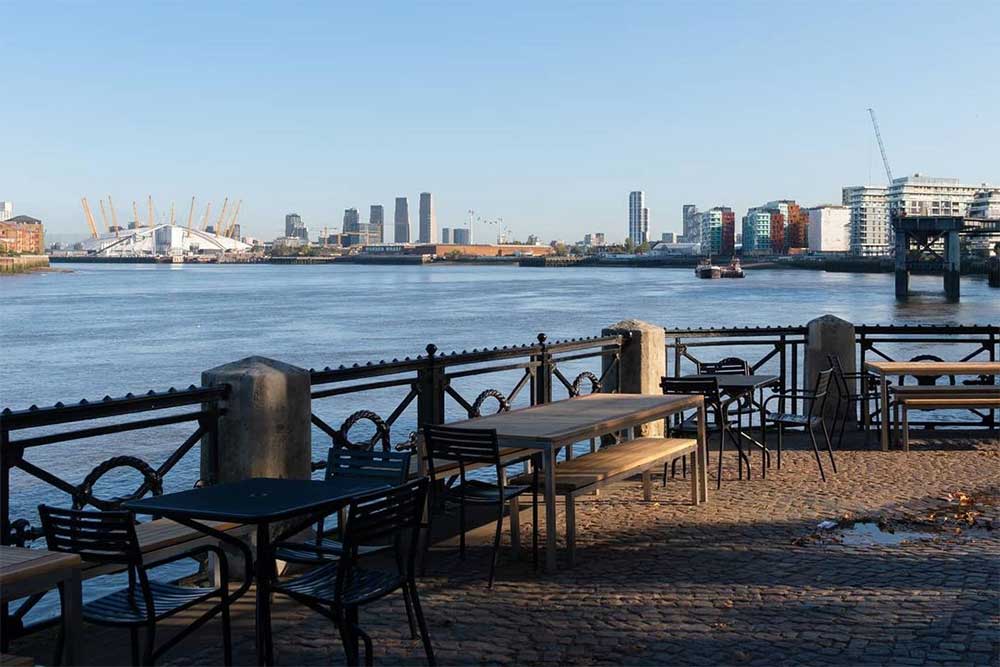 This Victorian pub is a super place to bookend any riverside walk around Greenwich. The menu got a fairly recent overhaul so while there's a ploughman's on there - this one features Keens cheddar, Beauvale, ham hock terrine, sourdough and a beetroot pickled egg. There's also a rather nice terrace if you can get a table.

Find out more about Trafalgar Tavern

The Stable Kew Bridge does decent pizzas when it's open and, as the name suggests, is slap bang on the riverside. 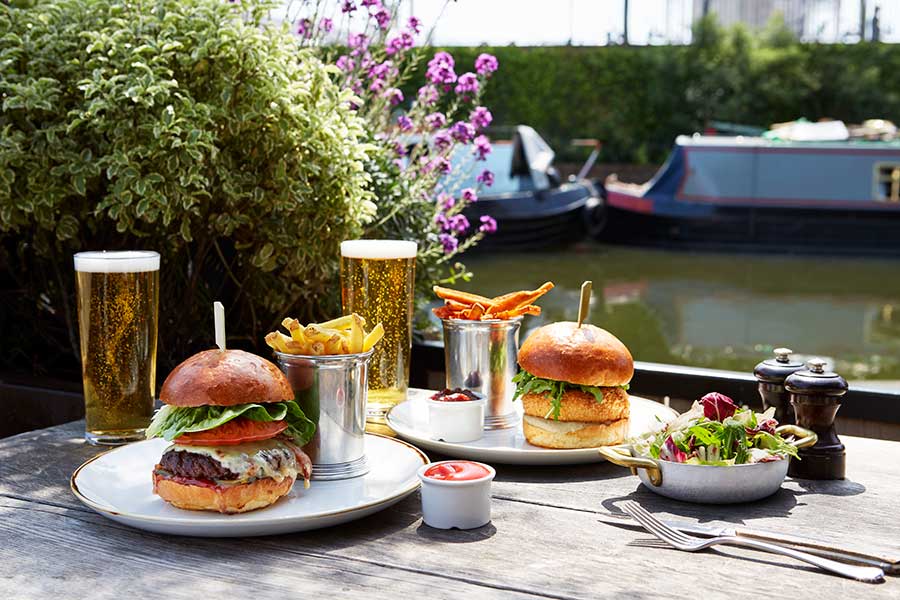 Taking up a large part of King's Cross's Granary Square this restaurant was named after the Victorian Lightermen who worked on flat-bottomed barges, known as “Lighters” here on the Regent's Canal. This three-floored restaurant makes the most of its position with terraces galore.

What's on the menu? It's a broad modern British/European menu. We've had the crispy squid with chilli and lime a few times now and it's always good. But the foraged wild mushroom tart with watercress salad sounds very enticing.

Find out more about The Lighterman 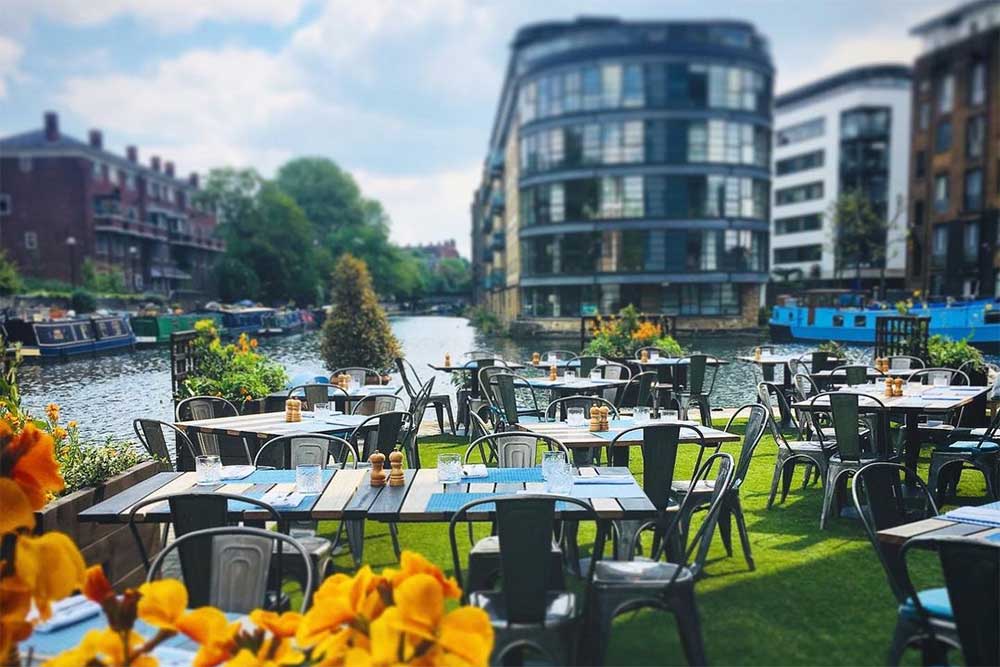 If farm to table is your thing, then this King's Cross restaurant is the perfect spot for you - all their beef and lamb comes direct from their own farm in Northumbria. Their waterside setting is pretty impressive too, there's a massive wraparound terrace overlooking the Regents Canal.

What's on the menu? How about the Goat’s cheese soufflé with crispy kale, spiced pecans and wild herbs?

Find out more about Rotunda

Cafe No 5 - This towpath cafe in Islington overlooking City Basin is a favourite with local workers, serving up great coffees and pastries along with the trad smashed avo on toast for breakfast.

The Narrowboat - as the name suggests, this Young's pub is perched overlooking the Regent's Canal with two handy terraces for alfresco dining and drinking.