London's pizza game is STRONG. For the pick of the crop, including delivery options, check out our roundup. 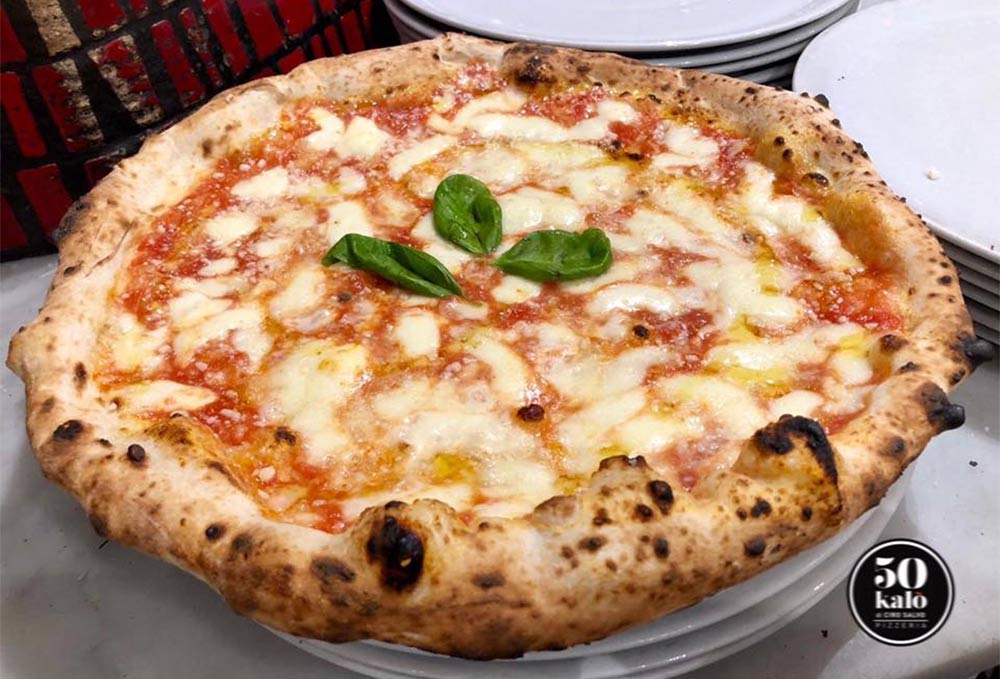 One of Naples' top pizza restaurants, Pizzeria 50 Kalò di Ciro Salvo's London spot sees them creating as close to that Neopolitan experience as possible. It's all about the dough - 50 Kalo refers to "good dough" - and the menu features a much larger selection of pizzas than other Neapolitan imports. The Evening Standard's David Ellis says they're "serving London’s best pizza.". Big talk indeed. 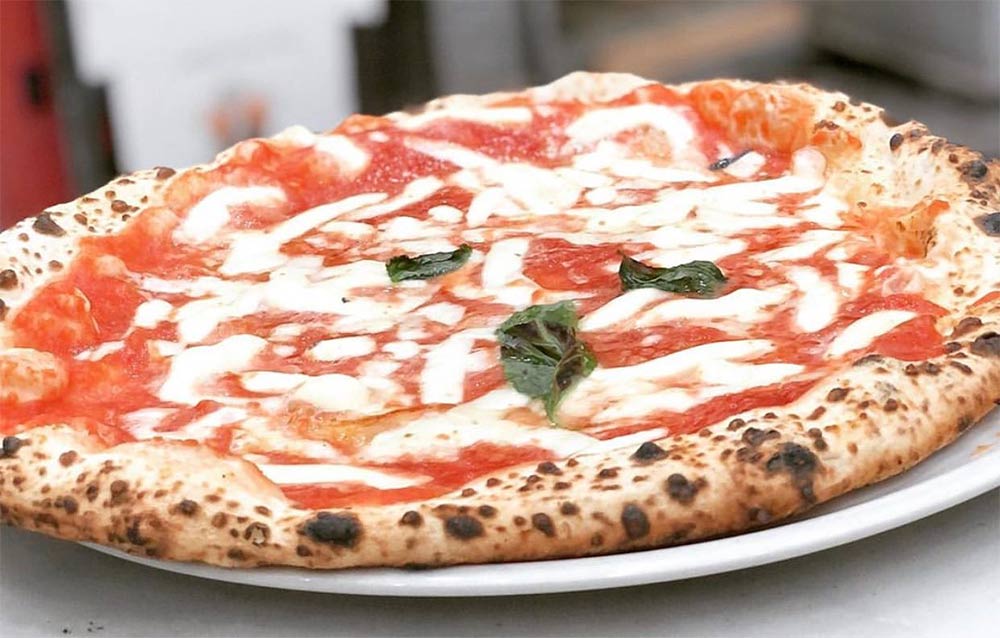 London went completely nuts at the arrival of what was dubbed Naples’ (and by that the world’s) best pizza. After some dispute over the use of the name, L'Antica Pizzeria da Michele is now housed in Baker Street and Soho. When they started, they only did two pizzas, a Margherita and a Marinara (which they do very well) but they've now expanded with a lot more options - including a fried pizza. 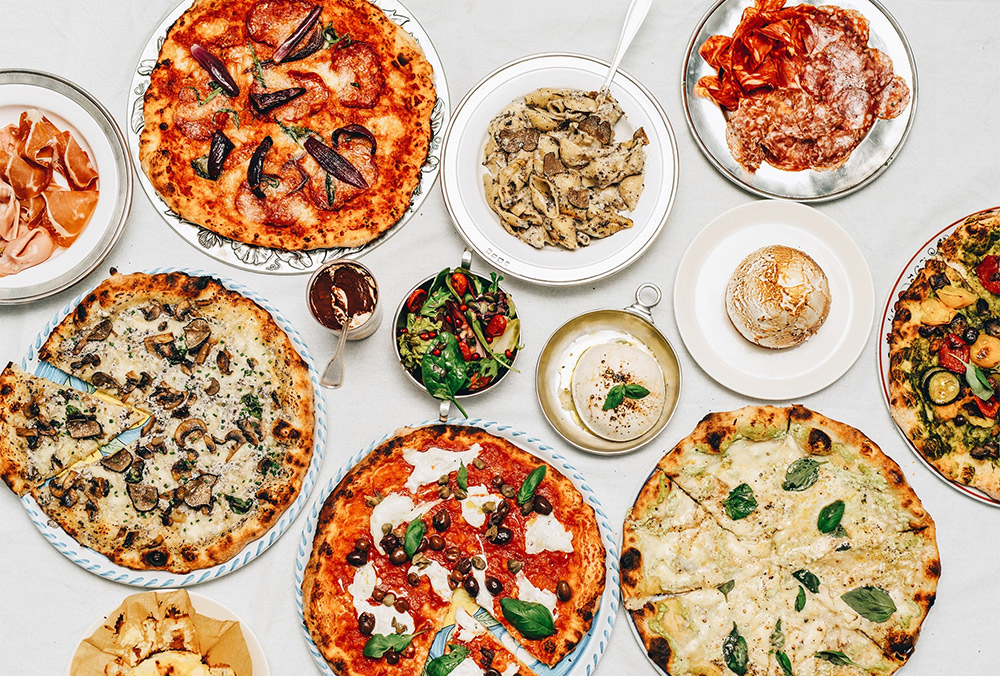 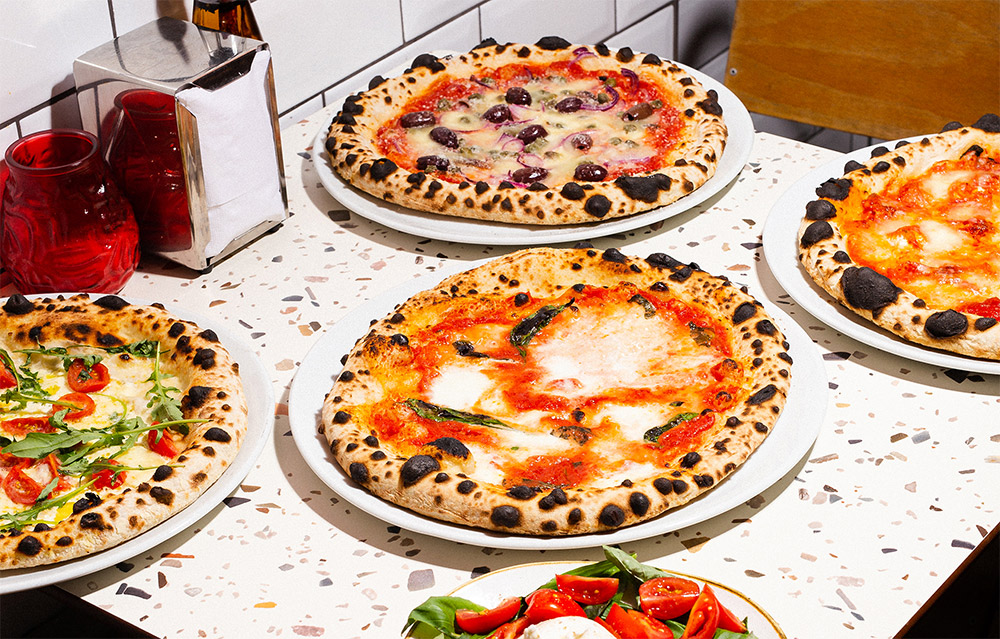 This Dalston Pizzeria comes from an ex Yard Sale GM and quickly became a Dalston favourite. Expect their own take on traditional Italian pizzas, including the "Italiano Maximo" which features guanciale, pecorino, garlic, and parmesan breadcrumb. 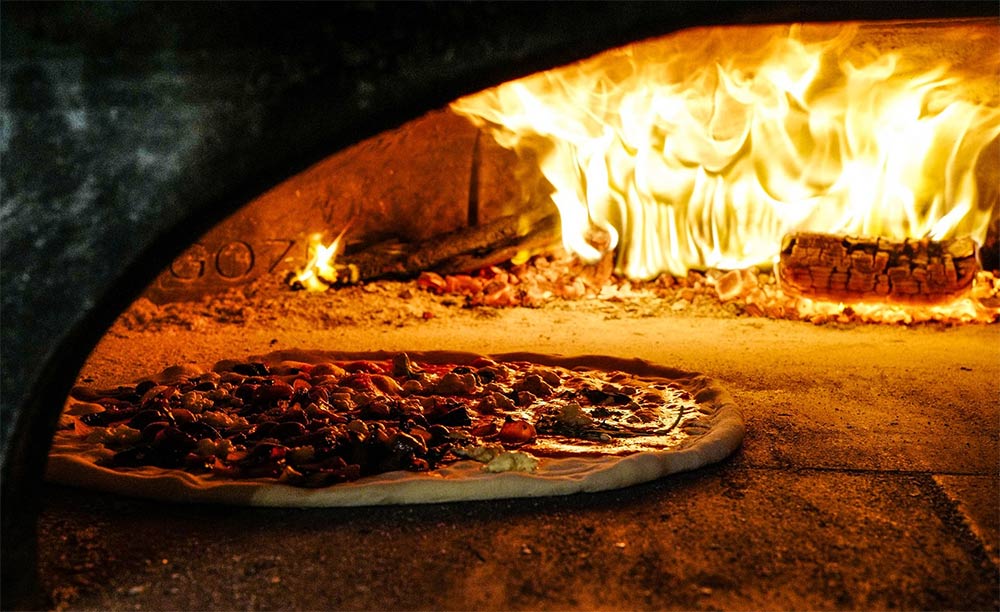 Ry Jessup started Homeslice with a hand-built mobile wood-fired oven hand that he launched at London Fields Brewery. He did a shed load of festivals and the like before teaming up with Mark and Alan Wogan, sons of the late great Sir Tel, to open their first restaurant. You'll find the traditional pizzas here, but they're also keen on coming up with unique flavour combinations - kimchi, porcini cream and basil anyone? The pizzas are also HUGE - a regular is 20".

Delivery options: Via multiple sources. They also have pizza kits. 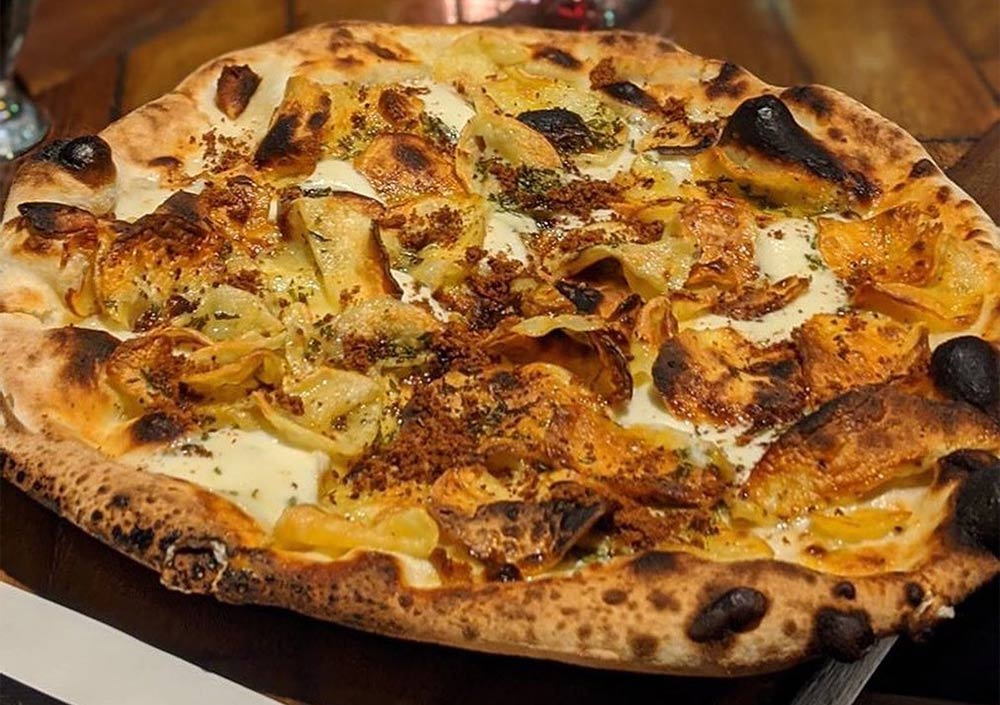 Originally not strictly a pizzeria and more of an Italian (by way of Hackney) restaurant, the emphasis is now on Lardo’s pizza section. In addition to the classics served up by former Bistrotheque manager Eliza Flanagan and partner Hugh Thorn, pizzas include regularly changing seasonal specials - such as Braised leeks, roast garlic, rocket pesto, almonds.

Also on the menu: A good selection of seasonal antipasti as well as a pasta of the day main course. 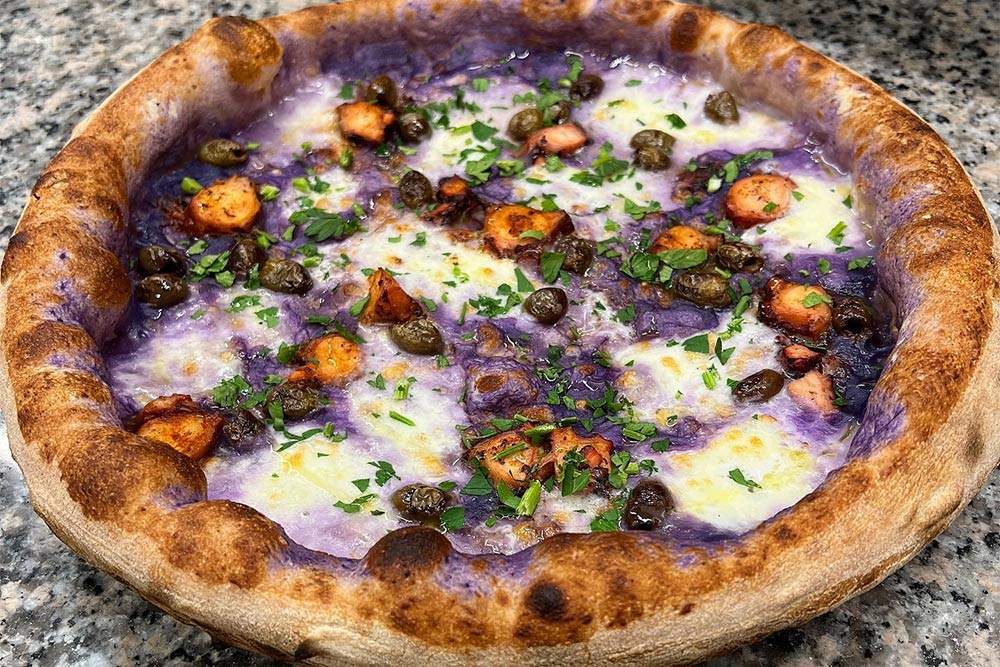 Moving slightly away from the norm, Manifesto Pizza sets out its stall right from its name. That particular "manifesto" is all about using the best possible Italian ingredients (Molino Pasini flour, Pugliese mozzarella, etc). Their pizzas are a little different from the norm too, including Goat + (goat cheese, heritage beetroot, parsley) and Pumpkin Pie (mozzarella, gorgonzola cheese, pumpkin, red onion, speck). 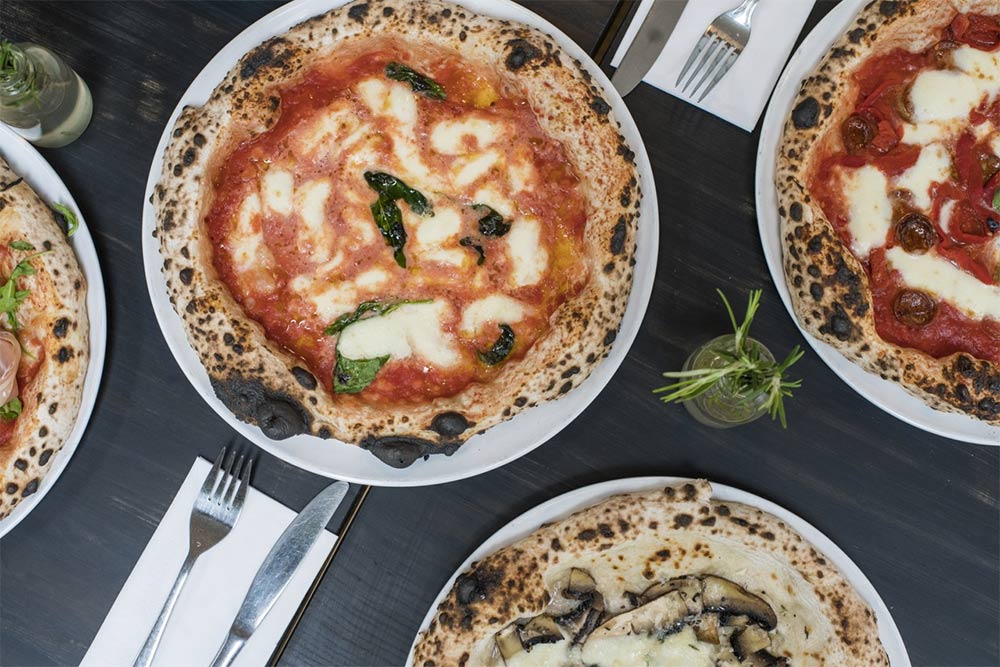 Coming up the street food route like so many others, Made of Dough’s first bricks and mortar spot was in Peckham. They’ve stayed true to their roots, roping in local butchers Flock & Heard for the sausage on their Merguez pizza. They use a lean dough recipe with a 60-hour fermentation process. The mozzarella's driven fresh from Campania twice a week and the parmesan's aged for over 30 months.

More about Made of Dough 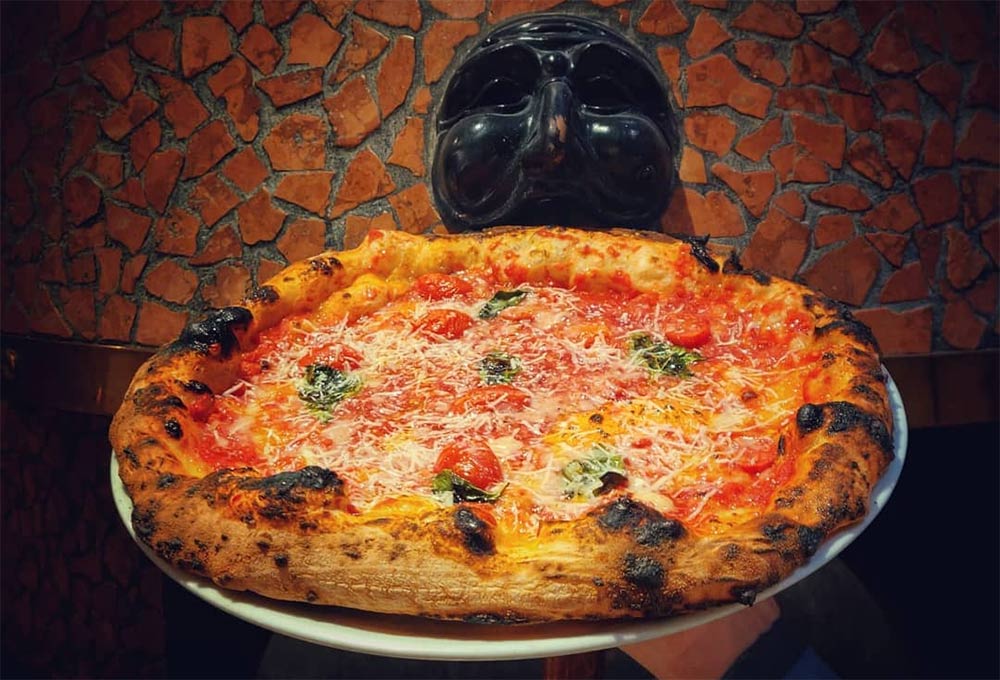 Stoke Newington does rather well in the Neapolitan pizza front with this and Vicoli being excellent representations. Oi Vita hail from Italy and their chef is the second generation in a pizza-making family from Naples, while their 24hr fermented dough has an emphasis on lightness. Their signature is the classic Cosacca - tomato sauce, red cherry tomatoes, Parmesan and Pecorino romano cheeses with basil. 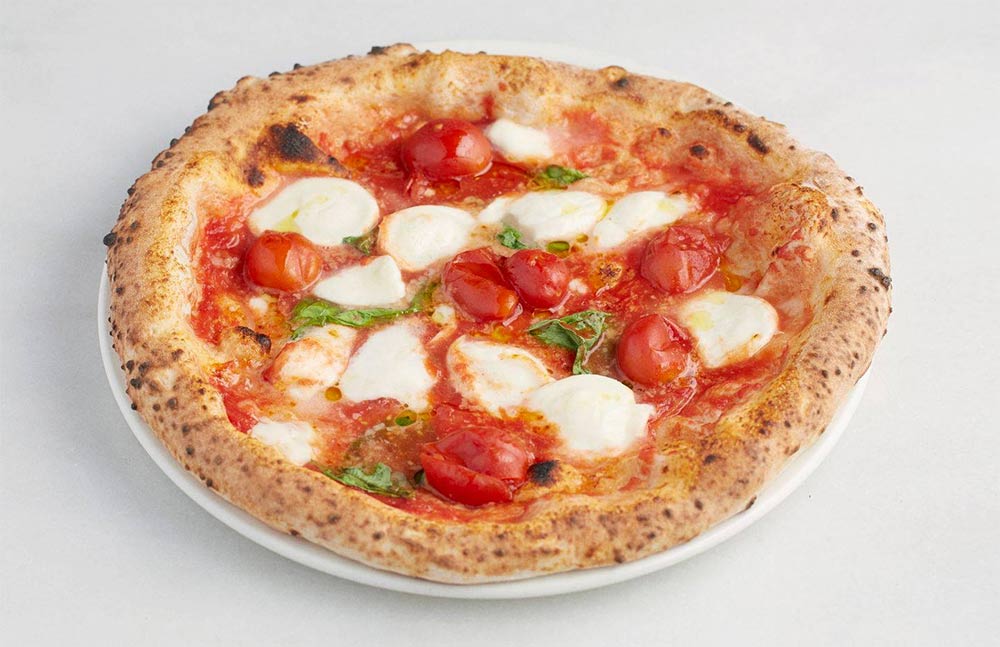 O-ver's key feature is that the pizza dough is infused with real purified seawater. That may sound like a gimmick, but the pizzas that they're producing are top class and it's one of the best restaurants in the Borough area as a result. Top of the list to order should be The Paloma - that's "Smoked buffalo mozzarella from Sorrento, wild chiodini mushrooms,  artisan rolled Italian bacon, organic black pepper, basil" 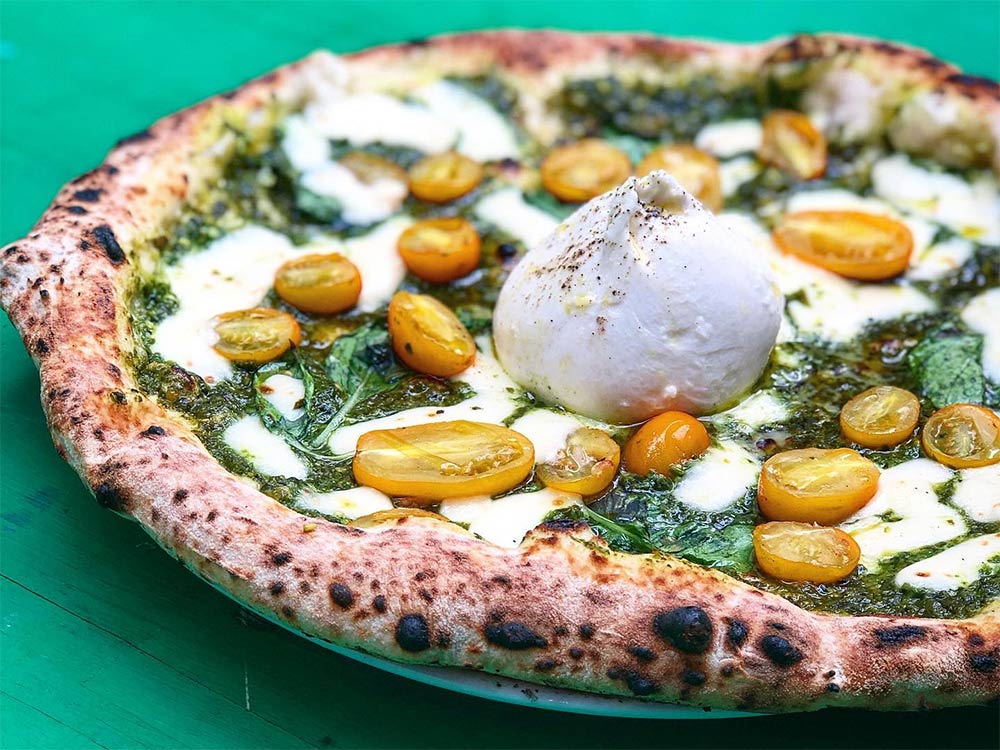 Brothers James and Thom Elliot are the folks behind Pizza Pilgrims. Having bought a van in Italy for their London street food stall they decided to go and get it and drive back tasting the best Neapolitan pizza and mozzarella that Italy has to offer. It seems to have paid off. Ingredients are now flown in from Italy and they attribute their success to "soft dough, really simple, and not overloaded with ingredients. We don't have a complicated menu, we don't have weird toppings."

See also: They have a new spin-off selling pizza by the slice called, naturally, Slice - that's in Finsbury Park

Delivery options: Most are available on Deliveroo and they have frying pan pizza kits by post. 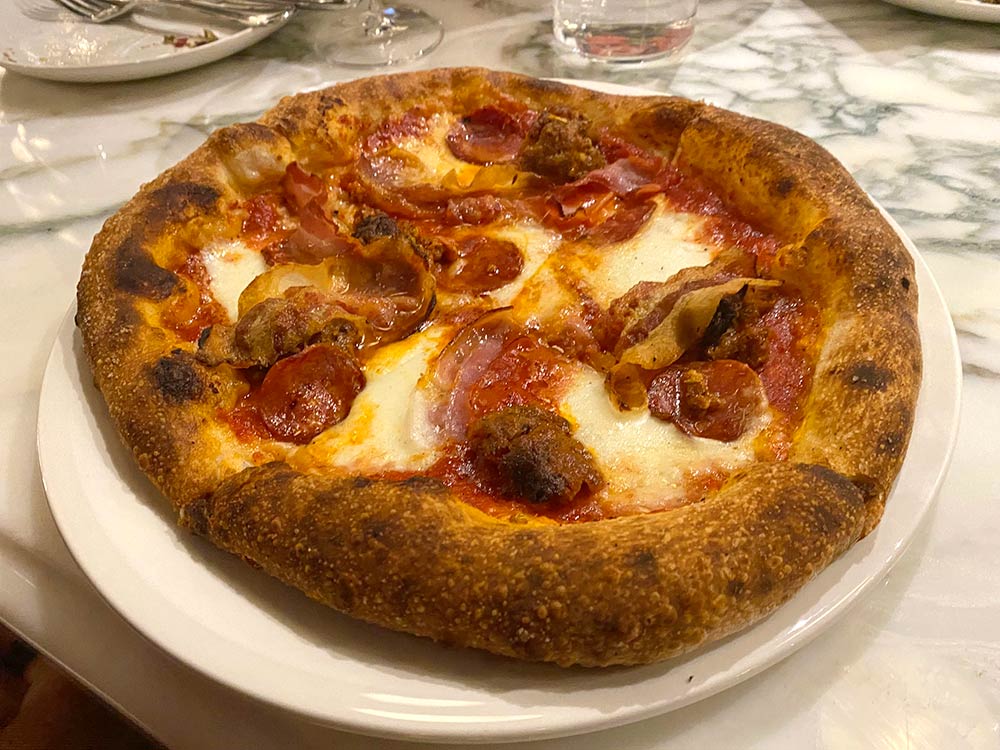 This is the London restaurant of famed LA chef Nancy Silverton. A London version of her LA-based pizzeria, the pizzas are famed for their crust - a lightly crunchy crust on a chewy dough. While you can order a traditional Margherita, many of the pizzas are quite unique, like the PLT (pancetta affumicata, guanciale, onion cream, roasted tomato, rucola & aioli) or the Brussels Sprouts (panna, red onion, pancetta, chilli flakes, pecorino romano & parmigiano reggiano). 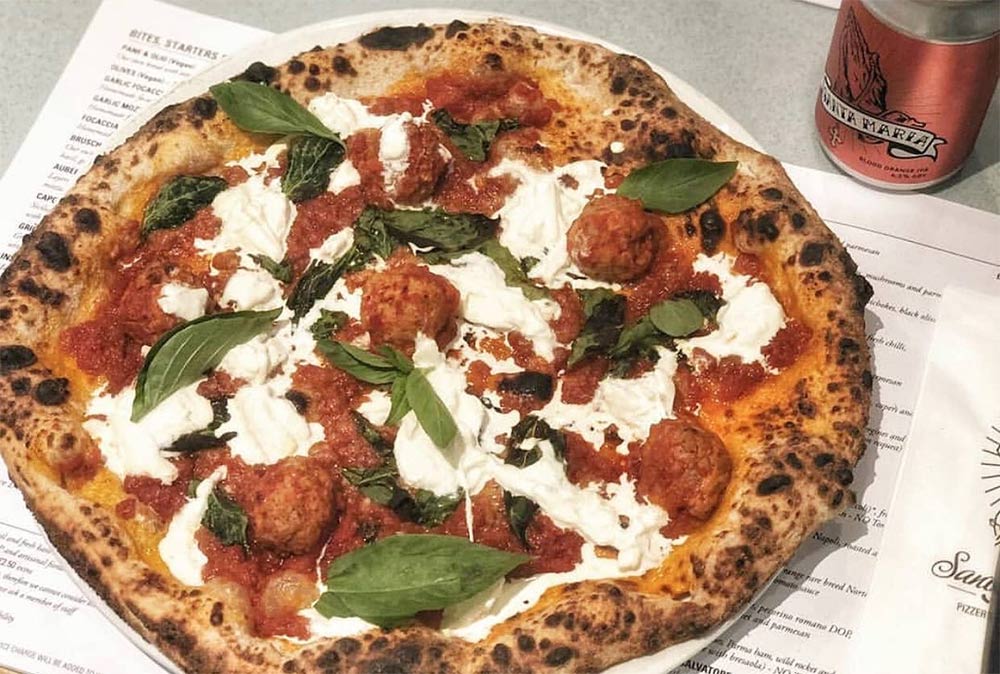 Named after St Mary's Road in Ealing, the site of their first pizzeria, owners Angelo and Pasquale used their Neapolitan heritage and expertise in running pizzerias all over London to open their own in 2010, bringing in master Pizza chefs Lucio Miano Petta and Emanuele Tagliarina to complete the dream team. The ‘Santa Bufalina’, which is just tomatoes and D.O.C mozzarella, is one to beat in London. They also have a spin-off in Clapton called A Slice of Blue. 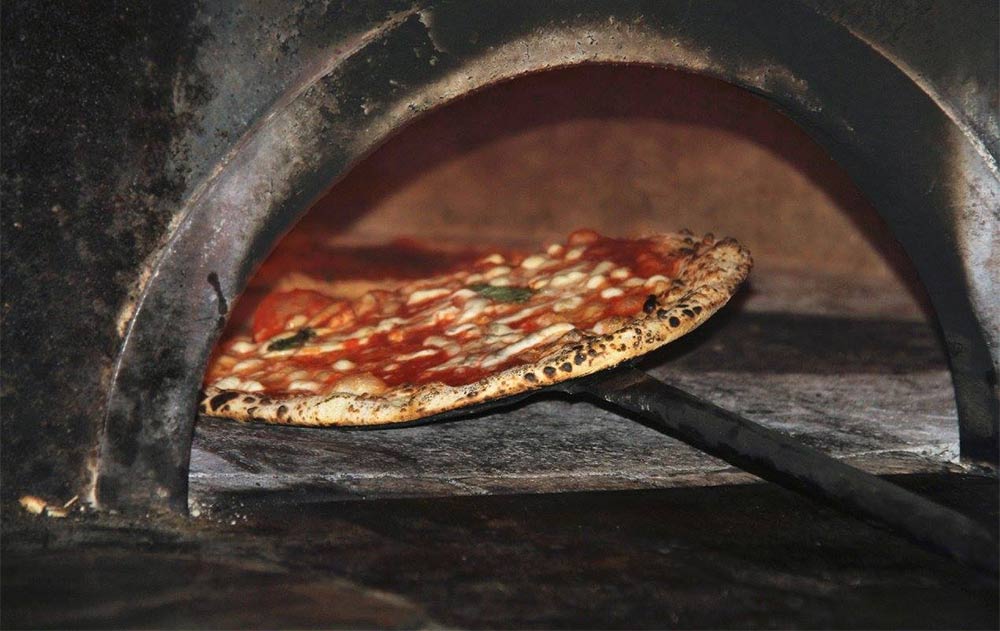 This was the original L'Antica in London before some legal shenanigans, but although it's had a name change, it remains an excellent pizzeria. Expect traditional Neapolitan pizzas with the classic Margherita and Marinara at the heart of the menu joined by Via dei Gerolomini - Prosciutto e funghi (Fior di Latte, Grana Padano DOP, basil, cured ham, mushrooms, extra virgin olive oil). 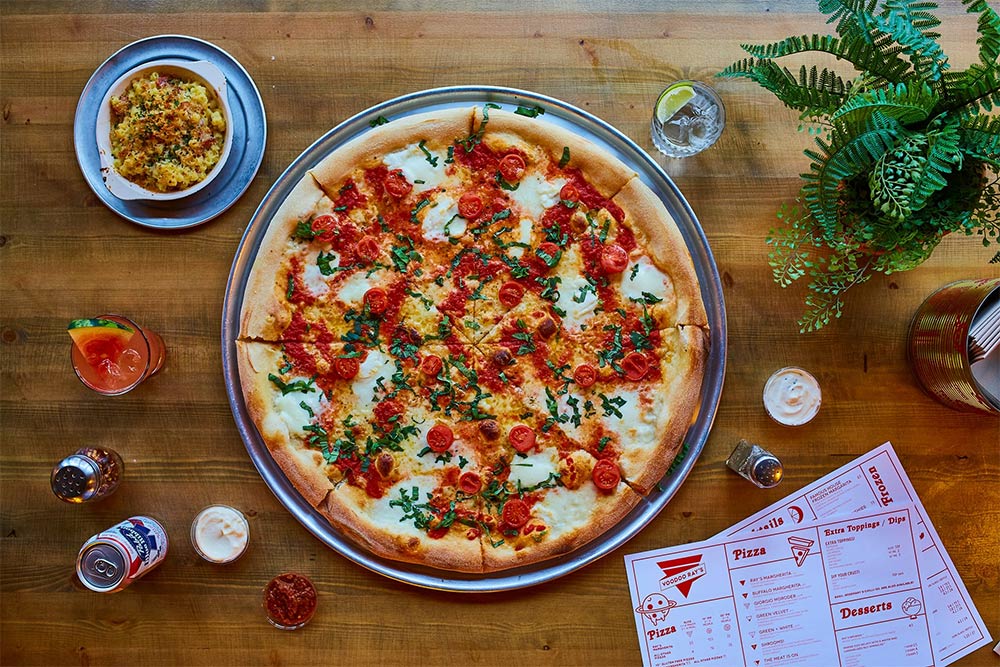 It's all about the slice at Voodoo Ray's. Opening in Dalston back in 2012, their huge 22-inch pizzas are served by the slice, NYC style. The style may be American, but the ingredients are all Italian - they use both Buffalo and fior di latte mozzarellas, Caputo flour and San Marzano tomatoes for the topping.

Delivery options: Via Deliveroo on Peckham, Dalston or click & collect 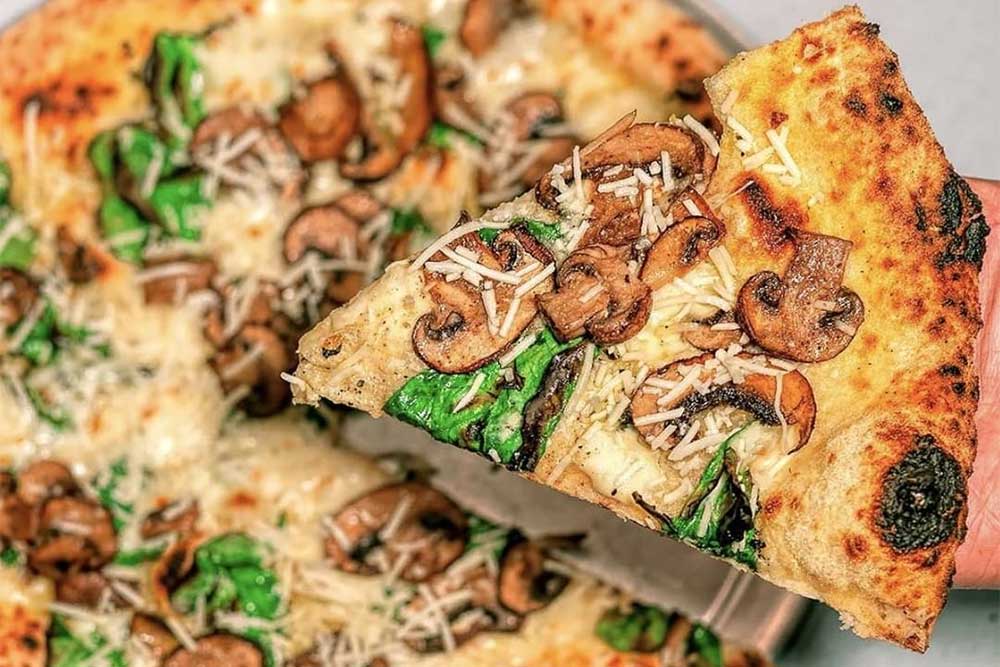 Yard Sale really were originally a home starter business, first setting up in Johnnie Tate's backyard in Hackney, serving up pizza to his and co-founders Nick Buckland and Dan Spinney's friends and family. The opening party of their first place in Clapton has gone down in history for including a secret gig by Macaulay Culkin's band. They've made a particular name for themselves with interesting collaborations and, with the exception of the margherita, the toppings are very East London. 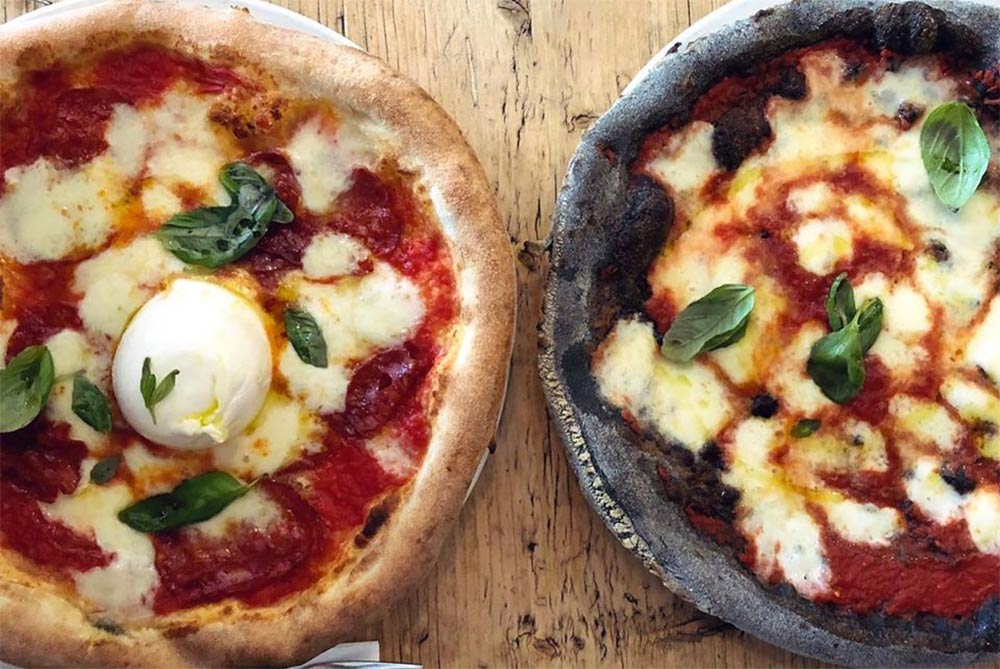 Founders Claudio and Gianluca named their first Holloway Road pizzeria after Gianluca's aunt. Their pizza dough is 48 hours slow-fermented and baked in a wood-fired oven. But probably their key point of difference are the four types of dough available including the Insta-friendly vegetable charcoal (which they delicately explain has "digestive gas-absorbing capacities"), wholemeal, gluten-free and traditional.