The best London restaurants for celebrating the Diamond Jubilee 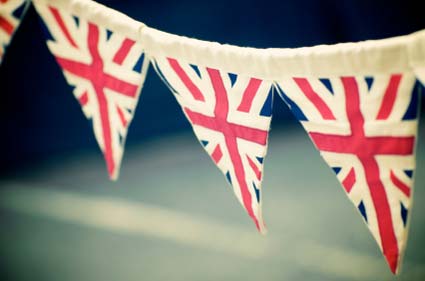 Join in a massive street party on Piccadilly

The whole of Piccadilly will be closed on the day for a special street party. You can book an hour-long slot at the 500 seater trestle table and either bring your own food or stock up from nearby Fortnums or the Wolseley.

Speaking of Fortnum & Mason, you can also take afternoon tea in their special Diamond Jubilee tea salon, opened this year by the Queen herself (can’t get a better recommendation than that).

Anyone who tries the Jubilee Afternoon Tea series at Adnaz’s 1901 will go into the draw to win a pair of diamond stud earrings (valued at £1,250). It’s priced at £45 per head and available Monday to Saturday until June, for sittings from 3.00pm – 4.30pm.

Renaissance pubs will feed your corgi

If you have a corgi or dorgi (it's a cross-breed allegedly), take them to any Renaissance Pub over the royal weekend for roast beef with all the trimmings, dog biscuits and gravy absolutely free - as long as you buy a couple of drinks. The Avalon, Tommyfield and The Rosendale’s will also be offering a replica 1953 Coronation meal complete with a selection of English sparkling wines  and international wines to match.  Plus there will be royal-inspired dishes on their daily specials board.

Find out more about Renaissance pubs.

Limitless champagne at the Northall

It’s near the river for some flotilla watching and on 3rd June, the Northall at the Corinthia hotel is offering a special Jubilee lunch at £45 per person with unlimited Champagne as well as a special Jubilee afternoon trea from 1-7 June.

Tea and lunchboxes at Harvey Nichols

To celebrate the Queen’s Diamond Jubilee this summer, Harvey Nichols’ Not Afternoon Tea will be offering  four regal desserts, including the Queen of Puddings and a Victoria sponge, paired with a bespoke ‘Gloriana’ cocktail made with Beefeater Gin and served with your very own Harvey Nichols Jubilee Lunch Box to take home.  Ideal if you can’t manage to finish everything off. Royal Not Afternoon Tea will be served at the Fifth Floor Café and Restaurant from Tuesday 1 May to Friday 8 June. The tea will be available between 3pm and 5pm and priced at £27.50 per head.

Any couples married for 60 years will be able to get a complimentary meal at Clos Maggiore. But if you haven’t reached that milestone yourselves, there’s also a special four-course Jubilee menu, featuring produce from the royal estate at Windsor Park. The exclusive four-course Jubilee menu is £38 per person or £62 with wine from 2 to 5 June.
Find out more about Clos Maggiore

It’s allegedly the Queen’s favourite tipple, so the Rib Room Bar & Restaurant is setting up ‘Ginbilee’ Masterclasses with Bombay Sapphire’s expert mixologist, Sam Carter. You’ll learn how to make five unique G&Ts,  infusing them with ingredients like Lapsang Souchong Tea Syrup and Rose Flower Water. Available on Saturday 12th, 19th and 26th May from 2.30pm-5pm, masterclasses will be priced at £19.52 in recognition of the year the Queen ascended to the throne. The Rib Room Bar & Restaurant will also be serving the specially created G&T infusions between 7th May and 8th June  at £13.50 each.

The Capital Hotel will be serving the same meal the Queen had there to celebrate the Jubilee - namely seared scallops ceviche, deep fried crab & cucumber jelly; fillet of lamb in black olive crust, cumin jus & lightly spiced couscous and to finish poached pear with vanilla crème brûlée. The price is £60 per person, available at both lunch and dinner between the 1st and 10th June 2012.

Find out more about the Capital

The Jubilee weekend will see the famous chippy appropriately rename itself ‘Diamond Union’ in a nod to Her Majesty’s 60-year reign and kids will be able to eat for free. Adults can supplement their fish supper with Pimms, while kids are kept happy with a free meal of sausage, fish bites or scampi and chips with a side of baked beans, coleslaw or mushy peas with every adult meal bought.

Find out more about Golden Union

Fred Smith, whose burgers hugely impressed us at the Admiral Codrington, has joined up with Byron to create a Diamond Jubilee special ‘Chilli Queen’ green chilli cheeseburger. The limited edition special will be a 6oz hamburger, with green chilli, chipotle mayo, shredded iceberg lettuce and American cheese, served in a glazed bun. It's priced at £8.75 and available in all Byron restaurants from 3rd May – 5th June.

As well as the Queen’s 60th anniversary, it’s also Albert Roux’s - 1952 is the year Roux began his career in the kitchen. So Chris King at the Landau has recreated some of his favourite dishes with a Jubilee menu featuring dishes reflecting traditional menu items from the 1950s, straight from the recipe library of Albert and Michel Roux Jr. Sample dishes include: Soft Cotswold Legbar hen’s egg à la Reine, Gewürztraminer poached Var salmon Royale and Hereford strawberry Queen of Puddings.

Find out more about the Landau

At Roast in Borough Market, new head chef Marcus Verberne’s has come up with Diamond Jubilee Week Cook’s Specials - a trio of dishes each paired with wines from Kent-based Chapel Down Winery. To start there's coronation chicken and gem heart salad with crispy shallots (£9.75) together with a glass of Roast's exclusive Bacchus Reserve 2010 (£7.50). The suggested accompaniment for the main course of venison Wellington with McSween’s haggis and buttered hispi cabbage (£36.75) is 'Union Red' (Pinot Noir/ Pinot Precoce/ Rondo) 2009 (£8.00) and then there's queen of puddings (£7.50) – with a delicious Nectar Late Harvest NV (£7.00).

Find out more about Roast

Heston Blumenthal's pub The Hinds Head in Bray has a very special theme for Jubilee weekend. They're recreating the menu from a royal luncheon 49 years ago in 1963 when Her Majesty the Queen and Prince Philip hosted a lunch in the pub's private Royal Room. The guest-list included Princess Anne, the King of Norway and the Queens of both Denmark and Sweden. Head Chef Kevin Love has created a modern interpretation of the menu, which runs from 1-5 June. The 3 course menu features Native Lobster with Dorset Crab, White Chocolate and Caviar and Saddle and Shoulder of Cornish Lamb with Black Pudding and Sweetbreads, followed by Treacle Tart and costs £40.

Find out more about The Hind's Head

Over in West London at Le Cafe Anglais, chef Rowley Leigh has taken the theme to heart and has come up with a Jubilee Lunch menu featuring Coronation Chicken, Oeufs Pochés Elisabeth and Windsor Mess among other seasonal delights. The lunch will be available 4th - 5th June for just £25 for three courses and a glass of Kir Royale which we reckon's a bit of a bargain.

60 years ago Quaglino's celebrated the coronation with a commemorative menu, now they're doing a 2012 version of their original menu. The five course menu features foie gras terrine with port jelly, Dover sole à la royale and Assiette of strawberries with a gingerbread and liqueur biscuit and runs until Saturday 30th June. It costs £65 and includes a complimentary chocolate gift from Charbonnel et Walker. And if you happen to have tickets to the Jubilee concert on Monday you'll get a complimentary Best of British cocktail when dining for lunch.

Find out more about Quaglino's

And Republicans better head for Dalston...

Alternatively, if you're of a Republican bent, you can head to East London where Niko B Chocolates are holding an event inspired by their favourite royal, Prince. Their dessert club on 2 June at the Avo Hotel in Dalston will serve up four courses of desserts and cocktails inspired by the Purple one. And anyone who comes wearing purple, raspberry berets or diamonds and pearls will win prizes from the Chocolate Lab. The event runs from 7.30-10pm, bar open till 11.30pm. Tickets are £26.

Find out more about the Niko B Chocolates dessert supper clubs