It's that time of year again, when you can play puntastic bingo (let's see how many times the word "spooktacular" is used this year), fancy dress is an acceptable thing to have as a dress code for an event and restaurants all get a little ghoulish with their specials. So with that in mind, we've rounded up some of the best specials you'll be able to grab as Halloween approaches (with many available for delivery this year) and a few ideas for a night out too... 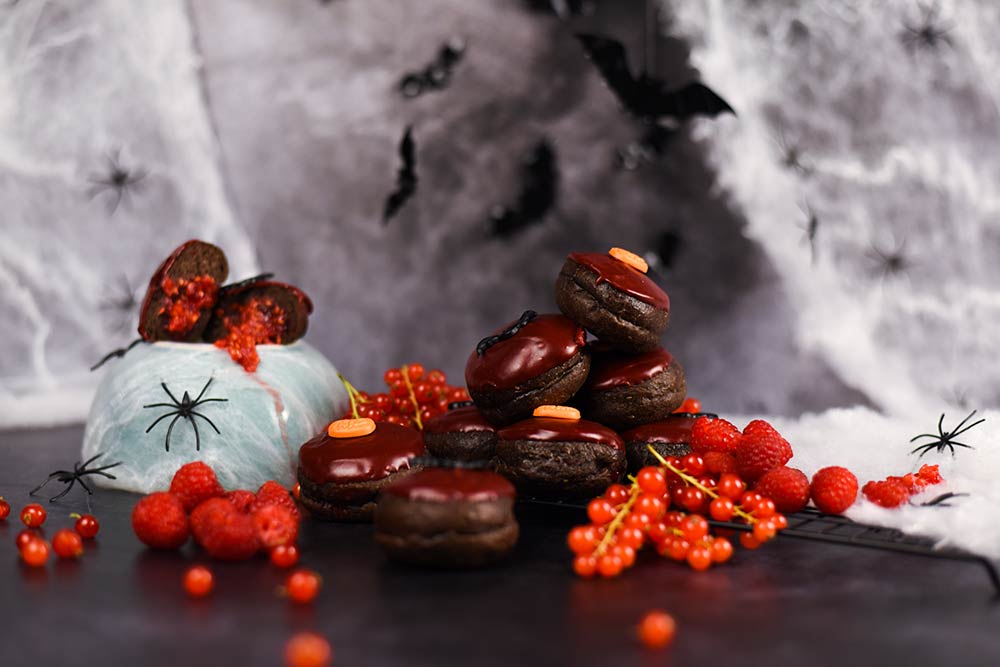 For Halloween, Crosstown have created the Halloween dough bites, made with Crosstown’s black cocoa dough, filled with homemade raspberry jam, topped with a dark berry glaze and then finished with a bat or pumpkin decoration - and they're vegan too.

Where: Any Crosstown shop or order online for delivery 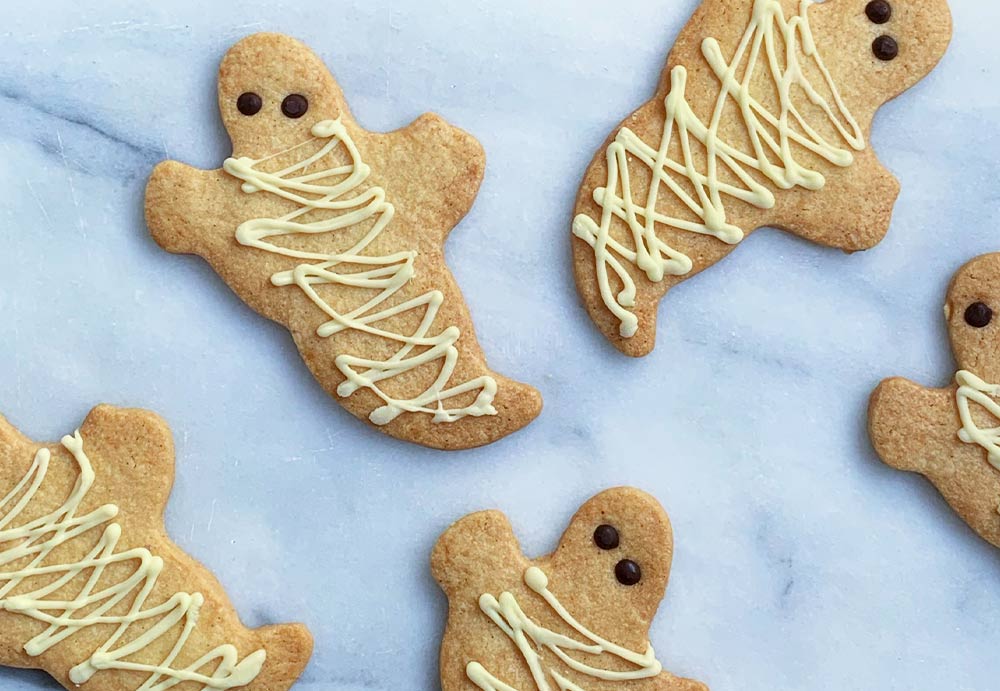 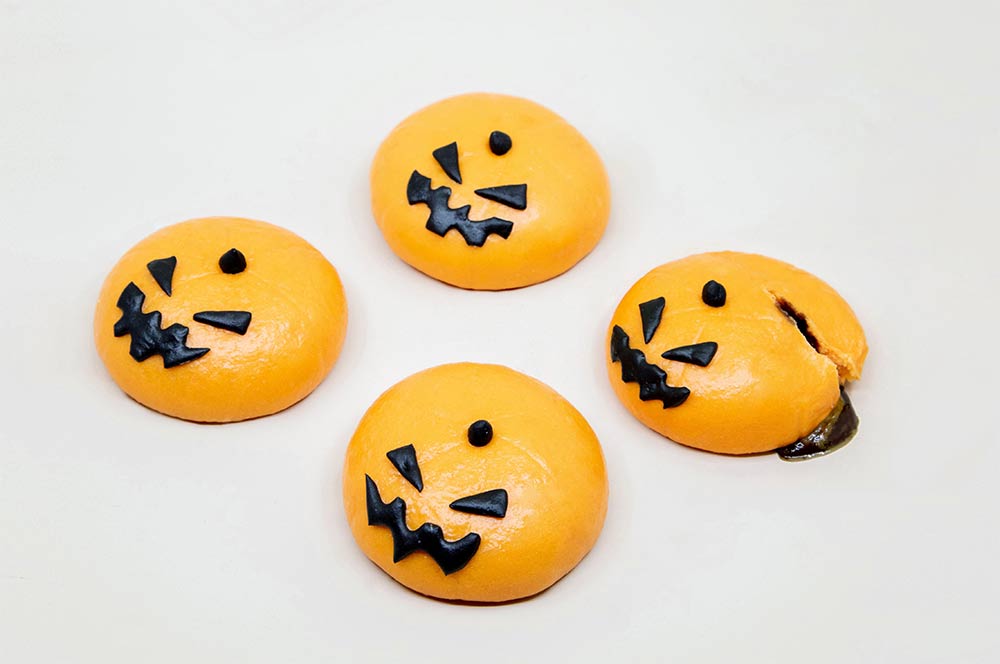 A yearly treat, the BAO pumpkin bao buns have returned. Filled with runny molten chocolate & salted egg custard you get four in a pack and can have them delivered right to your door.

When: Until they run out

The Death Metal Burger at Tommi's

Tommi's Burger Joint is serving up this burger which is a Black Angus burger patty layered with blow-torched blue cheese, grilled black pudding, shredded lettuce, Tommi’s "VOLCANO" sauce and Jalapenos, all inside a charcoal bun (and there's a vegan version too). It's apparently a team up with "extreme metal band" Calligram as part of their UK tour. From each burger,  £1 will be donated to the charity Help Musicians. 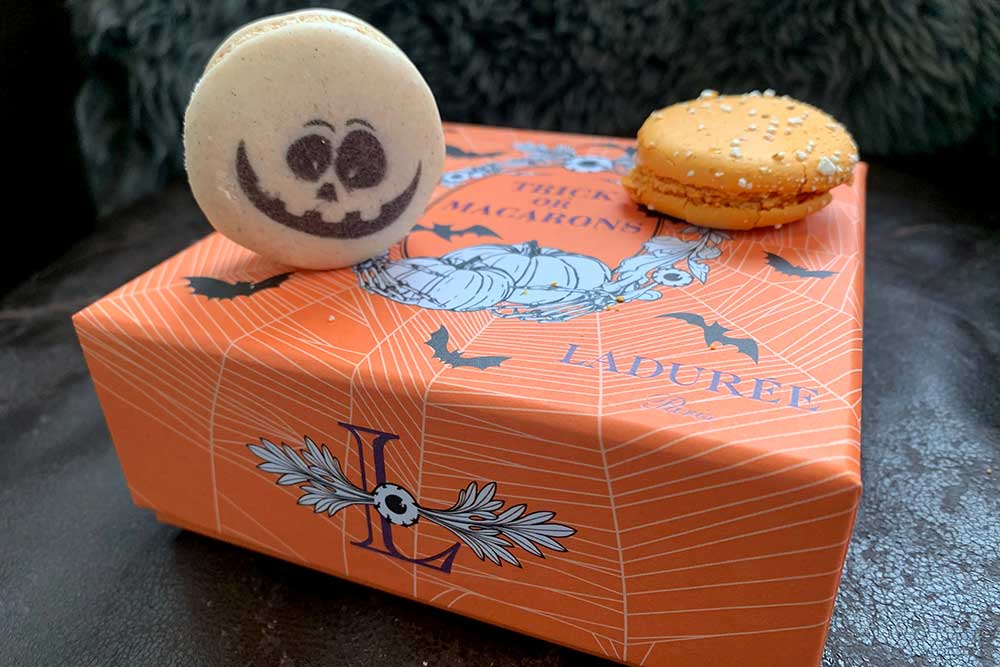 Head to Laduree for sweet treats this Halloween. Their limited edition gift box, complete with glow in the dark design, features four popcorn-flavored macarons and four spooky vanilla macarons for £25. 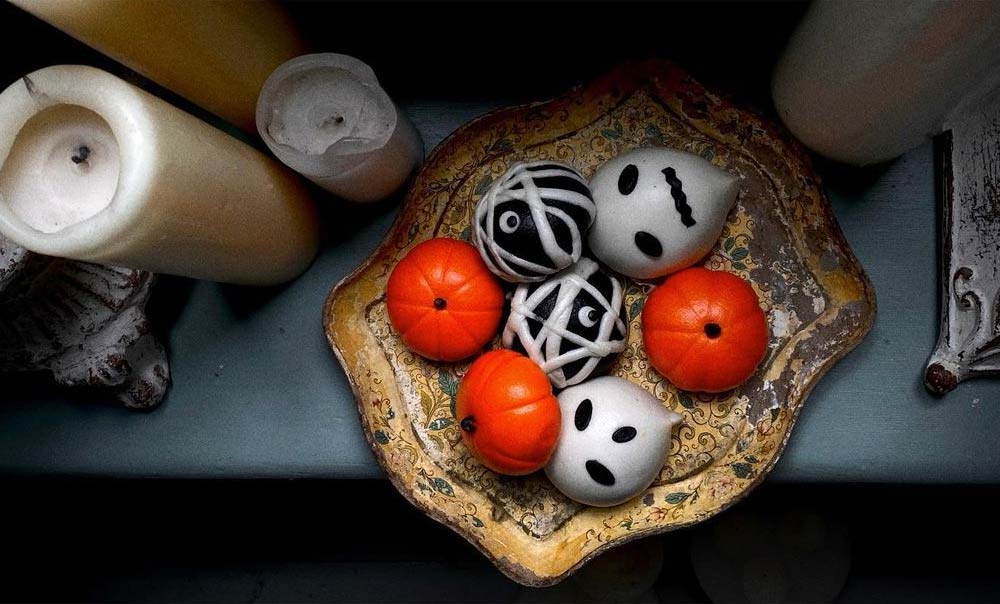 This year's special box of buns features three types of bun. There the return of the Spiced Pumpkin bun, stuffed with sweet, roasted pumpkin and peppered with star anise, cinnamon and cloves. New this year is the Mummy bun, made using roasted black sesame and tahini and the Ghost bun, which is filled with a sticky toffee custard cream.

Day of the Dead dessert at Aqua Nueva

Head to Aqua Nueva just off Regent Street for a smashing Day of the Day dessert that'll really let you release pent up energy. Made from White Chocolate and Yoghurt Mousse with Raspberry, it's a terrifying treat. 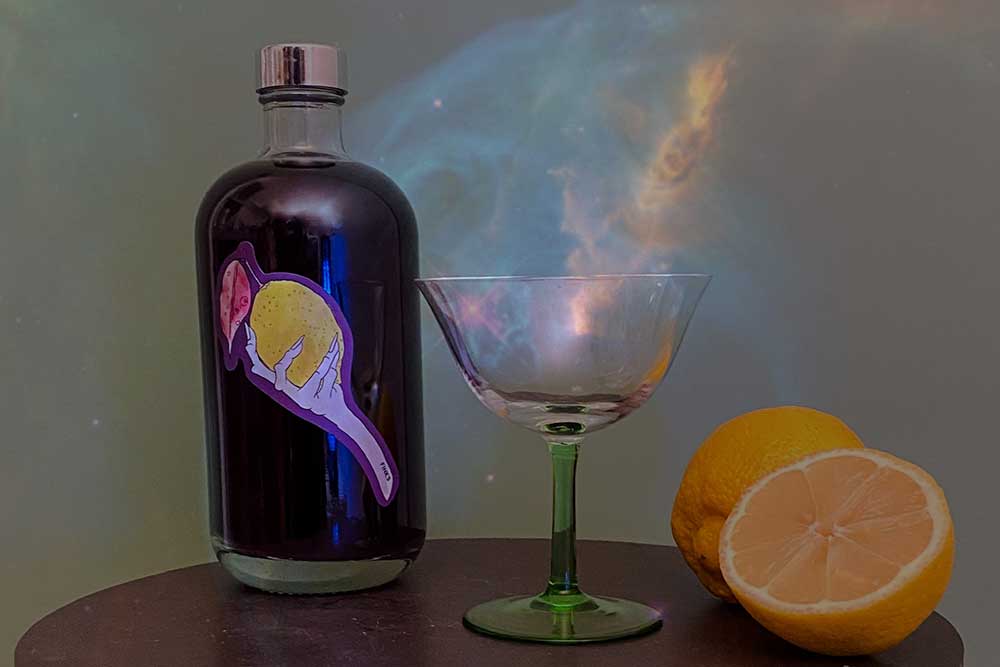 Finks in Highbury has two Halloween bottled cocktails on its shelves this Halloween. Spirit is a chocolate vodka martini but we're particularly taken by the idea of Old Sour Witch, a naturally coloured blue whisky old fashioned/whisky sour that changes from blue to pink when you squeeze in lemon. Magic!

Creams Cafe have a Crushed Bone and Blood Orange Sundae on offer 18 October – 4 November 2021 to dine in or get delivered.

MY&SANNÉ - Knightsbridge have two inventive cocktails for the Halloween period. The Munchkin Scary Spice features vodka and pumpkin puree and is topped with scorched meringue. While their Bloody Mary comes served in a blood bag. 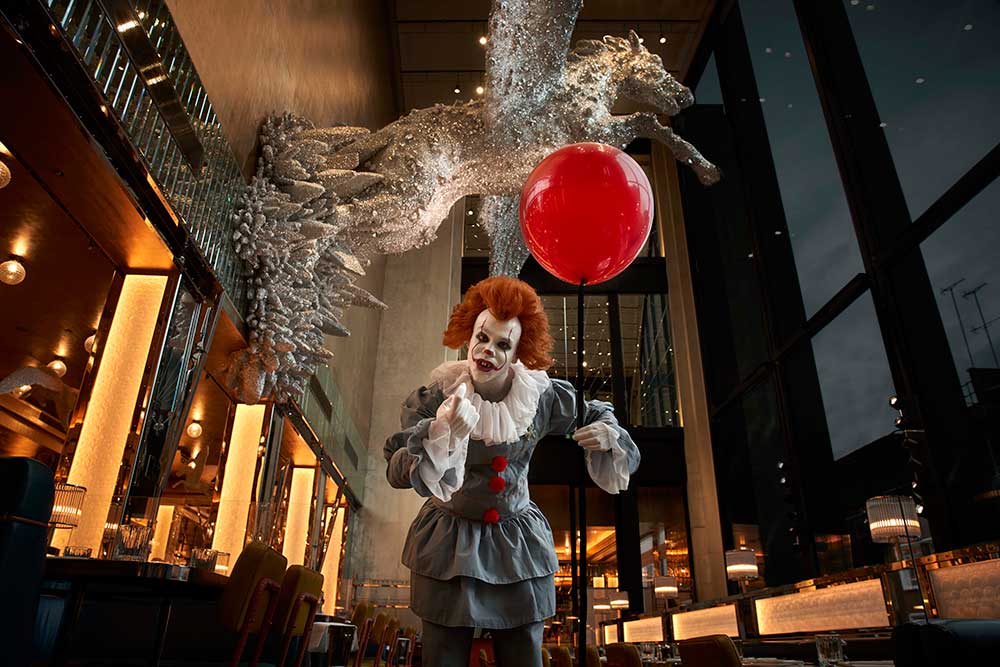 Pennywise at The Brasserie of Light

The Long Halloween at Park Row (Soho, 31 October) - The Batman restaurant has chosen a particularly relevant Batman story as the theme for its Halloween party. Dishes at the meal include The Man Who Laughs! (Beetroot cured Salmon, textures of beetroot) and Death on Hallows Eve (Roasted Beef fillet, Ironbark pumpkin). The meal is £70 per person and there's an afterparty at their newly launched Old Gotham and Poison Ivy rooms too (£20)

Homeboy (Nine Elms, 30-31 October) -  “The Hunt for the Wee Beastie” has the bar transformed into a 1950's vintage Hollywood B-movie film set, on an immersive experience as if you're part of the crew of a film, taking place from the smokey peat bogs of Islay to the lair of the Wee Beastie. There will be a special five drink menu, with drinks including the Islay 75 – Ardbeg, Lemon, Orchard Syrup and Moët. No tickets, just turn up on the night.

Balthazar (Covent Garden, 30 - 31 October) - This will be a reimagining of the Hell Café in Paris, which opened in 1892 and the ghosts of Paris’ age of jazz and cocktails will be bought back to life. The restaurant will also be adorned with a ghoulish installation, as well as offering a special "bloodcurdling" dessert, and reimaging classic cocktails.

Boxpark (Croydon, 7 November) - Every food vendor will have a Halloween special on the night, but it's the Day of the Dead event that you'll really want to go to. They've teamed up with Lucha Libre World to present a night of Mexican Lucha Libre, also known as ‘freestyle wrestling’. Tickets are free.

Discount Suit Company (Shoreditch, 31 October) - They're bringing back the Halloween Jack The Ripper Walks (£20). They kick off with a hot punch, followed by a tour of the backstreets and a table at Discount Suit Co for the evening, with 25% off drinks.

El Pastor (Soho, Borough, King's Cross, 30 October) - All of the restaurants will host Dia de Muertos parties with a free Marigold Margarita for anyone in fancy dress.

Kraken Screamfest (28-30 October) - Kraken rum is running an immersive haunted hotel experience. If you're "lucky" you'll be invited to stay the night, but should be prepared to be kept away by spooky events until at least 2am. Essentially a hotel designed to give you a terrible night's sleep. It's £10 to get in and cocktails are £5.

Shocktoberfest at Campfire (King's Cross, 30 October) - Two Tribes' Campfire is becoming a Hellish Munich Beer Hall for the night. They'll be serving up Bratwurst all night alongside their two-pint steins, filled with Oompa Lager (and £35 will give you unlimited refills for 90 mins).

Swingers (Shoreditch and West End, 29 - 31 October) - the crazy golf spaces will feature cobwebbed entrances, the ‘Trick or Treat?’ wheel of fortune for prizes and a special Trick or Treat cocktail menu will be on offer as well as zombie caddies manning the course.