Restaurants with a view - the best high-rise dining in London

We're rather taken with high rise dining and drinking here at Hot Dinners. Every once in a while it's important to rise above pavement level and look out at this great city of ours. Along with having some of the best restaurants in the world, we think London's also blessed with some of the best high-rise dining options too. Here's a run-down of some of the best out there. 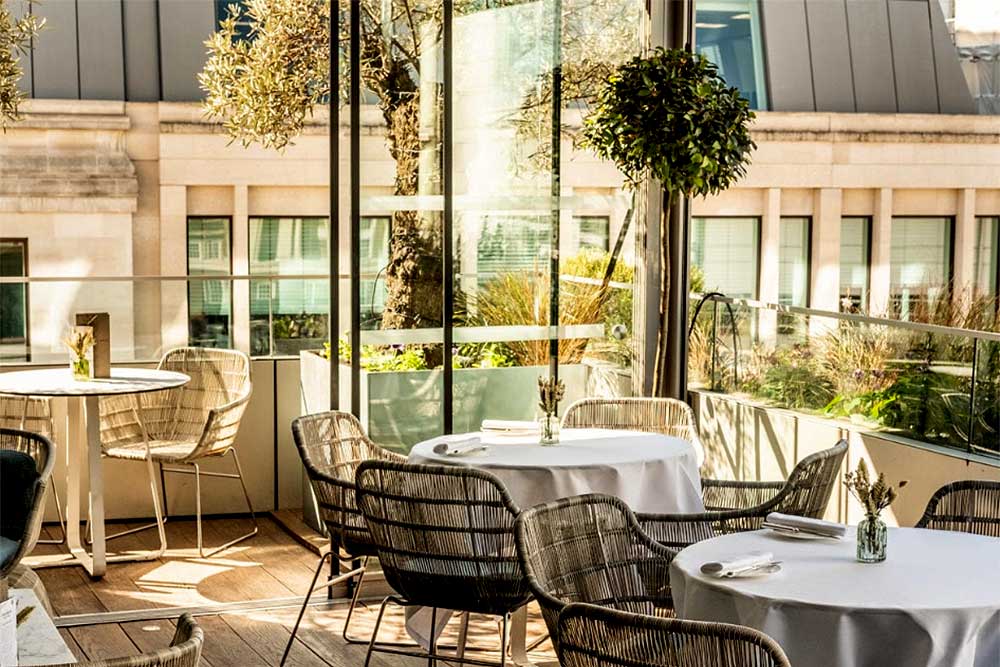 In a nutshell: Michelin-starred seafood at the top of the City's South Place

What to expect: Bang in the centre of the city, this may not be quite as high as others on the list - but there's still a great rooftop terrace at the end of this restaurant at the top of the South Place Hotel. It also gets a special mention as one of the Michelin high-rise dining experiences in the capital. Exec chef Gary Foulkes leads a high-end seafood offering here.

Find out more about Angler 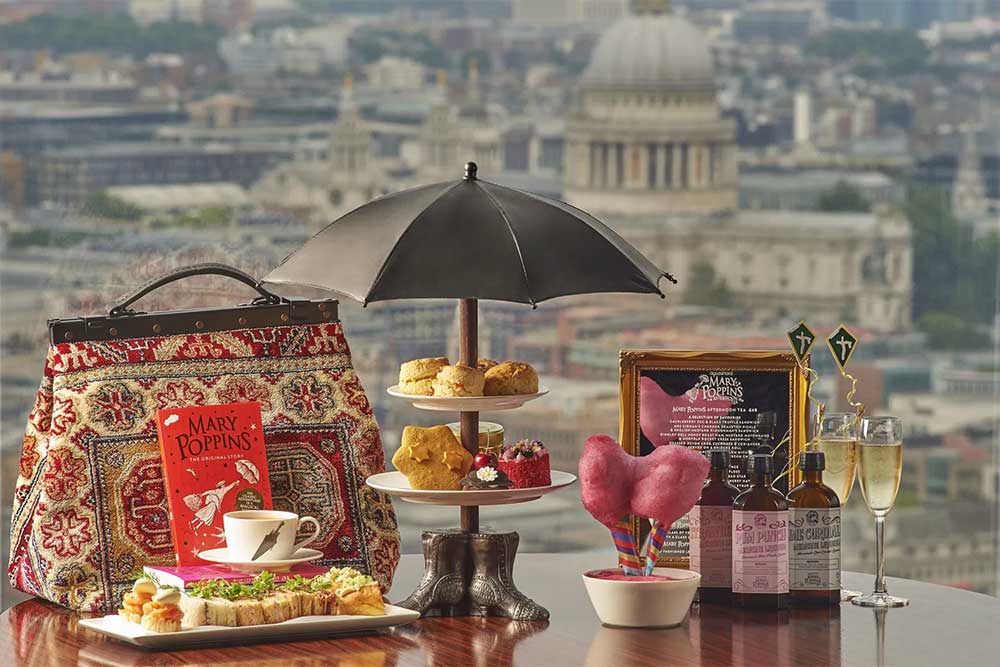 In a nutshell: High rise bar and restaurant at The Shard

What to expect: Billed as a British restaurant, the menu here definitely roams into international waters. But they do make a lot of sourcing top-class British produce such as venison from the Rhug Estate and smoked salmon from Lambton & Jackson in Maldon. The Mary Poppins afternoon tea is particularly popular.

Find out more about Aqua Shard 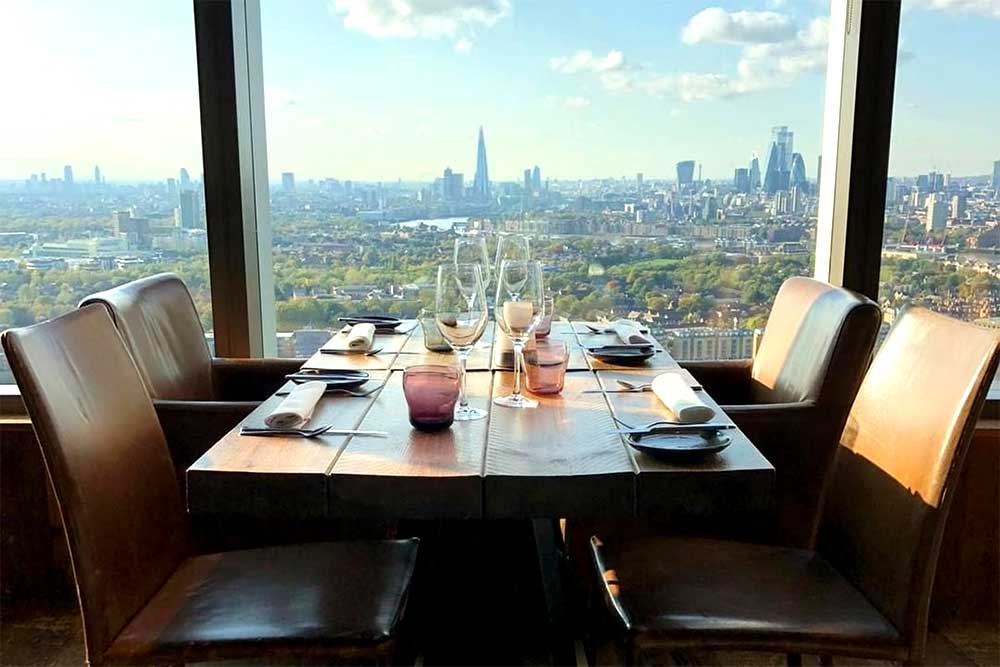 In a nutshell: Not one - but three floors overlooking Canary Wharf

What to expect: This bar and restaurant is at the top of the Novotel Canary Wharf - with the restaurants on 37, bar on 38 and terrace on 39. In charge of the food is Aurélie Altemaire, who was previously at L'Atelier de Joel Robuchon, so expect influences from his cuisine in the menu.

Find out more about Bokan 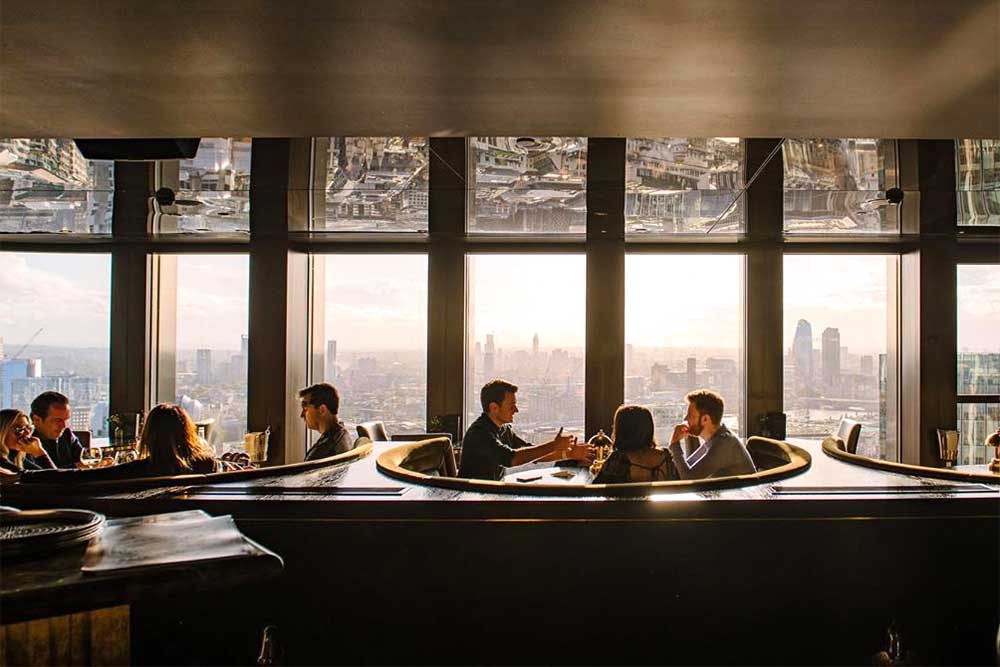 In a nutshell: Jason Atherton joins the high-rise dining scene with this spot more than halfway up Tower 42.

What to expect: Atherton's Social restaurants are known as much for the cocktails as the food, so expect a decent drink from the bar here. In the kitchen is Head Chef Paul Walsh whose team turn out creative yet simple dishes, showcasing the best of British ingredients.

Find out more about City Social 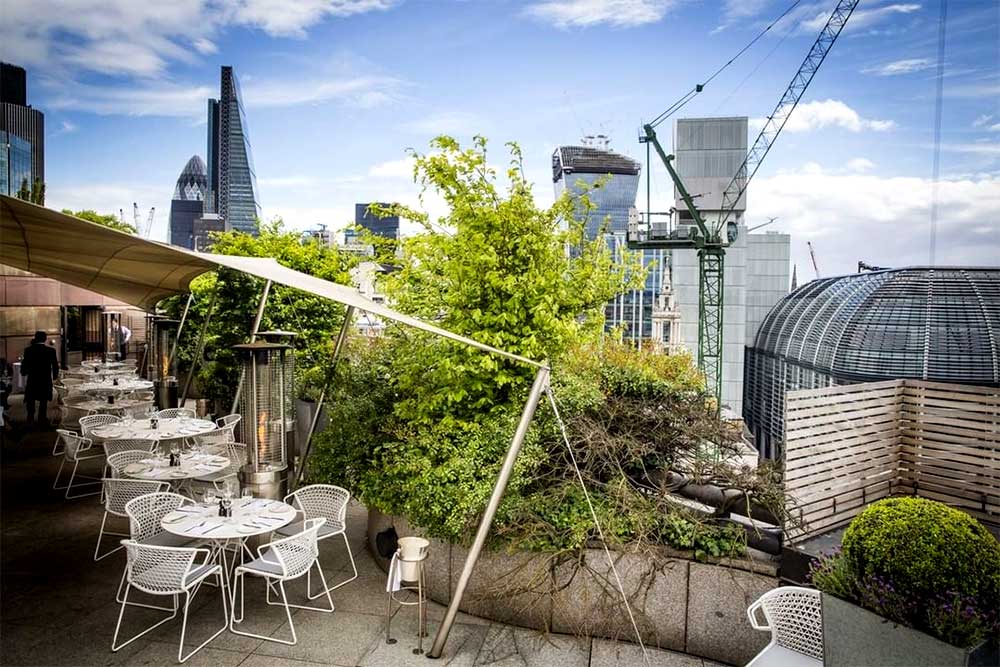 In a nutshell: City institution

What to expect: Up on the seventh floor of 1 Poultry you'll find this popular D&D restaurant and bar. To be fair, the best City vista is from their massive heated terraces. But the bar (which has its own separate menu) also has decent views too.

Find out more about Coq D'Argent 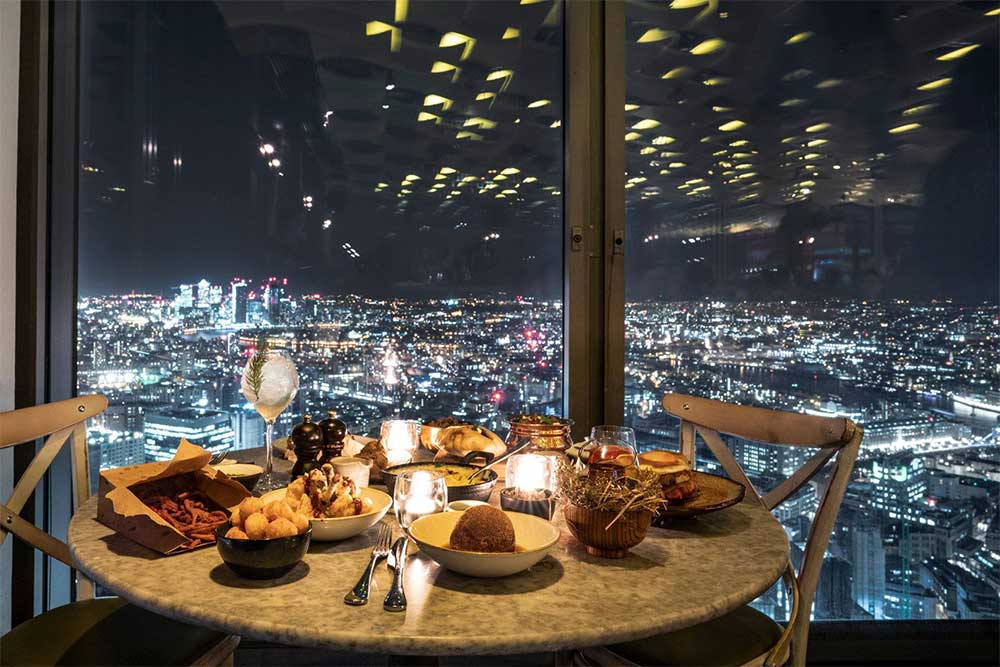 In a nutshell: 24-hour restaurant right at the top of the Heron Tower

How high? 40th Floor (with a very impressive lift ride on the way up)

What to expect: This is one of two restaurants in the Heron Tower, the other being the equally popular Sushisamba, which has a slight edge due to its outdoor terrace. Originally in charge of Duck & Waffle was Dan Doherty who was responsible for making this one of London's favourite dining destinations for its food just as much as its elevated location. Much of his creations remain on the menu. It's also open 24 hours, so worth popping in at any time for either the signature duck and waffle, or an impressive weekend brunch.

Find out more about Duck and Waffle

Also try: Downstairs from Duck and Waffle is the Japanese-Brazilian-Peruvian fusion restaurant Sushisamba - more of a party venue than Duck & Waffle. 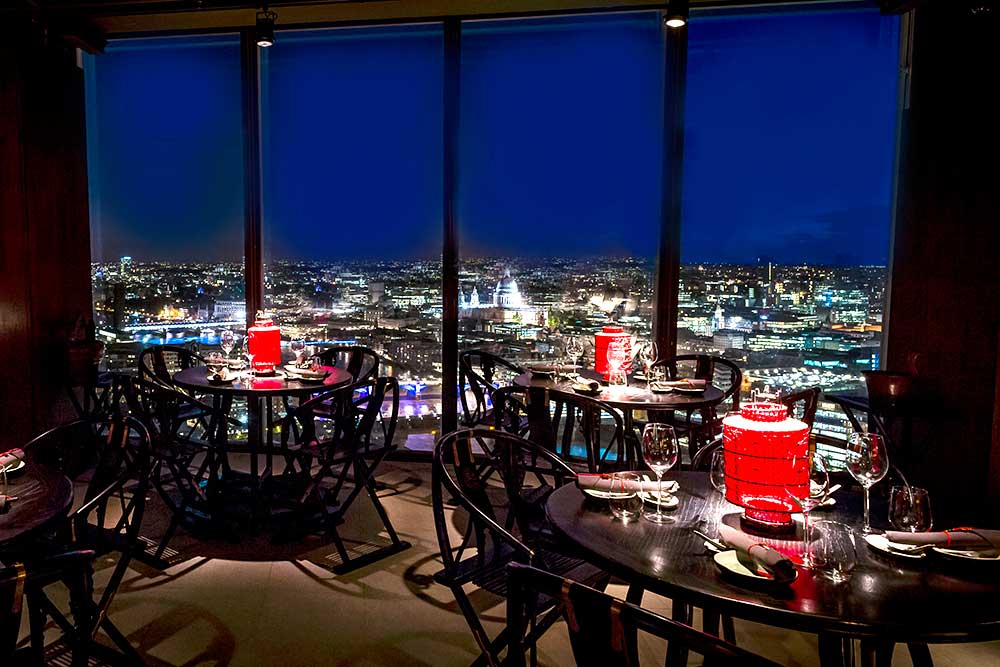 Hutong at the Shard

In a nutshell: Aqua does fiery Chinese food in the Shard

What to expect: Hutong was one of the first batch of restaurants to open in the Shard and has been the best reviewed. Expect Chinese food on the spicier side, with the soft shell crab Red Lantern dish and the whole Peking duck (carved at your table) being signature dishes. There's a bar in Hutong itself, but the one downstairs at Aqua Shard is more fun (and you can still visit if you're going to Hutong).

Find out more about Hutong

Also try: The aforementioned Aqua Shard is also available for afternoon tea if you want your tea, cake and sarnies with a view and upstairs you'll find Oblix for steaks and more. 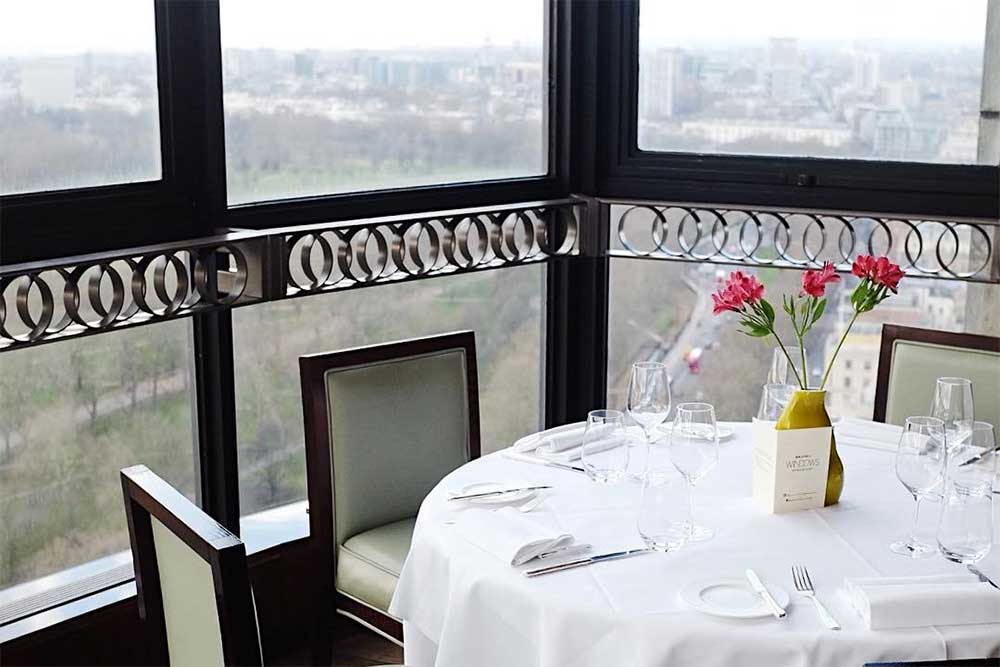 What to expect: As with Jason Atherton, the Galvins have many successful restaurants around town - but this is certainly one of the jewels in their crown. Expect classic French dishes and the best service in town courtesy of general manager and all-round front of house legend (and TV star) Fred Sirieix who is there at least once a day. A perfect restaurant for a special occasion and also well worth popping in for a drink at the bar too.

Find out more about Galvin at Windows 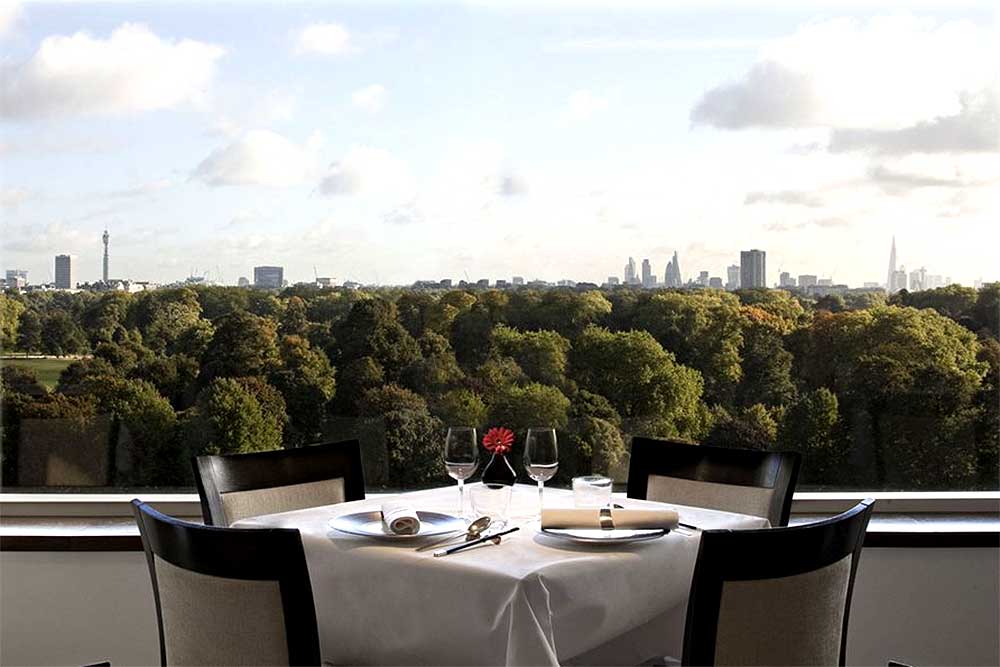 In a nutshell: Mid-rise Chinese with a great view.

Theatre menu times: With a window that stretches the length of the restaurant, Min Jiang has an incredible view of Kensington Gardens. The food at this Chinese restaurant often receives raves, particularly for the Peking Duck. If you like your sake, it's well worth popping along to one of their regular sake pairing dinners.

Find out more about Min Jiang

Here's where the restaurants with a view can be found