At a time when restaurants are closed and supermarkets have bare shelves, London's local food stores and delis are more important than ever. We show you where to pick up the essentials during lockdown. 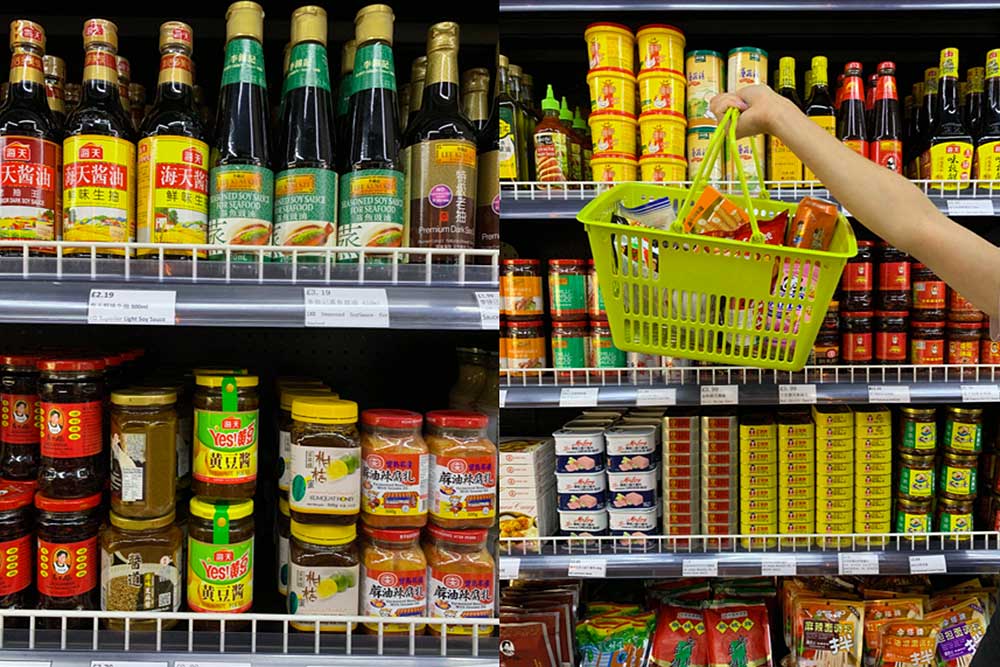 Independent Chinese retailer Bin Bin Q Supermarket (same owners as Shaanxi favourite Murger Han) stock a wide range of Asian items at their Euston store, including cooking ingredients, dried ingredients, fresh vegetables, ready made goods, frozen items, snacks and drinks. Planning your own at home hot pot? They sell everything from the burner and the butane to the stock as well as ingredients to put in there. 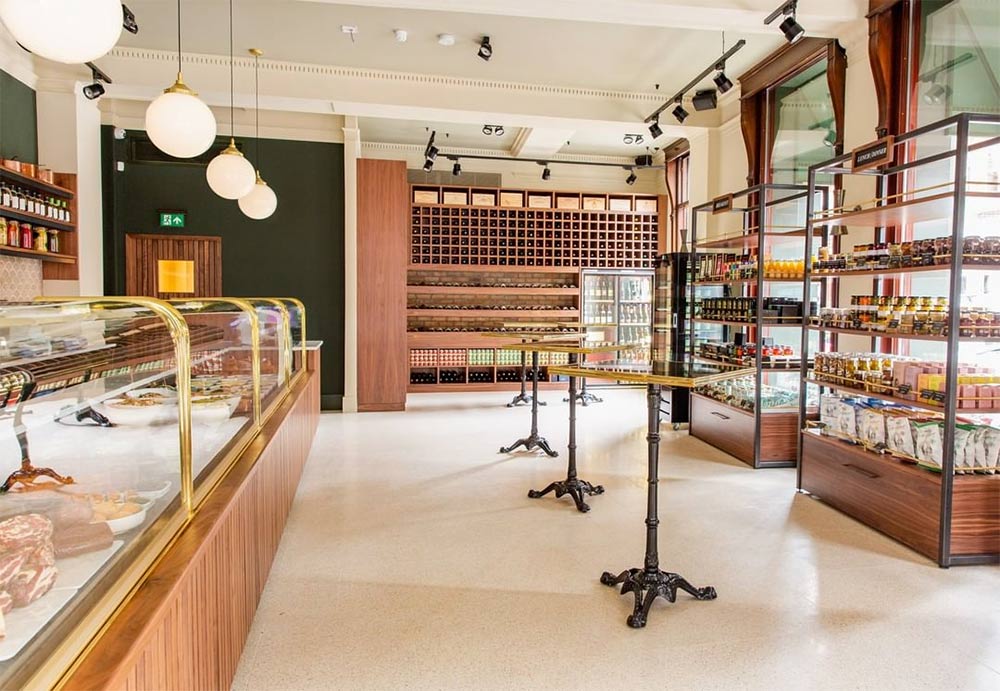 This brand new gourmet traiteur and delicatessen in Chelsea has an ex-Ritz chef in the kitchen, working up dishes to take home. Obviously, given its location, this has caviar and fresh truffles as part of its grocery section along with smoked salmon and posh chocs. But it also sells rather good scotch eggs for you to grab and go. 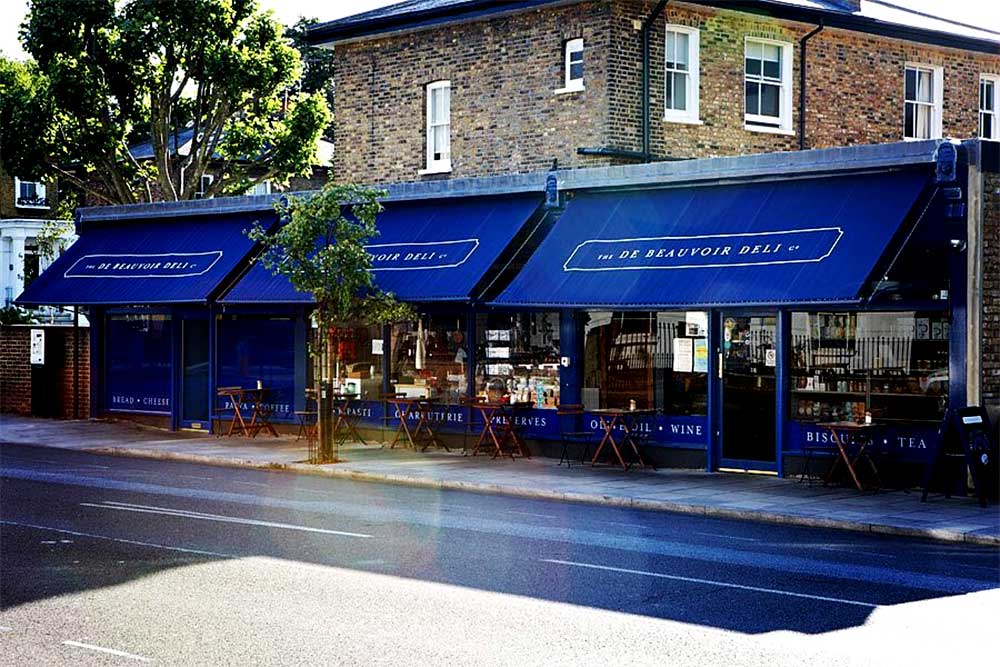 Local born boy Harry Davies is the man behind this vision of a North London deli. Not only does it serve food made on-site using produce from the deli's own kitchen garden but all the key London food names are stocked here, from Monmouth Coffee to Neal’s Yard and Brindisa and Nonna's Gelato. 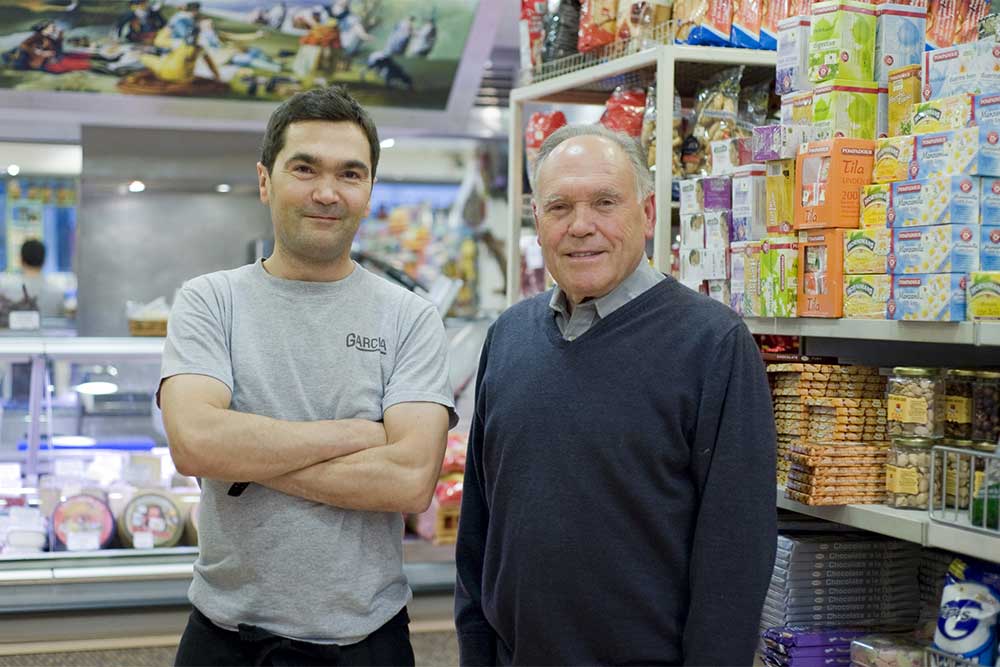 With so many Italian delis in London, it’s always nice to come across the odd Spanish one, like this longstanding Portobello resident. This family business has been around since the late 1950s, selling all manner of Spanish dried goods along with top-class jamon and cheese. So if you want to pick up your favourite Spanish crisps, paella kit or a packet of cuttlefish ink, this is the place for you. Right now their online delivery is down, having been swamped by orders - but we’re told it’ll be back up later this week.

More about R Garcia and Sons 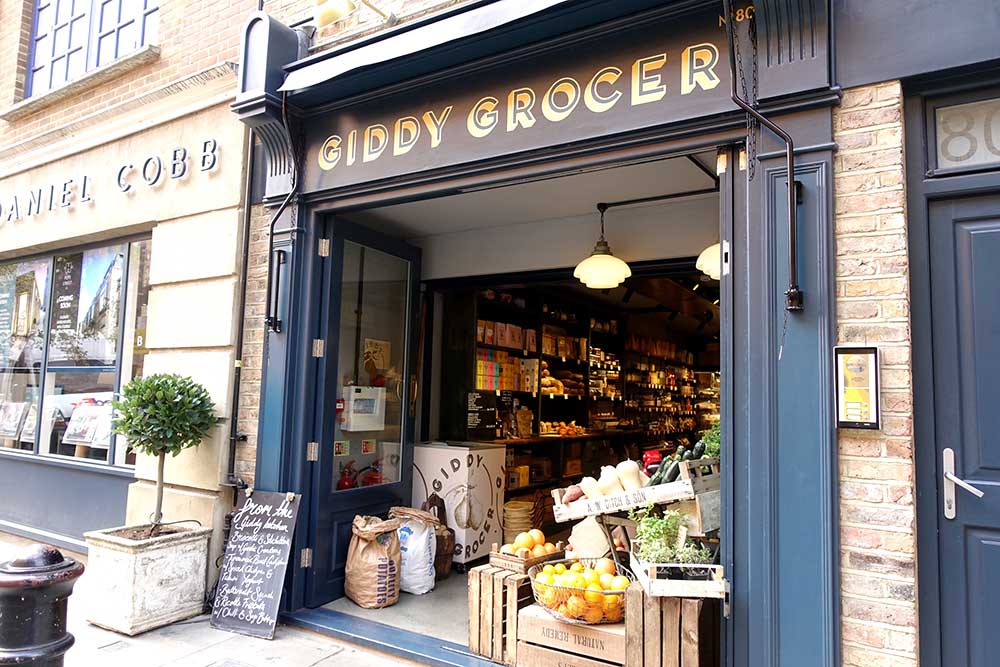 Anyone who’s survived making several series of Gordon Ramsay’s Kitchen Nightmares deserves to have a little haven to escape to. TV producer turned shopkeeper Christine Hall teamed up with fellow Bermondsey resident Simon Lyons to create this gorgeous modern grocer's. Everything from IOW tomatoes to ground coffee beans from Ealing’s, Electric Coffee can be found here along with an extensive natural wine selection and native breed meat. 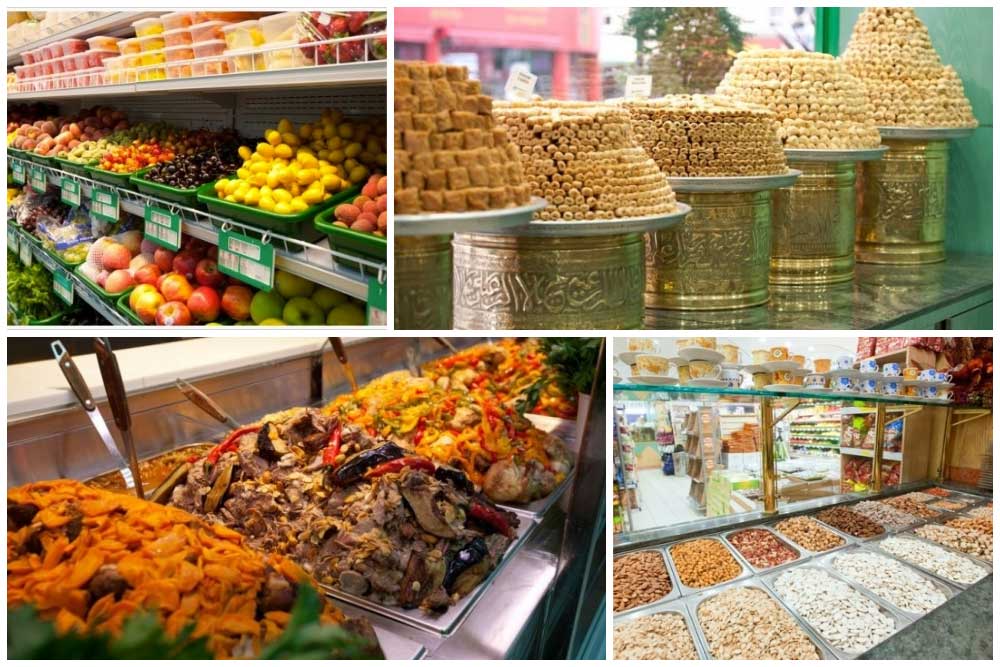 Green Valley's Middle Eastern food hall and deli landed in Marble Arch in 1986, bringing all manner of Lebanese delights to the denizens of Marylebone. There's a massive mezze counter if you want to grab lunch or dinner and go, as well as a large halal butcher section. And if you can resist picking up some baklava or kunafa while you're here, then you're stronger than us. It's also great for stocking up on herbs, spices, pulses and more. 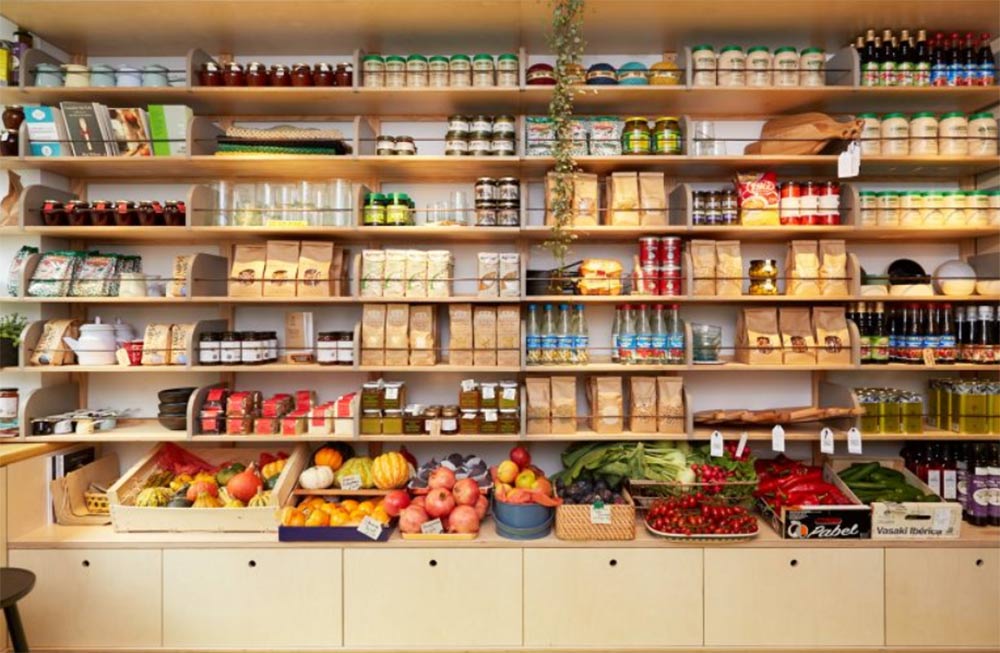 Sarit Packer and Itamar Srulovich have built a mini-empire here in Bloomsbury with their restaurants Honey & Co and Honey & Smoke and this food shop. At lunchtimes, queues are out the door for their gorgeous Middle Eastern salads and hot dishes and you can also pick up tubs of their amazing hummus and fresh flatbreads too. The cake selection is impossible to ignore and they also sell a lot of spices if you want to cook something from their cookbooks. 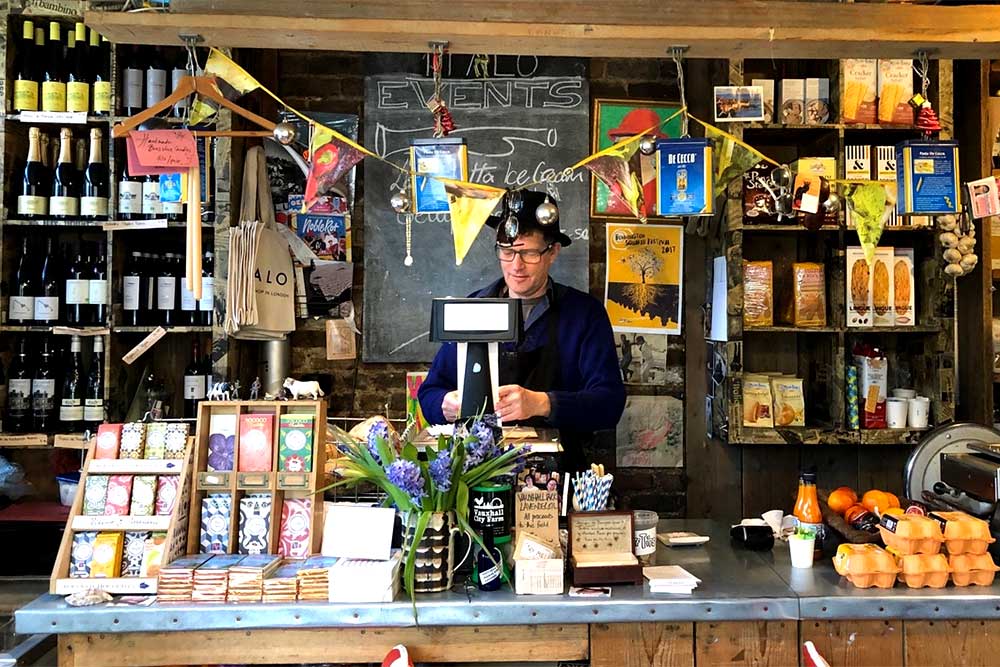 This gorgeous corner store is run by Luigi di Lieto (scion of a deli dynasty) and Charlie Boxer (son to legendary food writer Arabellla Boxer - he's also dad to chef Jackson and bar owner Frank). You'll find gorgeous dishes cooked up by Luigi like a Nduja, sweet onions & ricotta omelette or pork and pancetta ragu, paccheri. But it's also a genuinely useful place to pick up fresh fruit and veg too. 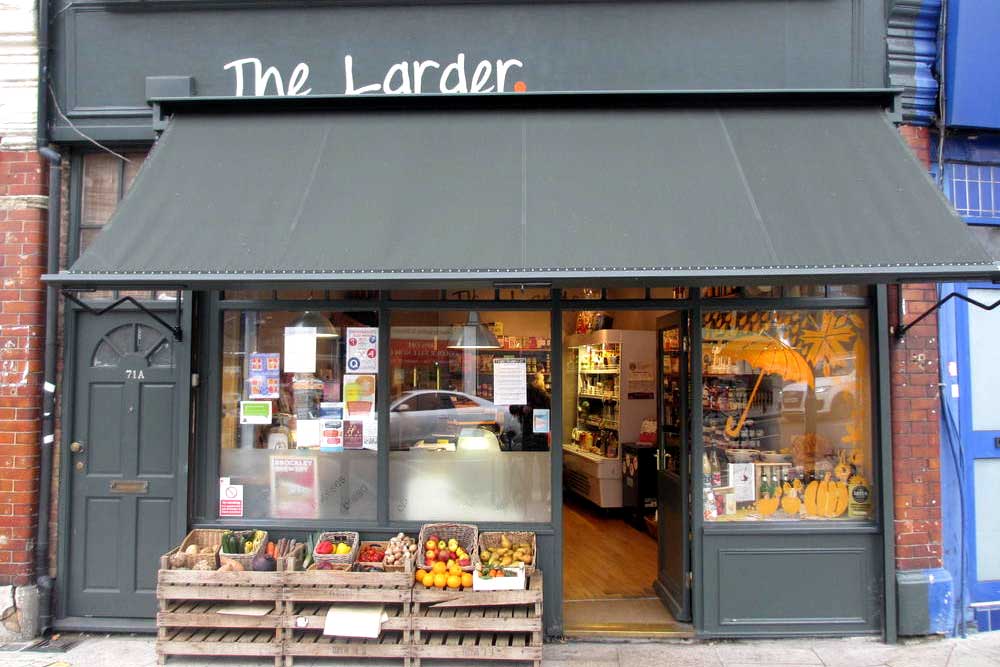 Set up in 2014 by two locals who met on the school run, the Larder is all about championing local food. To that end, you'll find over 20 locally produced craft beers on offer here alongside bread from nearby bakeries as well as fruit, veg and salad from just-down-the-A20 Kent.

More about The Larder 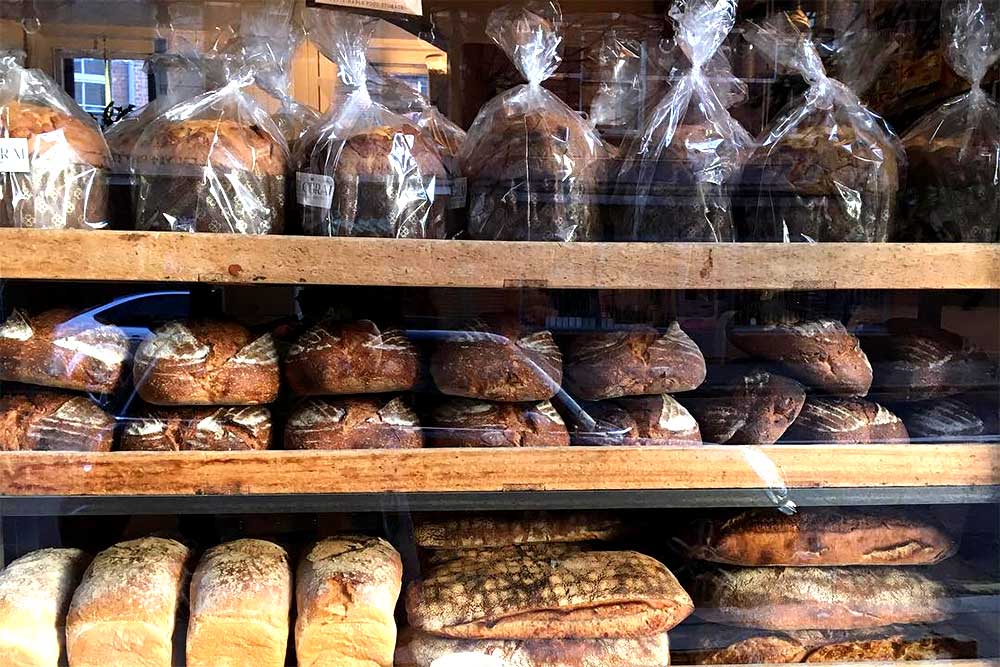 There's been a greengrocer on this spot on Shoreditch's Calvert Avenue since 1900. Leila McAlister, its current owner, took it over in 2002 heralding the revival of Shoreditch as a foodie hub. Here you can buy bread from St John Bakery, the best chocolate truffles, knobbly quince in season, or just sit in the cafe for fried eggs and sage on toast. 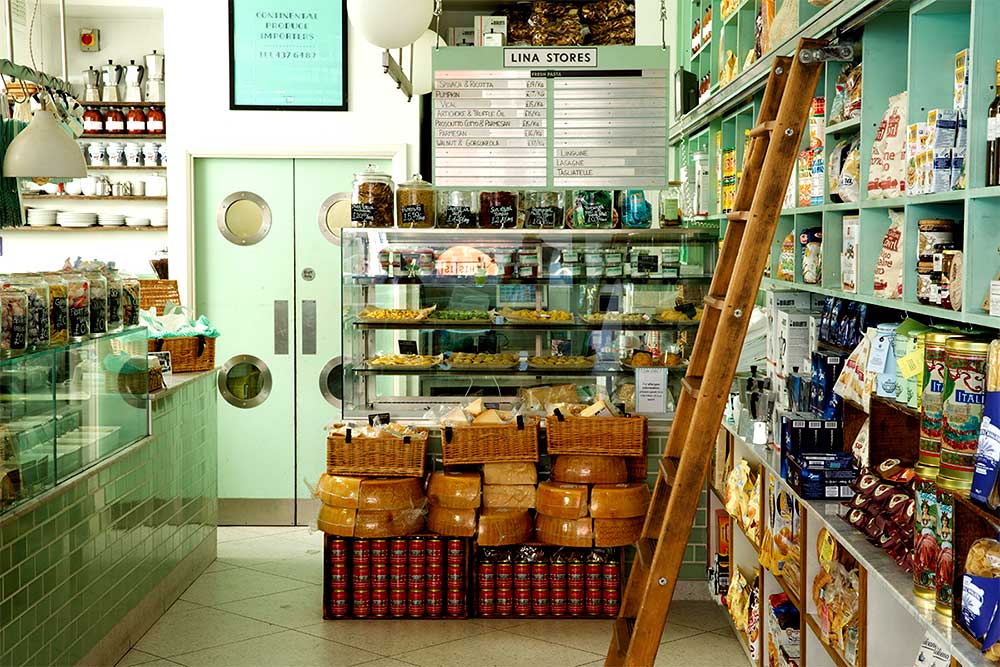 The past few years have seen the folk at Lina Stores opening their first restaurant, swiftly followed by a second in King’s Cross. But everyone’s first real love is their Brewer Street shop which first opened during WWII and is where they make swoonsome sandwiches, serve super pasta to go and where you can blow your salary on fine salumi and formaggi. There's also a deli at their King's Cross branch. 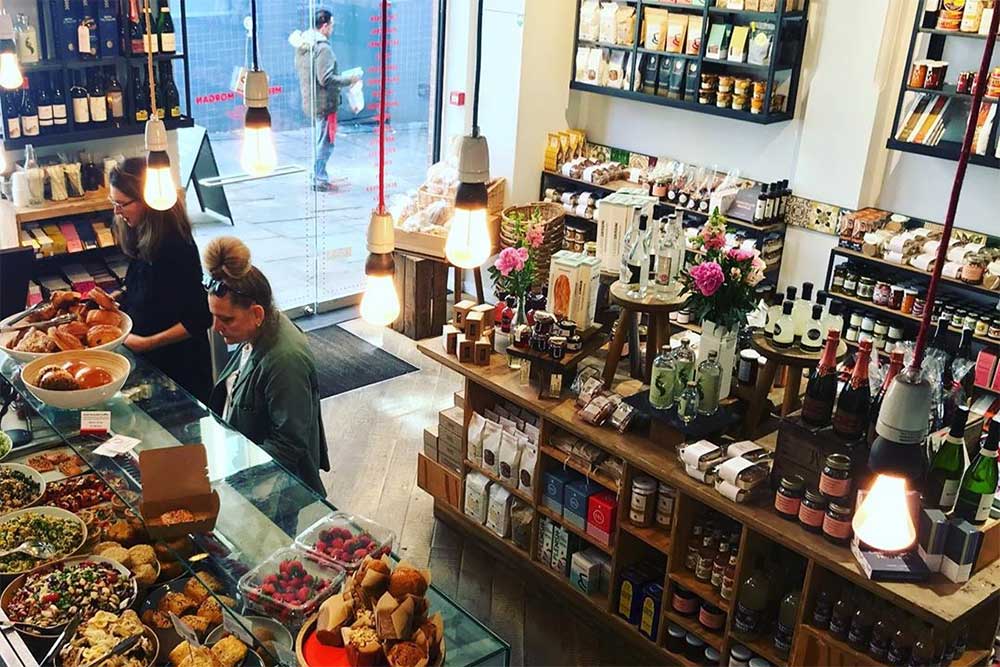 There's a distinct seasonal focus to what's on the shelves at these two North London food stores. Owners Nick and Ian were inspired by Borough Market to set up their own modern grocers. They big up artisan producers but also produce much of what they sell in their own kitchens.  So you can find anything from their own Parmesan and poppy seed rounds to Pump Street sourdough and sea salt chocolate.

More about Melrose and Morgan 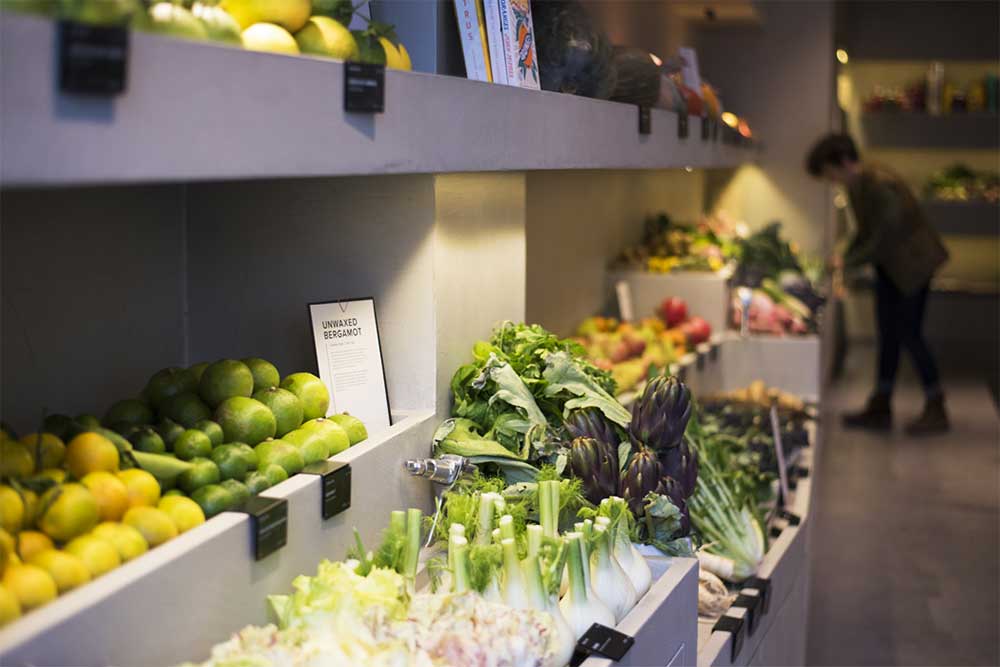 This groundbreaking grocers, that also supplies to the UK’s leading chefs and restaurants, now has five shops around town where you’ll be torn between wanting to Instagram or eat the photo-shoot ready produce on sale. The Pavilion Road store in Chelsea is their flagship where you can pick up the best seasonal fruit and veg. They’re almost too beautiful to eat. Almost. 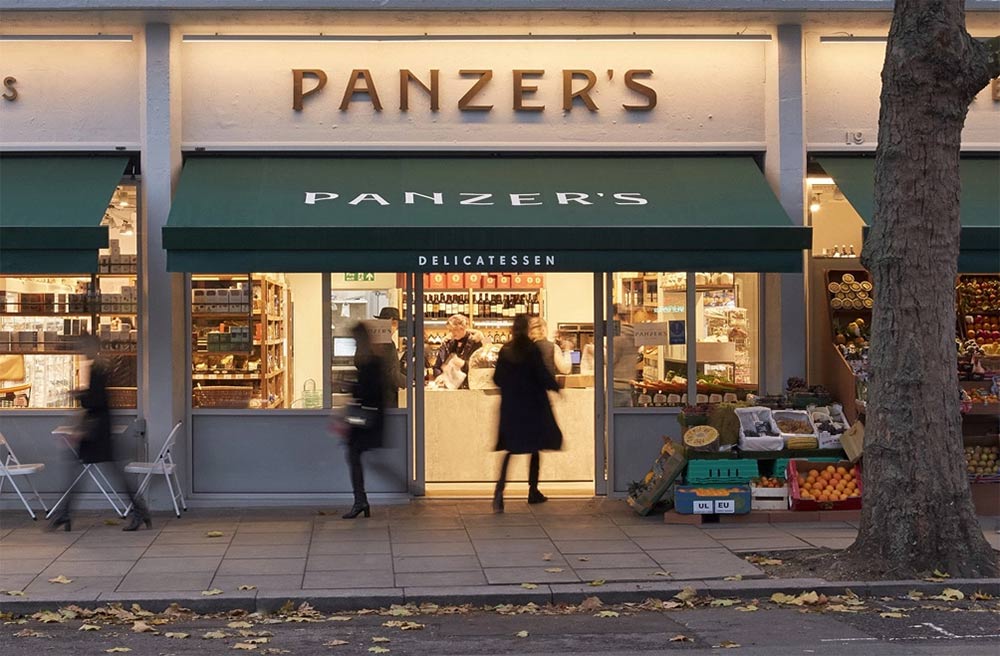 This German-Jewish deli has been serving up bagels and smoked salmon in St John's Wood since 1943. More recently it was bought up by David Josephs who was a longstanding customer there and wanted to bring it back to its former glory. He did that so successfully he now has the likes of Nigella Lawson, Giles Coren and Yotam Ottolenghi shopping there. Of course, this shouldn't be a surprise to anyone who lives in Stoke Newington where Joseph’s Newington Green grocer is one of North London's best place to buy fresh fruit & veg. 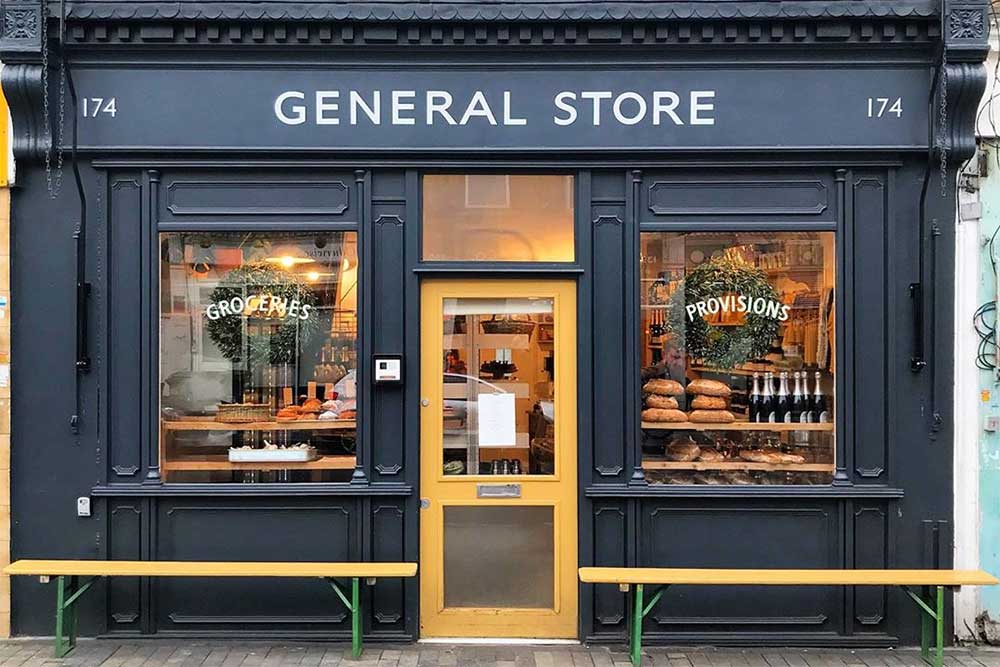 If you're looking to replenish your store cupboard with treats to get you through the coming months, then Peckham's General Store should be on your radar. From Koeze peanut butter to Catalan saffron via Festoni pasta, they'll provide you with A-grade must-haves. They also sell the lardy buns from Flor on a Saturday so you've literally no reason not to go there this weekend. 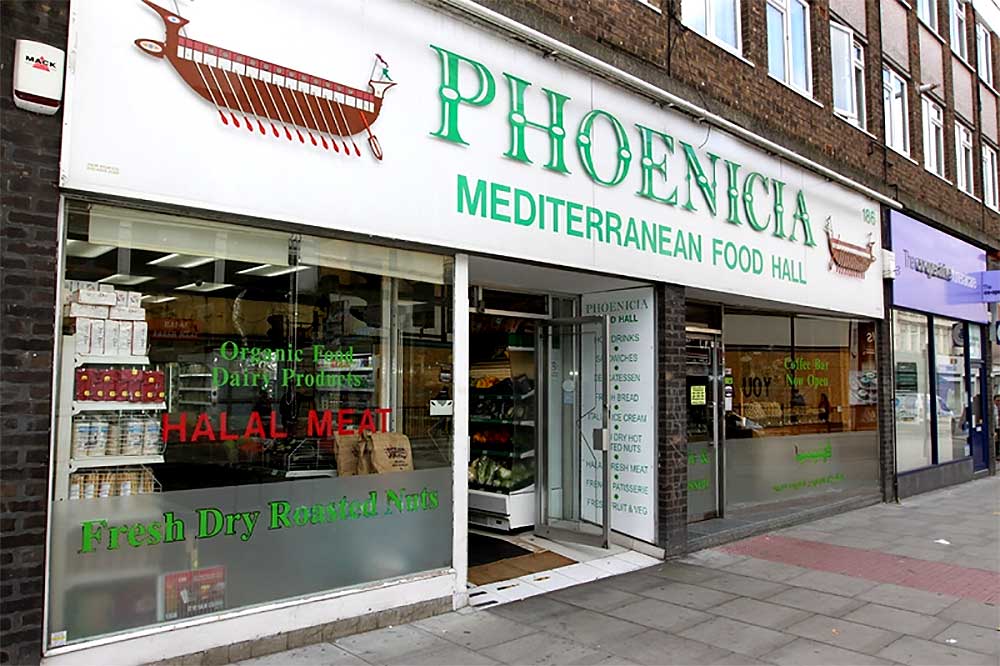 This old-school food hall may look a little tatty from the outside, but inside you’ll find a veritable panoply of Mediterranean foods on offer. Food God Ottolenghi describes it best as “a kind of a Middle Eastern, Mediterranean, North African supermarket where you can get anything you need in the department of exotic ingredients.” So if you’re after some merguez or maybe some hard to find spice, then here’s where to head. 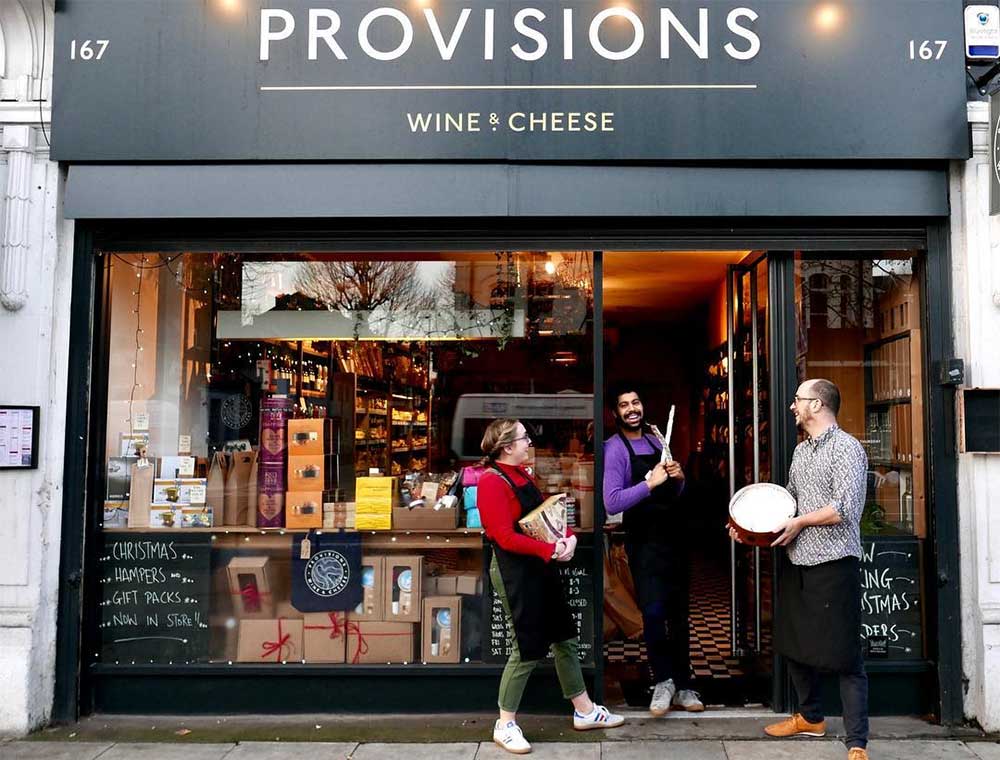 A personal favourite of ours, this Holloway Road cheese shop has the most amazing selection of mainly French and Italian cheeses and pate, along with bread from Dusty Knuckle, supplying everything you’d need for a working-from-home lunch par excellence. After work, slide into their wine and beer section for some lesser-known gems. 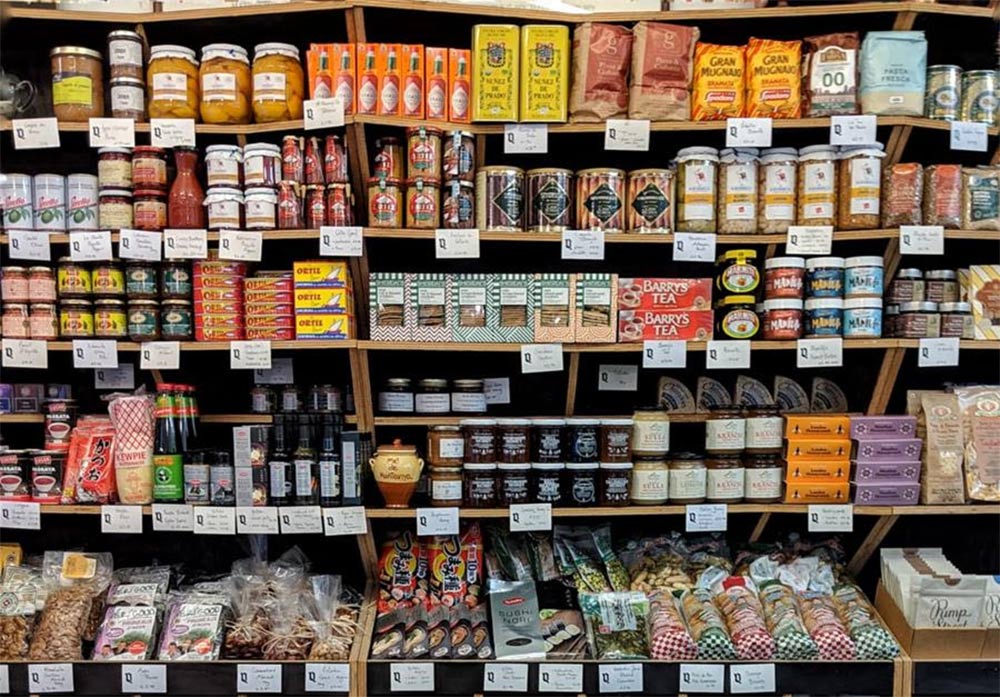 Over the years, we’ve personally blown an unseemly amount of money on the pork pies here. And the fondant potatoes, and the taramsalata - the list goes on.  Meat is butchered and aged on-site, so if you’re after a great steak you’re in the right place. Plus, the wine selection here is top-drawer. 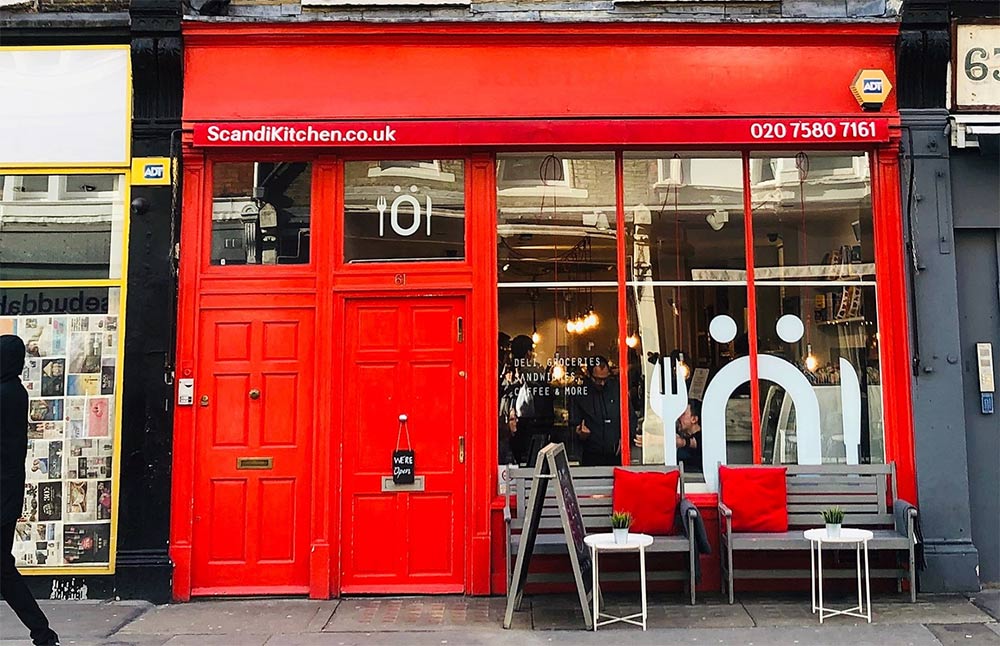 What's a Danish/Swedish couple to do when they can't find their favourite Scandi treats in London? Set up a shop/cafe of course. Bronte and Jonas pride themselves on having an extensive collection of groceries from Sweden, Norway, Denmark and Finland. So whether you're after a Fika Bundle of coffee and cinnamon buns, an open sandwich or salty liquorice you should be able to find it here. 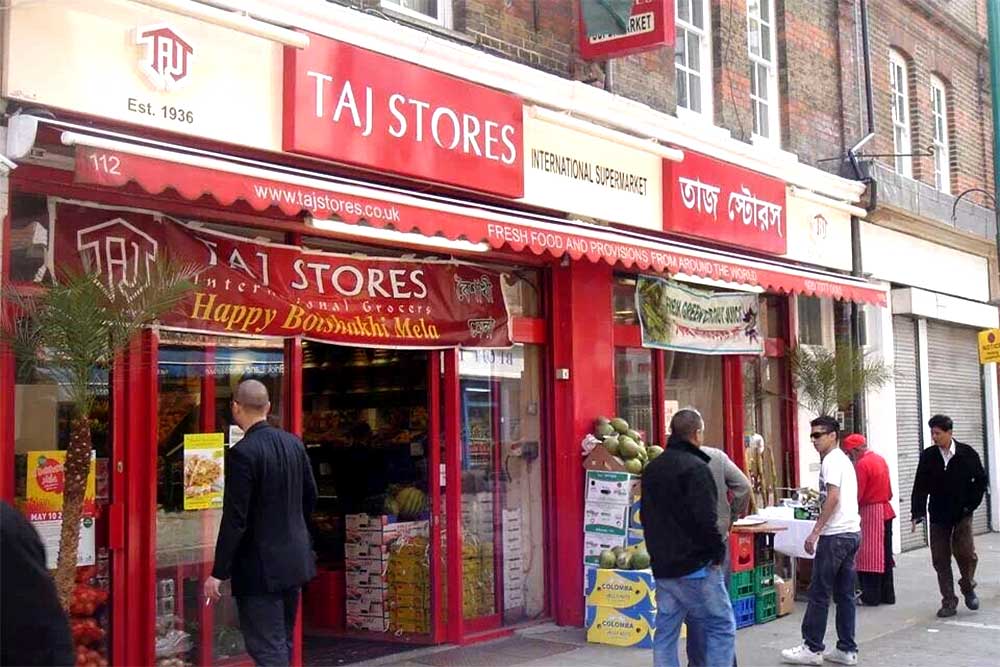 This Indian, Pakistani and Bangladeshi supermarket has been around for years. Founder Abdul Jabbar opened the doors to the original store back in 1936 and the shop remains in the same family. There's a butcher on-site and if you're after spices, pulses or other hard to find fruit and veg then this is a must-visit. It's also great for picking up kitchen equipment too. 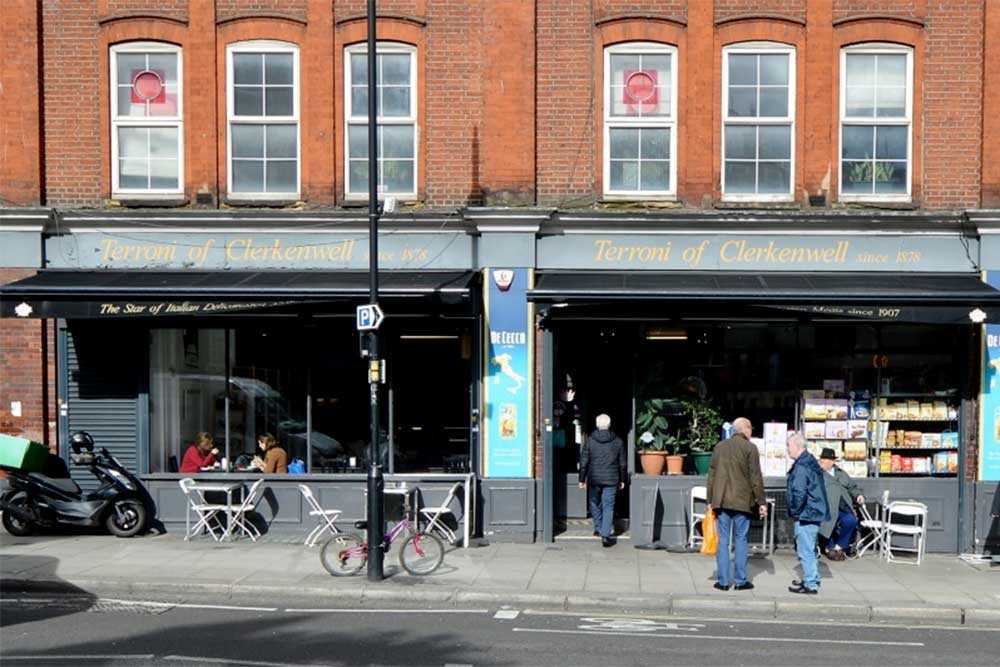 According to The Londonist, this Clerkenwell classic is London’s oldest deli, having opened back when Queen Victoria was still on the throne. As a mainstay of Little Italy, it was grissini at dawn when it shut for a period in the early 2000s. But now it’s back, selling all manner of top quality Italian produce, so if everywhere around you is all out of pasta, this is unlikely to be. 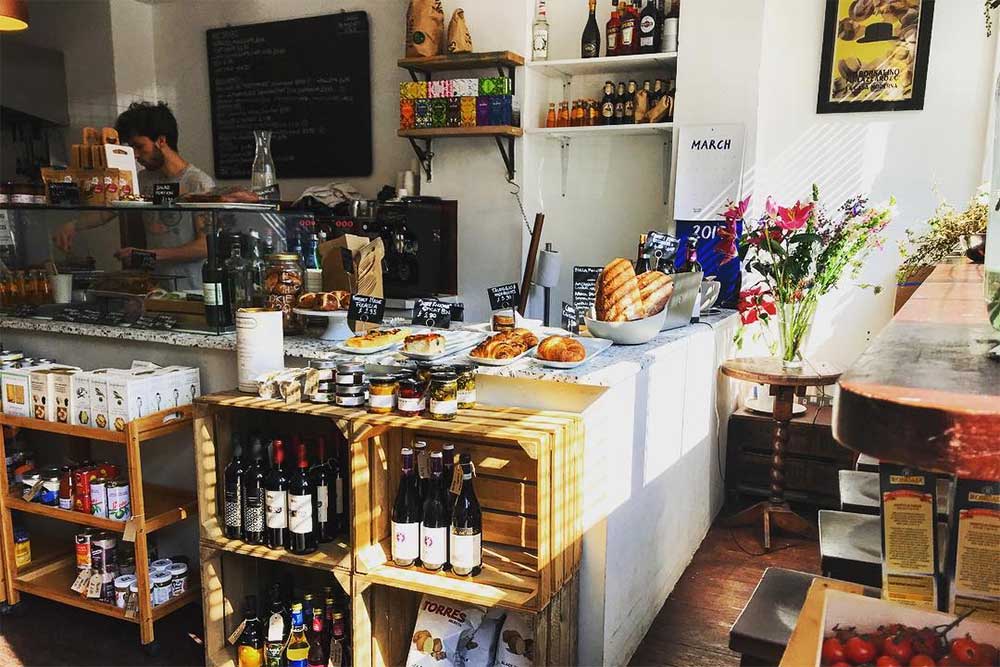 Just opposite Pidgin restaurant, the Wilton Way Deli was the brainchild of Francesca D'Agostino who arrived at shopkeeping via working for Pret, EAT, Itsu and then Ottolenghi. You could easily find yourself popping in here for a custard croissant and wandering out, some time later, arms heavy with the best risotto rice, fresh pasta and amazing wines.