10 things to do at London Restaurant Festival 2011 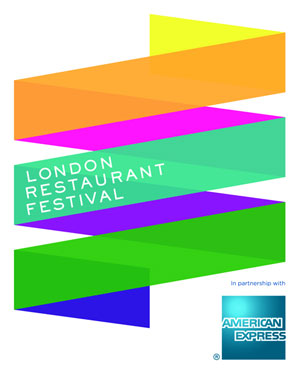 The London Restaurant Festival 2011 is just around the corner running from 3-17 October. To help you make the most of it, we've put together our list of some of the top things to try...

Hot Dinners have always been partial to a food crawl, and this year the London Restaurant Festival are organising one for you. Based around Soho, and backed by Wines from Rioja you can roam around the area taking your pick of the local tapas. You'll be given a special tapas passport that lets you stamp it at any of these venues PIX, Iberica, Fernandez and Wells, Brindisa and Copita. Tickets are £50.

One of the highlights of last year's London Restaurant Festival was 10-10-10, when chefs from outside London paired with London's best at restaurants all over town. This year a host of top chefs, including Sat Bains, Shaun Hill and Nathan Outlaw will take over Fortnums with specially prepared menus for lunch and dinner.

Throughout the festival there'll be smaller events going on at restaurants across town as everyone tries to make the most of all the good publicity. Happily the festival website will be gathering these together in their Side Orders section, so you can see what's going on in your neck of the wood.

Run by Kofler & Kompanie, pioneers behind European pop-up restaurant Pret a Diner, The Minotaur will mix fashion with art and food, transforming the tunnels below the Old Vic into a "labyrinthine gallery of cutting-edge artwork and film" with a world-class restaurant and lounge-bar. The chefs taking part are London's own Nuno Mendes of Viajante, Matthias Schmidt (Villa Merton, Frankfurt) and Juan Amador, (Amador, Mannheim).

This one's exclusively for American Express cardholders (Amex sponsors the festival) and features five of London's biggest chefs reinterpreting some of Britain's favourite dishes.  Among other dishes, Angela Hartnett takes on Black Forest Gateaux, Vivek Singh will do Scotch Egg, Nuno Mendes tackles the prawn cocktail and Bruno Loubet turns his attention to the Lancashire hotpot.

Each year, the festival puts on various Gourmet Odyssey tours, where diners are bussed around areas of London to try out different restaurants for starter, mains and dessert. This year, they're adding walking tours of Clerkenwell or Covent Garden with the opportunity to try out Bistrot Bruno Loubet, Terroirs and Les Deux Salons among others.  We've also got a competition running to win a couple of tickets.

Last year the foodies taking part in the LRF's Big Debate wondered whether French cuisine was a spent force and this year the subject is "There Is No Such Thing As Ethnic Food".  A.A Gill, Jonathan Meades, Clarissa Dickson Wright and Hardeep Singh will be kept in order by Kirsty Young at King's Place. Tickets are £22.50 and include a glass of Rioja and canapes.

One of the mainstays of the Festival are the festival menus where restaurants create special introduction menus at £15, £20 and £25. After all this is all about getting people excited about eating out in London. We love the idea of the Hawksmoor Seven Dials bridging drinks and food menu at £20 per person featuring Mini Chilli-Cheese Dog, Mini Lobster roll and Chocolate Brownie, Truffle & Cookie with a set number of drinks. Restaurants getting involved range from Launceston Place to Caravan on Exmouth Market.

Eat Film is a regular event for the London Restaurant Festival, where a food-related movie is matched up with a dinner. This year they're joining up with cookery writers Bill Granger, Laura Santtini and Lucas Hollweg, getting them to help match some of their favourite films with an accompanying three course meal.

Young's Pubs 180th birthday coincides with the LRF and on 4th October, 30 pubs across London and the South East (including bloggers' favourite drinking hole the Ship in Wandsworth) will be taking part in a huge pub quiz, with questions set by festival organiser Fay Maschler. For everyone who enters the quiz, £2 will also be donated to Help for Heroes.

For more details on the London Restaurant Festival, visit the official site.