What London's restaurant folk are up to this Christmas 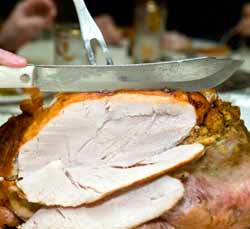 For most of us, Christmas day is a day fraught with worry over producing 'the big meal of the year' combined with the invariable wranglings in the kitchen as everyone either tries to avoid helping out or engages in devious power struggles over who'll be head chef and who'll be left peeling the mountains of sprouts. But what happens when you spend all year round in the kitchen? Or running a restaurant? Hot Dinners asked some of London's high profile restaurant folk how they'd be spending Christmas Day.

"I always do the cooking. Every year we cook a different animal. I’m running out of animals! We’ve done the goose, pig, turkey and gamebirds – last year we dragged a suckling pig up from Montreal to a chalet where we stayed for Christmas."

Read our interview with Bjorn

"My Christmas day will be getting up with my family and children, having a little breakfast, opening presents and then I go to work. I spend the day in the restaurant. My wife and children and her parents will be there at the restaurant. This year I’m going to be opening the restaurant from midday through to six-o’clock, because last year lunch ran into dinner. So I’m just going to do one nice, long sitting with a very long lunch going through to the evening. So it’ll be a long afternoon and hopefully I’ll get home later and have a bite to eat with the family in the evening."

Read our interview with Marcus

Oliver Peyton - Proprietor National Dining Rooms, The Lawn and Inn the Park
My favourite time to eat in Britain is autumn/winter – that’s when the land is producing its best stuff. It’s easy to make Christmas far more exciting with the quality of food. I always cook goose – I salivate at the concept of goose at Christmas. I really do love Christmas.

Read our interview with Oliver

"I’ve got a week off over Christmas so I’m taking my family to New York. I’m looking forward to seeing what’s new there."

Read our interview with Russell

"All the years I’ve lived in this country, I’ve dodged my way round not having to go and see the family. My uncle lives in Newcastle. This year, I’ve no excuse – he knew the restaurant was closed for refurbishment, so he got me right at the beginning and said; ‘You’re coming over!’ . I couldn’t say no – so I’m having a family Christmas – a proper Geordie Christmas this year."

"I'll be cooking at Galvin at Windows, something I do every year on Christmas Day (the children and Sara also join me, but not behind the stove! As the Bistrot and La Chapelle are closed on Christmas Day – Jeff cooks at home for the family – his wife, Georgette and two children Daniel and William who are still toddlers and his mother in law, Elaine and our mum, Kathy."

"I will spend Christmas Day with all my family in Australia. We will be celebrating with great friends of ours - he owns a golf club and we're going to have Christmas Day at his clubhouse - in the sun. After lunch we have a cricket game between Brits and the Australians. I'm the only Brit - so it'll be a pretty one-sided match!"

"Ben [Maschler] will be in the pub during the day – we will have some mince pies on the bar and be serving drinks to all those who want to escape the cooking and preparation at home. Sadly I will be away in Jersey cooking turkey with ‘all the trimmings’ for the in-laws."

"It's a very simple Christmas day for me. Now the kids have grown up, I get a relative lie-in until 8am, then it's a busman's holiday! Cooking,eating,drinking and entertaining! But at least I get to have a nap on the sofa in the afternoon."

"Christmas day is a big day and we’re going to have lunch with David and Victoria. Whether it’s Victoria doing the roast or David carving the turkey or Tana making the sauce or me doing the Christmas pudding, we’ll all be helping each other. But it’s going to be mad, it’s going to be pandemonium." (Speaking on the Jonathan Ross show)