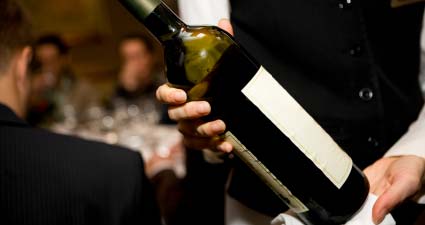 We have to admit, this feature started out as a whinge list of the things that irked us when were eating out in London. But rather than dwell on the negative, we'd love restaurateurs to take this on board when working out how to turn an average dining experience into a memorable one. So here are a few resolutions we’d like to see every London restaurant keeping in 2012...

It’s surprising how many restaurants, having made a big song and dance about sending a sommelier to take a wine order, fail to arrange its arrival at the table before the food is served. So we’d like all restaurants to refrain from serving any course before the accompanying wine has hit the table. And if the diners have ordered a bottle and you haven’t the staffing levels to see when glasses need to be refilled then, for the love of God, leave the bottle by the table. We’re all quite capable of serving ourselves if needs be - we really are.

I will remember who chose the wine and ask them to taste it... even if they are female

In the 21st century, we’re all supposed to be equal. So why is it that, whenever we visit a new restaurant, sommeliers present the chosen bottle to the man of the table as opposed to Ms Hot Dinners who actually selected it? This happens, we have worked out, at about 90% of the restaurants we’ve gone to over the past twelve months. Come on chaps (and it’s always the men) pay attention to who’s choosing the wine and don’t make lame gender-based presumptions.

Long cocktail lists can be as intimidating or exhausting as being offered a massive tome of a wine list. We know London’s experiencing something of a cocktail revival but, every now and then, we yearn for a restaurant or bar that has the courage of its conviction in its mixologist and puts forward a list of edited highlights containing just a few great cocktails. We don’t want to have to wade through pages of intricate, historical detail explaining the journey from conception to cocktail - we’d just like a nice drink, please.

We’re all for surprises on menus (we're suckers for a good amuse-bouche) but if we’ve ordered something simple like a dessert where all the key ingredients appear to be listed but it turns up at the table covered in nuts which we may, or may not, be allergic to, it's a mite irritating.

We can see that restaurant that won't accept bookings are going to be a big part of the London dining scene if 2011 is anything to go by. And it works, it really does, when you're in the middle of town and people can swing by, take a look at the size of the queue and, if they don't fancy it, have a hundred alternate places to try. But if your spot is further out (and yes, we are looking at Ladbroke Grove and Bermondsey) maybe you'd consider having a few tables for the people who'd love to try your food, but can't bear to travel for an hour across town when there's a good chance they won't get a table.

This applies equally for other super-popular, make your reservation at birth restaurants. If you're always that packed, you could probably have a table or two on hand for lucky walk-ins or locals, without making a massive dent in your profit margin.

It’s been covered in great depth by many others, but the state of restaurant websites still leaves a lot to be desired. So, we have a few tips. First, get your website up as early as possible, even if it just has the name and address on there (but don’t put them on an image so that we can’t copy them into google maps or click on the phone number). Next, never let your website designer include music that blasts out the moment you land on your homepage. And if the website doesn’t work on an iPhone (ie you’ve created it in Flash), then whatever you paid that designer was money down the drain.

I will embrace modern technology and have wireless available

If you’re confident that your restaurant is as good as it could be, then you’ll probably be wanting to increase word of mouth. That’s where bloggers and the food twitterati in general come in handy. Trouble is, no-one can tweet about how brilliant your restaurant is, if they can’t get onto the internetbecause you have a basement dining room or are in a mobile blackspot (or for diners who are visiting from abroad). Simply being able to take a quick non-flash pic with a phone and make a one line tweet’s all we’re asking for. Even better - follow one restaurant’s example and put the wireless code on the menu to save us having to ask the waiter for it (he won't know).

A quick plea to restaurant designers when it comes to the loos. Quite often people have made a bit of an effort when they go out. It would be nice then to be able to see what we look like in a full-length mirror rather than a tiny square of fashionably tarnished glass you can’t see anything in. That is all.

I won’t leave customers waiting to pay the bill

There’s been plenty of column space devoted to the dastardly practice of presenting a bill with an open box for a service charge when it’s already been added, but our suggestion is for what happens once the waiter has presented the bill. This is the point when we’re thinking about how big a tip to give you. With every minute that we try (and fail) to attract your attention to pay the damned thing, we’re mentally reducing the amount we’re thinking of giving. Don’t just leave us sitting there, waiting for your eventual return - help us get out of there as swiftly as possible - and turn the table while you’re about it. Everyone’s a winner.

OK, this last one is a bit of a personal one for us. We’ve seen a gradual move towards restaurants opening by “stealth” in 2011 and expect this to continue in 2012. We can only assume this is to try and create a kind of 'only those in the know will be able to eat at my beyond-hip restaurant' hype, but all it results in is people asking bemusedly across twitter – “is (insert “secret” restaurant here) open yet?”  And it can also backfire rather badly too.  So, please don’t pretend we don’t all know about your next opening. Especially here at Hot Dinners towers – we know about all of them...