[SIGPLUS_EXCEPTION_SOURCE] Image source is expected to be a full URL or a path relative to the image base folder specified in the back-end but /features/2016/elements/gallery is neither a URL nor a relative path to an existing file or folder.
0
Shares 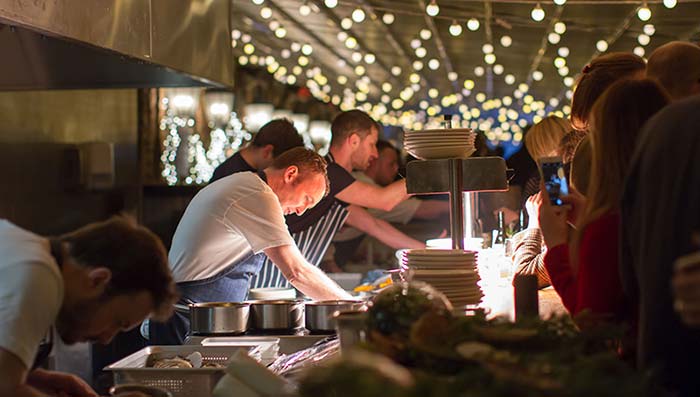 About six months ago, Hot Dinners first sat down with Selfridges for a chat about maybe doing a dinner or two with the idea of celebrating new folk in the restaurant world.

Well that idea, after much deliberating (and as Loyd Grossman would have it, ruminating and cogitating) expanded to become Elements 2016. It would be our first-ever party and an edit of the chefs and food and drink producers we reckoned would be worth watching this year. Mind you, we also had a helping hand from a few friends. Instagram sensation Clerkenwell Boy helped us out by choosing the cocktail category and food blogger Felicity Spector made the patisserie pick.

Tuesday night saw us hosting Hot Dinners readers - and a fair few food writers, bloggers and instagrammers - at the store's Forest restaurant on the rooftop. In total, 150 people turned up to enjoy food from some of the hottest chefs in town at the moment. 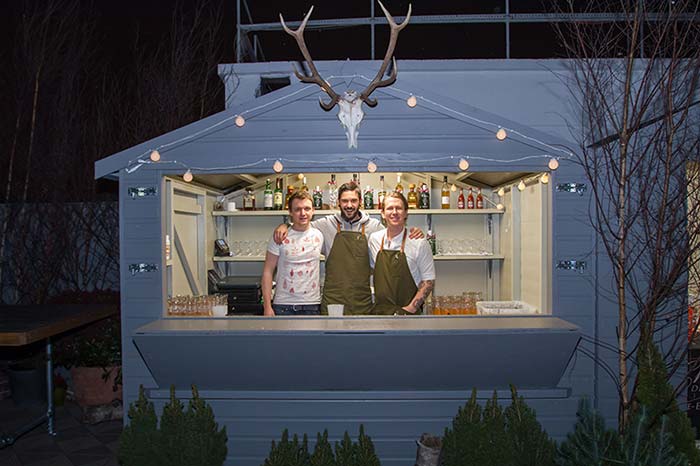 Outside with Iain Griffiths and the welcome drink

The evening kicked off in brisk fashion out on the rooftop itself with guests braving the cold to try a welcome drink from Iain Griffiths (one half of the Mr Lyan cocktail duo). Happily we'd also persuaded Mark Parr from the London Log Company to bring one of his huge wood BBQs up to the roof to ward off the February breeze. They were joined in one of Forest's huts by two chaps from Bibendum Wines talking readers through some of their favourite picks of the moment.

After a blessedly short speech from Gavin and I, everyone was let loose to try the dishes from the six chefs/restaurants. We had amazing cured mackerel with kombu and smoked king cabbage from Leandro Carreira (of Climpson's Arch), scottish scallops being blowtorched by Adam Rawson (ex-Pachamama and YBF Chef of the Year) before being served with Jerusalem artichoke, pine lil-pil and foraged leaves. 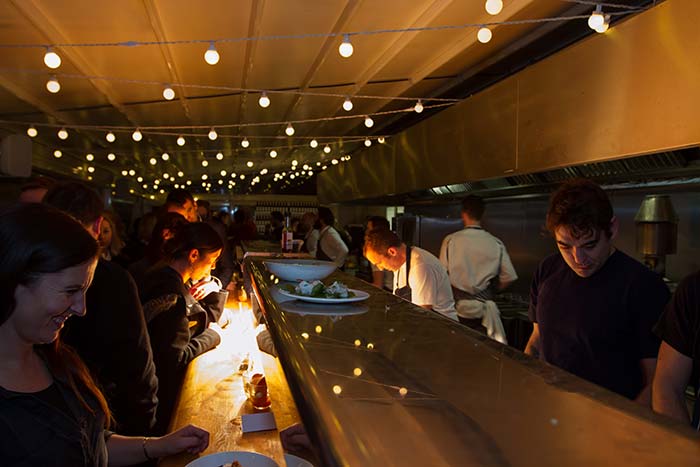 Chefs at the pass

Further along the pass we had Mark Dobbie and Andy Oliver from the hugely-anticipated som saa bringing some heat to the evening with their citrus cured brill served with (naturally) som saa and karrif line on betel leaf. They shared space with Carl Clarke who was also showcasing a dish from his upcoming restaurant, Chinese Restaurant Syndrome - tiki pig, rare breed pork belly cooked in soy caramel with Szechuan chilli and served alongside pickled pineapple, toasted coconut and mandarin segments. And Forest restaurant itself was represented by their Head Chef Steve Wilson whose pumpkin pannacotta got rave reviews.

Last, but by not means least, was Sarah Barber, newly-appointed Executive Pastry Chef at the Cafe Royal who was mobbed by guests wanting to try one of her four mini desserts - her take on Jaffa Cakes, Oreo peppermint macarons, yuzu yoghurt brulee tartlets and raspberry lychee rose spheres. 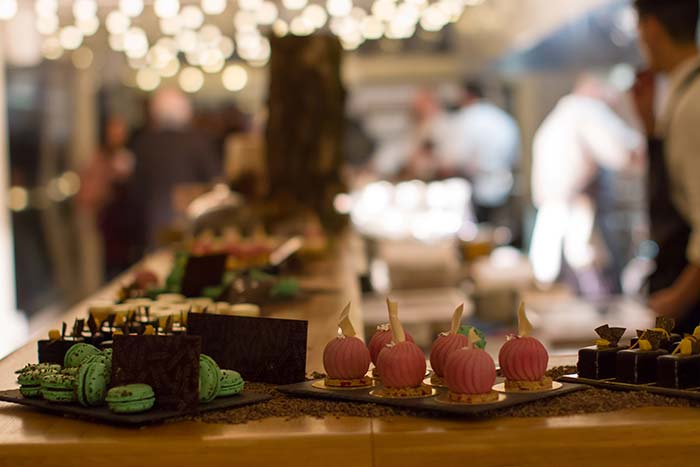 Of course, it couldn't be a party without something to help proceedings along which is where our sponsors, Chase and 1800 Tequila came in. Chase took over Forest's bar, serving up a brand new cocktail Great Chase as well as their gin and tonic. 1800 Tequila brought us their version of a Vampiro.

Alongside them we had all manner of drinks people enticing guests to try their wares - Sandows coffee showcased their nitro coffee, Dalston brewery 40FT and Swiss brewery Biere 1936 were there for the beer fans and three amazing wines were tasted (and shared) by Restaurant Gordon Ramsay's Head Sommelier Jan Konetzki.

And it couldn't be a party without a cracking goodybag. We learned from the masters at OFM that a degree of 'heft' is essential when putting a decent one together, so we hope everyone enjoyed what was in theirs.

So what did we learn from the evening? Well mainly that, just as we suspected, our readers are excellent people. We loved meeting you all there and - judging by all the tweeting and instagramming that went on - it looked as though you had a pretty good time too.

And we all agreed, it wasn't 'would there be another party?' but rather when.

For more on the event see our brochure embedded at the bottom of this page. Elements 2016 was hosted at the Forest Restaurant, Selfridges, 400 Oxford St, London, UK W1D 2JW. Photos by Jason Bailey.

For full details on everyone involved with Elements 2016, browse through our party brochure below.