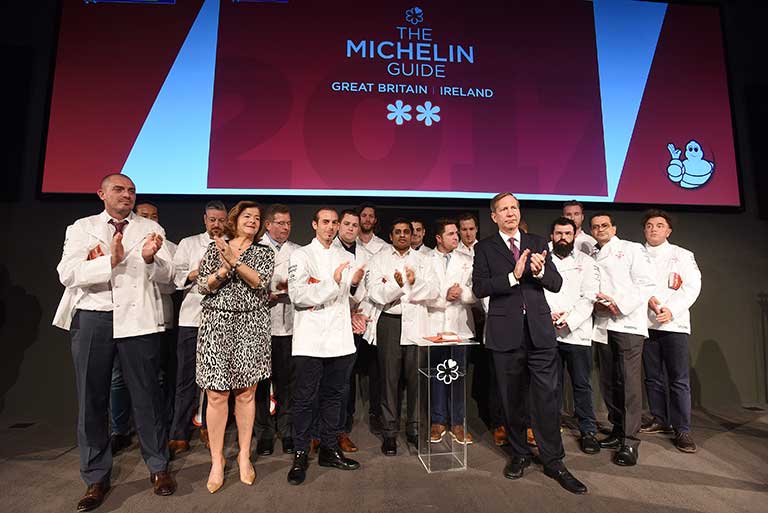 While no-one can predict who is going to win or lose a star when a new Michelin guide is published, one thing is pretty much set in stone. The guide’s publication, and its decisions, will always be met with a storm of newspaper columns and tweets saying a) how this year’s new stars show that the guide is even more out of touch than before and b) no-one cares anyway.

Quite apart from the obvious conflict between those two points, it’s apparent that whether you’re a fan or not of the guide, it’s pretty much impossible to ignore its publication. But leaving aside the issue of whether you rate the guide’s decisions or not, one question would be, does it actually matter?

If you follow any number of foodies, restaurants, critics and chefs as we do, your timeline on Twitter on the morning the 2018 guide for the UK and Ireland is out will be wall-to-wall reaction to the news.

What the stats say...

If you’re after hard facts, on statistics alone we can see that Hot Dinners’ annual Michelin star story is the single most read feature that we publish every year (with the exception of our Coming Soon page, which changes all year round). So if no-one cares, why is everyone looking at it?

When we surveyed our readers a few years back to find out what influenced their decision to book a restaurant* 68% of them said they would be more likely to choose a restaurant which had a Michelin star. Having a star polled higher than a position in the some-would-say cooler World’s 50 Best list and had almost twice the impact of an AA rosette.

What the restaurant industry says...

For chefs Michelin has the benefit of being both a professional yardstick and something which brings the punters in. And some are happy to go on record that they're chasing them. "We will be definitely trying to get back to where we were in Maddox  Street," Claude Bosi said after opening at Bibendum. "Two Michelin stars. That’s what I came here for.”

Likewise over at 108 Garage Chris Denney was brutal about his ambition: "I’ll go upstairs and blow my fucking brains out.” he said if he didn't get the star he was after.

Even to chefs who profess not to be chasing it, Michelin remains happy to award stars. " I never expected to be the owner of a Michelin star restaurant," says Ellory's Ed Thaw. "It was never even remotely an ambition. It’s more a very pleasant surprise rather than an expectation or desire fulfilled." And Jun Tanaka whose restaurant The Ninth got a star just 10 months after opening was pretty darned pleased; "It’s truly an honour to receive this accolade," he said last year.

""Michelin still matters and in my view is increasingly relevant," says David Moore, owner of the Michelin-starred Pied a Terre. "It validates quality and rewards restaurant teams not just across the country but on a global stage."

However it's not something the whole industry agrees with.

“Does Michelin matter? Depends who you’re asking but I feel for the next generation of diners it’s becoming less of a draw and sometimes even a deterrent. But I think a lot of comes with the perception of what Michelin means – customers go (or don’t go) because they have a certain expectation of a restaurant with a star/stars (starched table cloths, expensive tasting menus, hushed dining rooms etc) but there’s a new wave of informality in restaurants now and so often dining rooms and style of service do not reflect the food that is served. We’ve started to see chefs hand back their stars as it’s become both a financial and emotional burden to please the Michelin inspectors. I think if Michelin wants to remain relevant to both the industry and diners, it needs to move forward with the times.” Adam Hyman, founder, CODE Hospitality

“Michelin matters. And as Michelin itself has embraced our changing marketplace - acknowledging ethnic cuisines, more casual establishments, the talented younger generation of chefs - their relevance has increased," says Network London PR Maureen Mills, "Chefs want to be in the Michelin ‘club’ - it’s the finest endorsement of culinary achievement,"

What the bookers say...

“While the Michelin guide may not be a perfect guide for all types of restaurants, it is one of the best indictors for a certain style which takes in various factors like food, service, wine lists and setting, which sits well with our clients." says Emyr Thomas of luxury concierge company Bon Vivant. "Many of them don’t have time to follow the London restaurant scene like we do and therefore they use Michelin as their guide for a certain level of restaurant, as it provides a built-in approval or perceived standard. Ultimately, it's down to the individual's interpretation and appreciation of a particular restaurant, which is part of the joy of eating out, but the Michelin Guide certainly has its place for many clients

What the bottom line says...

While Michelin stars might not have the switchboard-melting impact that becoming the World’s Best Restaurant does, getting one certainly does affect business.

"The effect was instantaneous," says Ed Thaw of Ellory which got a star last year. "Busy dinner the next night with customers ordering big wines and the next two months were totally transformative to the business. I would say business increased by over 40%."

What the detractors say....

It's fair to say though, that there's not shortage of folk who reckon the guide has more than had its day...

“I'm all for dissing the tired old tyre purveyors, but I wish someone would tell the chefs. Especially those helming the kind of outfits whose desperation to score a sparkler makes them about as much fun as a night out with Gordon Ramsay and Chris Hutcheson.” Marina O’Loughlin

"I've always hoped Michelin stars would become an irrelevance. I never expected their Twitter account would be the reason." Chris Pople

"The legacy of 100 years of Michelin is not just an emaciated, inhospitable French table but the legion of score-settling adjective junkies populating unreadable Internet blogs. Nerds who photograph their lunch and use food as a bedroom metaphor for feelings and a simile for friends." AA Gill who REALLY didn't like Michelin.

So does it matter?

Given all the above, how could we conclude that Michelin doesn't matter since the interest and reaction to its publication clearly says otherwise.

Is it perfect? Clearly not. Given some rather odd choices - last year's star for Veeraswamy certainly raised eyebrows - it could do with a hard look at why it's giving stars to some restaurants which have met with a generally poor reception and omits others with many, many fans.

Perhaps what it needs now is do a better PR job with its more populist Bib Gourmand awards, which – when you look at who got them this year – is arguably a better representation of what’s really floating Londoners’ boats at the moment.

This year's Michelin announcement will be, leaks notwithstanding, at 11.30am on Monday 2 October. Follow us on Twitter and we'll bring you the news the minute we have it.