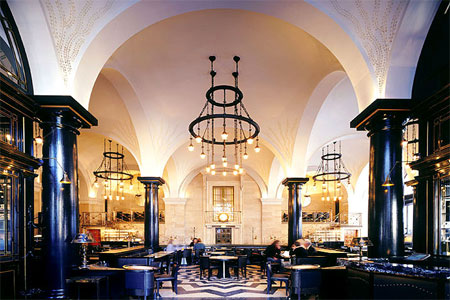 In Hollywood, your power as an actor pivots around whether you can open a movie. In the restaurant world it’s much the same. And there are relatively few people who can open a restaurant in London with as much instant glamour and long-lasting buzz as Jeremy King and Chris Corbin.

To the average diner, they may not be household names, but the restaurants they’re associated with certainly are. For years they were the backbone of Caprice Holdings, running the room at The Ivy like a finely tuned piece of Swiss precision engineering, in which celebrities, agents and power players were the cogs.

When they sold up to Richard Caring and began a new business, no-one doubted they’d do well, but few could perhaps have predicted the durability and perhaps more importantly, the profitability of The Wolseley (three years ago, its turnover broke through the £10m barrier). Just last week everyone from Lucien Freud to Kate Moss, Nigel Slater and Michael Winner came through its doors on Piccadilly. The St James hedge-funders have turned it into their breakfast canteen and, just occasionally, mere mortals manage to nab a seat for tea or even dinner if they’re really lucky.

After a lot of planning, and one major hiccup after they were gazumped by Richard Caring on the old Theatre Museum site in Covent Garden, Corbin and King announced last week that they were  expanding their brand and opening a sister restaurant to The Wolseley on the Aldwych. The new restaurant, believed to be generically very similar, but not called the same will be in the newly-redeveloped No 1 Kingsway building.

Initially, we thought this meant it would take the space of the previous large restaurant on that site –  Bank – but we now understand that The Wolseley Mark II [WM2] will run along the Drury Lane part of the building from where it hits the Aldwych. The original three buildings on the site have now been developed into one huge space and The WM2 will have considerably more window space than Bank did. Another new development for the pair will be the opening of a takeaway section at this new restaurant. Apparently Corbin and King have been asked a number of times since The Wolseley opened if they’d move into supplying the fabulous patisserie and viennoiserie they serve up there – this will enable them for the first time to bring them to a much larger audience.

As for how long you’ll have to wait well, according to an insider, the building itself won’t be finished until late Spring/early Summer 2011 – so the WM2 is expected to open its doors in November. 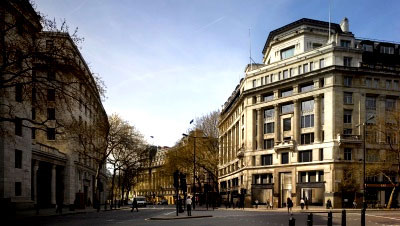 Meanwhile, Corbin and King are also busy working on their first hotel and restaurant project – the boutique hotel 8 Balderton Street in Mayfair. Work on this 75-room hotel will start next year and you can expect to see the doors open sometime in 2013. You can expect Corbin and King’s  experience with the Wolseley to define what 8 Balderton Street offers. It’ll certainly be another all-day dining operation, although we’re told the interior design of the hotel should be quite different to what you see now on Piccadilly.

As to other projects, while they’ve been linked to the new Pinnacle skyscraper, liaising with project manager Khalid Affara on how a restaurant could work there, we understand it’s unconfirmed as to whether Corbin and King will be proceeding.

It’s much more likely that they’ll head at some point across the pond to New York where they’re understood to be actively searching for a site to take the Wolseley to New York. Lucky New Yorkers!