Cameras in restaurants - to snap or not to snap? 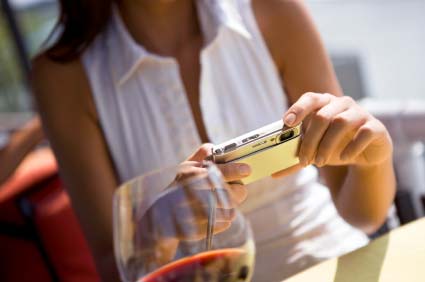 From Polpo to Pizza Express, the hills are alive with the sound of shutters. But how do chefs and restauranteurs really feel about the new food paparazzi?

Once the exclusive domain of the restaurant critic, punters looking to preserve a slice of a treasured meal need only a mobile phone and internet access. Slimmer, subtler technology has become a blogger calling card - whipping out an iPhone, even in the stuffiest of dining rooms, is unlikely to raise eyebrows.

Kang, of London Eater, a London food blog known for its intricate food photography, sees this boom of food snappers as a logical progression of our dining culture – one more memory to treasure and share with others, whether on a blog, or simply via Facebook.

There are only 4 three-star restaurants in the UK... It is logical if some people will want to remember the special occasion - Kang Leung, London Eater

“You’d be surprised how many diners like to photograph their meals at higher end restaurants…and how normal it is to see the average punter photographing a meal at a starred restaurant” he reports. “There are only 4 three-star restaurants in the UK, securing a reservation takes weeks if not months, and it costs upwards of £100 per head. It is logical if some people will want to remember the special occasion.”

Regardless of technology advancements, the more media-savvy restaurants in the city seem to be turning a blind eye to table-side food glamour shoots. The only restriction in regular practice is a no-flash policy, although most restaurants are keen to stress that this isn’t an anti-blogger measure.

“We are a special occasion restaurant, so our no flash policy applies equally to bloggers and non-bloggers” Leonid Shutov, owner of Bob Bob Ricard is quick to point out. “It can be disruptive to the dining room.”

For Chris Pople, blogger and founder of irreverent site Cheese and Biscuits, flying under the radar is a must. A recent blogger dinner at Bar Boulud saw waiters nervously eyeing up other bloggers’ bulky camera equipment, while Pople went virtually unnoticed with his iPhone. Kang recalls several incidents of being mistaken for a restaurant spy as he perfected his shots and was once accused of being a mole for Pizza Hut while photographing in an independent pizzeria.

"My photos are terrible on the blog as a result [of the iPhone], but that’s a price I’m willing to pay” Pople confesses. “ I still think it’s incredibly important to have photos to give people an idea, no matter how fuzzy, of what the plate of food you ate looked like.”

I still think it’s incredibly important to have photos to give people an idea, no matter how fuzzy, of what the plate of food you ate looked like - Chris Pople, Cheese and Biscuits

While new businesses may jump at the chance of valuable word of mouth buzz by eager bloggers, established figures in the industry have been outspoken about their displeasure of food going cold, waiters elbowed away and long waits for tables – all in the name of the perfect shot.

Giles Coren, food critic at the Times, sent shockwaves through the blogosphere in July when he branded photographing food in a restaurant “easily as rude, disrespectful and brutish as making a phone call, scrolling a BlackBerry or dropping one’s trousers in the middle of the room and taking a massive dump”.

Coren may be speaking for a silent majority - the restaurant elite, whether chefs or guests, becoming increasingly irritated as the sanctuary of their dining rooms are pierced.

Antonin Bonnet of The Greenhouse, for one, doesn’t mince his words - the chef of the famously oasis-like space in Mayfair claims that the explosion of food photography has become “OTT and a bit intrusive in recent times"

Others try to appease their new-found camera-clutching following, but can’t help a guarded note of warning creeping in. " It doesn't bother me” says Bruno Loubet , Bistrot Bruno Loubet, diplomatically “unless it interferes with the comfort of the other customers."

No doubt due to criticism like this from established members of the food community, bloggers still admit to feeling self-conscious about taking snaps of their food. A recent thread on CatererSearch debated whether photography in restaurants was rude, or even kosher  without prior permission.

Even the fearless Kang draws the line at toting his camera into certain establishments. “I’ve never taken my camera into Nobu, Hakkassan or Yauatcha,” he is quick to point out, “and these are restaurants which I have visited multiple times over the years.”

We have no problem with bloggers
photographing and spreading the word about their meals - Leonid Shutov, Bob Bob Ricard

So should we all be tucking away our cameras and tucking into our meals? Not necessarily, says Leonid. “Once you've paid for the food, you own it. We have no problem with bloggers photographing and spreading the word about their meals."

Most take great care over their photography - it's a reflection on themselves and their meals. Bloggers represent your everyday guest, but with an amplified passion for food.”

For chefs and business owners, embracing the foodie shutterbugs is a shrewd business move, but the truce between chefs and bloggers may be little more than a marriage of convenience. For now, we’re keeping our eye on the market….and our finger off the flash.

Nicola Piggott is a freelance writer and avid food photographer

Dying for more chef vs blogger action? To read more about the guerilla food wars
across the pond, check out this recent piece from the LA Times.