Tracking the restaurants with new deliveries and takeaways for Lockdown 2.0 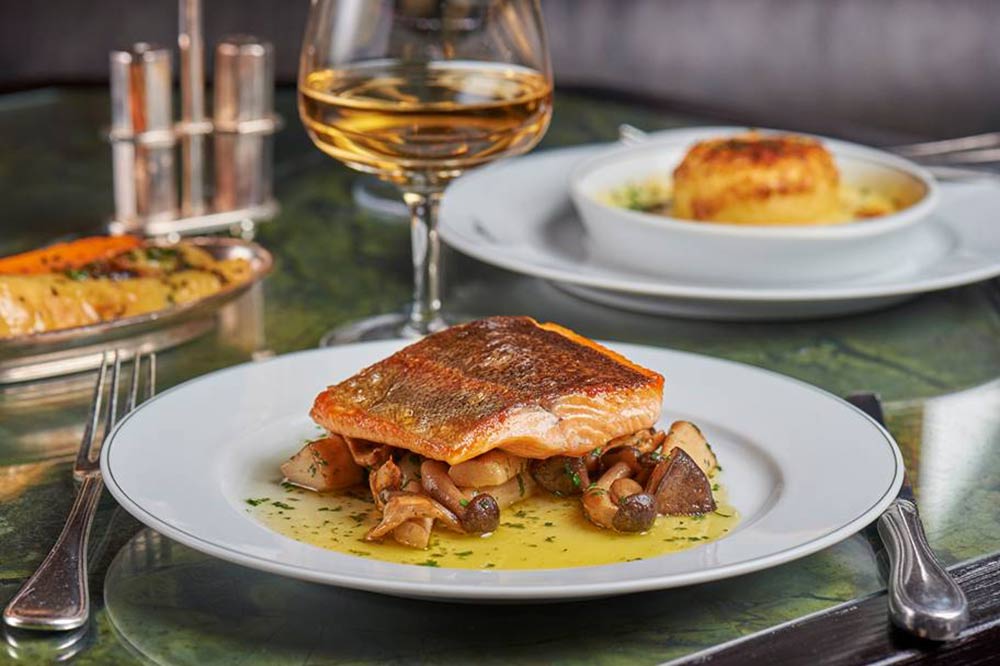 With the UK's second lockdown, new restaurant deliveries are popping up all over London. Here, we'll keep track of the new additions. Don't forget to check out our guide to DIY kits and the best restaurants delivering in London too.

Corbin and King - if you've been out of London and missing out on the delivery service that features the best of all their restaurants - they're now delivering them nationwide.

Helene Darroze (Mayfair) - the two-Michelin-starred restaurant at the Connaught is delivering for the first time, with a five-course menu for two. Dishes include foie gras with celeriac, apple and pear chutney and Vol au Vent ‘A la Francaise’ with lobster and ragout and finishes with a canelé cake.

Dirty Wings (Kensington) - this is the new spin-off from Dirty Bones - all about chicken wings, of course. It's delivery-only to start with although they are installing a new hatch in Kensington for Dirty Bones Grab n go.

Tacos El Pastor (Borough) - have expanded their taco party delivery service, so you can now get tostadas, tacos, margaritas and more to your door nationwide.

Old Chang Kee (Fitzrovia) - are now delivering a Singapore Laksa meal kit by post (or you can get it delivered hot too).

Milk Beach (Queen's Park) - The recently expanded restaurant has launched a new delivery menu of "burgers with character" and "comforting pies" (inc Vietnamese fish curry pie) by Head Chef Darren Leadbeater. Not only that, but they've teamed up with St John so you can get their amazing doughnuts delivered to you in west London.

The Berkeley (Knightsbridge) - you can't stay at the hotel right now, but that doesn't mean you can't have breakfast in bed. They'll now deliver that to you - including the morning newspaper - and you can even order a bottle of Champagne if you fancy mimosas.

Taka (Marylebone) - the latest outpost of the Japanese restaurant has launched TAKA-WAY, and yes, the infamous wagyu sando is available to deliver. They've also launched a deli at the restaurant itself, teaming up with Happy Sky Bakery to sell their pastries.

Chuku's (Tottenham) - known for their Chop, Chat, Chill events (which went virtual during the lockdown) they're now doing new kits, featuring some of the best of their Nigerian tapas.  That includes Jollof Quinoa, wraps of beef/chicken/tofu, their sauces - and you can also add Cassava Fries, cinnamon-sprinkled Dodo (Fried Plantain) and their Chin Chin cheesecake. Order to collect at the restaurant.

Four Legs (Islington) - they were first to act in Lockdown 1,0 and they're back with a bigger delivery menu in 2.0. The set menu includes XO wings, baked beans, fried potatoes and - of course - their amazing cheeseburger. But get ready to order it a few days in advance as it books up quick.

Quo Vadis (Soho) - You can finally get a Jeremy Lee meal delivered to you (and that includes his pie).

Hawksmoor (Air St) - the steak emporium has launched a local at-home service with a much bigger menu than before.

The Marksman (Hackney) - Pies and buns (some of the best in London) are back on offer (and you can freeze them too). They've also brought back Sunday roasts (prepared by them, cooked by you).

Park Chinois (Mayfair) - The Mayfair Chinese restaurant has launched Park Chinois at Home. Part of that will be the Duck de Chine as well as wagyu beef short ribs with black bean sauce.

Opso (Marylebone) - The Greek restaurant has just launched its first At Home menu. Dishes include Spanakopita, spinach pie with feta cheese and handmade phyllo and Lamb Kleftiko. They also have The Funky Burger on the menu - from their 2 Michelin starred sister restaurant Funky Gourmet in Athens.

Le Comptoir Robuchon (Mayfair) - the restaurant that honours the late Robuchon is delivering for the first time. Expect a mix of Japanese dishes and high-end European cuisine. Available on Deliveroo and Supper.

67 Pall Mall (St James) - the fine wine club in St James (which you can join virtually for a tenner) has created a paired wine meal box that will change every week. The first week pairs their Scotch Burford Brown egg & haggis with a 2018 Grüner Veltliner Smaragd and a Dukkah-encrusted fillet of cod, dried apricot falafel, sumac yoghurt, & pomegranate with a NV Viña Ventisquero, Viognier. Boxes are £47.50 per person + £20.00 delivery.

Manteca (Soho) - Chris Leach's restaurant has just launched meal boxes that will starts in December (you can pre-order from 19 November). The kits include smoked cod’s roe, chicken liver parfait and date jam, tortellini in brodo and Porchetta with apple ketchup (with buns). There's Christmas putting to finish.

Salon (Brixton) - Following the success of Levan, sibling restaurant Salon is starting delivery too. There's a new monthly set menu at £59 for two people (initial dishes include their braised venison & potato pie and the chocolate ganache, coffee mousse). You can also pair with a wine from their shop.

Lyle's - Lyles are starting delivery for the first time during lockdown 2.0 - there are two meal kits to choose from and a box of provisions too.

Blacklock - the Blacklock meatboxes are back - so if you fancy chops at home, here's where to go (and there are brand new additions like the all-in this time around).

Davies and Brook (Mayfair) - Daniel Humm's restaurant at Claridge's has kicked off delivery again, with the CFC available again (we tried that here) and a new addition - their famed truffle chicken.

All's Well (Hackney) - Chantelle Nicholson (of Tredwells) opened this pop-up just days before the lockdown - and it's now back as a delivery kitchen. As before, there's a big focus on sustainable, low waste and ‘ugly’ veg ad dishes include roast Mayan Twilight potatoes, aioli & sambal and Horton House lamb ribs, yoghurt, swede kimchi.

Forza Win (Peckham) - Open for delivery and collection, with dishes like a ‘Nduja stuffed whole roast chicken meal on the menu, as well as plenty of pasta, wine and beer.

Spring To Go (Shoreditch) - Skye Gyngell's restaurant is opening a farm shop in Shoreditch on 14 November. They'll be selling produce alongside meals from Spring, and loaves and cakes from the Spring bakery.

Jose Pizarro (Bermondsey) - as well as relaunching takeaway from his Pizarro (which is also open as a takeaway deli), his excellent finish-at-home tapas are available again for delivery nationwide.

Smokestak (Shoreditch) - have re-launched their takeaway and delivery service if you're within 2 miles of the restaurant, with dishes including crispy pigtails, smoked cod roe and potato skins, buns stuffed with native breed pulled pork and more. If you're further away, you can still order their smoked meats and bun kits.

Joy - Stevie Parle's restaurant has been reinvented as a new community hub and one-stop-essential shop. That will include Cobble Lane cured meats, hand-rolled fresh pasta and brilliant pasta sauces from Pastaio, hot take-away food from FLORA, a plant shop, a dessert bar and a fair bit more (they deliver too).

Claude Bosi's Oyster Bar (South Kensington) - His Michelin-starred restaurant is shut, but Claude Bosi has launched a new takeaway menu from his Oyster Bar. Dishes like lobster fish pie, steak tartare, Cornish Skate wing and his very special cheeseburger are all on the menu.

Mr Oyster Boy - Richard Corrigan's delivery service is back up and running (we tried it here) with dishes like the classic Bentley's fish pie and lobster bisque on the menu.

Asap Pizza (Borough) - Flor has relaunched its New York-style sourdough pizza spin-off for delivery during the lockdown, available for both delivery and takeaway.

Ottolenghi has launched a new series of kits with signature NOPI and ROVI menus delivered in finish-at-home form. They're also launching a Shakshuka kit for weekend brunch.

Harrods - Yes, the uber department store is now delivering from the food hall. There are a mix of ready-to-eat and ready-to-reheat dishes available all cooked by Harrods chefs. Dishes include Rigatoni cacio e pepe, served with pecorino and kampot pepper and the popular chicken Caesar pasta salad from The Salad Bar.

Rick Stein - The famed chef has just launched a new At Home range with popular Stein classics like the Indonesian Curry  on the menu. You can even subscribe so that you get a new box every week.

Ampeli (Fitzrovia) - They have launched a finish-at-home Mediterranean-inspired menu that you can finish at home - with main dishes including roasted monkfish, braised fennel, courgette, ouzo aioli and fish soup or slow-cooked Lamb shoulder souvlaki, zhoug, citrus potatoes and feta dressing.

Been missing your favourite street food spots or restaurants? Well a lot of them are making it very easy for you to make some of...
Read more

Over the lockdown, London's food delivery scene improved in leaps and bounds. We've gathered together what we think are the restaurants delivering the most impressive...
Read more