Tracking when London restaurants are reopening for dine-in customers 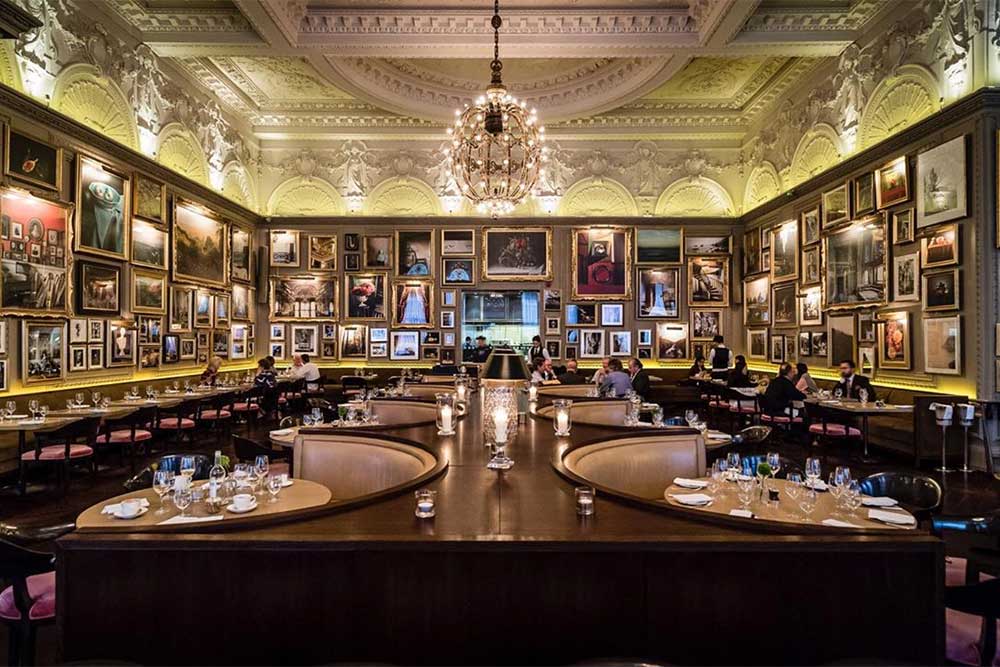 As the lockdown gets ever more relaxed, restaurants are finally reopening. Here's what's opened so far - and also what's reopening soon. Check back regularly as this list is growing larger by the day...

Two Lights (Shoreditch, 17 September) - Chase Lovecky is back with his menu of American classics.

Goodman (Canary Wharf, 29 September) - the city steakhouse is back at the wharf

Bentley's Seafood and Oyster Bar (Mayfair, 1 October) - Richard Corrigan's restaurant will return after a spruce up.

The Petersham (Covent Garden, 1 October) - the Italian restaurant is back, just in time for winter truffle season.

Restaurants that have reopened

Davies and Brook (Mayfair, 15 September) - Daniel Humm and his team will be back in action at Claridge's.

Blacklock City (City, 14 September) - the chops purveyors are back in the City

Ottolenghi (Spitalfields, 10 September) - the deli and restaurant will both reopen

Park Chinois (Mayfair, 10 September) - along with the downstairs club is opening its doors once more.

The Barbary (Covent Garden, 9 September) - the whole bar will be fully bookable.

Brigade (Waterloo, 7 September) - back after repurposing as a social kitchen for the last four months

Pittabun (Carnaby, 7 September) - serving up their hand-stretched and filled pitas.

The Goring (Belgravia, 4 September) - back with a new garden restaurant The Veranda.

L'Escargot (Soho, 3 September) - for the finest of French dining (and snails) in Soho.

On the Bab (Covent Garden, 3 September) - reopens with new dish Honey Mountain Chicken on the menu

Tozi (Victoria, 3 September) - pasta and more is back on the menu in Victoria

The Palomar (Soho, 3 September) - and now you can actually book a seat at the bar (as well as their terrace).

10 Greek Street (Soho, 2 September) - adding Roman-style pizzas to the menu (for takeaway too).

Bocca di Lupo (Soho, 2 September) - launching with a new menu that celebrates all the regions of Italy

Bread Ahead Bakery School (Wembley, 2 September) - need some help with those sourdough skills you developed during the lockdown?

Gauthier (Soho, 2 September) - Alexis Gauthier's restaurant is planning something new when it returns.

10 Cases and Parsons (Covent Garden, 1 September) - the bistro/wine bar and the seafood restaurant opposite debut on the same day

Smith & Wollensky (Charing Cross, 1 September) USDA prime steaks are back on the menu

SushiSamba (City, 1 September) - sushi with a view is back open for business.

Quaglino's (Mayfair, 28 August) - the 90-year old restaurant is back, with entertainment attached.

The Ninth (Fitzrovia, 20 August) - Jun Tanaka is back in Fitzrovia

Patron (Highbury, 14 August) - the French bistro returns to Highbury (they only opened briefly before the lockdown)

Bellanger (Islington, 14 August) - thought to be closing for good, Corbin and King return to Islington

Hakkasan Hanway Place (Fitzrovia, 6 August) - and they're reopening with a special duck dish on the menu.

Tredwells (Covent Garden, 6 August) - with the restaurant now fully owned by Chantelle Nicholson with a small makeover and a focus on British ingredients.

Bao (Soho, 4 August) - They're taking bookings for the first time.

Chuku's (Tottenham, 31 July) - bookings for the Nigerian tapas restaurant open on the 19th.

Larry's (Peckham, 31 July) - Next door to Levan, and from the same people. They opened only a few days before the lockdown.

Ham Yard (Soho, 31 July) - the terrace is already open, this adds the hotel and restaurant.

Galvin at Windows (Mayfair, 1 August) - the Galvin flagship, boasting one of the best views in town

Dinner by Heston Blumenthal (Knightsbridge, 1 August) - Heston's restaurant starts out on the terrace, with the main restaurant reopening in September

Frog by Adam Handling (Covent Garden, 1 August) - after going big with his delivery service over lockdown, Adam Handling's flagship is back

Pollen Street Social (Mayfair, 1 August) - Jason Atherton's flagship restaurant is back, as is 5 Social (across the street) and Social Eating House (Soho).

Tonkotsu (Soho, 1 August) - back where it all started for them (Notting Hill and Ealing open on 31 July and Peckham on 3 August)

Pidgin (Hackney, 29 July) - Homing Pidgin has been a big hit, but now it's time for Pidgin to come home.

Hoppers (Sohi, 39 July) - their original Soho restaurant is back.

Breddos (Clerkenwell, 28 July) - once again serving up some of the best tacos in town.

The Ritz (Mayfair, 27 July) - If you really want to celebrate lockdown being over, grab your best suit and let John Williams cook for you

Blacklock (Soho, 23 July) - with more opportunities to book and enjoy all the chops (City follows on 1 September)

Elystan Street (Chelsea), Church Road (Barnes) and Kitchen W8 (Kensington) - all 23 July - The Phil Howard/Rebecca Mascarenhas group of restaurants are all back.

Manteca (Soho, 23 July) - with added Italian style focaccia sandwiches to take away on the menu.

Brat (Shoreditch, 21 July) - Tomos Parry's restaurant is now spaced out, with reservations only (note that the summer pop up in Climpson's Arch continues).

Guinea Grill and The Windmill (Mayfair, 20 July) - Two of Mayfair's much-loved institutions return, along with many other Young's pubs

Galvin La Chapelle (Spitalfields, 17 July) - The Galvin Bros are back in their listed restaurant and their grand opening will come with a glass of champagne for everyone

Oklava (Shoreditch, 17 July - Oklava Bakery + Wine, 23 July) Selin Kiazim's restaurants are on the way back (without a service charge).

Taka (Mayfair, 17 July) - with a new menu focusing on sushi and sashimi.

J Sheekey (Soho, 15 July) - the Atlantic Bar is back too - as is that very handy terrace space.

Luca (Shoreditch, 15 July) - Italian restaurant from the people behind The Clove Club, making use of their big terrace and conservatory

The Marksman (Hackney, 15 July) - the pub is already open but this sees the return of the kitchen. And their amazing tart.

The Good Egg (Soho, 13 July) - new dishes include Challah Brunch Buns and Chicken Shawarma (as well as their babka, of course)

108 Brasserie (Marylebone, 14 July) - and you can now book their heated, covered outside terrace

Flat Iron (London Bridge, 14 July) - the first of their steak restaurants is back, with added bookings.

Helene Darroze at the Connaught (Mayfair, 14 July) - The (recently revamped) Michelin starred restaurant is back

Plu (St John's Wood, 11 July) in advance of the main restaurant reopening, they're opening La Terrasse outside with its own food and drinks menu.

Smoking Goat (Shoreditch) - time to get those chilli fish sauce chicken wings again. No standing at the bar for the moment, though.

Dehesa (Carnaby, 10 July) - the charcuterie and tapas bar is reopening.

Gold (Notting Hill, 10 July) - they'll be making good use of the Alfresco space out the back

Rotunda (King's Cross, 10 July) - the restaurant and bar are open - along with their massive canalside terrace.

Barrafina Dean Street (Soho, 9 July) - as with KX, will be taking bookings.

Blacklock (Shoreditch, 9 July) - for all your chops needs. Soho follows on 23 July and City returns on 1 September

Petersham Nurseries (Covent Garden, 9 July) - that hidden courtyard will be a hot ticket

Quo Vadis (Soho, 9 July) - both the restaurant and club are reopening and members can now book a space in the club

Salon (Brixton, 9 July) - Nicholas Balfe is back in Brixton Market.

The Sea The Sea (Chelsea, 9 July) - the seafood bar is coming back, taking reservations for groups of 1, 2 or 6

Wright Bros (Borough Market and Battersea, 9 July) - the top seafood and oyster bars are back.

Brigadiers (Bank, 8 July) - a phased reopening for this City restaurant starting with terrace dining before bar opens on 15 July.

Goodman (Mayfair, 8 July) - the top steak restaurant is back in its flagship location, Beast follows on 22 July

Kitty Fisher's (Mayfair, 8 July) - back with outside space, a few ground floor tables and takeaway to start with.

The Oystermen (Covent Garden, 8 July) - a slightly reduced menu but plenty of UK and Irish oysters.

Jose Pizarro (Spitalfields, Bermondsey - 8 July) - the king of tapas opens in the city and also his tapas bar. Pizarro follows on 15 July.

Quality Wines (Farringdon, 8 July) - and this time they're taking reservations for the first time.

A Wong (Victoria, 7 July) - Andrew Wong is back with one of the best dim sum menus in town

Carousel (Marylebone, 7 July) - starting a series of 4 menus, inspired by all the chefs that have cooked in their kitchens and kicking off with Mexico

Clipstone (Fitzrovia, 7 July) - from the people behind Quality Chop House

Discount Suit Co (Spitalfields, 6 July) - First opening for whole-hire only, following up with the standard bar in August.

Noble Rot (Holborn, 6 July) the whole space will now be a restaurant with no walk-in wine bar for the moment.

40ft Brewery - (Dalston) - Their taproom is opening (outside only) and they'll have a special "6ft" beer on offer.

Aqua (Regent St and London Bridge) - Aqua Kyoto and the terrace as well as the high-rise restaurants in The Shard, Aqua Shard and Hutong, are back (Aqua Nueva follows on the 16th)

Benares (Mayfair) - The high-end restaurant was one of the first in Mayfair to deliver during the lockdown and is back open on the first day.

Bistrotheque (Hackney) - back for their legendary brunch

Bone Daddies - all sites will be reopening, as will their other restaurants Shack-Fuyu and Flesh & Buns

Bright (Hackney) - From the team behind P Franco - with a new set menu inside and a la carte on the terrace.

Camino (Bankside and King's Cross) - the Spanish restaurants reopen with new seasonal additions to the menu.

Caravan (King's Cross) and Vardo (Chelsea) - both from the caravan group and both with lots of alfresco space (the entire restaurant can be alfresco in Vardo's case).

Casa do Frango (Shoreditch and London Bridge) - The Portuguese restaurant is back, adding a large outdoor terrace in Shoreditch

The Cheese Bar (Camden) - all your cheesy needs met

Chisou (Mayfair and Knightsbridge) - both of the Japanese restaurants will reopen for diners.

Coal Office (King's Cross) - they already have a grab & go offering on, and expect them to make big use of the large terrace

Chutney Mary (Mayfair) - the famed Indian restaurant is back along with sibling restaurants Amaya, Veeraswamy and all Masala Zone restaurants.

Corbin and King restaurants (Various locations) - They're starting with The Wolseley, Colbert, Brasserie Zedel and Fischer's (all from 5pm)

Dalloway Terrace (Bloomsbury) - the flower-covered terrace is bound to be a coveted spot.

Darby's (Vauxhall) - from the people behind The Dairy, with an expanded outside terrace

Eggslut (Notting Hill) - the eggy restaurant will be open for dine-in too.

The Harts Group is reopening in King's Cross, with  Parrillan and Barrafina, Casa and Plaza Pastor all launching at Coal Drops Yard. And Barrafina will be taking reservations for the first time.

Humble Grape (Battersea and Islington) - starting up again with two of their wine bars.

Hush - (Mayfair) - the popular brasserie has turned its courtyard into an English country garden for the summer.

The Ivy - (Soho) - the Caprice group may have closed Le Caprice, but the Ivy will be back up and running

Lardo (Hackney) - back with their amazing pizzas

The Laughing Heart (Hackney) - Tom Anglesea is back with a fixed menu, but no late-night offering just yet.

LPM - aka La Petite Maison (Mayfair) - with their enviable terrace space seats too, of course

Mariage Freres (Covent Garden) - for all your tea needs

MEATliquor (Islington, Covent Garden) - Back for burgers and all the House Grog you can take.

Morito (Clerkenwell & Hackney) - both outposts are back for sherry and tapas

The Ned (City) - two of its ten restaurants, Kaia and Millie's Lounge, are opening today

Novikov (Mayfair) - High end Italian and Asian restaurant will be reopening, but they'll also be keeping their alfresco food stalls too.

Officina 00 (Old St) - after supplying pasta throughout the lockdown, they'll be back up and running.

Pachamama (Marylebone) - the Peruvian restaurant is back, while the Shoreditch outpost joins it on 8 July

Tonkotsu (Haggerston, Selfridges, Stratford) - The ramen and gyoza restaurant starts with three of its London locations.

Vinegar Yard (London Bridge) - the huge outdoor space is back, this time with bookings and table service. Very handy for summer.