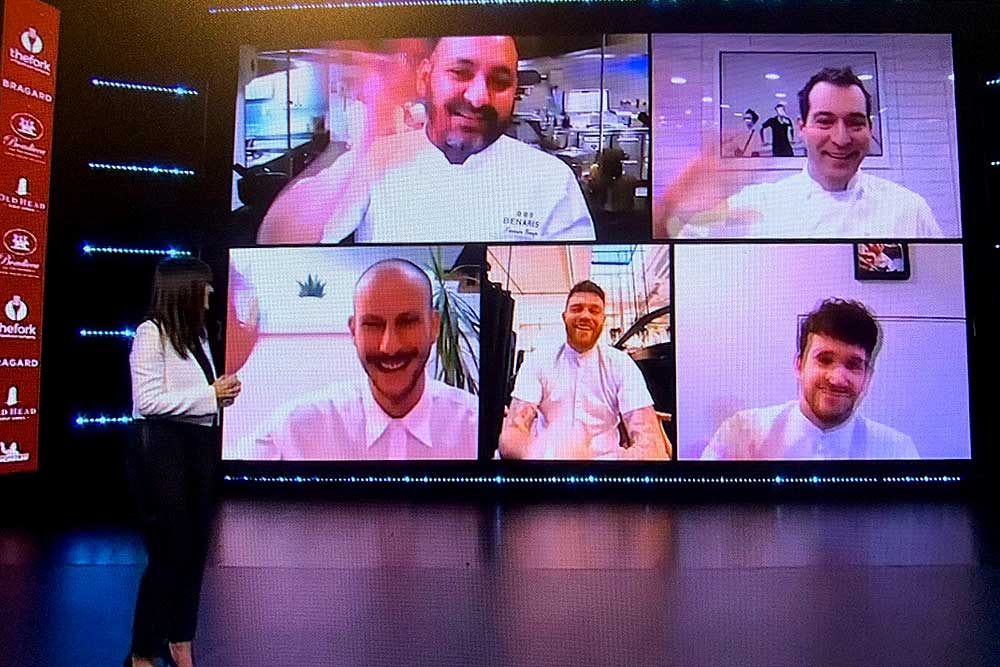 The reveal of any year's new Michelin stars is always going to be a contentious event. But tonight's announcement of the new stars in the Great Britain and Ireland 2021 guide was even more of a hot potato (relevance of that idiom to become clear...)

With rumours swirling about Michelin demoting as well as promoting restaurants during such a dire year, we all wondered just how it would go down. As it turns out, it was an amazing year for London's chefs and restaurants, with loads of restaurants getting recognition on all levels by Michelin.

The ceremony itself kicked off with a bit of a surprise. Given how clunky previous events had been, the arrival of Davina McCall as the presenter suggested that this year things were going to be different. And so it proved to be. There were interviews with chefs and restaurants over how they reacted to the issues faced by the hospitality industry during Covid. Then all the chefs of three Michelin-starred restaurants popped up on the feed to offer advice to those about to receive stars. "First of all congratulations," said Gordon Ramsay. "Now the real work starts because you've got to maintain those stars."

After a lot more faffing, finally, Gwendal Poullennec, International Director of the Michelin guides, gave us what we were waiting for, announcing the new Michelin stars for London.

As you might imagine, the whole thing became pretty emotional. "It's been a lifetime's work," said Story's Tom Sellers. "So to sit amongst such other great chefs is amazing." As for Darroze she said: "I'm thinking of all the women in the kitchen and want to let them know that everything is possible - just believe in what you are... because anything can happen." SoLa chef Victor Garvey probably spoke for many when he said: "I'm going to go off and drink my bodyweight in Pinot."

Also announced were this year's Bib Gourmands, London saw seven restaurants pick up Michelin's award for "for their very good value" and they were

There were also Green Stars, a brand new accolade - "awarded to restaurants which have stepped up in their commitment to sustainable gastronomy". 23 restaurants in the UK and Ireland were picked for this inaugural year, four of them in London:

As for the deletions, the vast majority of those were for restaurants that have closed. But it was bad news for a few that hope to reopen. Umu was demoted from two to one and both Aquavit and Social Eating House lost their stars in a move that seems unnecessarily harsh, given the current climate.

So, that's it for another year. It's been an absolutely lousy 12 months in the London restaurant business and we, for one, are just happy that there's been some good news for the many talented chefs and restaurants in this city of ours. And what a year for women, with both of London's new three Michelin-starred restaurants headed up by female chefs. Things are looking up!

More about the Michelin Guide Great Britain and Ireland 2021

See our full guide to the new Michelin starred restaurants