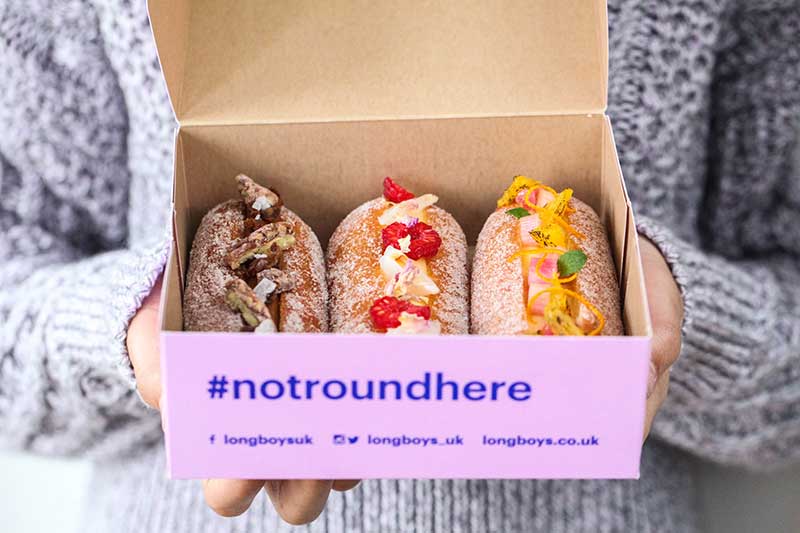 London's doughnut producers are the equal to anyone's (if the award-winning doughnuts we tried in Miami the other week are anything to go by). So anyone new coming into the scene is really going to have to bring their A-game. But a look at the credentials of the folk behind new doughnut purveyors Longboys shows they've thought of that already.

The duo behind it are the former Group Pastry Chef for the Hakkasan group, Graham Hornigold, and Heather Kaniuk, former Executive Pastry Chef at the Mandarin Oriental and Shangri-La at the Shard. So yes, it's fair to say they ought to know what they're doing. And to make their wares stand out in a crowded market, they've gone for finger doughnuts as their point of difference.

Longboys finger doughnuts will be made with light brioche bases and options will change every month according to what's in season. The fillings do sound good, such as Rhubarb, custard and orange; Sticky toffee, date and pecan or Peach compote, lemon verbena cream and toasted almonds.

If all that's not enough to sate your sweet tooth they'll also be making their own soft serve in house.

Their first stall will open in Boxpark Wembley tomorrow, and they've already set their sights on opening a permanent shop in central London later this year.

Launch offer: 50% off all doughnuts on opening day