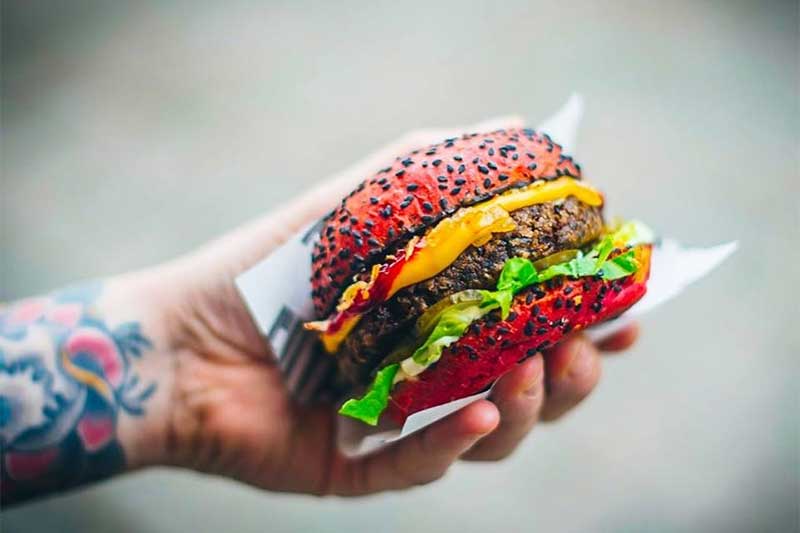 In a nutshell: Healthy food that tastes anything but

Summing it all up: Gizzi Erskine and Rosemary Ferguson team up to take on the fast food giants with their vegetarian burger chain

After waiting patiently to find out when Pure Filth would open, Gizzi's only gone and snuck it under the radar. Her burger joint FILTH is opening today in Shoreditch for a three month residency.

In a post on Instagram she told followers, "The FILTH burger is finally here! We’re very excited to announce that our burger joint is opening on Friday at 5 pm on the 4th of January...After years of secret development we’ve achieved a pure miracle: Fast-food without the junk!"

They've taken over the site that used to belong to Dirty Burger on Bethnal Green Road for three months.

As for what's on the menu, Gizzi's promising a burger that "tastes as filthy as an old-fashioned cheese-burger, but it’s plant-based all the way!" It features black beans, black quinoa, non-GMO soy mince and a special blend of umami paste, in a beetroot and sesame bun, and is served with crispy fried onions, beetroot ketchup, roasted garlic aioli, romaine lettuce and cucumber pickles.

Described as "a fresh new food concept delivering nutritiously decadent cuisine", Pure Filth first popped up at Tate Britain in December, as the result of 18 months of research by Gizzi and partner-in-crime, nutritionist Rosemary Ferguson. The pair met a festival, "We're both hedonistic," said Gizzi when Hot Dinners spoke to her last year. "I've worked with lots of nutritionists before but she's the first I made a friend of."

Things really got moving when the two of them went for a detox. They spent a lot of time in the sauna, chatting and realising they both wanted the same thing - "nutrient dense food that was unexpected, but healthy. We're both passionate environmentalists," says Gizzi, "and knew the meat industry survives in part due to the fast food industry and burgers". They're after folk who are concientious eaters first rather than necessarily vegetarian or vegan.

So the pair came up with a menu that featured a veggie burger Gizzi could be proud of. "I didn't want it to be a bean burger or something too earthy, and the texture was really important."

If you're a member of Soho House, then you might be interested to know that the brand's signature burger should be available in all seven of their clubs for the next three months.

Launch offer: For the first three days they're giving away 50 free burgers on a first come first serve basis. And they'll also be hiding tickets in meals for free burgers.