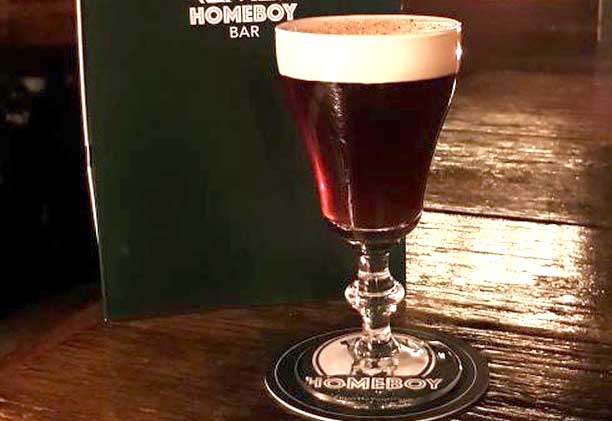 In a nutshell: Irish bar opens on Essex Road

Summing it all up: Expect Irish food, drink and hospitality at this Islington bar which is serving up everything from cocktails featuring Barry's Tea to curry chips and Tayto crisps.

As anyone who's read Hot Dinners for a while now, you'll know two things - that we're based in and around Islington and that we're of Irish extraction. So it feels a bit like Christmas come early for us to learn that an Irish bar has just opened on Essex Road, serving up all manner of lovely-sounding Irish-influenced cocktails and food.

Homeboy is the first bar from the Irish duo Aaron Wall and Ciarán Smith who've worked everywhere from Callooh Callay through to The Dorchester and the Waldorf Astoria in New York as well as the London Cocktail Club, which is what used to be on this site. They say they're aiming to "bring the best of warm, laid-back Irish hospitality, home comforts paired with delicious drinks and playful sinful food to London.

Certainly, the cocktail list does much to showcase Irish producers - expect to find drinks using Irish whiskey, beers and they'll also pour a decent pint of Draught Guinness. Cocktails include an Irish Coffee made with The Dead Rabbit Irish Whiskey, Coffee Cream, Demerara Syrup and A Wall of Coffee Bitters and (the one we most want to try) - Teaandabiccie which uses Roe & Co Irish Whiskey, Benedictine, Barry's Irish Tea, Clarified Milk and Hobnob Syrup.

On the food front, they've roped in Ciarán’s Dad and Aaron’s mum to help out with recipes like Da's Irish Stew served with Ma’s brown bread. There'll also be poutine, meat and cheese boards and - most importantly - they'll be serving up curry chips. And yes, there'll be proper Tayto crisps. Meanwhile, Aaron's dad has been over helping them set up the bar - handily he's a master builder.