Core, Bibendum, Sabor and Dinner by Heston are London's big winners at the AA Awards 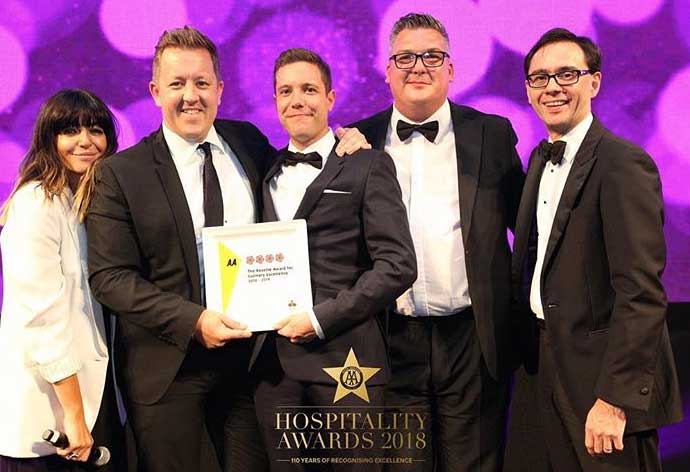 Last night's AA Hospitality Awards at Grosvenor House saw a number of London chefs and restaurants given reason to party into the small hours. Those with sore heads this morning probably include teams who picked up the following gongs.

"Twenty years on from arriving in the UK, Claude’s passion for his craft remains undiminished as does his commitment to the stove."

London Restaurant of the Year - Sabor

"Delivers an authentic regional experience via its trio of dining options; from diminutive tapas bar to dining-counter restaurant facing a high-energy open kitchen."

"A clear champion of the art of professional service it is formal in style bucking the trend for the mass move towards the relaxed but in no way is it stuffy in its approach."

"An excellent hotel, with so much detail and no expense spared. In short, nothing comes close in London at this moment in time."

"He will be greatly missed by the industry but leaves a wonderful legacy with all those he has worked with over the years."

"It comes as no surprise that they are our Customers' Choice Award winner this year."

The awards also presented a number of rosettes to London restaurants as follows:

And two London hotels became one of the UK's 5 Red Star Hotels - Four Seasons Hotel London at Ten Trinity Square, and the Shangri-La Hotel, at The Shard, London.