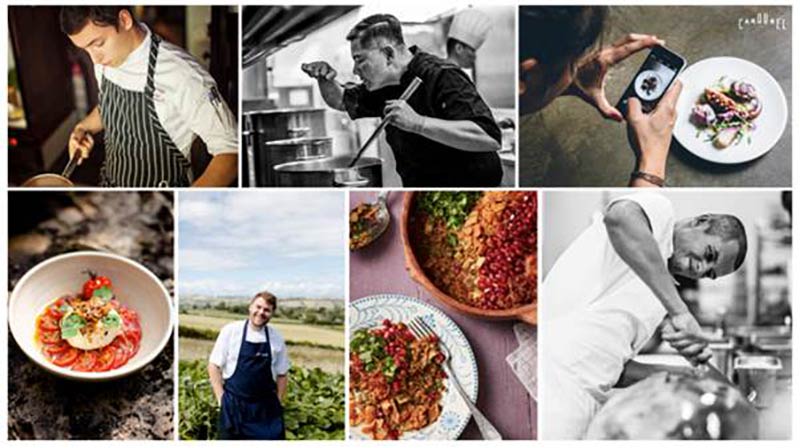 Carousel has just revealed a new Autumn line-up and, as ever, it's pretty impressive. If you're not familiar with Carousel, it's an events space plus a restaurant with a difference in Marylebone. They have an ever-changing list of chefs who take over their kitchens - and often attract some impressive talent from both the UK and abroad. It's also often a good chance to spot chefs who might be opening their own restaurants.

So with that in mind - here's what we've got to look forward to - starting with the current residency...

Who: Expect Palestinian and Middle Eastern that you'll have encountered in her cookbook, Palestine On A Plate. She's previewing dishes from her next book, Baladi (Arabic for ‘My Country’).

What's on the menu? ‘Muttabal Shamandar’ - beetroot and yoghurt dip flavoured with dill and chilli, ‘Harak Usba'oi’ - a rainbow of coriander and lentil stew with fresh pasta and tamarind, and ‘Sticky Za'atar, Chilli and Pomegranate chicken with Herby Tabbouleh and Maftoul Couscous’.

Who: This is Emily Heron (Head Chef at Ottolenghi) and Marc Summers (Berber & Q, The Palomar, Ceru). Together they are Bubala, (a Yiddish term of endearment) and they'll feature an emphasis on sharing dishes, which “just so happen to be vegetarian”.

Who: Siblings Josh and Holly Eggleton have been awarded a Michelin star for seven years in a row at The Pony and Trap. They celebrate produce from the Chew Valley and the pub’s own kitchen garden and orchard together with chef-proprietor Josh (who's a regular on Great British Menu)

What's on the menu? A menu of refined West Country dishes.

Who: Chef Antonieta 'Neta' Fernandes Manhão will be coming to Carousel this October to showcase the unique cuisine of Macao. Half-Portuguese, half-Chinese, Chef Neta is a champion of Macanese cuisine, which blends Portuguese and Chinese flavours with those from Africa, India and South East Asia, in one of the world’s first fusion foods.

Who: Brazilian Rafael Gomes was at NYC at Eleven Madison Park and Gramercy Tavern, before moving to France to work under the tutelage of two Michelin-starred chef Mauro Colagreco at Paris’ celebrated Grand Cœur brasserie. He now has his own restaurant Itacoa (named after his favourite beach back home in Brazil) where he incorporates flavours from his Brazilian heritage, his time in New York and his more classical French training.

What's on the menu: His take on ‘Pão de Queijo’ – a traditional Brazilian comfort food, ‘Wild Coley with Carrot, Ginger and Orange’ and his signature ‘Passion Fruit and White Chocolate Crémeux’.

Who: He's winner of the San Pellegrino Young Chef UK & Ireland award 2018, and Chef de Partie at Michelin-starred Aniar in Galway (we hail from the area and this is one of the residencies we're really excited about). He's running a menu that celebrates the Irish food scene.

What's on the menu: ‘Oyster and Sea Weed’ and ‘Pork Belly glazed with Hawthorn Berries and Plum Umebushi’. He's previewing dishes he hopes to put on when he opens his own venture on the Wild Atlantic Way (that's the west coast of Ireland if you were wondering).

Who: Yaroslav Artyuk is Head Chef of Kanapa, one of Kiev’s top restaurants, and modernises and refines traditional Ukrainian fare. Using innovative techniques, Yaroslav’s Carousel menu will bring a lightness to typically heavy Ukrainian meals and is joined by fellow Ukrainian chef and friend, Olia Hercules.

Who: Following training at École Grégoire Ferrandi and experience at Saturne, Chez Aline and Septime, Céline Pham has been working in Paris showcasing her contemporary take on Vietnamese cuisine.