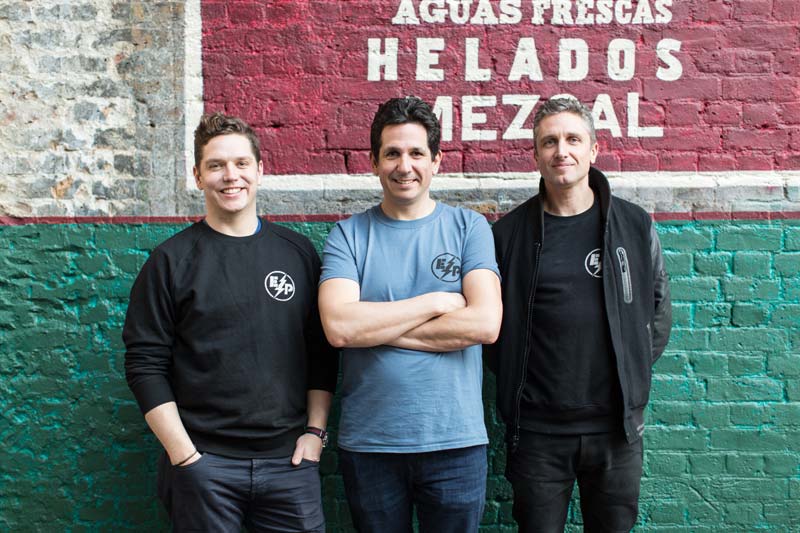 Sam, Crispin and James - the people behind The Drop

With one of the UK's most successful crowdsourcing drives behind them for their three interlinked ventures at Coal Drops Yard, the Hart Bros are now releasing details about their newest venture there, The Drop wine bar.

In particular, we now have details of the team that's involved there. Running things front of house will be General Manager Yvonne Neilson (formerly of The Marksman Public House and The Ten Bells). In the kitchen you'll find Karan Ghosh (formerly Head Chef of Thomas’ at Burberry. And working alongside restaurateurs Sam and James Hart and Crispin Somerville on the wine list will be curator Aimee Hartley.

Some other things to know:

Hot Dinners gatecrashed a wine tasting session for the new bar with Sam, James and Crispin Somerville to quiz the trio about their plans.

Hot Dinners: How did you decide that the third space at Coal Drops (after Barrafina and Casa Pastor) was going to be a wine bar?

Sam Hart [SH]: So we were looking at the different spaces that we’ve got and The Drop is these three actually very beautiful Victorian arches. Originally, we’d slightly mooted the idea of it being a cocktail bar before we’d r

eally discovered the space. And we’re like, “Oh hang on a second, this doesn't really look like a cocktail bar, it feels like you’re in some beautiful old Burgundian cellar somewhere. It just seemed to say quite loudly this space needs to be about wine.

Crispin Somerville [CS]: The landlord was keen for us to do something beery and that was mooted for about 2.3 seconds but we find craft beer a bit farty and we just don’t really love it as much as we love wine and there are insanely exciting things going on in wine.

Can you give us some details on the space itself?

James Hart [JH]: The Drop will be underneath the terrace of Barrafina, so it will feel more cellary because it’s a bit darker. And this bit [unlike the rest of Coal Drops Yard] was actually not a coal storage spot but where they saddled up the horses that used to come in with the barges. So you've got amazing wooden details that come out of the wall for horse bridles and collars. Actually, for health and safety - to stop people bumping into them - we're going to put antique horse collars back on them.

On the floor, originally would have just been dirt, but we are putting in a terracotta floor which felt right for the space. We’re trying to get it twinkly at night and really cosy. A really nice space, whether there are just two of you or a larger group.

Did you take inspiration from anywhere in particular?

JH: We went to places in New York and places in Paris and obviously a lot around London, but stylistically we’re really more governed by the space itself.

CS: In terms of concept, there are a couple of places that we absolutely would aspire to being as good as. For me, 40 Maltby Street is one of the great restaurants in London and I think their wine philosophy is tremendous. I think we aspire to be as good as them.

The current London wine scene is going crazy, so it certainly feels like a good time to open a wine bar...

SH: You couldn't call us pioneers but at the same time, yes the scene is exploding and really exciting. What’s nice about it is that it’s been driven by the younger crowd, so it’s not old farts on Pall Mall drinking their claret.

JH: Whilst we’re not pioneers, we’re hoping we will bring a fresh angle and a new way of making wine approachable to all sorts of different people. We’re expecting it to be a super eclectic mix of people at Coal Drops. If you look at King’s Cross it's already an amazingly rich mixture of young and old and corporate people, people who are visiting, people who come on Eurostar. One of the exciting things for us is - how do you curate a list and how do you come up with a style of service that really engages all those people? 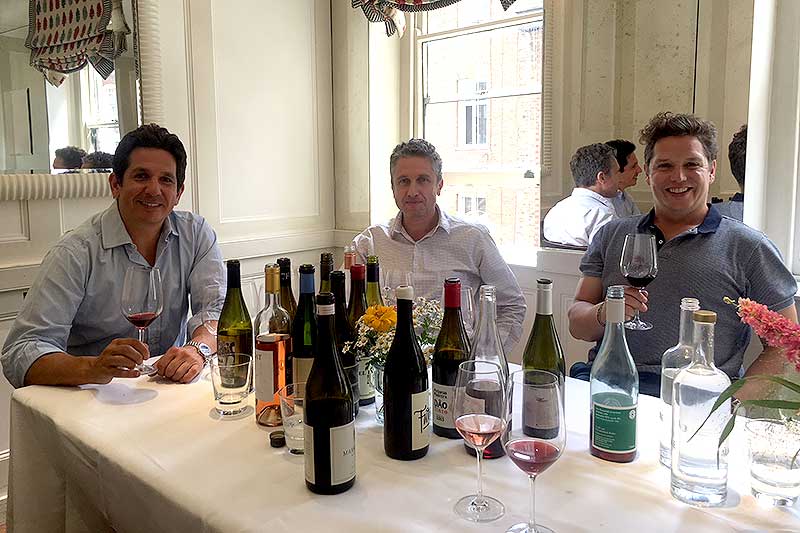 Sam, Crispin and James crack on with the wine tasting for The Drop

You're currently in the middle of picking what's going on your list. What is driving that decision?

SH: Well, certainly minimal intervention or not heavy-handed wine-making. I think we all like a certain freshness to our wines, so it’s not going to have those giant, great, heavy blockbusters.

We'll be focusing on small producers - the real people who’ve actually got their hands dirty making it. There are very little or no wines from giant co-ops or faceless corporations. There's an exciting link between the drinking and making of wines. We love the idea of that individuality of wines; you know, there’s a guy and there he is up on his mountain and he’s put all his passion and love into it. A lot of them we would’ve met, a lot of them we’ll be trying to meet, and hopefully we'll bring them over to do events.

JH: We'll be trying to engage people with wine before they ever pick up the menu and hopefully they won't ever need to.

SH: There'll be three ways of choosing the wine - the number one way would be to engage with bartenders and waiters and have that exchange about what you want. Second is we'll have a beautiful display with some amazing bottles that’ll arouse curiosity. Then thirdly, and least interesting, is actually picking up the physical menu.

CS: I love walking into a wine bar and telling people what mood I’m in and getting the wine to match that. we absolutely want to remove the awkwardness and stuffiness out of wine bar life.

SH: The sommelier with the huge bible, that's the very thing we're trying to get away from.

So how regularly do you think the list will change?

SH: The list will be short because I don't think too much choice is a good thing. So 20 whites, 20 reds, some rosés, natural wines and fizz, plus a black book and some bin-ends. We’re not planning wholesale seasonal changes or going down the route where it gets torn up and you start again, but it will be naturally evolving.

What about your own wine? Will that be on there?

SH: We're undecided actually. We'll be serving it upstairs in Barrafina so it's quite nice that the two places are entirely separate.

JH: We might do something particular for the Drop - an own brand wine. 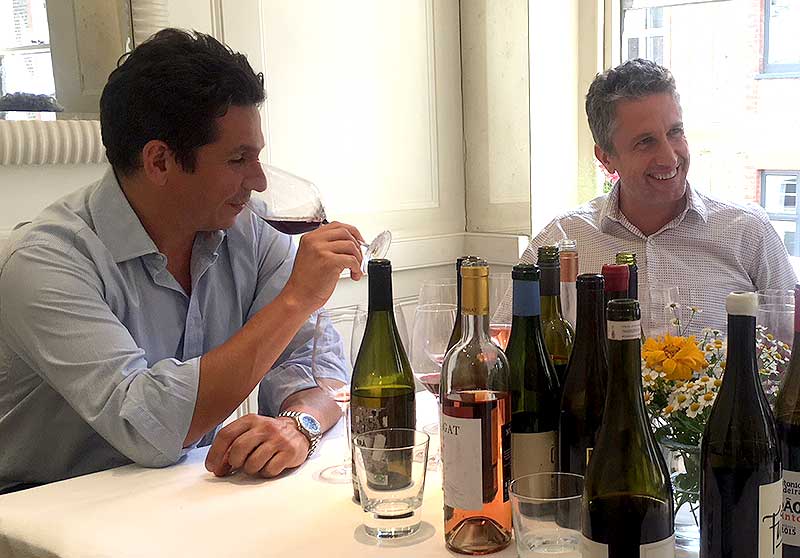 You both met and smashed your crowdsourcing target (it was £750k and they eventually raised £2.4m). How did that launch day pan out for you?

SH: It was humbling. It’s one of the greatest days in the office I've ever had. We’re living in difficult times for the restaurant scene. It’s tough out there, as everyone knows. To go out - and you slightly put your neck on the line - it's all so public, you know. It was like waking up in the morning and seeing the first set of great reviews on a new restaurant, it felt like that, but actually voted for in hard cash by the public, so it’s almost better. It was completely fantastic.

What do you ascribe that success to?

SH: Most of the subscriptions came from existing Barrafina and QV customers. And that was what was actually so nice about it. These were our customers saying, 'You know, I love those restaurants. I believe in it as a company,' and then putting their money in. Either we make a success of it and when I go down the pub I'll never have to buy a drink again or we'll have to move to the Outer Hebrides if we cock it up.

So what's going to be on the menu at The Drop? You've said it'll "privilege the best British seasonal ingredients". But then Karan will be limited by the fact that the space has just two induction rings and an oven.

SH: Our influence would be Jeremy [Lee], Fergus, 40 Maltby Street - if you took you took those three, then I suppose it'll give you a pretty decent idea of where we’re trying to head.

CS: We have also been influenced by some of the limitations that the space provides. So really not having extract, you look at people like P Franco. There's also this wonderful wine bar in Paris called La Crèmerie and they're doing amazing things with one induction hob.

SH: Is it a challenge? Of course, it is. Are we going to have delicious barbeque food? Definitely not because we don't have the facility to do that. But could you go and have a really delicious lunch or dinner? We think you definitely will be able to. So bar snacks, plenty of small plates and some larger dishes.

CS: We think wine is a very convivial experience and it will be easy to order four small dishes and sit around the table quaffing and eating.

Can you give us any examples of specific dishes?

SH: We'll have an oyster cart outside so we'll be doing rocks and natives and maybe some clams. Then Crispin discovered this amazing cecina in Spain, so we'll be hand-slicing that.

CS: Jeremy's done a beautiful chilled soup which would be great in summer, and in winter they'd be coq au vin as a heartier dish and some well-thought-out cheeses. There are some stunning things going on in British cheese and we’d like to promote that. But not to be fundamentalist about it. We’ve got a very overtly Mexican offering, we’ve got a very overtly Spanish offering and it’s our responsibility to ensure that there is a distinctly different offering in this one wine bar.

And you're opening all the restaurants on the same day?

JH: Yes but the Barrafina terrace won't be opening until the spring.

You're working with Aimee Hartley, founder of Above Sea Level and Genuwine, the wine and RnB dance party on the list. Why did you bring her in?

CS: We’ve been up to our ears in our tasting for the past 72 hours - it's been a really fascinating snapshot of the wine industry at the moment and Aimee's bringing a lot of these wines to us. She was introduced to us by my cousin Signe [Johansen]. We loved the way she spoke about wine - she just had a really good wine vibe about her.

SH: We have a classic palate, but for Coal Drops without going wild we ought to be pushing some boundaries. Aimee’s contribution is to open our eyes to some of the new and more exciting and more challenging things that are going on. But in the end, you've got to close your eyes and ask yourself, 'Is it delicious?'

More about The Drop